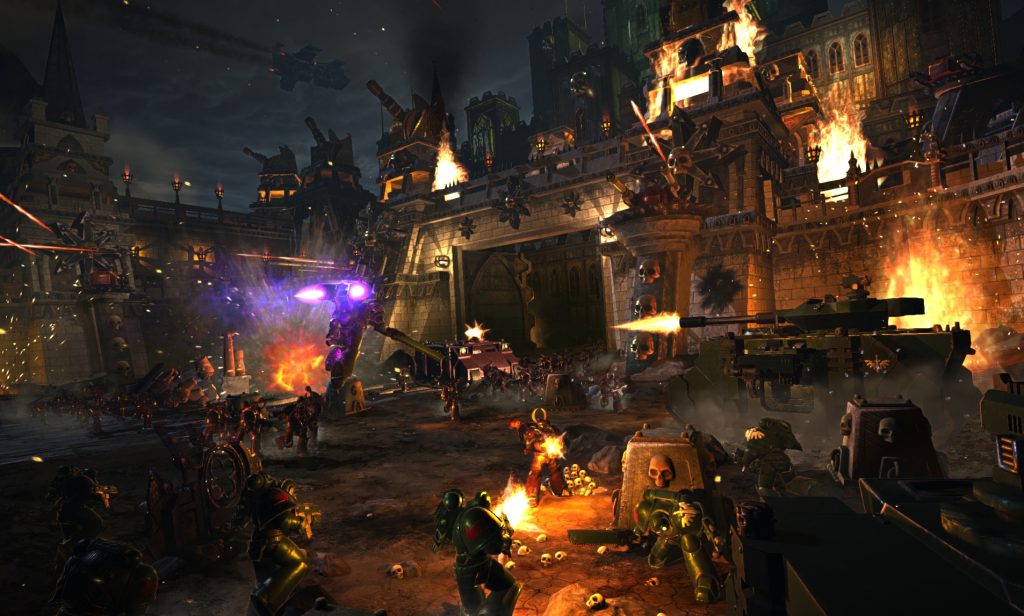 The prospect of an online multiplayer Warhammer 40k shooter is something I’ve been dreaming about for a while. I’m one of those guys who loves the 40k universe despite never having played the tabletop game: Dawn of War hooked me on the setting, and subsequent forays into the video game iterations of the universe have intensified the addiction. So when I heard that Warhammer 40k: Eternal Crusade was coming – and that it was going to be a Planetside-esque multifactional romp with Space Marines, Eldar, Orks and Chaos Space Marines all going at it in gore and glory? I was eager, excited, and ready to chop some humies inta bits. What I discovered was, the Planetside aspect was nowhere to be seen, and all the promises and assurances came down to a character-filled but buggy objective-based multiplayer shooter.  With a cash shop.  That earlier elation took a powerfist to the gut, but a bit of hope (and entertainment!) still lingers.

Let’s focus on what Eternal Crusade delivers. First, there are four factions to choose from – the Space Marines, the Chaos Space Marines, the Eldar and the Orks. It’s a respectable starter pack of factions, and as a guy who’s always drifted between Orks and Space Marines, I consider myself satisfied with the selection. Each faction has their own set of equipment, their standard (and customizable!) weapons loadouts and more, with the store page itself boasting ‘1000s of iconic weapons and equipment’. The real point here is that, for a third person multiplayer shooter, Eternal Crusade is coming out of the gates with a decent amount of flavor-filled variety. This is a boost both for people looking for some diversity in gameplay, as well as for 40k fans – though there’s inevitably going to be disappointment that one’s favored faction isn’t present. Fans of the Tau or the Necrons will be left out in the cold for now.

Isn’t this gorgeous? God, it’s beautiful. Don’t get used to it, you have to really play with your massively expensive computer settings to pull views like this off.

The game is graphically impressive, managing to sell a satisfyingly immersive ‘feel’. Maps really highlight the 40k charisma, with big intimidating buildings slathered with skulls and gothic architecture that the universe is known for. I’ve mostly played on the Ork side, hearing my allies automatically belt out appropriately accented mutterings and sayings in the thick of battle. I’ve jumped into the air with a big crazy rocket strapped to my back, and I’ve slammed a jagged-toothed blade against a Space Marine’s shield – and I’ve got to say, it all felt satisfying. In terms of immersion, Behaviour Interactive seems to have things down pat. Part of that is because the 40k universe just lends itself so well to meatgrinder tactics on massive 60+ player maps, complete with both sides hiding behind cover, making mad dashes towards enemy fortifications, and dying. In fact, I spent most of my time doing the last part, usually hanging out at the bottom of the score list for my side of the conflict.

Gameplay itself is rather standard, and something we’ve seen before on the PC: heavy on the objective-based team v team, complete with 60+ players all fighting over control points on the map. There’s a cover system in play, and the game plays from the third person perspective. Melee is present as well, and something I am uniformly bad at – the Eternal Crusade is a little thin on the tutorial side of things, with training largely coming in the form of letting new players run around on an enemy-free map to experiment. That’s particularly strange, since this is a deeper game than a typical shooter: there’s different kinds of loadouts available to use, equipment available, upgrade points to spend and a leveling system. But, insofar as the pure game experience goes (as opposed to searching around online for guides), very little prepares you for the depth that’s on offer.

There’s probably a good reason for that lack of a suitable tutorial mode: that’s the kind of thing that tends to come when a game is finished, and in a few ways, Eternal Crusade sometimes doesn’t feel like it’s clawed its way out of beta yet. When I logged in today to get in some shootin’ before the review, a warning flashed on my screen informing me to consult the Steam page to see the workaround for login issues. Ominous sign, that, especially since this is a game that’s been officially released since late September. Jumping in to play as an Ork, I had some fun repeatedly rushing some Space Marine fortification, until I noticed a problem. One of the vehicles was positioned out on the map to serve as a spawn point, and it had unfortunately gotten stuck. I sat around, watching the pilot helplessly drive his vehicle back and forth, struggling to turn and leave the small cul-de-sac it had gotten wedged inside of. After it seemed impossible for him to get his vehicle out, I tried to hop outside – and was immediately killed due to spawning inside of a wall. After this happening a good 5 or so times, I just decided to hoof it from way back at the original map spawn point.

In the 40k universe, every hallway is constructed with one thought in mind: “we will have to kill people here eventually.”

Little problems like that seem to be par for the course with Eternal Crusade, with players reporting a slew of bugs and glitches. To be fair, the team has been hard at work trying to squash these problems, and things seem to be improving – and I’ve still been having fun playing the game. But for a title which is officially released, costs $49.99, and which also features an in-game cash shop? The current state of the game just isn’t impressive. Especially since, more than anything else, Eternal Crusade is an online multiplayer experience – so if there are problems related to the login server, there are problems playing the game, full stop. Little things like this pop up repeatedly, from strange response lag when trying to browse the world map (which shows all the areas each faction ‘controls’ as well as current flashpoints), to non-intuitiveness when selecting loadouts, and more.

I’ll be blunt. Warhammer 40K: Eternal Crusade is a game which still needs a good amount of work, despite the fact that it’s already released. Add in the fact that it’s a multiplayer-centric game with a $49.99 price tag, and comes with a cash shop besides, and the whole affair seems a bit insulting. At the same time, it’s clear that the developers are continuing to work hard to polish it and turn it into the game it not only should be, but clearly can become under their care. If they can pull their collective acts together and make playing this game a smooth experience – and maybe add a nice, informative tutorial besides – then this is going to be a game with a good future ahead of it. But as of right now, save for the diehard 40k fans with an action itch to scratch, it’s very hard to recommend. Wishlist it, keep an eye on it, and wait for either a sale or news of a big improvement to the experience.

Warhammer 40K: Eternal Crusade shows a whole lot of promise as an exciting team-based multiplayer shooter. But 'promise' is less than what's demanded when we're talking about a game which is released, rather buggy, and not always as intuitive as an action-heavy game should be. At $49.99, it's hard to justify the investment until the price drops or the game is patched up respectably, but the potential and the fun it offers is real all the same.

Victor Grunn has been a gamer since the days of single-button joysticks and the Atari 800XL. When not lamenting the loss of the Ultima series or setting people on fire in Team Fortress 2, he's an aspiring indie game developer and freelance writer.
Related Articles: Warhammer 40K: Eternal Crusade
Share
Tweet
Share
Submit