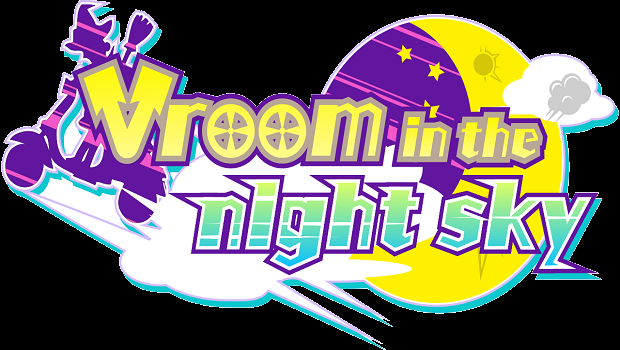 There are some games that are pretty entertaining regardless of quality. QWOP and Big Rigs: Over the Road Racing are titles that venture into the “so bad it’s good” territory, sit there, and wait for the accidents to happen. They’re not necessarily great games, but they’re good for a laugh or two. Likewise, Poisoft’s Vroom in the Night Sky is something that should by all accounts be terribly bland, but ends up becoming a slightly palatable title due to its cheesy translation and game-breaking unlockables.

This is the first screen you see when you start up the game, and it’ll probably set the tone for the next hour or so.

In Vroom in the Night Sky, you play as a magical girl who rides a motorbike in different locales. She uses her magical powers to collect stardust and go through Keystars (star-shaped rings you need to grab) in order to unlock a magical gate and complete the stage. That’s basically it; it’s a racing game without opponents (though more on that later), and no way to fail out. Using a boost feature too much will exhaust your fuel levels, forcing you to find an emergency helipad to replenish your gas tank. While there isn’t any in-game health bar or some other gauge to penalize you for bumping into objects in a stage, you will lose some stardust if you crash into something.

Everything is literally magical.

Included with the North American version of the game (as well as patched in other territories) is a driving school mode, where you can hone your skills with your motorbike. It’s pretty basic, but this is a functional tutorial, and it’s also a great way to get some easy stardust (since you get a big pile of it the first time you clear a mission in the driving school). Stardust can be used to purchase new bikes and other vehicles, which handle and speed up differently.
Because friendship is magic, there exists another magical girl that appears after about minute in each stage. She’s introduced like a looming enemy trying to destroy you, but she becomes nothing more than an insignificant icon because you’ll never really see her unless you try. In fact, your sidekick can attack your opponent if you go near her, and she usually goes down in one hit.

Your opponent’s a feisty one, alright.

The presentation of the game is… disappointing, to say the least. The textures and graphics look straight out of a mid-2009 Wii title, and the sound design is forgettable and mediocre. The stages are big and sprawling, but there’s an emptiness that makes the game a boring slog for most of it. Most of the vehicles putter around stages, and the feeling of boredom is exacerbated due to the stages not really containing anything of value. The handful of locales are over in minutes, and you’ll probably be finished with the game in a little over an hour. This game screams disaster, and it seems like there aren’t any redeeming qualities at all for this game.
And then the airplane happened.

Even failure can be magical! What a positive message here!

There are in-game achievements which increase the longevity of Vroom in the Night Sky, though not by much. However, within these achievements are unlockables such as new stages and even new vehicles. And this is where Vroom in the Night Sky shines: its utter silliness. I happened across a “magical airplane” while working on getting a time trial achievement, and I sped through everything in literally thirty seconds, complete with jerky movement and dodging buildings. Since objects are static, I just kept plowing into trees and bridges as they stood stationary, my only penalty being a scant few gasoline points and stardust reduction. You can also unlock a bench, a car, and even a broom (because you know what magical girls are, right?), which oddly enough are more fun to control than any of the bikes or motorcycles you can buy. The special vehicles are wonky, unwieldy, and super-fast, and these make the larger yet plain stages much more tolerable when you can zip around on a park bench. There was even a level simply named “The Sky”, with airplanes made up of more airplanes.

The general translation is unintentionally entertaining as well. While it is serviceable, and some of it gets in the way of its own fun, there are a lot of translation errors that end up making the game pretty cheesy (such as “gotten stardust” instead of literally any other word at the results screen or the available “Magical Naked” bike in the shop). In addition to the inconsistent translation on in-game menus, there are also some conversations on the side of the screen that play out while you race; the three characters spout out some incomprehensible nonsense that really needs to be seen to be believed. They have no bearing on the stage itself, but I have to admit, the non-sequiturs really had me chuckling. The whole thing almost reached Katamari Damacy levels of zaniness, and I really wished Poisoft embraced this type of silliness rather than shy away from it.

This is hilarious considering that there are no camels or cacti here.

Vroom in the Night Sky

While Vroom in the Night Sky isn’t a spectacular game, there’s no denying that I had some fun with it for the short-lived time I spent with the title. I just wish it could be more over-the-top with its presentation rather than dull and unoriginal for most of the ride.

Elisha Deogracias is an aspiring accountant by day, freelance writer by night. Before writing for Gaming Trend, he had a small gig on the now defunct Examiner. When not being a third wheel with his best friends on dates or yearning for some closure on Pushing Daisies, he's busy catching up on shonen manga and wacky rhythm games. Mains R.O.B. in Smash. Still doesn't know if he's a kid or a squid.
Related Articles: Vroom in the Night Sky
Share
Tweet
Share
Submit