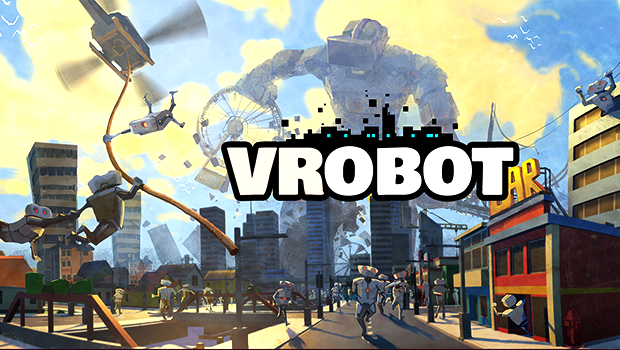 Have you ever wanted to wreak destruction without being labeled the bad guy? Ever wanted to flatten an entire city in the name of the greater good? If so, then you need to get your hands on VRobot, a delightfully pointless game where earth has been overrun by robots, self-driving cars, and self-flying planes. Humanity has been driven from the face of the Earth, taking refuge in a massive space station, and has loosed their ultimate weapon in order to take their planet back: You. Or more specifically, the giant robot which you transform into, thanks to the wonders of virtual reality.

The premise of this game is incredibly simple: you are dropped into the middle of a city that you must totally destroy within a given time limit, armed with either a tractor beam, a tornado gun, or just your own, bare robot hands. Don’t worry, this isn’t a spoiler; this is the synopsis displayed on the game’s main menu. Destroying a city within an allotted time causes an exit door to spawn within the level (brace yourself, Game of Thrones fans, the sign says “Hold the door”) and unlocks the next level or set of levels. Tools are not universally unlocked, as each level has its own restrictions around which parts of your arsenal you will have access to.

There’s a whole lot of destruction waiting for you

While crushing cities and throwing planes with your bare hands is fun for a while, I quickly found my preferred weapon of destruction to be the tractor beam, which allows you to both pull objects, including buildings and boats, to you, but also to push them away, leveling anything in their path. Destruction in this game is not entirely without strategy. Different buildings flash green, indicating that they are extra volatile. Destroying one of these buildings results in it a huge explosion which flattens everything in the surrounding area, so earning high scores often requires constant scanning of the area, searching out these prime targets. While the ability to easily pluck skyscrapers out off their foundations is fun, and creating whirlwinds of mass destruction with the tornado gun are entertaining, I found that nothing quite compares to the power of the tractor beam, and I wasn’t alone in that assessment.

Half the delight with this game is that it’s just as much fun to watch as it is to play. Music and sound effects are minimal, so headphones are not a requirement. By mirroring the game to a nearby TV, we put on hilarious demolition demonstrations, which drew quite the enthusiastic audience and helped encourage a few people to dawn a VR headset for the first time. One person, lost within the the world inside visor and headphones, was making his own tractor beam sound effects, while another woman cringed and recoiled in fear as the tractor beam pulled whole buildings towards her at high speed. Audience participation resulted in some hilarious exchanges, including multiple exclamations of “All your base are belong to us!” as well as the following exchange:
“Why don’t you crush that plane?”
“No!! Someone paid good money to be on that flight!”
“And they didn’t pay good money to live in that house you just flattened?”
“No, because everyone left the Earth and is living up on a space station now.”
“So… then no one actually paid to be on that plane?”
“Shut up and stop using logic on me, I’m a robot!”

While there are currently only eight levels in which to wreak havoc, which is a little limiting at this moment, developer Luden.io makes no secret that there is much more to come, making the future of this title all the more exciting. The game itself already promises that robot battles coming soon, and VRobot even has its own Trello board where you can vote on upcoming features, including a laser gun, clubs and hammers, and the ability to use both hands to rip a building in half. Time challenges, in the meantime, offer a good bit of replayability. While trying to best your previous time, or show up a friend, is fun, there is also a good bit of joy in just taking your time inside cities. Stacking wrecked buildings, trying to bowl with a ferris wheel, plucking self-piloting planes out of the air Godzilla style, and even picking up and tossing the tiny robots who have displaced humanity are all a surprisingly fun way to waste some time.

Low res and brightly colored, VRobot is quite atmospheric and pretty

You move by either physically moving around your playspace, if the area is large enough, or by using the circle pad on the front of the controller, which casts a blue line which will teleport you to a targeted area. The graphics are brightly colored and low poly, but they work well and do not distract from the setting. In fact, despite the low resolution, I found that the game triggered that slightly dizzy feeling which comes with a fear of heights on occasions when I accidentally aimed my movement cursor, causing me to land on top of small buildings instead of open ground. While it can be played either standing or seated, standing proved to be our preferred method, as it made stomping about the city and stooping down to pick up robots and small buildings that much more visceral. The game is incredibly fun in short bursts, but because it lacks an overall story as well as extras to unlock, is not likely to trigger gamer addiction.

VRobot is a unique virtual reality experience which allows you to engage in wanton destruction while still playing the role of the good guy. Low resolution, brightly colored worlds allow you to wreak havoc with your bare robot hands, or with the aid of tractor beams and tornado guns. Its eight levels leave it a little short on gameplay, and a lack of overall plot and extras means it's not that addicting, but it is incredibly entertaining in short bursts, and developer Luden.io promises much more to come, including robot battles. A highly entertaining and destructive romp, VRobot is a great way to waste a few hours.