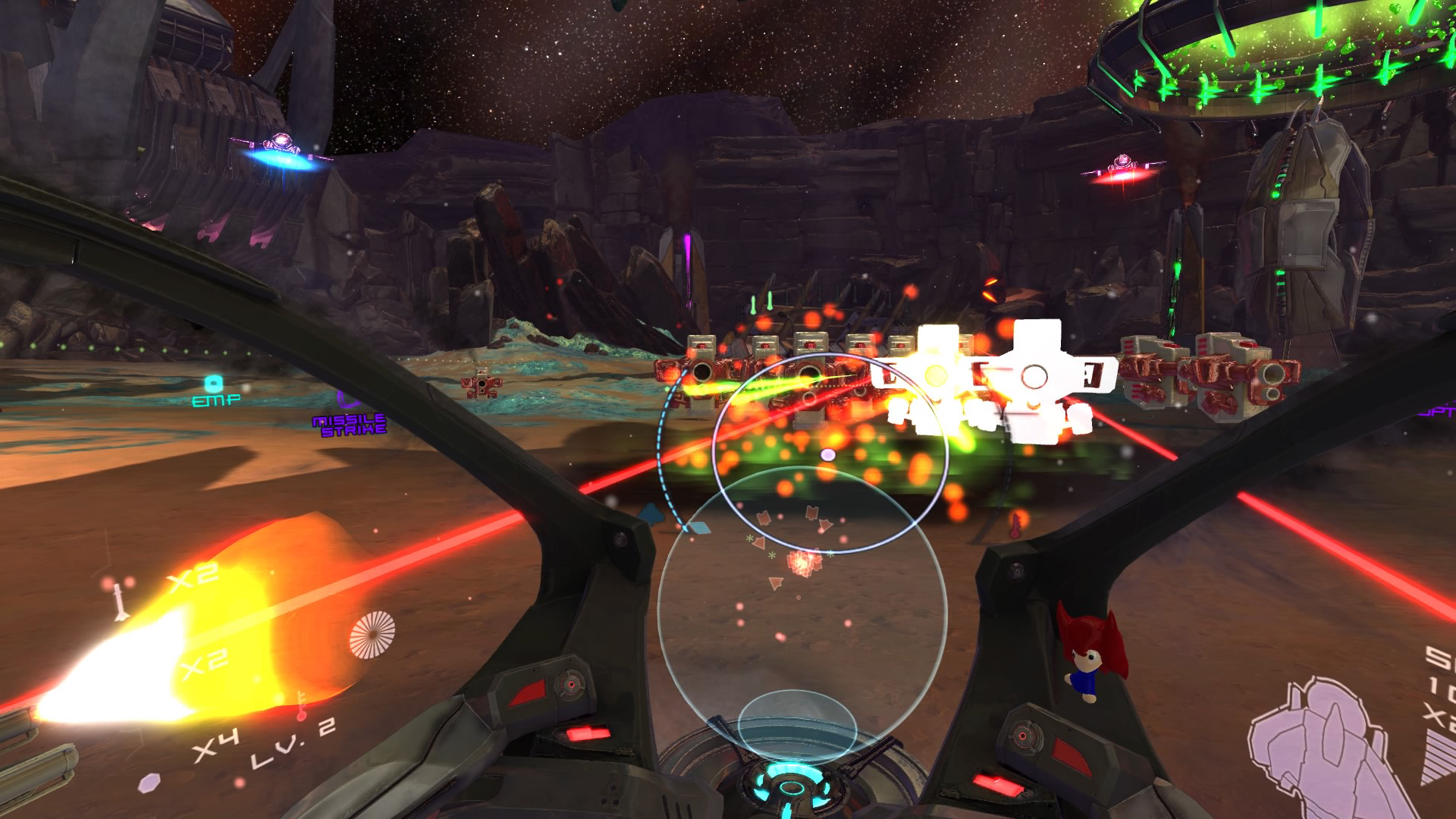 Super Stardust Ultra VR is what would happen if you strapped a pinwheel firework to a firecracker and jammed it directly into your eye. A cacophony of color and sound, the game’s predecessor, Super Stardust Ultra was a staple of the PlayStation 3, with the newest version by the same name coming to Playstation 4 just last year. Now formatted for VR, this spherical-based shooter sports a new mode called Invasion, but will it be enough to make you buy it twice on the same platform?

To dig into Super Stardust Ultra VR you need to understand that what’s on display here is two fairly unrelated products welded together. Just like it was on the PlayStation 3, and again on PlayStation 4, Super Stardust Ultra gives players high-speed twin-stick gameplay as their ship roams around planetary orbs shooting rocks and alien invaders. What’s different here is that the whole thing is now in virtual reality space.

Same as it ever was.

The explosion of color and sound that was once confined to your HD television is now a cacophony of particles cast about your head. You can move your head around to see to the sides, tops, and bottoms of the planets, though it does require a bit more head movement than I anticipated. Ultimately, while it is neat, Virtual Reality doesn’t add anything new to the equation, other than the perspective shift. The same could be said for the base game which has only made incremental changes since its original introduction in 2008.

What is new in Super Stardust Ultra VR is a new mode called Invasion. Played in a first person cockpit view, the game puts you in the seat of a tank repelling an incoming invasion. It moves the game from third person shmup to a first person shooter.

Just looking at this makes my head hurt.

The primary controls for movement is the DualShock controller. Using the left stick for movement and the right stick for camera controls, you’ll also use your head for targeting. Looking at a target allows you to lock missiles or dispatch familiar foes with guns. The targeting system works remarkably well, adding a bit more immersion to this re-imagined perspective change.

Super Stardust Ultra VR is set up as a Horde mode, tossing the player into an enclosed valley of sorts and then throwing an ever-increasing number of foes into their path. Enemies approach from land and sky, forcing the player to constantly look around to spot incoming enemies. As a nausea sufferer, after about 15 minutes of play I felt violently ill. I had my wife try it (she has no problems with motion sickness) and she complained of a headache and nausea in almost the same amount of time.

We are guessing, but both of us came to the same conclusion — the lateral movements of the ship, combined with the full freedom of head movement and vision, contributes to the assault on the senses. Somehow it works fine in games like EVE Valkyrie, but on the semi-flat plane of Super Stardust Ultra, it’s too much to process.

The root game of Super Stardust Ultra VR is everything you remember, with a new (albeit small) twist. The new Invasion mode, on the other hand, is a shallow nausea-inducing horde mode that does little to elevate the game. If you are looking for the VR game to showcase your new headset, save yourself the literal headache and skip this one.

Ron Burke is the Editor in Chief for Gaming Trend. Currently living in Fort Worth, Texas, Ron is an old-school gamer who enjoys CRPGs, action/adventure, platformers, music games, and has recently gotten into tabletop gaming. Ron is also a fourth degree black belt, with a Master's rank in Matsumura Seito Shōrin-ryū, Moo Duk Kwan Tang Soo Do, Universal Tang Soo Do Alliance, and International Tang Soo Do Federation. He also holds ranks in several other styles in his search to be a well-rounded fighter. Ron has been married to Gaming Trend Editor, Laura Burke, for 21 years. They have three dogs - Pazuzu (Irish Terrier), Atë, and Calliope (both Australian Kelpie/Pit Bull mixes).
Related Articles: Super Stardust Ultra VR
Share
Tweet
Share
Submit