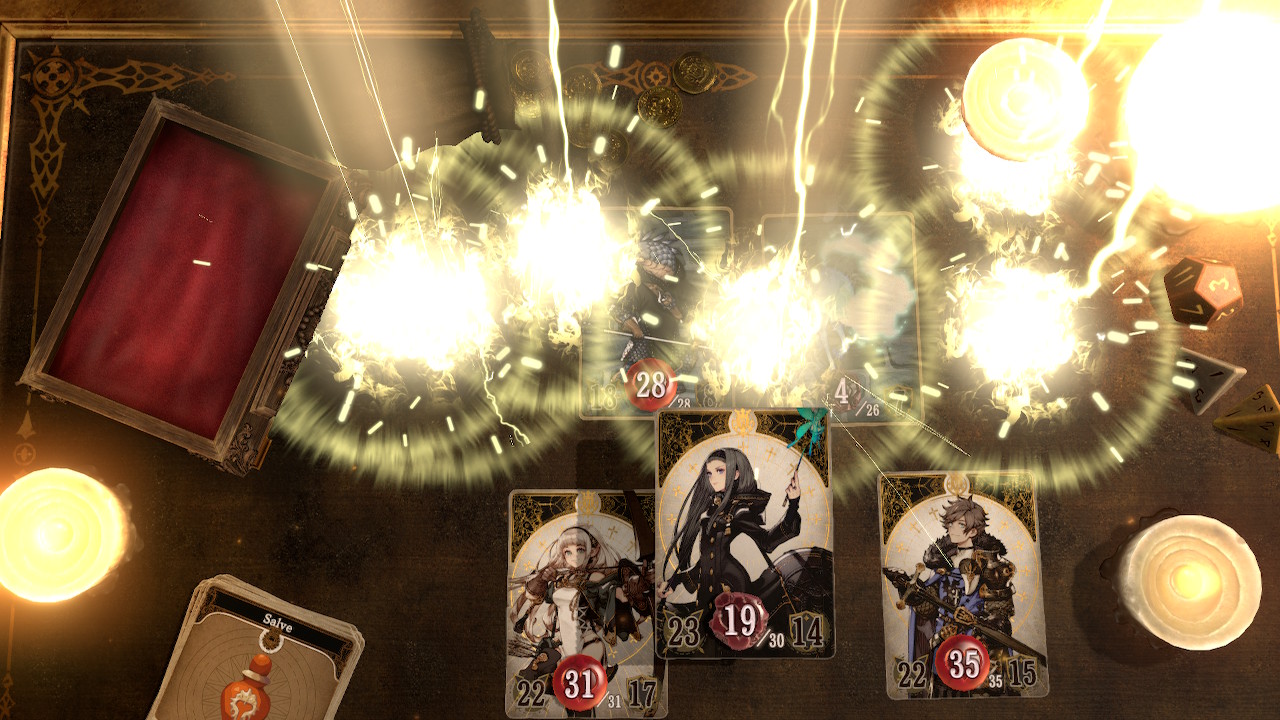 Queen Nilla of the Isle of Bliss issues a bounty for the dragon terrorizing the land. Three noble souls of the Ivory Order take up the task for the good of the realm: a healer, a mage, and a warrior. One would think this fellowship the heroes of our tale, but our story instead follows a greedy mercenary, his pet monster, and a witch dressed in black.

Voice of Cards: The Isle Dragon Roars is a very odd title. It’s stylings emulate tabletop games, complete with a Game Master, while the mechanics and gameplay hearken back to old JRPGs like Dragon Quest. Almost everything is made of cards: the characters, the world, items, save for the table and board. This is basically a board game, though with some unique features like the GM voiced by the lovely Todd Haberkorn who is, in fact, the only voice you’ll hear throughout this 10 or so hour adventure.

On the overworld, you control a small, chess-like piece and move it around to various cards that represent locations, characters, or terrain types. For example, in a town if you want to talk to someone or visit a shop you can simply place the piece on that card by selecting it with the right stick or moving tile to tile with the left stick or D-Pad. As you explore, adjacent cards will be flipped over much like revealing a fog of war. As mentioned before, you can conveniently jump to any revealed card with the right stick, so unless you’re exploring a new area or grinding these random encounters are a non-issue.

When combat starts, the GM will place a special board on the table, in which you’ll see your party of three, the enemy combatants, and a box which contains gems. Similar to Pokemon, each character in your party can only bring four moves with them into battle, including their basic attack. Let’s use Melanie, the mage of the party, as an example of how battle works. On its face, each card has Attack, Defense, and Heath stats. While it’s not exact, if Melanie has 10 attack and 5 defense, you can pit those numbers against an enemy’s attack or defense to get a rough idea of how much damage she’ll deal or take. At the start of a turn, you generate one gem. While each character’s basic attack doesn’t use any resources, more powerful moves will consume one or more of these gems. Melanie’s fire spell hits a single target for her attack stat plus 3 and uses up one gem, simple enough. Her wind spell, however, might still consume one gem but deal her attack plus the roll of a d6 to one target. Certain moves are better for certain situations, like factoring in elemental weaknesses, or you may get a better result from the roll of the dice. It’s a very fun and interesting take on turn-based battles that constantly evolves as you level up and get more party members, while not overstaying its welcome or getting too complex. 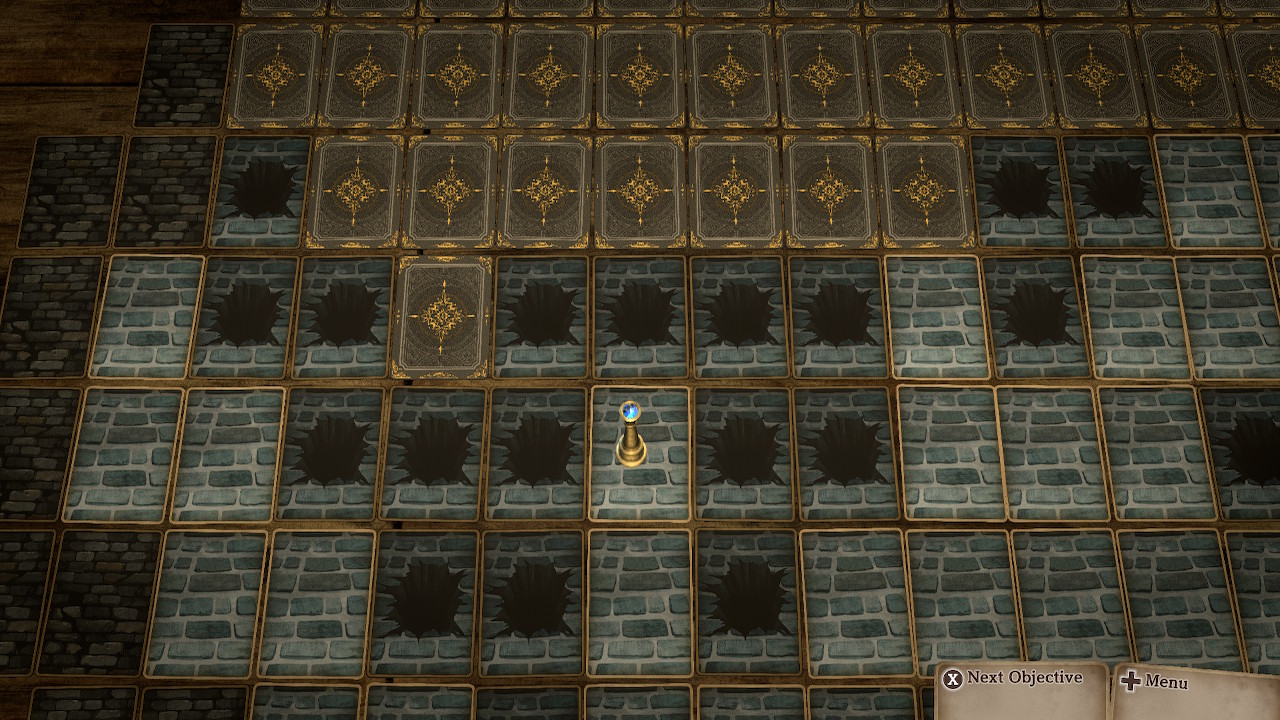 While there’s not much off of the critical path in Voice of Cards, there are a few side quests and alternate choices you can make in cutscenes to spice things up. In some important choices, you can even “cheat” a little by taking a peak at the outcome by holding A on the card of your choice – a very cute detail. Side quests, however, will usually reward you one of the ten Mysterious Cards which will unlock a new ending. There’s also random events that can occur on the overworld, like overhearing where some treasure is buried or avoiding a tornado by the roll of the dice.

Voice of Cards has a very tactile visual style. While the art on the cards is a bit anime in style, the cards the art is printed on as well as the table and dice look much more realistic. I was actually surprised to see that the Switch and PS4 versions of the game are fairly comparable – with the only advantage of a base PS4 being a slightly shorter initial load and less stuttering on the transition into and out of battles. Unless you really need that higher resolution, I would highly recommend playing on Switch with touch controls to add to that cozy, board game feeling the visuals are going for. Needless to say, you’ll also want a pair of headphones to soak in all the detail of the sound effects, the GM’s charming performance, and the absolutely gorgeous soundtrack.

Voice of Cards: The Isle Dragon Roars is a strange mix of table top and video games that manages to add something new to the very traditional JRPG genre. It’s a short, cozy experience that doesn’t overstay its welcome while also feeling fully fleshed out.

David is the kind of person to wear his heart on his sleeve. He can find positives in anything, like this is a person who loved Star Fox Zero to death. You’ll see him playing all kinds of games: AAAs, Indies, game jam games, games of all genres, and writing about them! Here. On this website. When not writing or playing games, you can find David making music, games, or enjoying a good book. David’s favorite games include NieR: Automata, Mother 3, and Gravity Rush.
Related Articles: Voice of Cards: The Isle Dragon Roars
Share
Tweet
Share
Submit