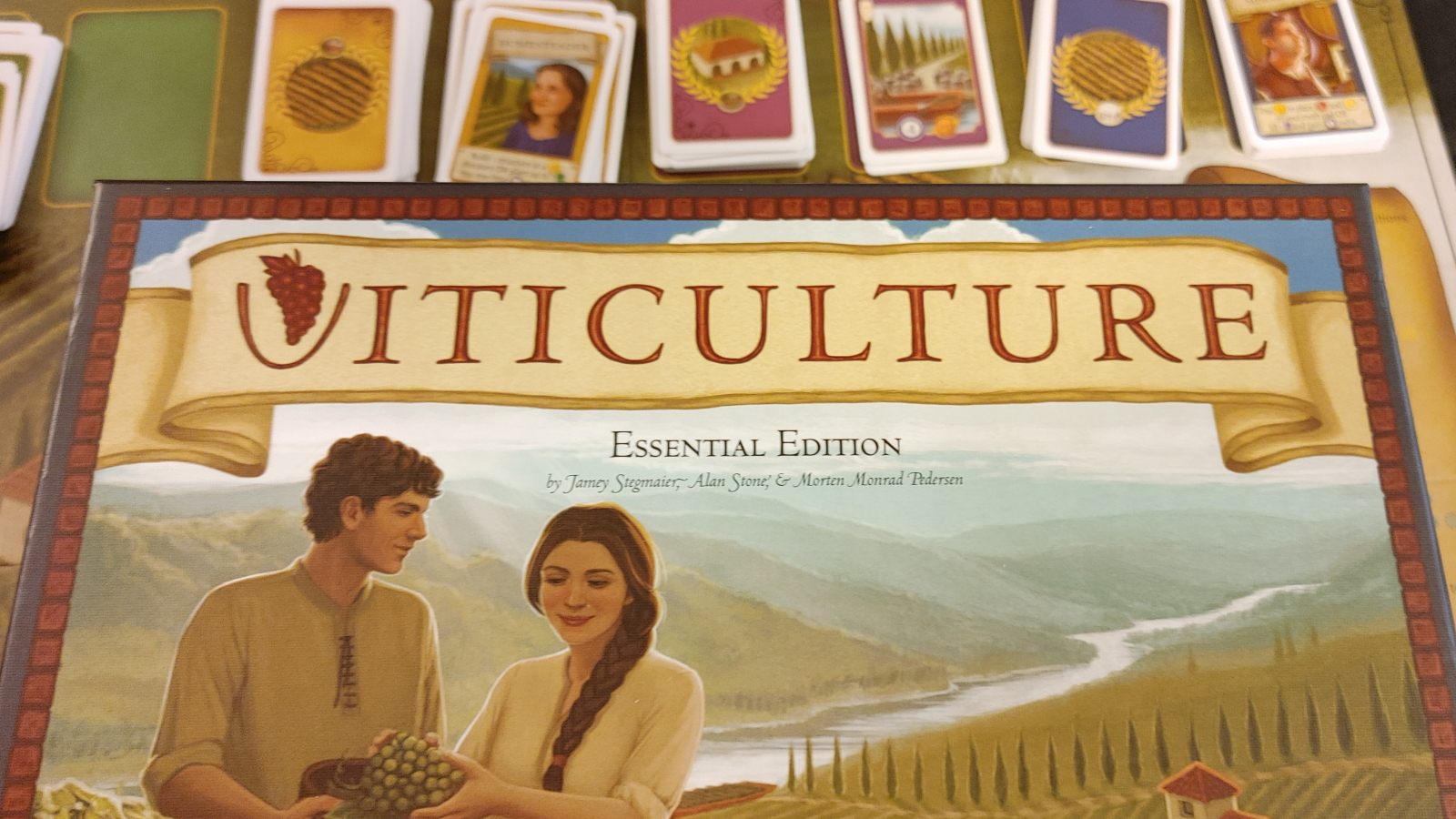 Italy is world famous for its pasta, its idyllic plains, and of course, wine. In Viticulture, you are in charge of your own winery. Viticulture: Essential Edition is a re-release of the original Viticulture with some upgrades from the iconic Tuscany expansion. Specifically, it includes Mama’s and Papa’s, which is a variable start mechanic, changes to how fields work, a few additional visitor cards, and a solo variant (Automa).

Viticulture was one of the top games of 2013, but it’s one I never got to play. Because of this, I feel uniquely qualified to approach this 2022 re-release of Stonemaier Game’s classic winery game. And it’s good.

Since the last Viticulture review on this site was from 7 years ago (Link to https://gamingtrend.com/feature/reviews/day-wine-country-viticulture-review/), let’s talk about the game that the Essential Edition offers. 1-6 players, represented by a pair of wine making Mama and Papas, will get a small handful of resources, and are expected to turn that meager start into a bustling wine making industry. Each season has different actions. In Spring, players choose their action order for the rest of the year, with better rewards for those who go later in the action order. In Summer, each player uses their stock of workers to draw or plant grapes, sell grapes or fields, build buildings, utilize visitor cards, or give tours to get some extra money. In the fall, players draw new visitor cards, and in the winter, players harvest the grapes, make wine, draw or fill wine orders, or train new workers for the next year. The first player to 20 points wins, and points are primarily received by wine orders. 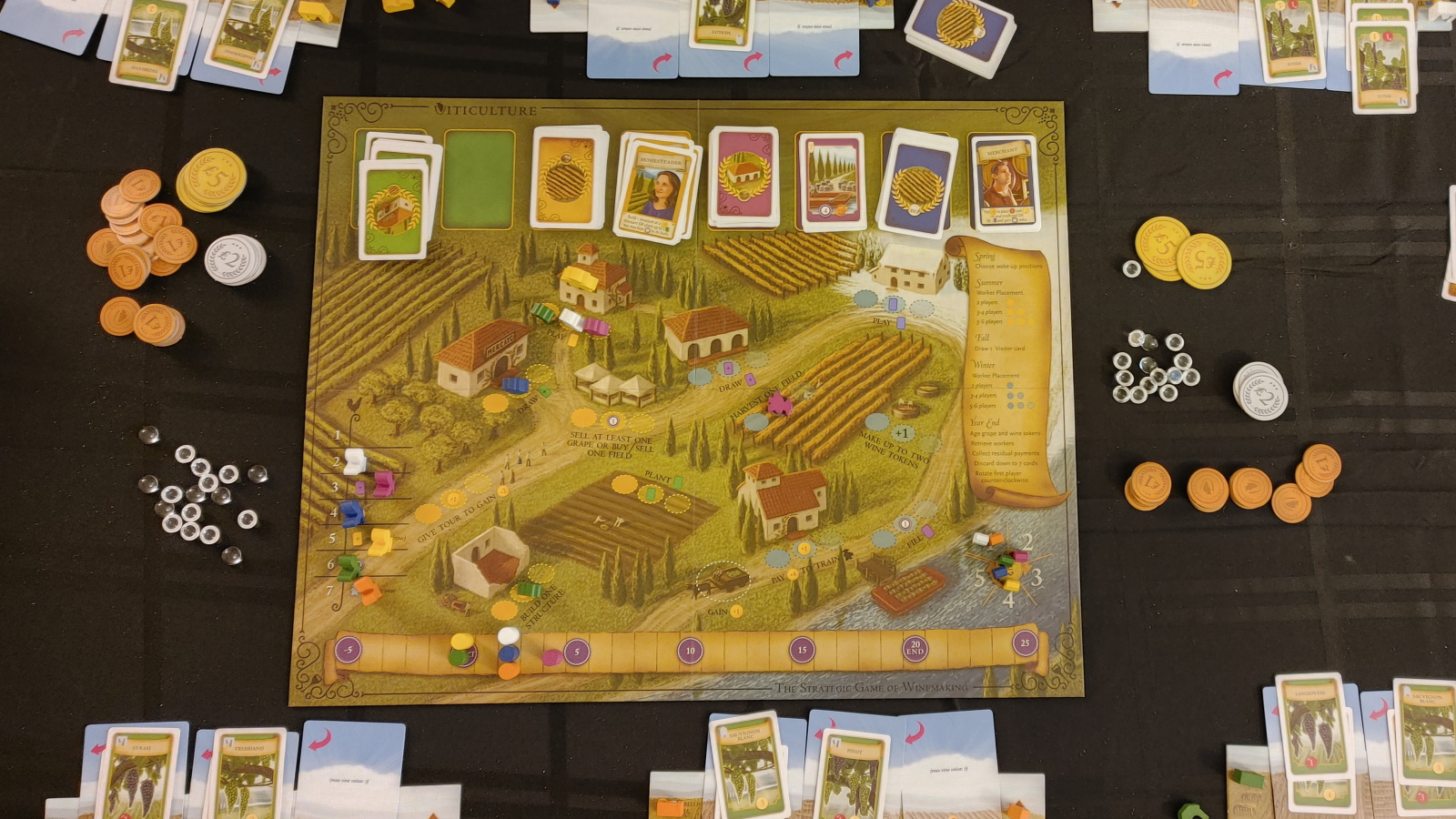 Starting on my Viticulture journey, I was immediately enthralled by the beautiful pastoral scenes, and the lovely village board that players place their workers on. Once I got into the game, I recognized pretty quickly that, like with most worker placement games, there isn’t enough time to do everything you want to do, and certainly not enough spots for each player to do what they want. This tension is mitigated by the Grande worker mechanic, where each player gets a big boy worker that can ignore the limited spacing rules. However, each player only gets one of these, so players have to pick their battles.

The visitor cards are also an interesting wrinkle. These cards are powerful, capable of performing multiple actions in a single card play, or offering extra rewards or point making opportunities. However, they also take an action space in the limited action economy, and there are only a few ways to get visitors in the first place.

Wine making is also an interesting process, which is good. It’s the name of the game, after all. First, players need grapes, which can be sold for money, or turned into wine. When making wine, players can make one of 4 types of vintages, depending on whether you have the requisite cellar to store them. White and red wines are easy to make, while blush wines and sparkling wines require more and better grapes. Once you have them, grapes and wine all age at the end of the year, so you get this kind of clockwork feel to your wine making. Of course, the main reason you make wine is to fill wine orders, which will provide the lion’s share of your points, and will give you extra cash every year. 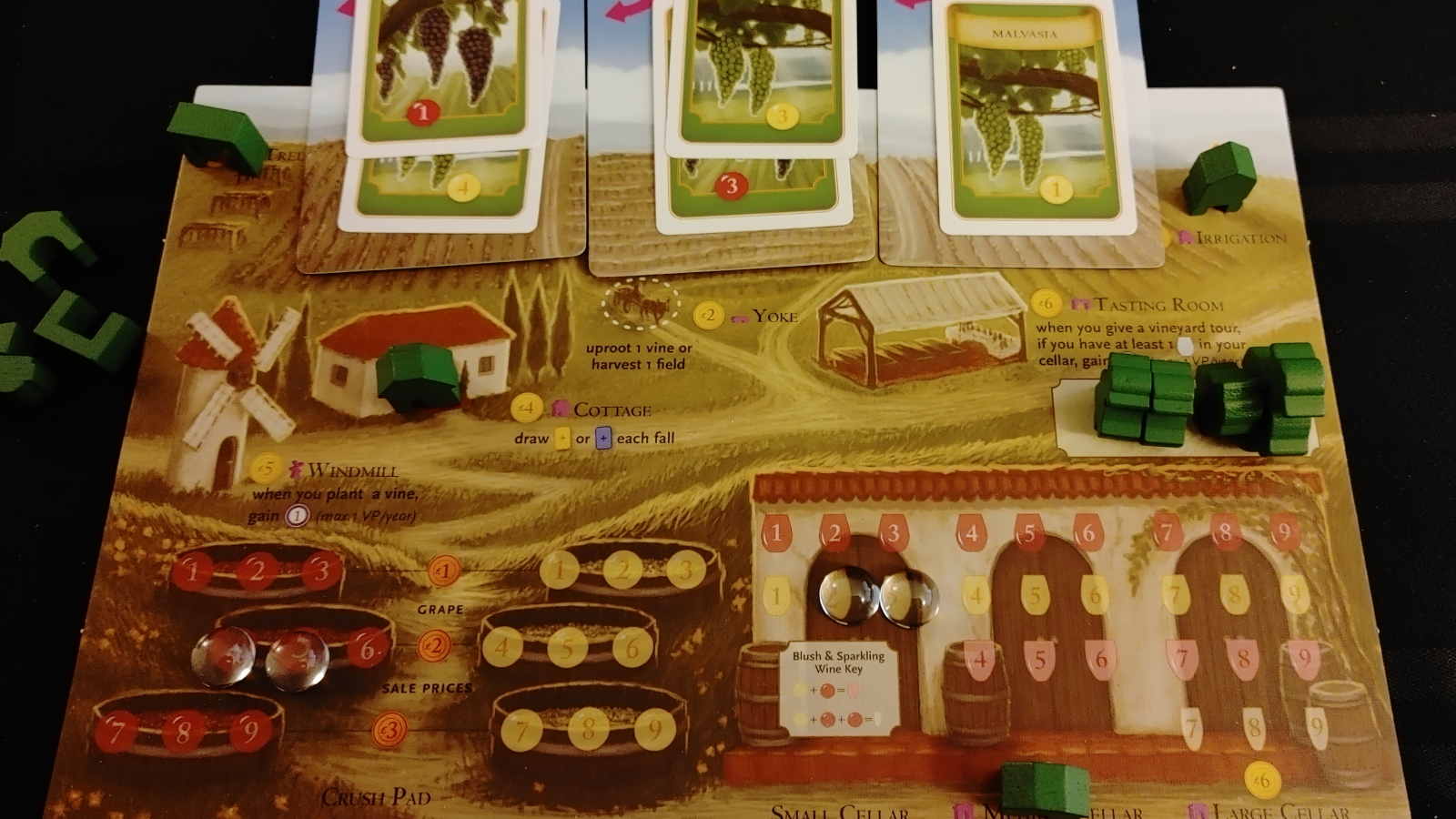 Because players start with almost nothing, the game has an interesting flow to it. At the start, the summer is the most important, with players spending almost all of their workers to build their infrastructure, plant their grapes, and make the money to do those things. However, once that work is done, players can almost skip summer entirely, as the harvest and wine-making becomes the most important part. This shift happens in the economy as well, as cash becomes almost pointless by the end of the game, with grapes, wine, and victory points becoming the currencies of choice.

I feel like the start of the game runs just a tad too slow, as players start with almost nothing. Often, the first year is just getting things ready for the game to begin, players grabbing required buildings to plant, the cellars to make wine, and the plants to actually plant in their fields. Basically, the interesting parts of the game, harvesting grapes, making wine, and aging that wine, doesn’t start until year 2 or 3 of the game. This isn’t necessarily a bad thing, but it does mean that players that get a good visitor early can take that advantage all the way to the end of the game, or another player might lose out because of their placement in the first spring. On the one hand, this means that every choice matters, even early on. On the other hand, I felt like that first year just needed to get over with so I can start the actual work of making the wine. 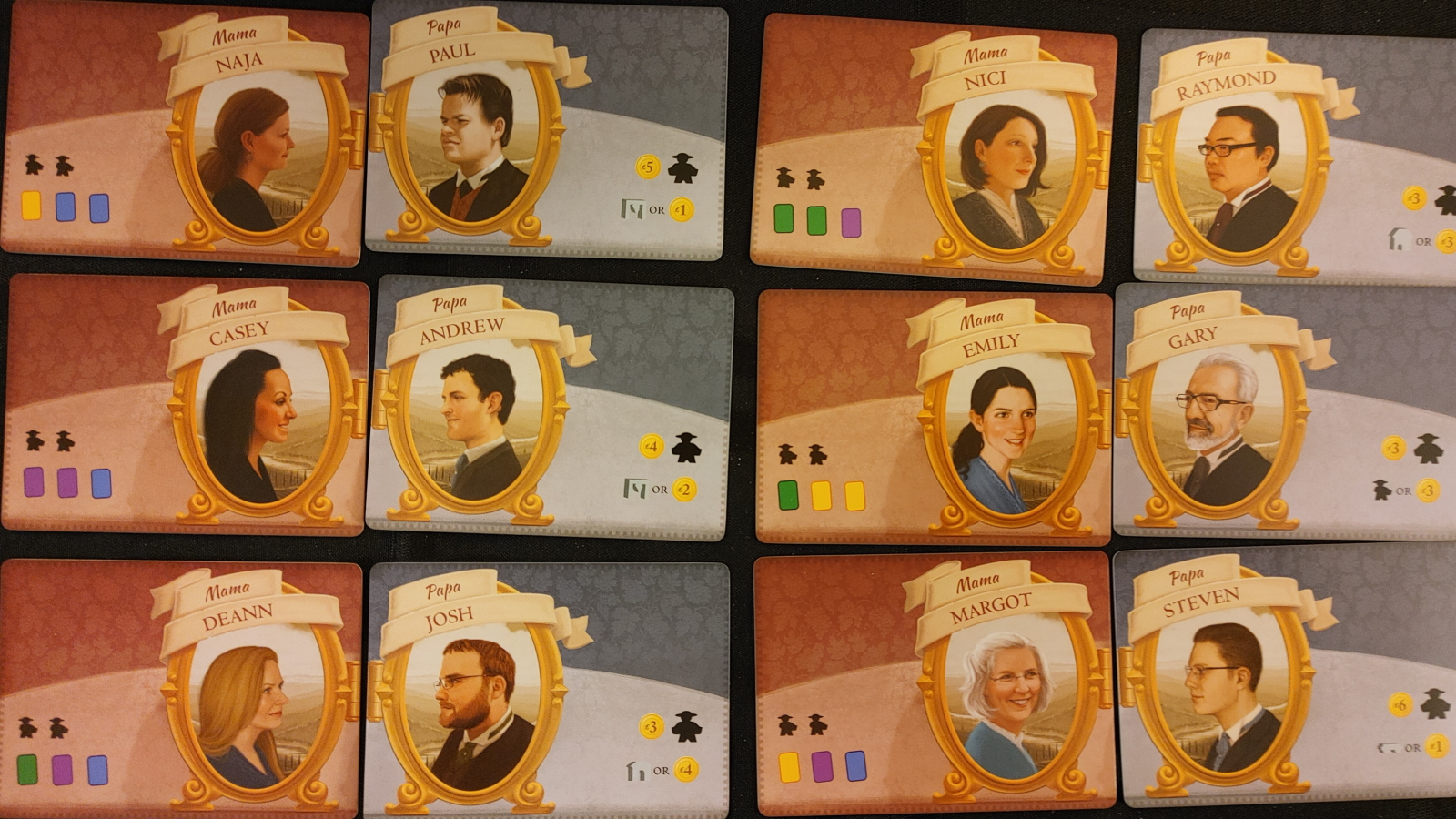 Viticulture, as mentioned before, is a beautiful game, but it does have some rough edges. The game has several typos littering the rulebook. This surprised me, as you would not expect a game re-release to have any such things. There are also descriptions of some of the visitor cards, but the rules don’t explain some key aspects of them either. The mama’s and papa’s are also somewhat disconcerting at times. The randomized starting resources do not appear balanced, with some starts being straight up better than others, and there are the occasional disconcerting and sometimes hilarious matchups that can happen. An example being an elderly looking papa is matched with a very young looking mama. Maybe it’s a father-daughter relationship, and I am almost certainly looking at these small things way too closely.

I also am a bit mystified by the legacy that Viticulture has wrought. When trying to play this game with veterans of the game, they all said similar things. Things like “If you’re not playing the Tuscany Expansion, then I don’t want to play”, or “It’s a good game, but I’ve got all the expansions, and it’s just so hard to go back”. The Essential Edition is a fine starting point, but I can’t help but feel like I’ve missed out on a cultural phenomenon for the last 9 years. At $45, the essential edition is a bit cheaper and more complete than the version released 9 years ago, but I feel the desire to expand. Maybe I, like the wine makers in Viticulture, am just starting out, with nothing but a barren field that is full of potential. So keep an eye here, because there’s an awful lot of Viticulture out there. Maybe I’ll do some cultivating of my own.

Viticulture Essential Edition is a modern re-release of 2013's masterpiece, Viticulture. It's still quite good, and the small additions sand off the rougher aspects of that gem.