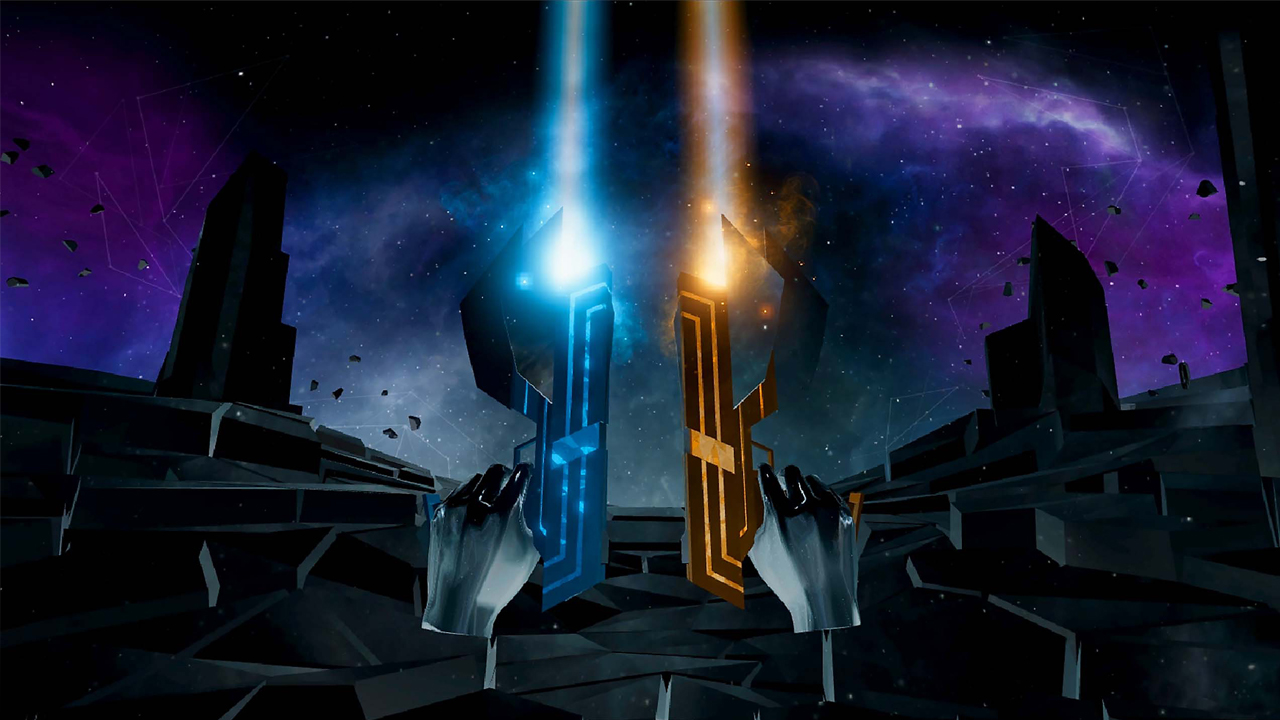 Guitar Hero, Dance Central, every iteration of Rock Band, Fantasia: Music Evolved, DropMix, Frequency, Phase, and Amplitude (both the 2003 and 2016 version) — my love for Harmonix runs deep. No company loves music games as much as they do, and once again they are taking their show into the virtual reality space with their newest rhythm game, Audica. Could Audica be the answer to games like Synth Rider and Beat Saber? Time to strap on the headset and fire up the speakers.

Not unlike many of their other games, Audica sends nodes towards you, and it’s your job to address them. Here, you’ll use a gun in each hand to shoot red or blue colored targets. Normal targets can be shot in any way, but there are also targets with a direction indicated. For these ones you’ll need to hold the gun vertically or horizontally to nail them. There are also sustains that you fire and hold the trigger, as well as a streak type that has you fire and hold, then “draw” the arc. Occasionally Audica will also throw blocks at you to strike for additional points. This is one of those moments where it’s better to see than describe, so let’s do exactly that.

As you can see, this game is a score chaser’s dream. Leaderboards in VR games isn’t a new thing, but hitting combination chains is satisfying in Audica. Not unlike Pistol Whip, once you get the hang of the rhythm, Audica begins to feel almost like a dance game instead of just a shooter. Swinging through the sustains immediately reminded me of Elite Beat Agents. Smacking down the melee blocks evokes Beat Saber. All that said, while Audica may borrow gameplay elements from its contemporaries, the shooting aspects and the layer of high-gloss polish that Harmonix has laid on this game makes it different enough to feel unique, engaging, and complex enough to keep me coming back.

Unlike its contemporaries, Audica ships with a campaign mode. Taking place across four tiers, the game pushes you to try the game in different ways, offering up challenges like reducing the aim assist, speeding things up to 120%, or making your guns invisible, just to name a few. The tiers are locked until you complete a certain amount of the songs, but completing them on Beginner lets you access the Moderate and Advanced tier as well. The Expert difficulty level remains locked until you finish up those songs on the Advanced tier.

I’m happy to say that Audica has a very polished learning curve. Beginner eases you in with a lot of aim adjust and very forgiving timing. Bumping up a level reduces the aim adjust and timing a bit, adding in sustains. Moving to the next level adds speed, directionality, and the occasional orbs to strike with the butt of your guns. While Expert doesn’t introduce any new mechanics, it amps it all to 11. At the top tiers, it even asks you to nail shots outside of your peripheral vision — good luck! Giving Audica to VR veterans or rookies alike, they all felt like the game had great difficulty progression. This will be a hit at our upcoming holiday party, for sure. Here’s some gameplay on Advanced.

The strength of any music game lies in the soundtrack. There are a ton of names you’ll know, and plenty that you won’t. David Guetta, Sia, Deadmau5, Zedd, Dragonforce, Knife Party, Noisia, and Iggy Azalea are joined by people like Jeff Allen, Logic, Marshmello, M-Cue, Bahari, and Wolfgang Gartner. Heavier on electronica and dance, there’s still a few old school throwbacks, and some utterly forgettable rap songs — I’m looking at you “I work hard everyday”. Thankfully, the vast majority of the songs are a hit.

Unofficially, there are over 100 tracks you can mod into Audica. Like other VR music titles, dropping in tracks expands the game exponentially. Also like other VR music titles, these non-curated tracks are often unbalanced and overly difficult, so tread lightly. Still, they are easier than any other game to drop in, so that’s a win. Naturally, there won’t be official support as that’d be an unacceptable risk for Harmonix and their tight licensing relationship with the music industry, but they have included a full mod engine to create your own mappings if you are so inclined.

Beyond the unofficial stuff, there is a season pass (or you can buy the tracks as a pack or one at a time, not unlike Rock Band) that adds additional tracks. “5 Seconds of Summer” from Youngblood, “Into You” from Ariana Grande, “bad guy” from Billie Ellish, “Believer” from Imagine Dragons, and “Better now” from Post Malone rounds out the first salvo, with the addon track list getting a full 15 new songs by December. Harmonix has done a great job with supporting their music games in the past (Rock Band 4 has thousands upon thousands of songs across every genre under the sun), but right out of the gate you’ll have 33 songs to play. Given the progression from Early Access to final release, it’d be very easy for the team to add new blasters and environments to keep things fresh, but time will tell.

There is a delicious icing on this cake that I’d be remiss if I didn’t mention. The team has been more engaged than I’ve ever seen, routinely talking with fans on the official Harmonix Discord server, helping score chasers with their techniques, talking about ways the team can enhance the game, and generally just hanging out. It’s great to see.

There really is only one hitch I could find with Audica. The game is stationary, and the backgrounds don’t move much, so it’s thankfully nausea free experience, but there is a slight hitch before and after songs. It’s not a lurch, thankfully, but a slight halt. This may or may not affect you, but I’m seeing it on a bleeding edge PC, so it has to be an engine issue. It’s a minor nit amidst a whole lot of awesome.

Audica morphs elements from several music genre bests, but putting a Harmonix spin on it. With a smooth pickup and play difficulty curve paired with a solid and ever-expanding soundtrack, Audica is another fantastic beat buster from Harmonix!

Ron Burke is the Editor in Chief for Gaming Trend. Currently living in Fort Worth, Texas, Ron is an old-school gamer who enjoys CRPGs, action/adventure, platformers, music games, and has recently gotten into tabletop gaming. Ron is also a fourth degree black belt, with a Master's rank in Matsumura Seito Shōrin-ryū, Moo Duk Kwan Tang Soo Do, Universal Tang Soo Do Alliance, and International Tang Soo Do Federation. He also holds ranks in several other styles in his search to be a well-rounded fighter. Ron has been married to Gaming Trend Editor, Laura Burke, for 21 years. They have three dogs - Pazuzu (Irish Terrier), Atë, and Calliope (both Australian Kelpie/Pit Bull mixes).
Related Articles: Audica, VR
Share
Tweet
Share
Submit