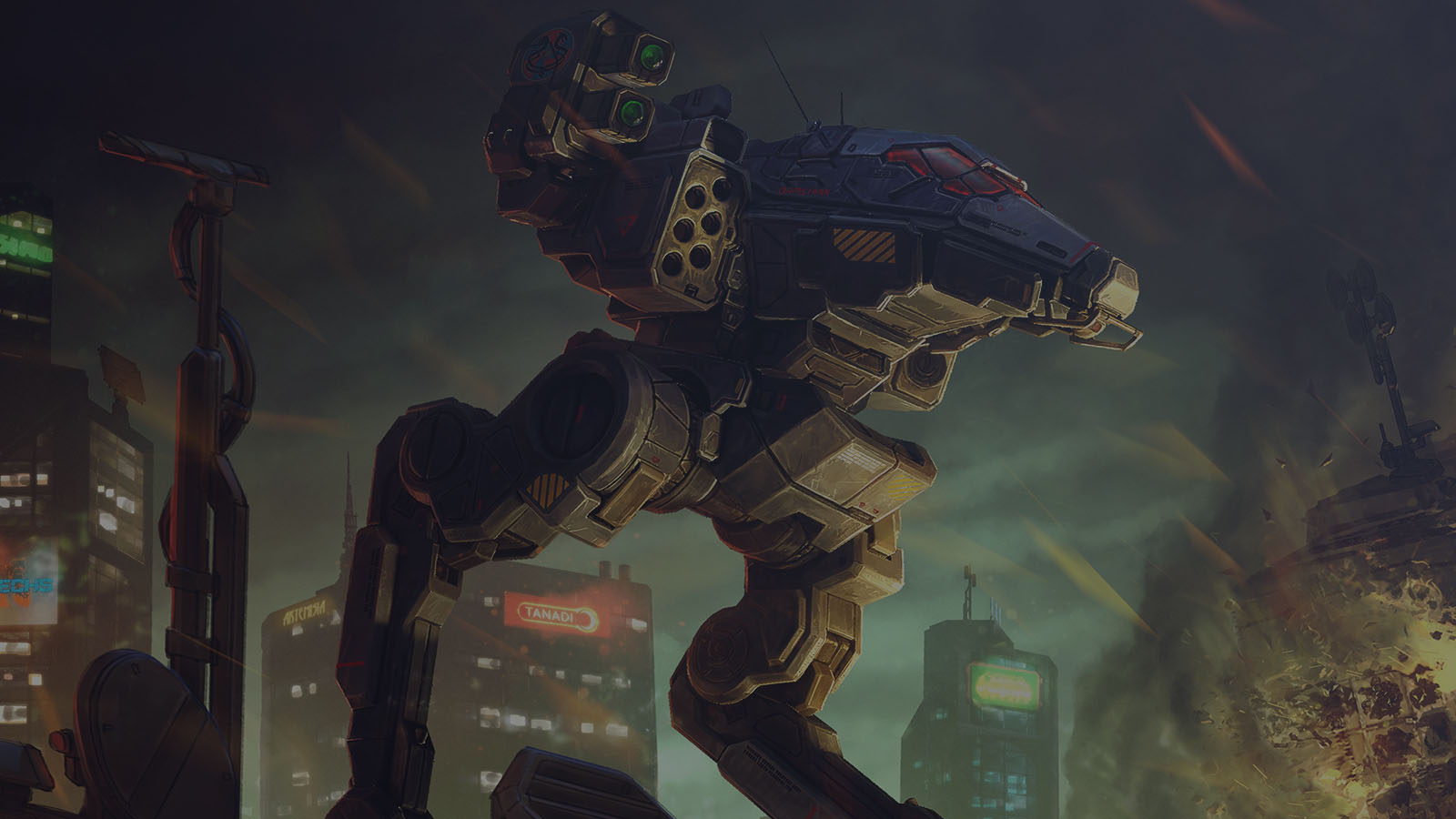 If you’ve been playing BattleTech as long as I have then you probably remember the grainy but amazing intro videos for the MechWarrior and MechCommander series. Several of those videos featured mechs in combat in wide open spaces, but it’s the tight corridors of the city landscape that makes for claustrophobic and dangerous battle. It was easily the most exciting part of earlier mech battle games, and an aspect I desperately was hoping to see integrated into Harebrained’s BattleTech. I’m very glad to get to power up my mechs once again and check out the Urban Warfare expansion.

The first thing to know is that the Urban Warfare expansion folds in to the game at any point. You don’t have to restart the campaign to experience the new biome — it occurs naturally as you tackle encounters on urban planets (as the name might suggest). Rather than relying on simple height differences in open space for advantage as we have up to this point, now your squad will have to contend with skyscrapers and chokepoints.

Buildings create an awesome new landscape for chaos and destruction, but let me assure you that they are more hazardous to your health than you might think. As you will see in the video below, the enemy thought it might be a good idea to use their jump jets to perch up on top of a shorter building. This proved to be a fatal mistake when his perch exploded into a fireball under its feet thanks to stray, indirect fire from his compatriot’s missiles. The streets have bridges, short buildings, and skyscrapers creating a very dense criss-cross of chokepoints and ambush opportunities. Watch as a shot intended for an enemy mech ended up lighting him up as the coolant tank nearby exploded:

As you can see,creating line of sight for ballistic and laser weapons becomes problematic when facing narrow corridors, and those same sight lines are quickly lost with very little movement. This makes missile lock that much more important, but that’s not the only game in town. My first few missions I spent time ducking in and out of alleyways with my Steiner Scout Lance and a side of King Crab, but soon I figured out that “through” is just as viable as “around”. Targeting buildings and clearing the field may use a bit of ammunition, but clearing cover forces the enemy to displace, leaving them open to crossfire. Most importantly, it makes jump jets useful again — something the game desperately needed. It also makes the Highlander more useful, and this helped me break the lock of constantly fielding nothing but the heaviest bits of steel I could pack on my dropship.

Beyond the tactical bits, you have to admit that the cities are dense. After a quick laugh at Bluth Corporation (somebody is a fan of Arrested Development) buildings, I couldn’t help but notice the detail: the cars littering the streets, the lights, and the future-perfect glow of soft neon everywhere. Every little building seems to be swollen with little bits and baubles, all of which crash into a heap when the collateral damage begins. It does cause a few more hitches as the dense landscape pushes the Unity engine hard, but it’s completely worth it.

Speaking of collateral damage, BattleTech gets a lot harder when the missiles and lasers don’t just evaporate when they miss their intended target. It’s very easy to get into a ‘turtling’ mentality, keeping your lance grouped tightly as you inch your way towards enemy positions. Stray shots, that laser that went wide, or the half a dozen missiles that missed their mark can now end up deep in the chest of the mech standing next to you. This has implications on armor to be sure, but you can bet it can be a problem for stability. There is now a reason to spread out a bit.

To help with creating and maintaining (or obfuscating) sight lines, Urban Warfare also brings one of the most requested additions since the base game launch — ECM and Active Probe. ECM, or Electronic Countermeasures, change the battleground dramatically by hiding your lance from enemy sensors. Since the foes you face tend to love launching missiles at your legs, your ECM can make the difference between being constantly peppered with indirect missile fire and a frustrated foe. Naturally, the ECM has its own countermeasure in the form of the Active Probe. Active Probe allows you (or your enemies) to cut through the ECM blanket and still drop ballistics on your position.

If you are a long-standing pen and paper mech jockey you’ll probably remember that the ECM and Active Probe were both introduced after the Succession Wars (around 2597), and you may more fondly recall them as Guardian ECM and Beagle Active Probe, or BAP. You may also recall that they were mounted on two particular mechs most commonly — the 35 ton Raven 1X and the 30 ton Javelin 10F and 10N variety (the F is the Fire Javelin designation equipping four medium lasers versus the N variant which sports a pair of SRM6 launchers). In this expansion, it means you will be forced to choose between that 100 ton weapon-laden behemoth and having better intel encased in a high speed/low armor fragile light mech. If you want to chase down that Raven 1X, you should keep an eye out for the “Prototype” Flashpoint and run it to its conclusion. Just be mindful that the enemy might just roll out some of the new vehicles equipped with a BAP or ECM to harass you until you do.

In practice, the Raven and Javelin come in most handy in the urban conflicts where enemies can sneak up on your King Crab, blast it in the back, knock it on its ass, and kill one of your most beloved pilots. Sigh…watch me get caught in the crossfire in the worst way below:

Beyond the new biome (with a fresh and desperately needed sorting filter to make the new Urban Warfare biomes easy to find), there are 50 new planets, plenty of new choice moments with your crew, Lostech, as well as a few linked story missions. If you’ve picked up the Flashpoint expansion, there’s even a few of these to tackle. Last but certainly not least, there’s a new encounter type called “Attack and Defend” that is exactly what you might imagine it to be. You are contracted to defend your employer’s base as a veritable parade of enemies stomp towards it. Your job is to not only beat them back (those missile counts are starting to matter a bit!), but also to push your own lance forward until you can ultimately put a stop to the onslaught by mopping up the source at their base. It’s challenging, especially if you lose a mech or find yourself low on ballistic ammunition.

If I had one complaint with Urban Warfare it’s that it focuses entirely on the core gameplay loop to the exclusion of all else. There is no suddenly-uncovered wing of the Argo to improve, there are no new buttons to press on the command deck, and there is nothing going on but the clang of wrenches in your mechbay. It’d be nice to see something new here, but in the face of all the improvements elsewhere, it’s understandable.

Tremendous improvements to the core gameplay loop provide new reasons to use light mechs and jump jets. The new biome creates new fighting corridors and new mechs create a way to make those hallways dangerous. While it doesn’t bring much new outside of combat, this is a must-have and a reason to revisit the BattleTech universe.

Ron Burke is the Editor in Chief for Gaming Trend. Currently living in Fort Worth, Texas, Ron is an old-school gamer who enjoys CRPGs, action/adventure, platformers, music games, and has recently gotten into tabletop gaming. Ron is also a fourth degree black belt, with a Master's rank in Matsumura Seito Shōrin-ryū, Moo Duk Kwan Tang Soo Do, Universal Tang Soo Do Alliance, and International Tang Soo Do Federation. He also holds ranks in several other styles in his search to be a well-rounded fighter. Ron has been married to Gaming Trend Editor, Laura Burke, for 21 years. They have three dogs - Pazuzu (Irish Terrier), Atë, and Calliope (both Australian Kelpie/Pit Bull mixes).
Related Articles: BattleTech Urban Warfare, Let's Play
Share
Tweet
Share
Submit