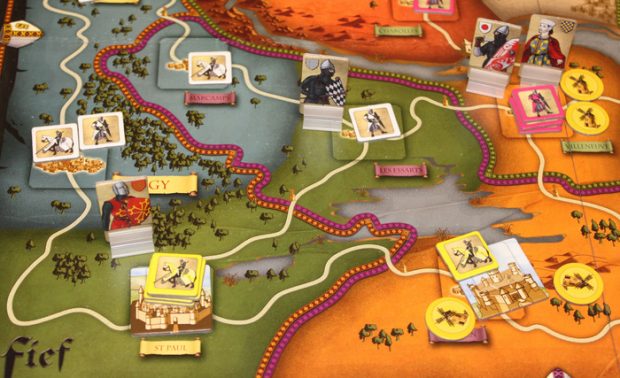 Medieval times were hardly for the faint of heart. Treachery, wars, plagues, and famine were all too commonplace. Lords of the period were in a constant battle for power and prestige with only the savviest, and perhaps most brutal, rising highest among the ranks of nobility. Despite the horrific backdrop, there’s an alluring sense of intrigue around the politics and power struggles of the age. Fief France 1429 allows you to test your cunning in medieval politics, warfare, and piety without the fear of catching the bubonic plague.

Taking on the role of a noble family, your goal is to earn victory points by claiming titles. Your family may become a baron, count, duke, king or even the Pope. Each of these titles your family possesses earns one victory point. Three victory points gives you a win. This may not sound like a lot, but the task is more arduous than you think.

You begin with control of a single village occupied by a lord and a modest army, all within a stronghold keep. Normally, your turn would begin with the election of particular titles, but titles aren’t available to you at first. Instead, you need to expand your meager holdings to earn those coveted claims.

Establishing a foothold is important as it won’t be long before you have unwanted neighbors.

Your ambitions require coin, and you can increase the wealth of your fledgling realm by using your lord to move armies to bring more villages into the fold. Every village generates a coin, so early expansion is vital. You can strengthen your income by building mills within the villages, each of which adds another two coins to the coffers.

Fief includes two decks that you may pull from each turn that will aide your expansion efforts. You may draw one card from the lord deck that typically adds both male and female members to your noble family which allows you to move more armies about the map, though other characters can be drawn that come into play later in the game. The only thing unique about each lord is their name and portrait, though male lords have some privileges in the game than their female counterparts. Feminism wasn’t popular in the fifteenth century.

The other deck is a combination fortune and disaster cards, which represent both good and bad events. The good events can drastically increase your income by increasing mill production or by levying taxes, though that may cause an uprising. You may also draw cards that allow you to trigger events like uprisings, capture another noble, or even assassinate one. You may draw up to two cards from the fortune and disaster deck, but they must be drawn in order. That means you may have to plow through the bad events to get to the good ones. The tradeoff is worth it considering the benefits, but you may set off a famine, heavy rain, or plague that could affect your holdings. You may save up to three cards to play later in the game.

The colorful board is divided into five bishoprics, geographical areas serviced by a local bishop. Within these bishoprics are fiefs, which are land holdings comprised of two to four villages. As you expand, you may end up controlling all the villages within a fief. This will be the first title you get access to in the game, that of a fief lord. Unlike other titles, fief lords can earn their position by simply buying the title once they meet the requirements and costs double the number of villages in a fief. It’s here you gain your first victory point. There’s no victory point difference between a two village barony and a four village duchy, but a duchy will grant you more income.

Some titles will grant you votes while others will earn you victory points. Both are keys to winning.

Eventually, the board will be teeming with armies from all houses. As bishoprics fill with armies, the position of bishop can be decided with a vote. Controlling villages within the bishoprics grant you votes, as does holding other ecclesiastical positions of cardinal and Pope. Being a bishop doesn’t grant you victory points, but it does allow you to vote for the king and Pope which do score points. Bishops can also tithe their bishoprics to gather taxes. From there, other titles start opening up fairly quickly. Cardinals can be bestowed once a cardinal card has been pulled from the lord deck. Popes and Kings can be elected once enough titles are in play.

Fief’s voting mechanism also shows off the skullduggery that may occur in the game. Each player has two voting tokens, one that will cast all the votes the player has to offer, with the other being a decoy that casts no votes at all. For example, say you are voting for the king. You possess three votes, so you can place the real token to a player and upon the reveal, all three votes could go to them. Conversely, you could give the player the decoy vote and feign your support.

A battle could last until one or both sides have been eliminated, but you have some options to stop a battle prior to its conclusion. You could surrender, which would wipe out your army and your lord would be captured, or you can suggest a truce which, if agreed upon, would stop the fighting and leave both armies staring each other down in the village. Captured lords can be ransomed and returned to their family, which may be the only reason you’d want to opt for a surrender. Lords can never be executed, only assassinated by a card play.

Fortune cards can allow you to capture opposing nobles, start uprisings, or bring justice to an assassin, but be aware that disaster cards may be drawn as well.

To protect yourself from your greedy neighbors, you can build strongholds to protect your lands. The purchase of a fied lord title also allows you to build a fortified city within your fief. Defending inside a keep or castle subtracts battle dice from your invader, though the secret passage card could allow them to sneak in! Otherwise, they will need to set up a siege and require them to spend another turn or two to gain their dice back.

This wouldn’t be a game on fifteenth century France without Joan of Arc. The D’Arc card can be pulled from the lord deck and be given to any unmarried female lord currently in the game. D’Arc serves as the game’s most powerful military leader by adding a battle die to each combat, and a D’Arc led army is the only one that can wield four battle dice.

As you approach the three victory point total, the nature of the game will make you an instant target. Luckily, you have the option to try to win the game solo or go for an alliance victory. You begin the game with a ring and some diplomacy tokens. You can marry one of male nobles off to a female lord, or female to male, to form an alliance with another player. Now you can win the game together by gathering up four victory points together. If one member of the alliance marries off the king, the other player’s female becomes the queen, whose grace instantly grants you an income bonus. Should your queen draw a male from the lord pile, that male comes the crown prince. Alliances can be very powerful in the game, but they can also be broken. The Pope could annul a marriage, and there is the ability to assassinate your spouse. Choose your allies wisely, as your ally could murder your king just to allow their crown prince to claim the throne.

Diplomacy is an important aspect of the game. Your three diplomacy markers are all you will receive, but they give you the option to exchange cards or money with other players to earn their favor. A marriage alone doesn’t require the use of a diplomacy marker unless you trade cards or coin as part of the deal. Alliances will sway as the power sways, and it adds strategy to the game.

As with all Academy Games, the components are of fine quality. Academy does offer building miniatures to replace the mill and stronghold tokens, but they aren’t really necessary. The counters are thick, and the wooden battle dice are excellent. You get a lot in the box so you certainly will feel you get your money’s worth.

It should be noted that while this review lays the game out the order you may accomplish things, the actual turn order isn’t quite as sequential. Voting for titles begins a round, but it’ll be a few turns before you can complete that stage. Fiefs can be expensive, but you’ll need time to build up your economy to do so. While there’s nothing particularly wrong with this, just realize it will take a few turns before the game really opens up all its possibilities.

What can be more frustrating is particular elements of the gameplay. Some rules are a bit ambiguous, something you may not notice until you get a few plays into it. Key elements of the game, such as claiming Joan d’Arc or gaining the ability to tax, come about completely by luck. A strong alliance can make the game a foregone conclusion. There are just little nuances throughout that can frustrate you. It’s an ambitious game, no doubt, but you may have to work through some frustrations to find the title you desire.

Fief can play with as few as three and as many as six players. The game is noticeably different with more players as villages become a premium. Also, you need at least four players to be able to trigger alliances, so three players really miss out on a layer of strategy.

Fief certainly has plenty for you to consider as you play, but the core concept of the game is fairly easy to pick up. The entire system of politics, plotting, and military intertwines very well. Of course, your mileage in the game will depend on the makeup of your gaming group. Those opposed to negotiations or sensitive to backstabbing will not enjoy it. However, if treachery and power interest you, and you can ignore some of its annoyances, then Fief may be a solid title for you.

Fief France 1429 is a deep game of political intrigue and warfare in the Middle Ages. Players expand their territory and claim titles for their lords while forging fragile alliances and surviving the odd plague or two. For anyone interested in the era or simply want to relationship of power and prestige, Fief is a fantastic game.