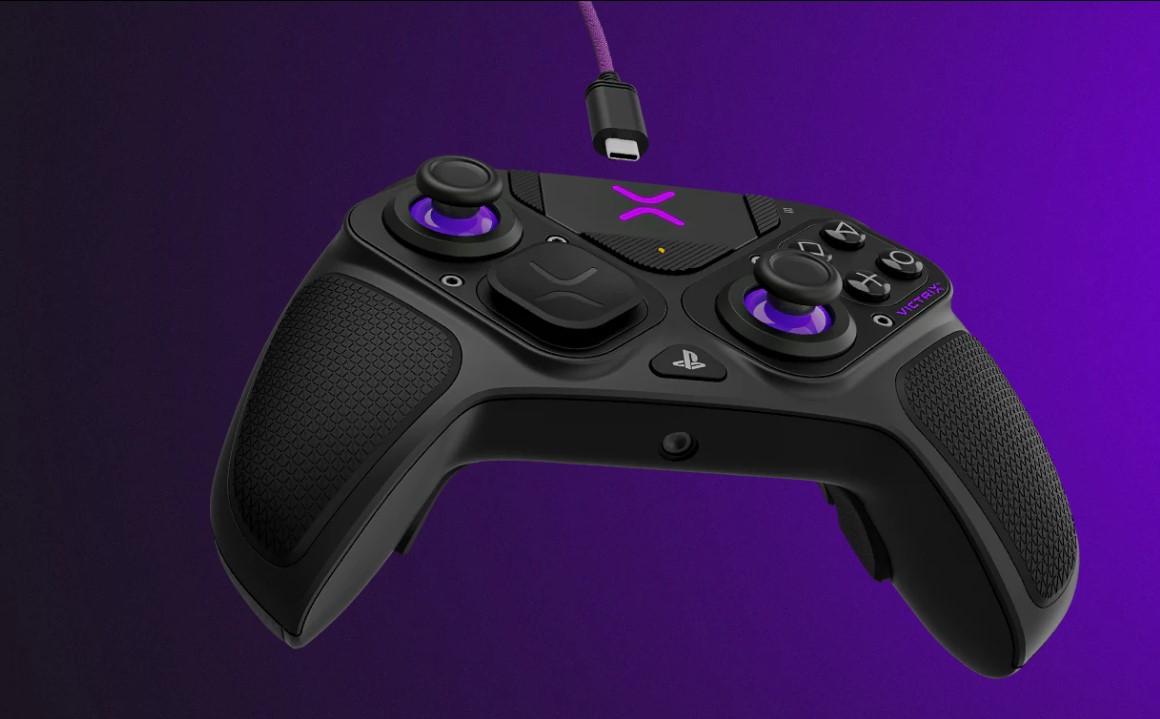 The best controllers are often what you make of them, but there are standouts in the space. For my money, the Xbox Elite Series 2 controller is the best one I’ve ever used, but if you play on PlayStation, you’re out of luck in using one. The closest I’ve ever gotten to it is the Astro C40, a fantastic alternative that unfortunately is only for the PlayStation 4. Besides that, it did have its caveats, like only two back buttons, and they wore out eventually. Can anything come close? Well, once you get your hands on a Victrix Pro BFG controller, absolutely.

We’ll have to do a summary of what’s in the box, because once you get into everything, there’s quite a bit here. In the “box” itself is the case in which everything lies, and a quick start guide that features a QR code in place of any actual instructions. While I have been able to largely figure everything out, said QR code takes you to the website for now, and as the Pro BFG is still pre-orderable I’d assume any instructions haven’t been uploaded. Inside the case is a lot of things, and here’s the list-

I don’t generally like to drop these from the website, but there is so much included with the Pro BFG, it’s hard to list it all as cleanly as what you see here. As you can tell, PDP sets you up to be able to handle a ton of different situations, and the range this controller has is incredible. What’s also pretty impressive is that everything fits in the case and fits well, which is outstanding. 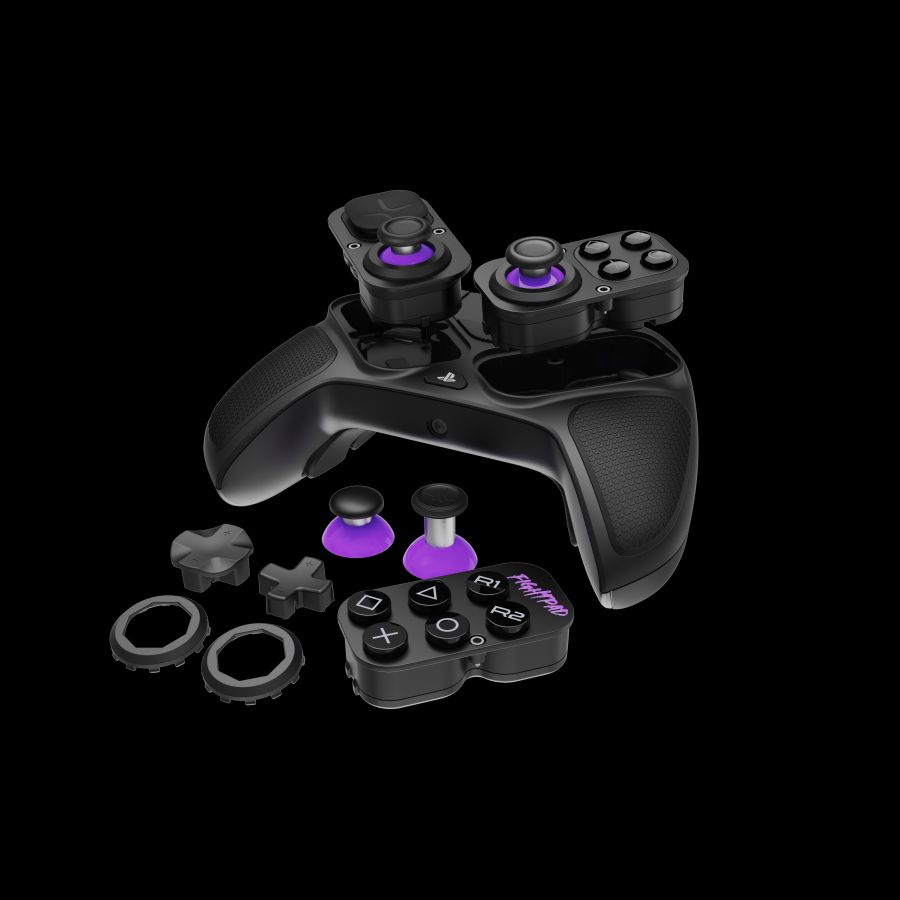 When you get the controller in your hands is where the magic happens. Something you notice right away is how light the Pro BFG feels. At first I thought it felt cheap, but upon further inspection it’s just that vibration modules aren’t present, which is something most pro players do without or turn off. The plastic is still nice and sturdy, so you won’t have to worry about any accidental breakage because of the design choice.

Another thing is how great the grip feels. While it is lacking some heft due to the missing vibration, it just feels nice to hold, with the rubber palm and finger grips on the handles being super comfortable. Similarly, the sticks have a nice feel to them. I was worried the choice of a smoother looking rubber grip could allow slippage, but I’ve not encountered that at all with the Pro BFG. The four back buttons are also perfectly placed, which is high praise from someone who has trouble with other paddle/button systems beyond the Elite paddles. Not to mention, the textured finish to the back buttons is a fantastic touch. The Pro BFG feels like an extension of me rather than a tool, and that’s exactly how the best do it. 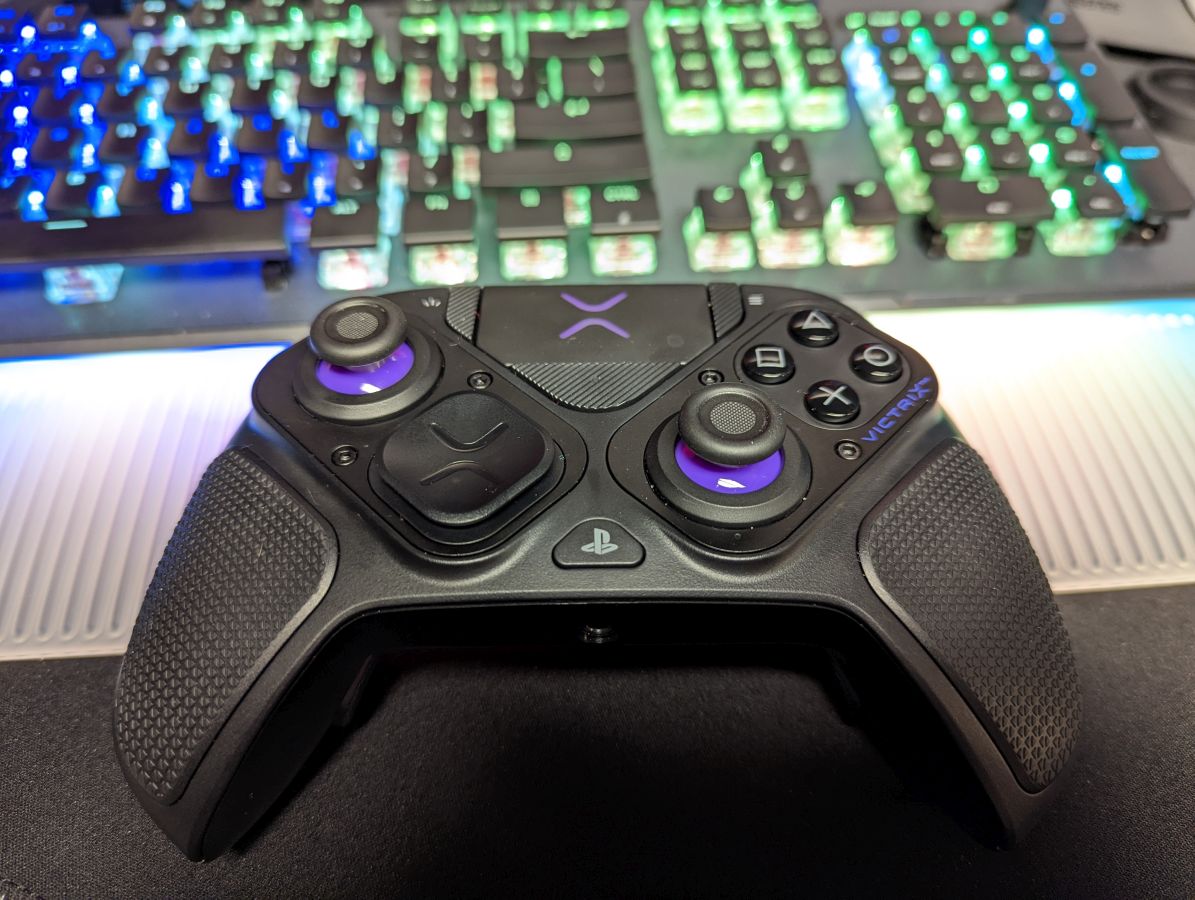 One thing that’s a bit off has been the triggers. They offer five different lock settings, and getting it right is a bit of a challenge. You slide the locking mechanism, push the trigger into where you want it, then release. While it’s easy enough to do, I’m not sure where all the different positions sit, leaving it a more complex operation. The triggers are also extremely sensitive, and I quite regularly fire off a couple of bullets accidentally because of how easy it is to “trigger” them. Figuring out your optimal trigger lock setting is imperative to staying silent on the battlefield it seems.

The versatility of course is why many will gravitate to the Pro BFG. It’s not just useful for multiple platforms (PC, PS4, and PS5); it’s extremely customizable to what you play. Modifying it is easy, with either unscrewing the module using the included swap-tool or just pulling a stick or the D-pad off to change them. The thumbsticks are tight in action, but if you want a bit more sensitivity, you can swap them for taller or shorter sticks. There’s also a doomed stick for those looking for that feel in a thumbstick. If you prefer offset sticks to parallel, it’s possible, with the left module flipping in seconds.

It’s similar if you’re a fighting gamer wanting to use the fight pad, something I’ve never seen a controller do before. Featuring large face buttons down where the right thumbstick would usually be and additional R1 and R2 buttons, it allows you to ignore anything else on that side of the controller without having the thumbstick get in your way. It also presents you with precise button presses, with these buttons having a similar tension and click to a mouse trigger. The fight pad is certainly one of the most unique features offered, and you can install it in under a minute. 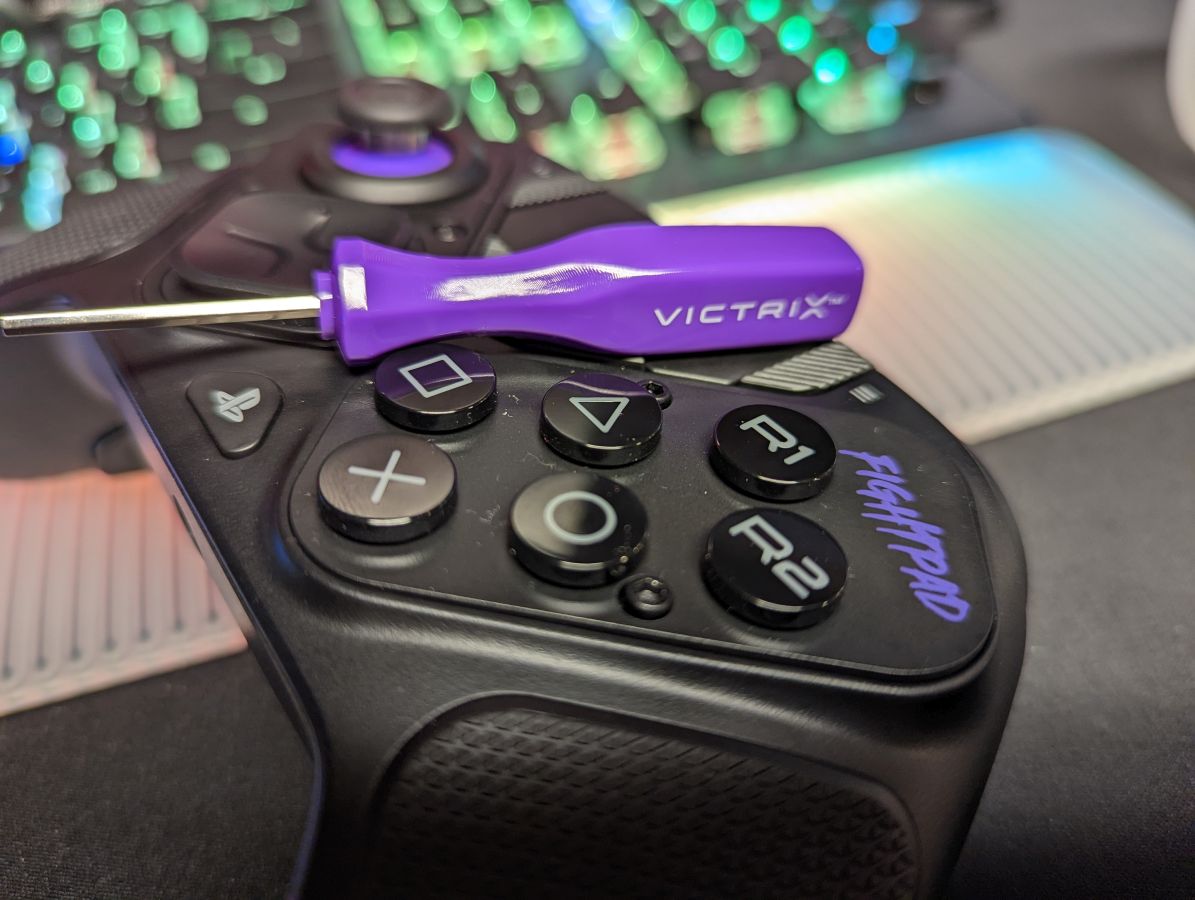 With everything else on the face of the controller working so well, I have to call a little attention to the D-pad. It’s decent, but if you’re playing something where precision is necessary, it’s not your best option. Given the design, it’s a connected D-pad, meaning it’s all combined on a singular button that registers the direction you’re pressing, as opposed to Sony’s individual D-pad. Playing Mortal Kombat 11 and trying out all of the different options for the D-pad, the diamond, the round, and then cross D-pad, the cross D-pad is the best one, but not by a lot. It’s one of the few shortcomings of the Pro BFG, not rising to the same level as the rest of the controller.

I do worry a little bit about the longevity of some of the pieces of this controller. The thumbsticks and D-pad both connect via plastic clicking into place as opposed to a magnetic or locking mechanism. It all fits together tightly, and I’ve had no qualms initially, but the design choice could possibly lead to issues in the future. The team is considering replacement modules and pieces, which would be perfect, but for now you have to live with what you have.

As for using this controller, I have absolutely no problems to report beyond a few misfires. Using the Pro BFG while playing Call of Duty: Modern Warfare has been a dream, with precision few controllers have been able to match. When I say I can put down my Elite Series 2 and do just as well, it speaks volumes about the quality of this controller. The thumbsticks are tight (feel like I’ve said that a lot), the back buttons are amazing, the triggers are responsive (even if a bit hot), and except for a couple of button presses that didn’t register right, everything ran extremely smoothly. I’ve been improving playing the Modern Warfare II multiplayer, and my KD has gone up quite a bit using the Pro BFG, from 1.18 to 1.23. The proof is in the pudding- this controller is the real deal for upping your game. 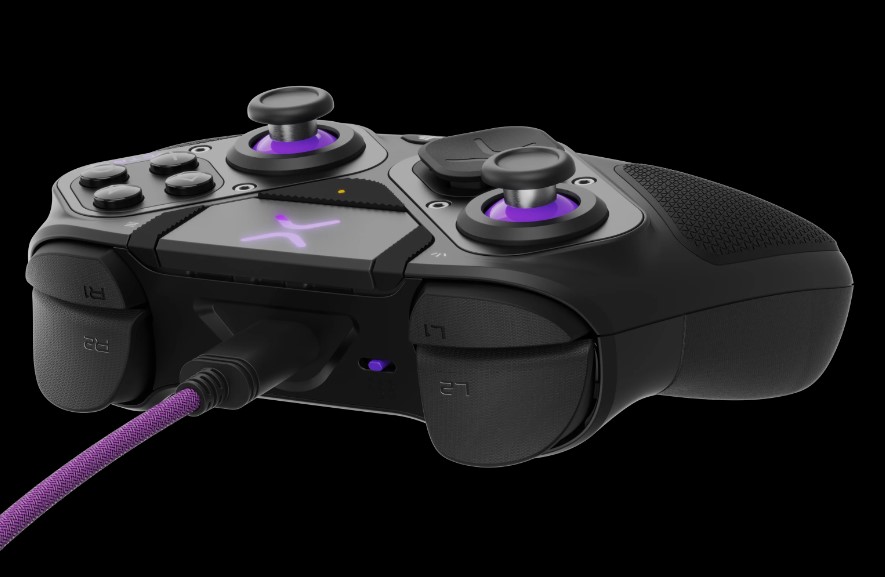 While I play largely wired, the Pro BFG does offer a wireless option. Using a USB-C dongle, you can connect it to your consoles or PC, and it performs admirably. The battery is 2000mAh, which according to PDP should be able to last up to 20 hours. Again, I’ve used it mostly wired, but I’ve not seen any indication that it won’t last that long. If I don’t think about it, it’s good battery life, and the times I’ve used it wirelessly it’s never come up. For a wire, I really like the braided USB-C cable (yay fast charging), which is tucked away in the top of the case. Which, the velcro strap to hold said cable in place in order to close your case properly with everything stuffed inside? A stroke of genius. It’s the little things, people.

I mentioned the back buttons earlier, and they are completely remappable, and it’s simple to do so. Just pressing the profile button on the back along with the button you’re overwriting, then the one you’re copying after the profile indicator blinks. It’s easy and quick, and works instantaneously. 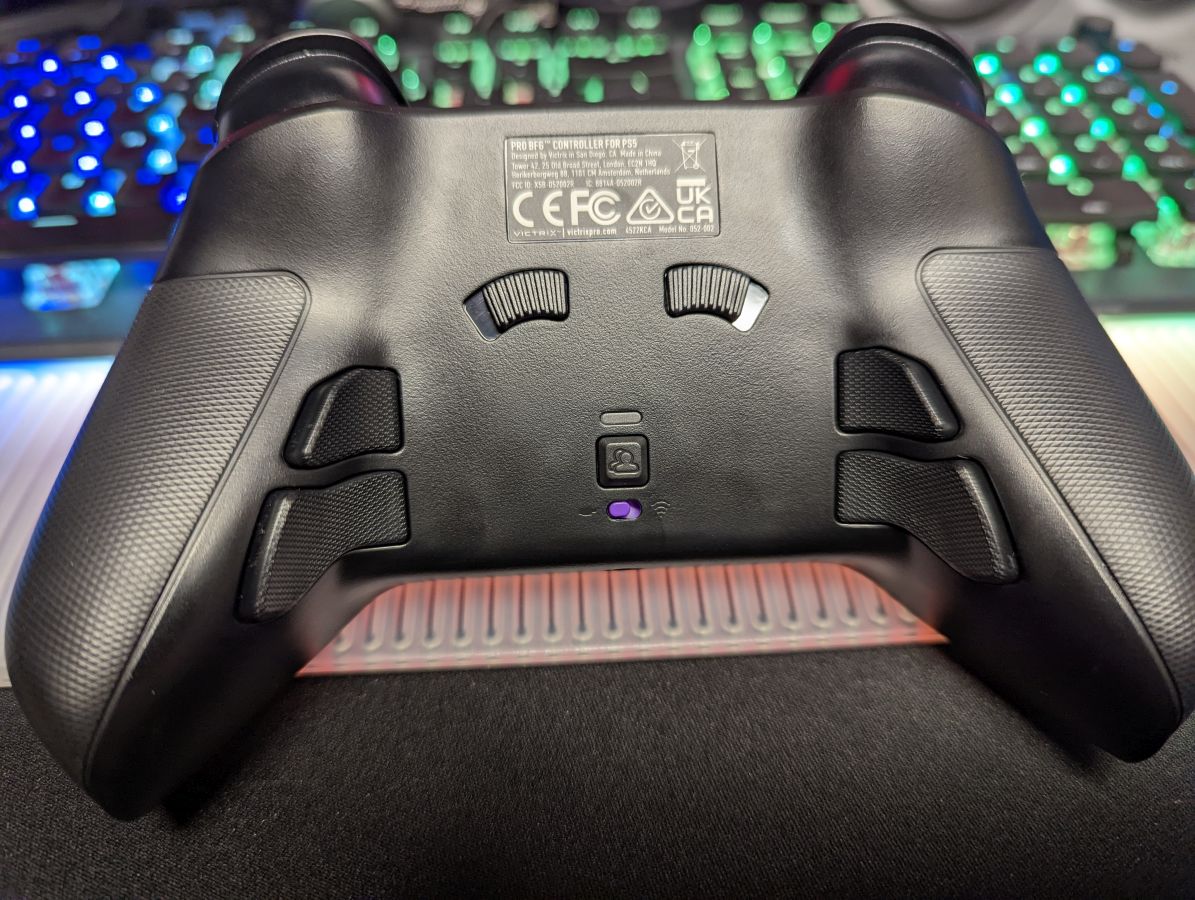 I haven’t been able to put much time into the profiles yet, and I think that’s a product of the Victrix Controller Hub not supporting the Pro BFG yet. The functionality is coming at launch, so for now we can’t use it. What’s insane is the physical level of customization is remarkable, so adding a digital layer to it will only make this controller get better. You’ll get access to updates and even EQ settings, that way you can take full advantage of the audio coming through the 3.5mm jack. The Pro BFG just continues to get better, and it’s completely worth the price tag.

The Victrix Pro BFG controller by PDP is available for pre-order, and is compatible with PC, PS4, and PS5. It retails for $179.99, and you can pre-order it here.

The PlayStation 5 finally has an answer to the Elite controller. PDP’s Victrix Pro BFG is a superb piece of gear, and an accessory you need in your arsenal. It’s versatile, it’s incredibly customizable, and it can compete with the best. The only question you have to answer arrives when your significant other sees it on the bank statement.

David Burdette is a gamer/writer/content creator from TN and Lead Editor for Gaming Trend. He loves Playstation, Star Wars, Marvel, and many other fandoms. He also plays way too much Call Of Duty. You can chat with him on Twitter @SplitEnd89.
Related Articles: Victrix Pro BFG PS5 controller
Share
Tweet
Share
Submit