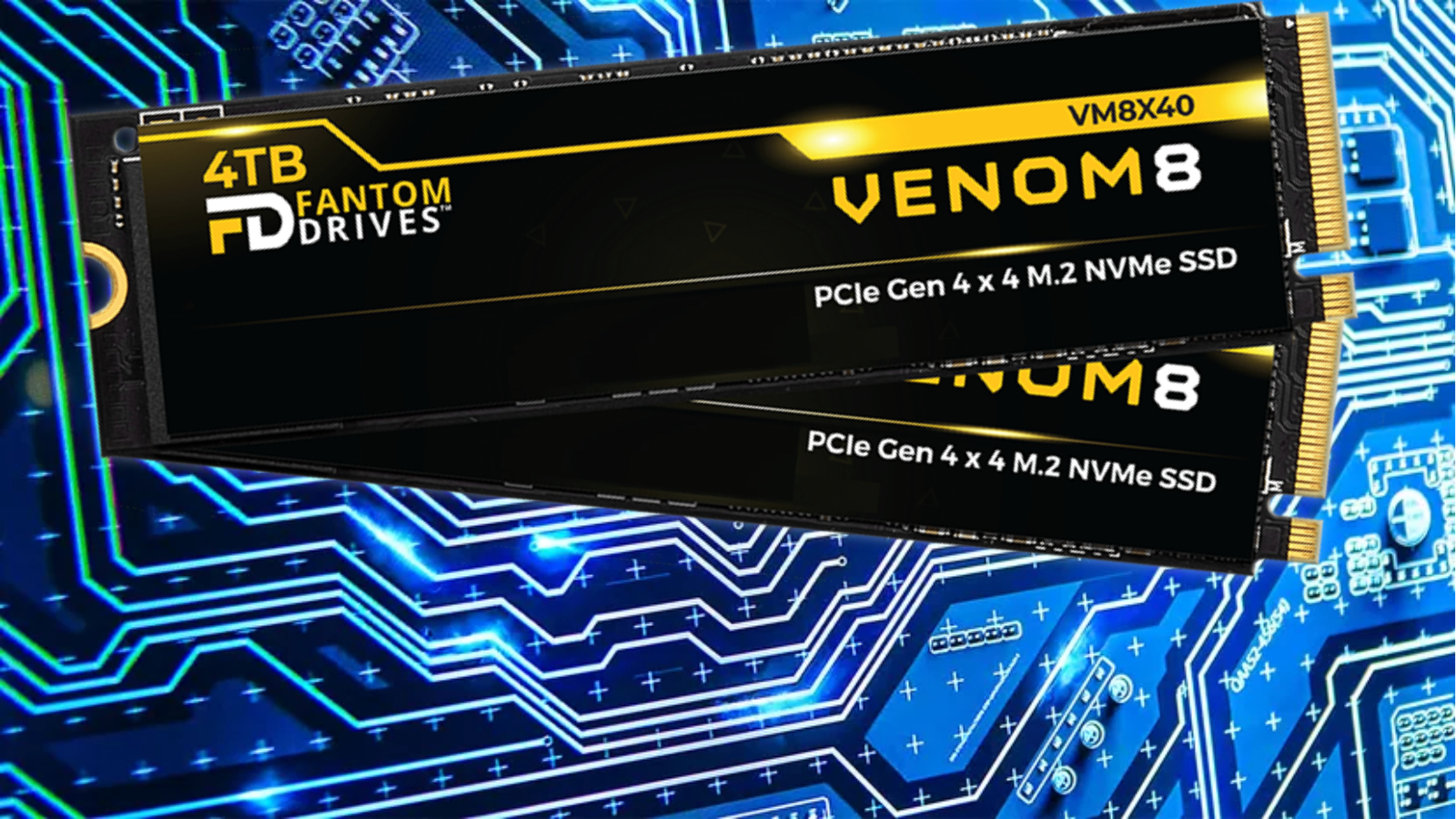 At this point we are having to get mighty specific about our NVMe drive reviews. Over time what has developed is a very wide pool of NVMe drives on the market, and to say they couldn’t be more different would be an understatement. Sure, all NVMe drives will be faster than a standard SSD, and easily 45X faster than any spinning platter HDD, but that does not mean that all NVMe drives are the same. Today we take a look at the Fantom Drives VENOM8’s PCIe Gen4x4 NVMe drive, capable of delivering a shocking amount of read and write speed, provided you have the hardware to take advantage of it. Let’s unbox it, see what makes it stand out amidst some very strong competitors, and benchmark it. Let’s get started.

Alright – we’ve gotta address what has to be the best packaging in the biz. While most manufacturers are simply throwing their NVMe drives into a plastic clamshell and wrapping it in a cardboard box, Fantom Drives went well beyond this with the packaging in that video. There’s no doubt that what you order will arrive when it’s that well protected. Good on ya, Fantom. 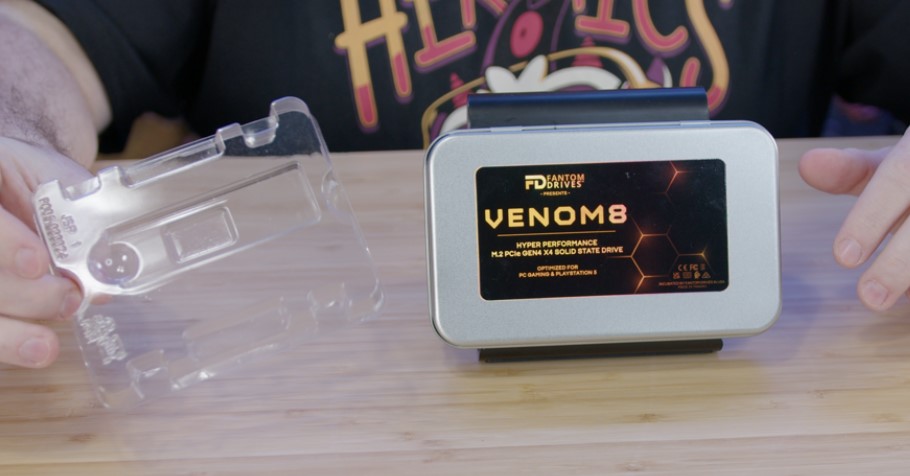 You might recall Fantom Drives from all the way back to the Xbox 360 days when they made an excellent sidecar add-on drive that, frankly, blew the doors off the internal drive of that system. They’ve continued that trectory, releasing a similar sidecar for the Xbox One X, PS4 drive kits for both internal and external upgrades, as well as a whole host of excellent drives for PC. They even have prosumer drives with encryption and high speed backup drives for home use. Now they are dropping a flag into the high-speed gaming drive, offering up an NVMe that will hold up to the demanding speed requirements of a PlayStation 5, as well as delivering enough power for PC gaming and large file editing. As someone who does…well, all of those things, I was immediately interested in what the VENOM8 was advertising.

Before we slot any new drive, we take a look at what the manufacturer is claiming so we can see how close it comes to our tests. Fantom is claiming that the VENOM8 can deliver up to 7400 MB/s read speeds, and 6900 MB/s write speeds, provided you are plugging it into a PCIe Gen 4×4 slot. 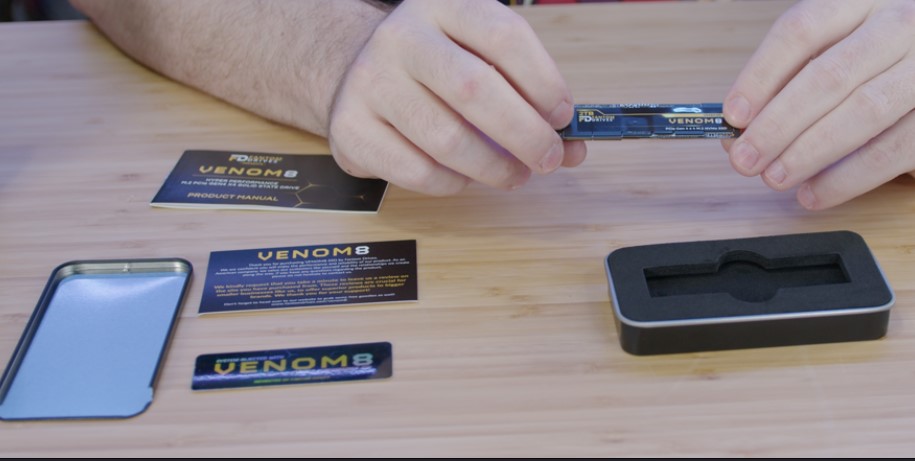 The biggest beneficiary of PCIe 5.0 is storage. Benefitting from a pipeline with a combined throughput of 128GB/s to divide between the PCIe slots, storage, and other PCIe devices, NVMe drives can now reach even greater speeds than the prior generation, in many cases double or better. As I’m testing on an Intel 12900K on a MSI MPG Z690 CARBON, a PCIe 5.0 motherboard, there are 16 lanes to divide up.

As you’ll see in the graphic below, the 20 CPU PCIe lanes are divvied up between graphics, memory, your secondary lanes, monitors, USB ports, Ethernet, and more. With PCIe 5.0, 16 of these are increased to this new PCIe 5.0 data rate of 64GB/s, meaning you can use fewer lanes to achieve the same thing as the previous generation. If you have installed several PCIe drives, as well as a powerful video card, and found that you weren’t getting full speed, it’s likely you’d tapped out your lanes. With 5.0, we should see that a lot less, at least until hardware catches up once again. 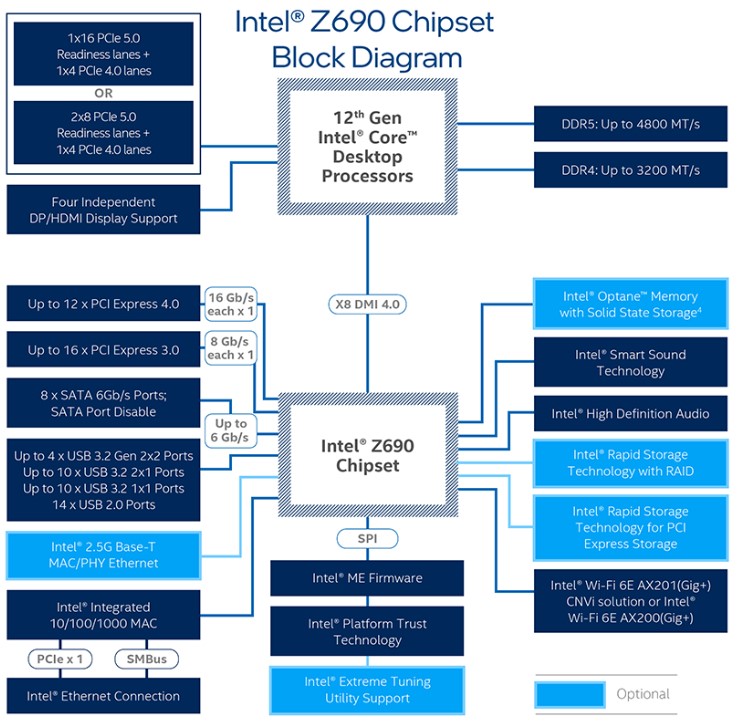 This may surprise you, but the freshly-launched GeForce RTX 4090 is actually a PCI-Express 4.0×16 interface, even if it is using the new PCIe Gen 5 power architecture. This PCIe Gen4 interface provides up to 32GBps of bandwidth in each direction, leaving a lot of bandwidth on the table for devices like the VENOM8. It’s also a great point to issue a warning – benchmark your gear when you install it. Why? You never know when you might have just installed a bottleneck.

If you use multiple NVMe drives in your system, you can find yourself suddenly seeing half speed on your reads and writes. When this happens, it’s almost invariably due to which slot you’ve placed the drive, and how many PCIe lanes you have available to use. As such, you want your NVMe to be located as close to the top slot adjacent to the processor as possible. In many motherboards this slot has a direct pipeline to the processor, making it the fastest on the board. In this case, you might see reads and writes around 3500 MB/s instead of the max speed of 7000. Now that we understand what pipeline speeds are available for this drive, let’s slot it and bench it!

We are big fans of using a variety of testing tools to determine overall performance for drives. As such, we lean on CrystalDiskMark, ATTO, PassMark, and 3DMark. We also run all of these utilities multiple times, and empty, half full, and nearly full to ensure we are getting consistent behavior. 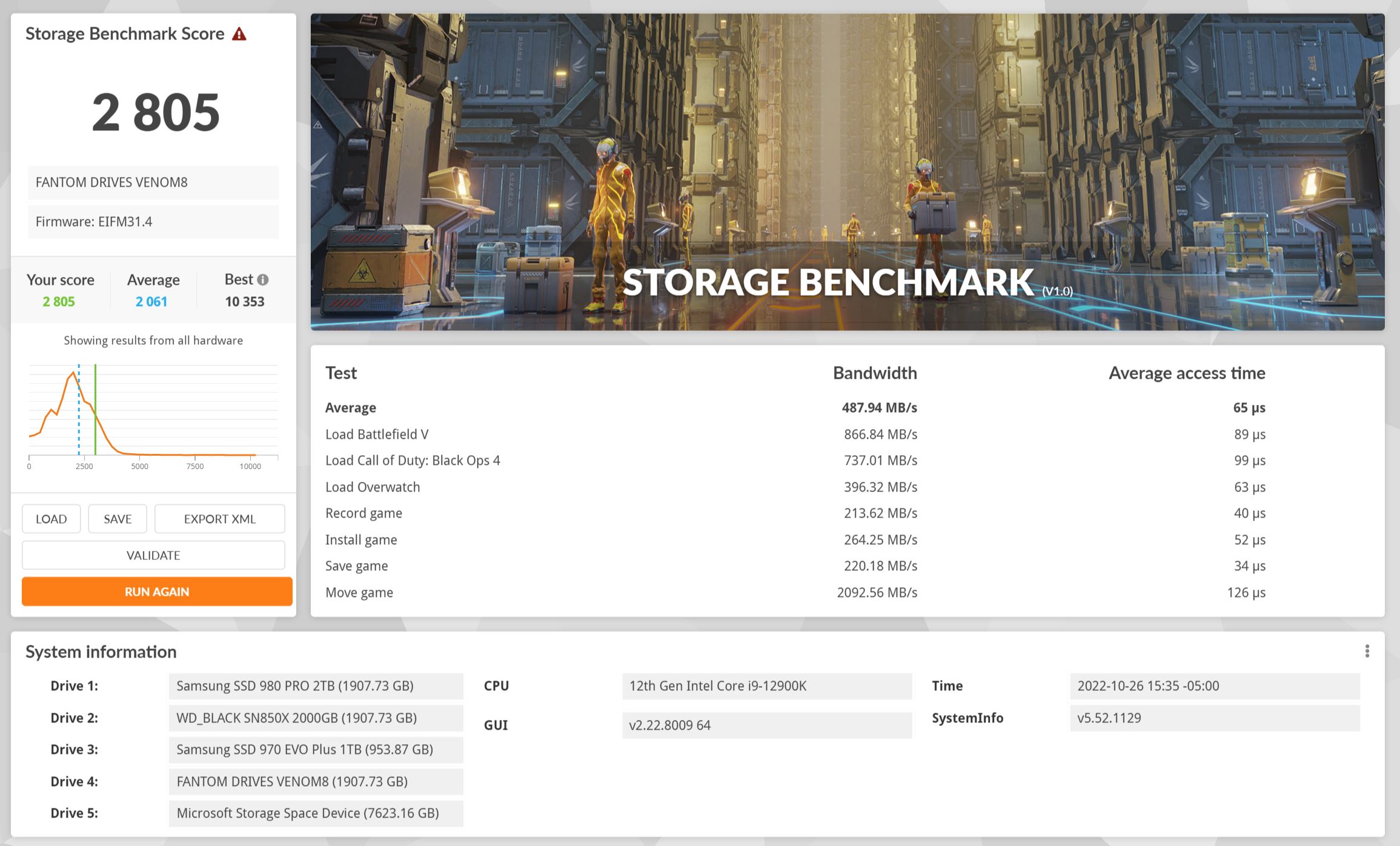 These are benchmarks only using 4X lanes. 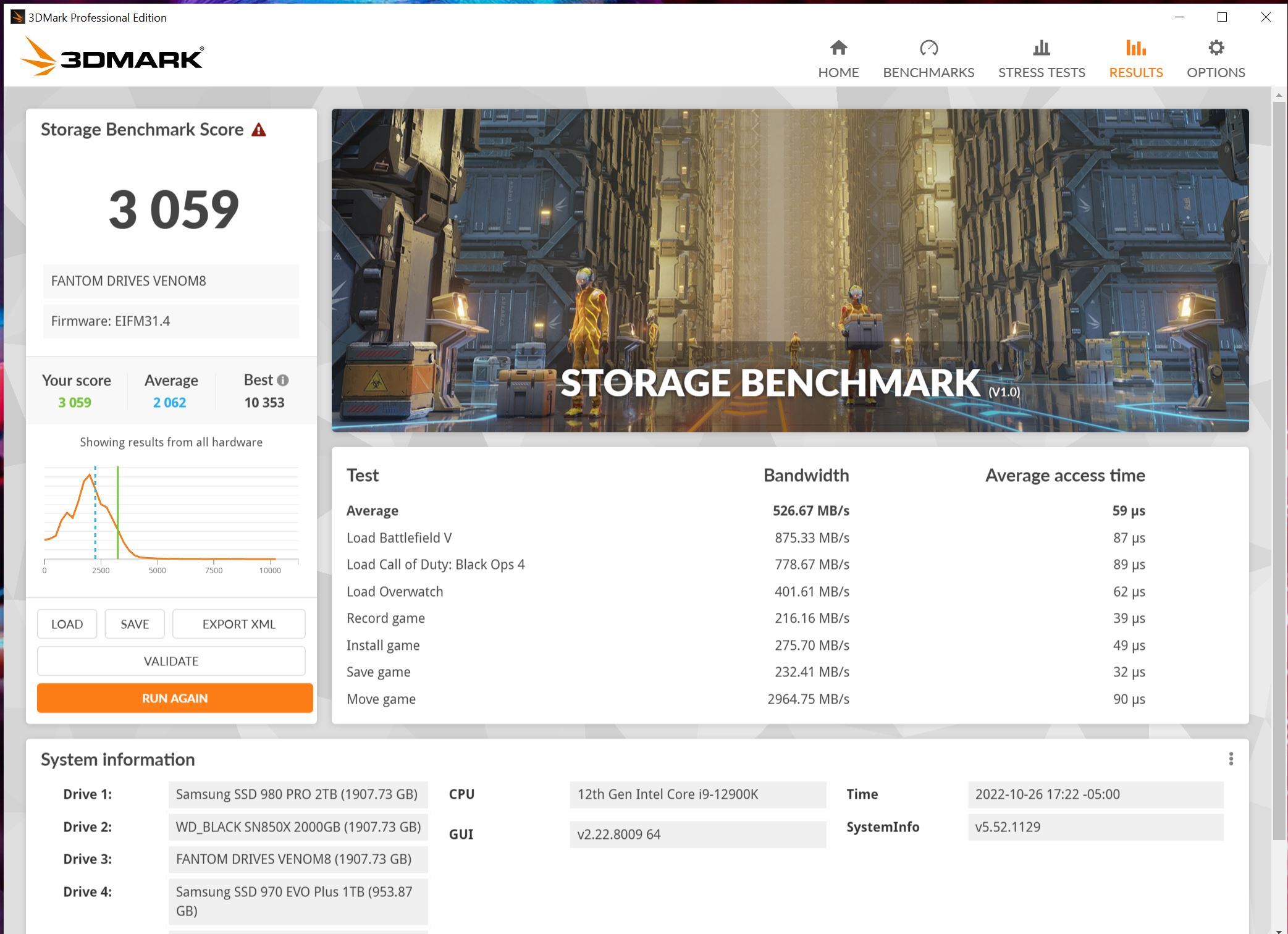 These are benchmarks utilizing the full 8X PCIe lanes.

3DMark does a great job of providing a single all-in score which is ultimately useful for comparison. We do see some real world puts, gets, moves, and copies here, as well as latency numbers. I personally use 3DMark as a way to see if the latency figures match what’s on the tin, and in this case they do.

ATTO is one of the older, but still reliable benchmarking utilities we use frequently. It showcases speeds across a wider variety of file sizes. When you are moving or copying a whole folder of goodies, there’s a chance there are tiny files like .dlls as well as large files like cinematics. This shows what that could look like over sustained write times. 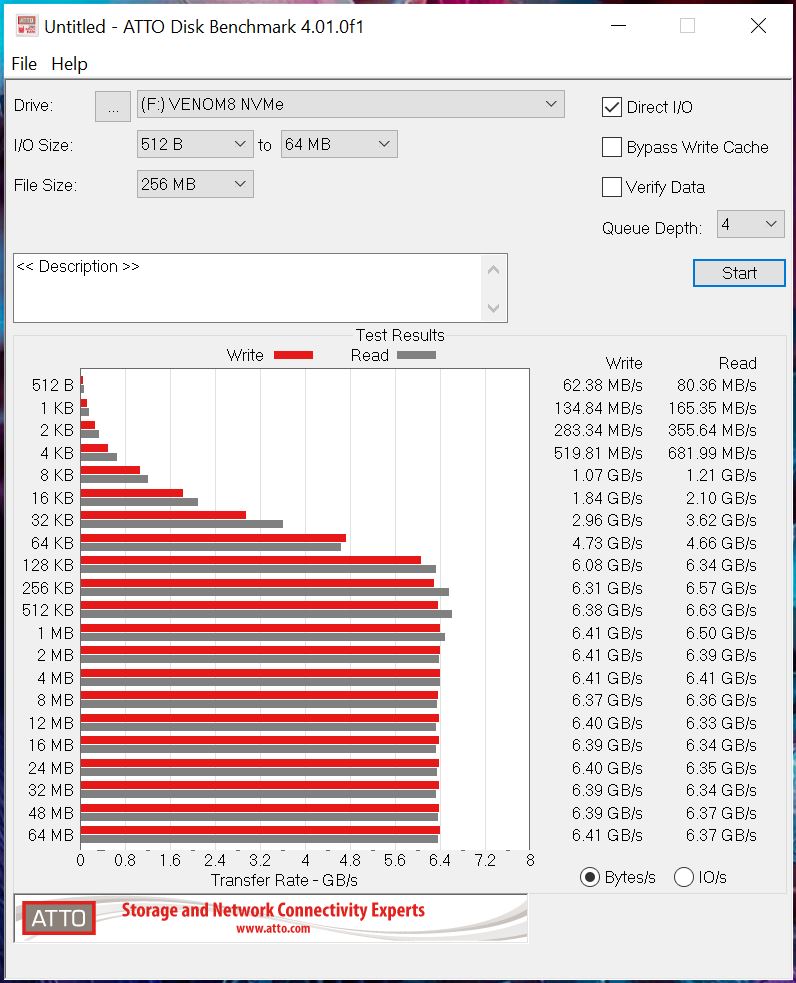 CrystalDiskMark is another utility we use to confirm against our other benchmarks. It doesn’t provide the same levels of detail as an ATTO benchmark with an all-in number, but it does show what sort of speeds the drive will deliver when the pedal is jammed all the way to the floor. 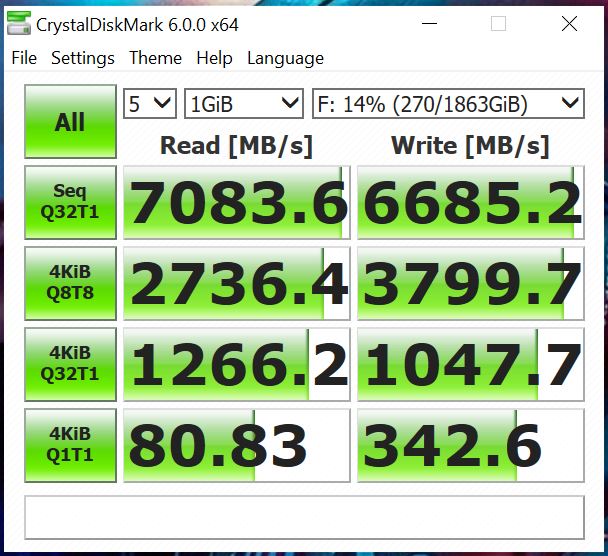 The numbers don’t lie. No matter which benchmark you look at, the Venom8 is delivering every drop of what is advertised on the box. Provided you’ve got the Gen4 PCIe slot speed to take advantage, this is our current speed leader – nobody else is moving this fast!

Under the hood, the VENOM8 is a 176-layer 3D NAND from Micron, with 2GB of SK Hynix DDR4 DRAM cache. It is equipped with TRIM support – a command that designates areas on the SSD as “ready for deletion”, deleting that data at the next idle opportunity. This “Active Garbage Collection” is important as drives are not overwritten in the same way as traditional HDDs. The drive also supports S.M.A.R.T. (Self-Monitoring, Analysis, and Reporting Technology which can provide a warning if your drive is experiencing failure events), APST (Autonomous Power State Transition – the power management system for NVMe drives to ensure they have adequate power for maximized throughput), and LDPC ECC (Low-Density Parity-Check Error Correction Codes — a linear error correction code mostly used in enterprise-class drives that allows the system to recover from accumulated flash degradation and bit errors from constant writing and erasing of the NAND cell), making for an extraordinarily resilient and reliable drive. What happens if it does happen to fail, though? Let’s talk about warranties.

If you read GamingTrend.com for any length of time you know I’m a stickler for warranties, bad-dogging companies who deliver high end hardware and then can’t stand behind it. You’ll be happy to hear that Fantom Drives believes in the VENOM8, providing a 1 year warranty if you don’t register, but bumping that to 5 years if you do. I dig that they stand behind their product, and that they are matching the top tier manufacturers – well done.

I’ve gotta give credit to Fantom Drives for the small instruction manual they’ve included with the drive. There’s a QR code to show you precisely how to install and format the drive for PlayStation 5, as well as a full walkthrough of how to install the drive in a PC. It even goes so far as to walk you through how to open the Disk Management system in Windows to ensure you properly format the drive as a secondary storage device, or how to use it as a primary boot drive as well. It’s not often you get any instructions whatsoever, so it’s a welcome addition.

Whether it’s video production, gaming, or anything in between, this Venom8 drive from FantomDrives is ready for it. I’m amazed at the speeds and latencies that this drive is delivering, and whether you are using it in a PC or a PS5, you’ll be set.

Delivering the speed advertised on the box for both reads and writes, the Venom8 has set a new bar for NVMe drives. Whether you put it in your PC or in your new PlayStation 5, you’ll have more than enough juice for your games to run wild.

Ron Burke is the Editor in Chief for Gaming Trend. Currently living in Fort Worth, Texas, Ron is an old-school gamer who enjoys CRPGs, action/adventure, platformers, music games, and has recently gotten into tabletop gaming. Ron is also a fourth degree black belt, with a Master's rank in Matsumura Seito Shōrin-ryū, Moo Duk Kwan Tang Soo Do, Universal Tang Soo Do Alliance, and International Tang Soo Do Federation. He also holds ranks in several other styles in his search to be a well-rounded fighter. Ron has been married to Gaming Trend Editor, Laura Burke, for 21 years. They have three dogs - Pazuzu (Irish Terrier), Atë, and Calliope (both Australian Kelpie/Pit Bull mixes).
Related Articles: Hardware, VENOM8 NVMe SSD
Share
Tweet
Share
Submit