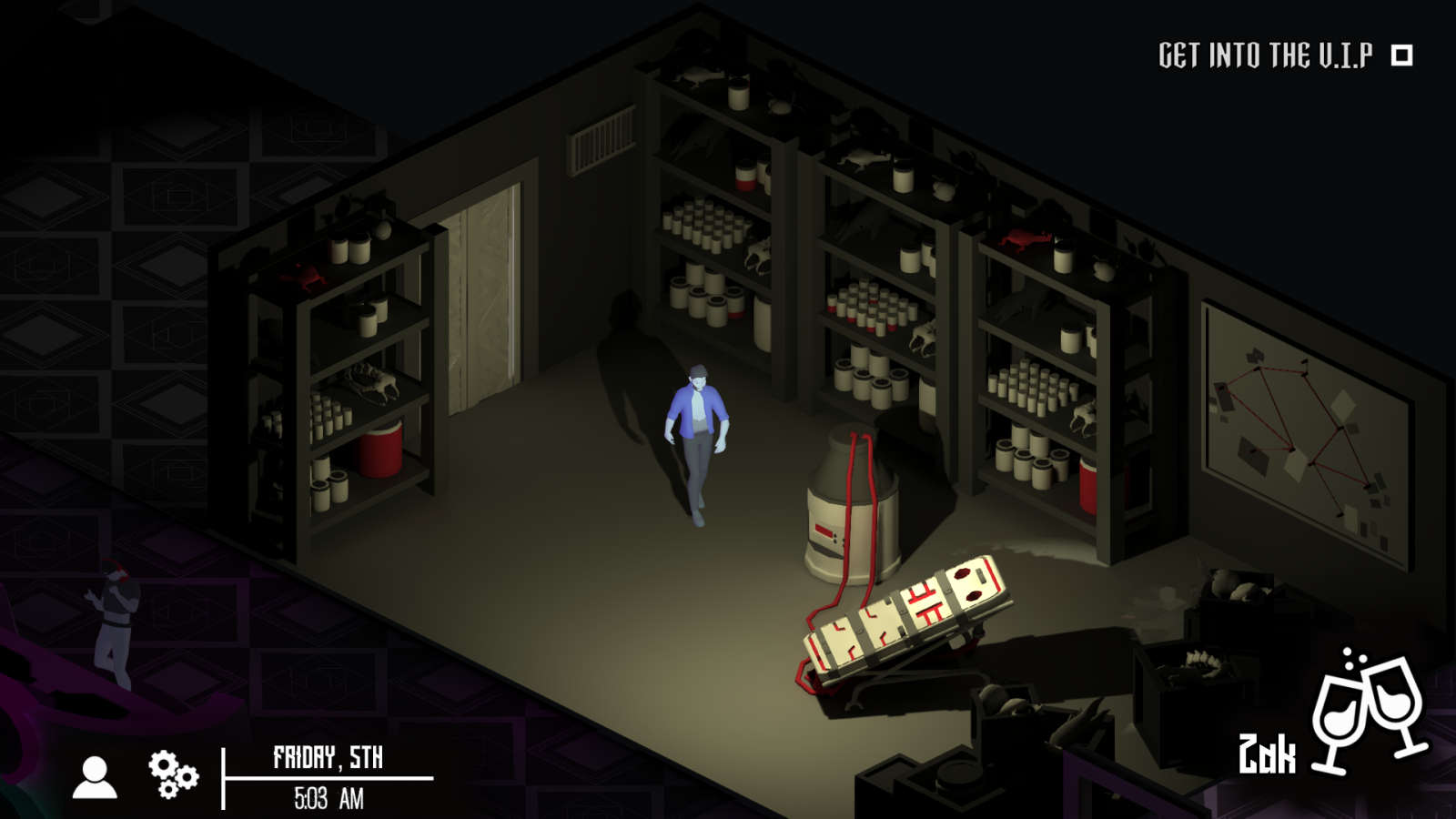 It’s not often we see games that are the equivalent of short stories. Heck, nowadays people get upset if a game you pay 10 dollars for isn’t at least 10 hours long. Some recent World of Darkness games have been filling this niche, however, such as Heart of the Forest and today’s topic: Vampire the Masquerade: Bloodlines – Heartless Lullaby.

You play as both a human and a vampire when their paths cross in this CRPG style adventure game. Think Disco Elysium but without the character building. Zak and his buddy Johnny are on a bender about to go home, when they suddenly see an eye-catching woman walk into the Heartless Club. However, the lives, or unlives, of everyone involved will undoubtedly be changed for the worse. It takes less than 45 minutes to reach the conclusion, and it’s certainly interesting enough to keep you engaged for that time period.

Within those 45 minutes, you’re free to walk around the club, interact with things, and most importantly progress the story. You can press tab to see what you can interact with, which admittedly isn’t much, but a few people and objects have multiple choices or skill checks attached to them. Skill checks factor in your stats with a dice roll, but since you can’t build a character they’re just random chance. It’s an interesting system to build off of, since this was a game jam experiment, but it feels a little pointless here.

In all honesty, there’s not much to Heartless Lullaby. I’d say there’s about 15 minutes of text to read through, and 30 minutes of waiting for your character to slowly walk over to whatever you clicked on. As far as I can tell there’s no way to speed this up, but you can use a controller to feel like you’re actually playing something. 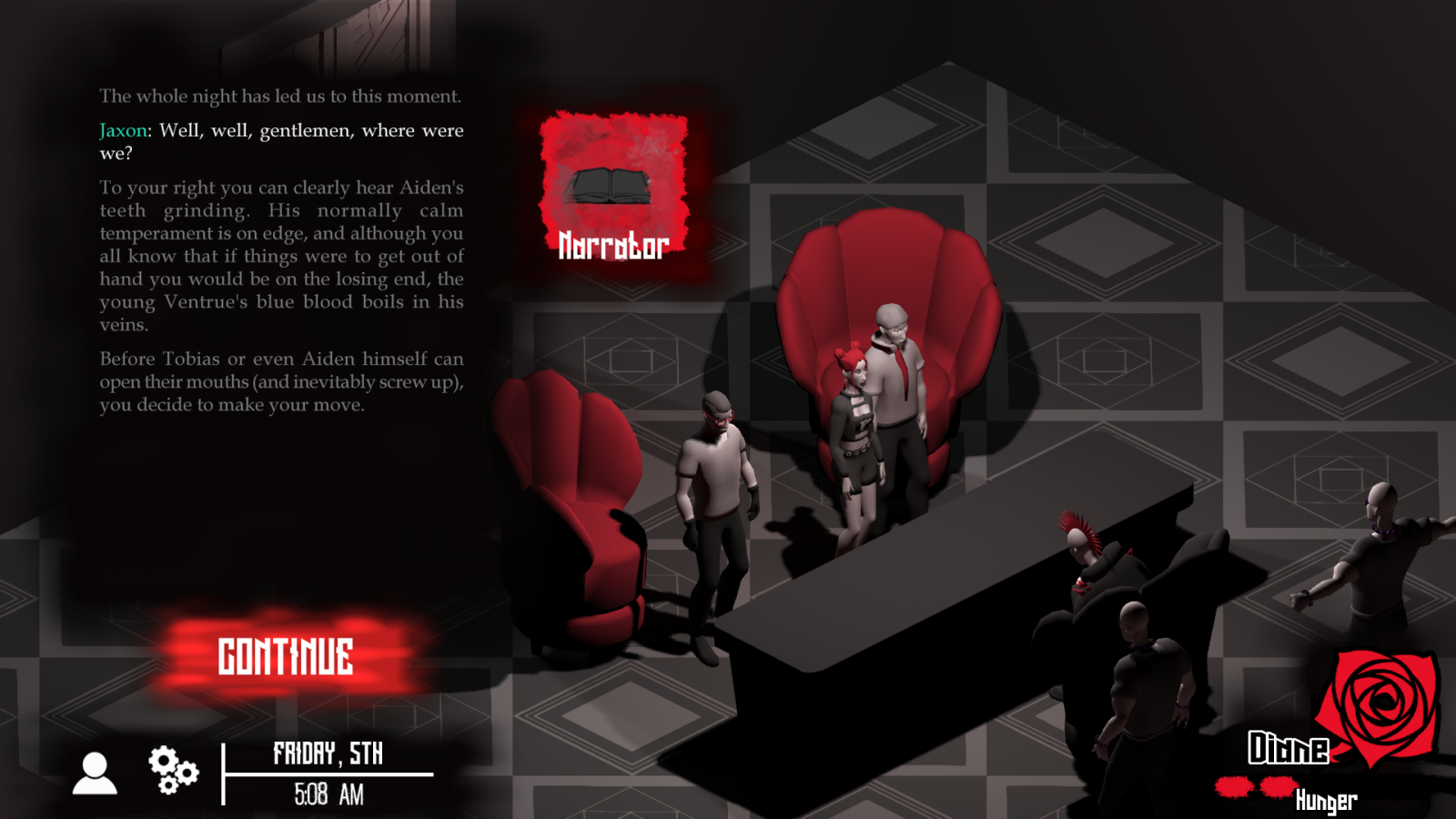 The story feels fairly rote for a VtMB game. If you’ve played the TTRPG or one of many previous games, you know exactly what you’re getting into. Unfortunately it feels unpolished, the writing seems a bit off at points and the UI is rudimentary at best. The biggest standout, however, are the visuals. The game is mostly monotone, with gray characters and environments, but the occasional splash of color makes things like bloodstains or someone’s hair color stand out. It’s a nice art style that emphasizes certain character traits and feels as bleak as the World of Darkness setting is supposed to be.

Vampire the Masquerade: Bloodlines - Heartless Lullaby feels less like a full game and more like a short proof of concept. It’ll be interesting to see what this free game evolves into, if anything, but if you’re into the World of Darkness it’s worth taking a look.

David is the kind of person to wear his heart on his sleeve. He can find positives in anything, like this is a person who loved Star Fox Zero to death. You’ll see him playing all kinds of games: AAAs, Indies, game jam games, games of all genres, and writing about them! Here. On this website. When not writing or playing games, you can find David making music, games, or enjoying a good book. David’s favorite games include NieR: Automata, Mother 3, and Gravity Rush.
Related Articles: Indies, Vampire the Masquerade: Bloodlines - Heartless Lullaby
Share
Tweet
Share
Submit