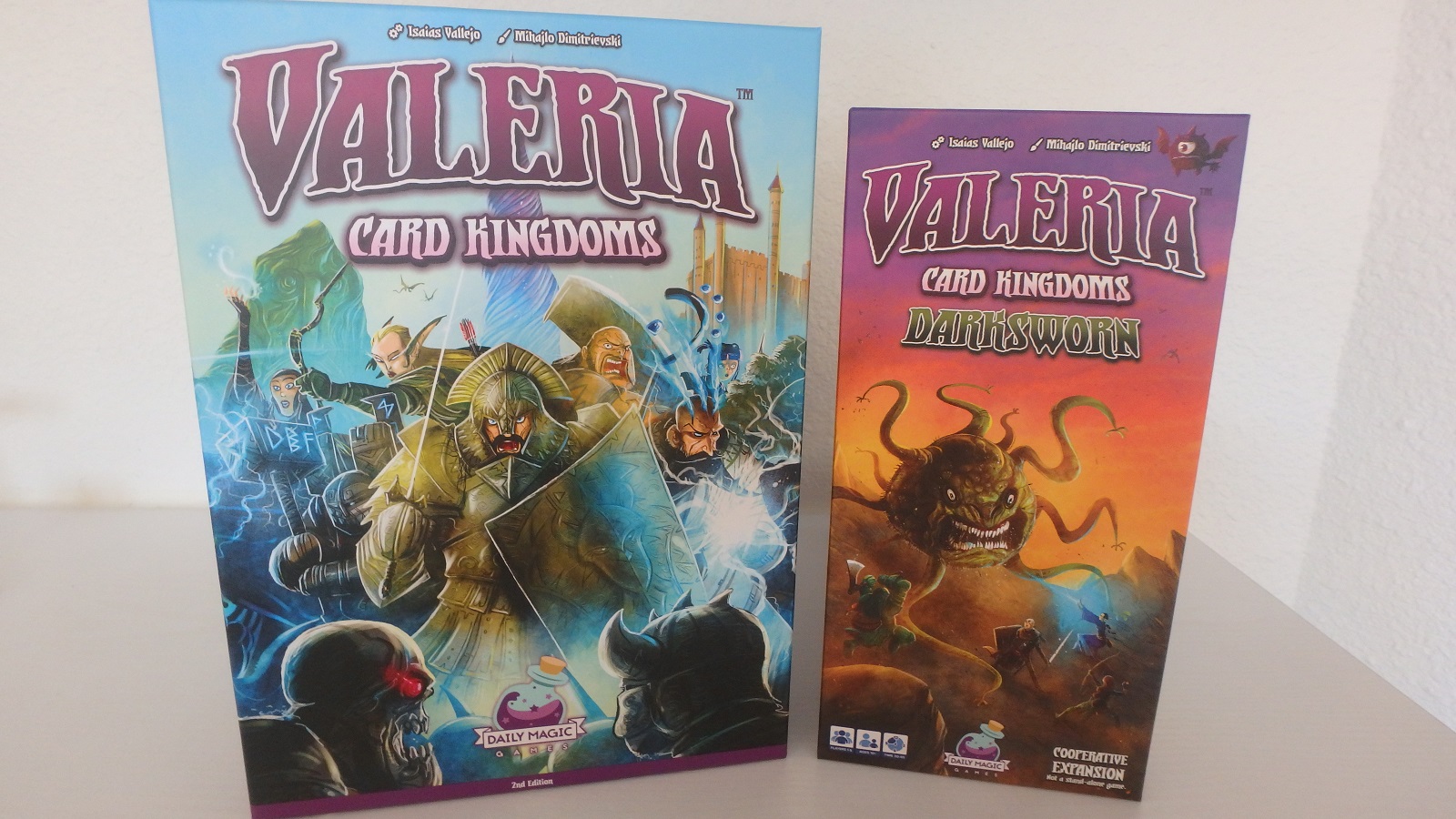 I’ve had a rough time trying to pin down Valeria: Card Kingdoms.  While it seems like Valeria always has one hand outstretched to give you more, more, more, its other hand is oppositionally constantly ready to take. On its surface, Valeria is an extremely generous game in an already generous genre; similar to Machi Koro and Space Base before it, Valeria is a tableau building game where players buy cards and roll dice, acquiring resources if the results correspond to cards in their tableau. Where Valeria sets itself apart, at least in generosity, is that not only do players roll two dice and generate resources on both die and the roll’s sum, they also generate these resources on every other player’s turn as well, albeit at a reduced rate.

This leads to Valeria generally having a rather nice initial arc- in the beginning, players are struggling to cobble together any sort of engine, but very quickly are practically drowning in resources. The game comes with an abundance of +10 markers for resource tracks, and boy, are you gonna need them. Problem is, every player’s turn only allows for two actions: whatever combination of buying a citizen card, killing a monster card, or buying a domain. In order to ensure you have enough resources to carry out both actions and keep up with the increasing costs of everything, you’re going to have to build a relatively robust tableau of citizens, but afterwards you will just never be resource poor again. In all of my plays, there has never really been a gray area where you’re not sure if you have a sufficient engine- it has simply been a binary switch of struggling to absurdly rich. 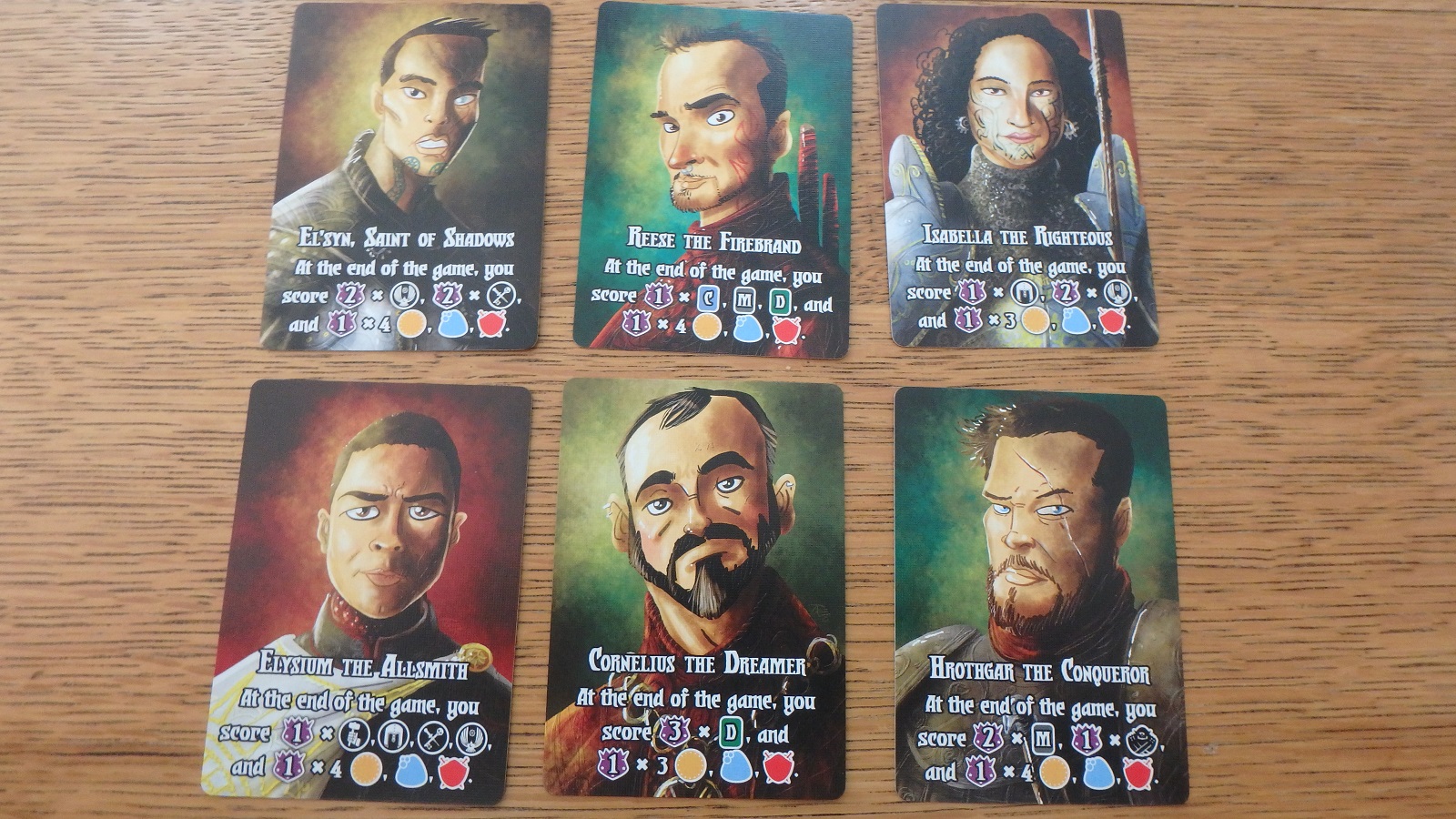 All of that would be fine, except for Valeria: Card Kingdoms’ most stingy mechanic, the dukes. At the beginning of each game all players are dealt two duke cards and keep one, which will have the criteria for how they score at the end of the game. Most of these score for two of the game’s four icons that appear on citizen and domain cards, with a few scoring for card types; all will have a conversion rate for leftover resources into victory points. As you might imagine, this severely narrows players’ decision spaces; it’s almost always best to just buy as much as you can of whatever icons you score on. Dukes also extend the already over-long setup, since you’ll want to make sure you have a healthy mix of the various icons in the citizen market so nobody is screwed by their duke options. However, there is one duke that simultaneously seems broken and has become my house rule to fix all of this: Russel the Firebrand simply rewards a point for each card obtained. While this feels unbalanced when everyone has their own unique duke, since he not only rewards players for doing whatever they feel like, it also allows players to do whatever they feel- so I’ve started simply using him as the scoring metric for everyone. There is a no duke variant provided in the rules, but the multipliers only exist in the rulebook, so I’ve found it easier to just use a card that everyone can see and easily remember.

Flipping back to an area where I have found Valeria to be extremely generous, this game’s production is quite nice, especially for its price point. In a game that revolves around rolling dice, those dice immediately become the most important component, and these dice are big and chunky and fun as hell to roll. The art, while not my cup of tea, is done by Mihajlo Dimitrievski, who has garnered acclaim for his work on the West Kingdom series. The absurd amount of cards in this game are all full-size and have a nice linen finish, and the resource tracking tokens are some nice chunky wood. Finally, this is the first insert I haven’t thrown away in years, and combined with the card dividers, is essential to keeping set-up and tear-down from becoming a nightmare. 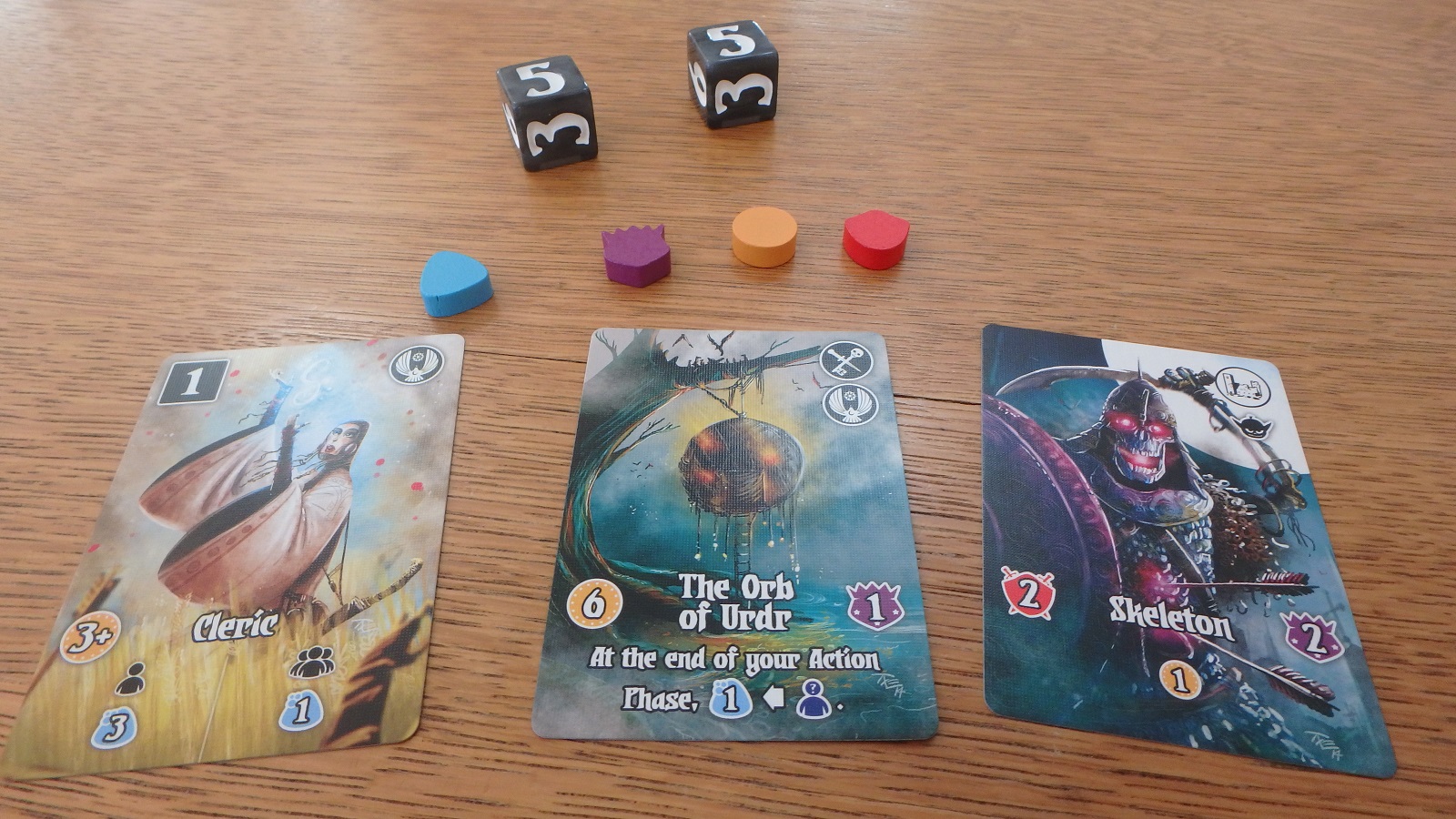 Honestly, all this would culminate in a game that I would not hesitate to recommend, if it wasn’t for the theme. Valeria’s theme arguably had to be paper-thin due to its gameplay, and yet out of all the options available for a lightweight game I can put in front of my non-gaming family, Daily Magic decided to go with the most generic fantasy imaginable. I understand that publishers are trying to expand their IPs, but if you put a gun to my head and demanded that I explain how Terrinoth, Valeria, and countless other generic fantasy publisher IP settings are different, I’d ask for time to write my will. It’s especially egregious when this could have been themed around sports or running a business or having a nice meal or literally anything that wouldn’t scream “this game is for big ol’ dorky neckbeards” after a simple glance at the box art. Do better, board game publishers.

I really don’t have too much to say about the Darksworn expansion. If you have Valeria: Card Kingdoms and felt the need to transform it into a cooperative game, then Darksworn is the answer to that desire. It consists of a several session long campaign which introduces some honestly interesting mechanics that I won’t spoil, and rules to run standalone games. The campaign is themed around driving back an evil that threatens the kingdom or somesuch, but in keeping with its generic fantasy setting, I wanted to take a nap after reading the first sentence of the fluff. The real draw for me was the extra monsters and events that work with the base game, although as I understand it, there are expansions which are strictly for the regular competitive mode which would steer people to before Darksworn.

Valeria: Card Kingdoms is another entry into the dice rolling/ tableau building genre of board games, and I’d be lying if I said it wasn’t generous. From the abundance of resources to the variable setup keeping it fresh to the nice production, there’s a lot in this box to like. I just wish that Daily Magic had decided to theme it in a way that would be more appealing to casual and non board gamers. Darksworn is perfectly fine if you pick up Valeria and wish it was coop instead of competitive.

Nick grew up reading fantasy novels and board game rules for fun, so he accepted he was a dork at an early age. When he's not busy researching the intricacies of a hobby he'll never pick up, Nick can be caught attempting to either cook or befriend local crows.
Related Articles: Tabletop, Valeria: Card Kingdoms
Share
Tweet
Share
Submit