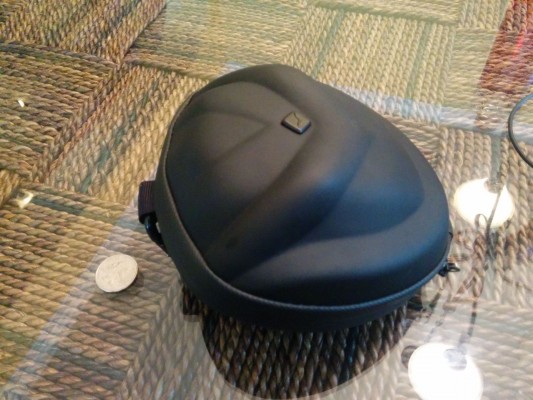 If you spend as much time writing and travelling as I do, you understand the importance, not only of great sound, but also the portability of a good set of headphones. Over the years I’ve swapped in and out of full sized can headphones, earbuds, and everything in between, but there are always tradeoffs. If I use my noise-cancelling headphones I can block out everyone on the plane and immerse myself in whatever media I’ve chosen, but they come in a bulky hard case that eats up a lot of space in my carryon. If I go with the earbuds they are obviously compact, but over a long flight they begin to hurt my ears, and they simply don’t match the richness of sound of a pair of cans. As one of the drivers died on my current pair of headphones, it was time to find a replacement.

After a bit of research I stumbled upon a company called V-MODA. Endorsements aside (though there are quite a few from such names as Paul Oakenfold and The Crystal Method), the company promised unparalleled design, an extremely compact form factor, and modularity to boot. Could these be the headphones to replace the plethora of cans I use at home, while also satisfying my portability problem? I checked out the V-MODA Crossfade M-100 and a few accessories to find out.

The case is much smaller than I thought it’d be.

The Crossfade M-100 arrived in a clamshell far too small to be the headphones I ordered. With a carabiner hanging off one side, and a fully-sealed zipper, the M-100’s clamshell is roughly the length of a Nexus 5 cellular phone. The zipper mechanism, though not advertised as a big feature on their site or the packaging, was completely fascinating to me. The teeth remain recessed behind the protective exterior, allowing the heavy-gauge zipper to glide around the shell easily, while still protecting the teeth and the precious contents inside. The clamshell is an extremely sturdy ethylene-vinyl acetate, form fitting for the folded headphones.

Opening the clamshell revealed the headphones themselves, of course, but also showcased the hinge system that allows them to fold up in such a compact form. Using a lightweight and thin steel frame, the the Crossfades connect to a well-padded, flexible, but form-fitting headband sporting the V-MODA logo on the top that they claim is indestructible. Not unlike some of the e-sports branded headphones on the market, the Crossfade also allows you to remove the side shield plates, but in this instance they are aluminum, not cheap plastic. This gives you the opportunity to have them engraved with a basic logo or your gamertag from V-MODA for just $25.00.

Basic sides can be customized for just $25

If you’ve ever had a pair of headphones or a mouse go bad on you, it likely wasn’t an internal problem to the device – the likely culprit was the cord. A few manufacturers have wisened up to this, putting a braided jacket over the cords. V-MODA has taken it a step further, providing a dual-color thicker braided cord, complete with an angled jack and a share jack built right in. Now you can share your music on the plane without needing to carry a set of adapters. Thankfully, the removable cord can be plugged into either side of the headphones, courtesy of a removable cap on the bottom of either side of the M-100.

The secondary port has another function that, again, you’ll be glad you can use one on either side. The Crossfade M-100 is modular, and with the BoomPro you’ll be able to plug it on the right or left side of your head, allowing you to place the microphone as you see fit. The flexible mic can be adjusted all the way from the base to the microphone itself, meaning you can even shape it to rest wherever you’d like. Best of all, the V-MODA team has also braided the cable (albeit with a smaller jacket) and included the same angled jack on the opposite end. In use, the microphone is crisp and picked up my voice very well. Since the microphone is reversible, it did pick up some of the ambient noise in the room off of the microphone pickup on the opposite side, though not as much as I would have expected.

Modular microphone can be placed on either side.

The M-100 ships with a pair of very comfortable ear cups made of memory foam. They sit comfortably on the head, and unlike most headphones at this price range, they are user-swappable. The soft pleather covers the ears completely, but are deep enough for most people. If you’ve got a need for a larger set of cups, or just want to swap them out for something even more comfortable, V-MODA also offers a pair of XL cups that are twice as deep as the stock ones, and 30% larger in diameter. Whether you spend a great deal of your day listening to music while you crank away on a keyboard, or if your time is spent cutting down your enemies on a console or PC, even the stock cups are pretty comfortable. The XL headphones do alter the sound profile a bit, but I did a five hour marathon in the wastelands of New Vegas and never thought about my headphones. You can’t really go wrong either way.

The Crossfade M-100’s are not a powered solution, so you won’t be using up batteries. It also means that the noise cancellation functions are more analog and passive. In practice I found that it had more of a muffling effect than a noise cancellation, and that makes sense because…science. Without a counter sine wave of noise to act against the existing waveform, you can’t get a ‘cancelling’ effect. Still – the drivers in this headset are more than ample, even at a lower volume, to eliminate any background noise.

The speakers in the M-100 are a pair of 50mm dual-diaphragm drivers. Most headphones are single-driver (and is even more common in cheaper earbud designs), meaning the entirety of your sound is generated by a single driver. When you start getting into the better range of headsets you start seeing dual-diaphragm designs. Pushing closer to the $500 and higher mark you begin to see multiple drivers. Multiple drivers allows for a design that can split frequencies, pushing highs and lows into separate drivers using a ‘crossover’ for a cleaner sound. From my experience, the multi-driver systems drone incessantly about how much bass they can pump into your ears, but make few claims on the quality of sound. The M-100’s don’t have this problem – they sound absolutely amazing.

The XL cups are very comfortable, but so are the stock pads.

I’ll qualify this review with acknowledgement that I am, in fact, 75% deaf. I lost a good portion of my hearing due to a military accident. It’s hardly a superpower, but it has had an interesting effect – I can immediately tell the difference between a cheap pair of headphones and an amazing set. With the extensive damage to my hearing faculties, a good set of headphones is the equivalent of emerging from a Vault in Fallout – it’s a sharp and immediate change from the norm. I hear a constant whining (tinnitus) and a lot of bass-heavy songs have a muddy sound. A good set of headphones do a great job of cutting through this, allowing me to enjoy music (almost) like I used to. Conversely, a bad pair simply makes everything louder. As is often the case, quantity does not equal quality.

To test out the M-100 I used a wide variety of music. Rush is my favorite band, so naturally I cranked up some of their greatest hits. It was, as I’d hoped, a trip down memory lane, allowing me to hear Neil’s incredible percussive voodoo crisp and clear. I’m also a fan of Jazz, so The Rippingtons were my next stop. In either case, whether I was checking out their earlier tracks, their synth-dominated middle period, or their guitar-heavy modern tracks, they all came through clear as a bell and had my head nodding. North Shore was positively amazing with it’s complex beats and guitar solos. Flipping over to some EDM and Chiptunes had me the most excited.

I’ve never been this impressed by a zipper.

With the damage to my ears, I’d all but lost the ability to clearly hear chiptunes as they often use higher frequencies that are unfortunately lost to me. Hitting up some tracks from DJ Cutman (I highly recommend his rendition of Strike the Ground from Shovel Knight featuring Kevin Villecco) and some Deadmau5, Bassnectar, and Knife Party (the intro to Centipede was just gross sounding in my ears!) I was able to hear portions of his songs I’d never heard before. That’s when you know you’ve got a great set of headphones in your hand – when you can experience music in an entirely new way.

To round out this review, I did want to talk about V-MODA’s incredible warranty program. A great many warranties are 90 days, or at best a year. V-MODA extends this out to two years, tacks on a 60-day test drive guarantee (minus shipping, of course), and throws something called “Immortal Life” on top of the whole package. If your headphones fail, for any reason, you can work with the V-MODA team to receive 50% off of a replacement set…for life. That’s right — if you remain a loyal customer you’ll receive a staggering half off your next purchase, forever. I’ve never seen a company so sure of their own products, and after experiencing the M-100 it’s easy to see why. I don’t know how their lower-priced offerings fare, but the M-100 is aces in my book.

The M-100 folds up into a very compact form.

What impresses me the most about the V-MODA is the overall attention to quality. Points that might break after extensive use are not glued, but double-reinforced with steel screws. Any points that might need to bend are braided cable, or have a hard plastic angled piece to prevent pinching the wires. Even the wires come with a small piece of velcro strip to bundle them up cleanly. It’s clear that they spent their engineering dollars constructing a solid product, not the cheapest one they could manufacture. You’ll certainly pay a bit more for that, but when a product is this well built, it’s worth it. The musician / audiophile in me highly recommends the V-MODA Crossfade M-100.

Ron Burke is the Editor in Chief for Gaming Trend. Currently living in Fort Worth, Texas, Ron is an old-school gamer who enjoys CRPGs, action/adventure, platformers, music games, and has recently gotten into tabletop gaming. Ron is also a fourth degree black belt, with a Master's rank in Matsumura Seito Shōrin-ryū, Moo Duk Kwan Tang Soo Do, Universal Tang Soo Do Alliance, and International Tang Soo Do Federation. He also holds ranks in several other styles in his search to be a well-rounded fighter. Ron has been married to Gaming Trend Editor, Laura Burke, for 21 years. They have three dogs - Pazuzu (Irish Terrier), Atë, and Calliope (both Australian Kelpie/Pit Bull mixes).
Related Articles: V-MODA M-100 Crossfade Headphones
Share
Tweet
Share
Submit