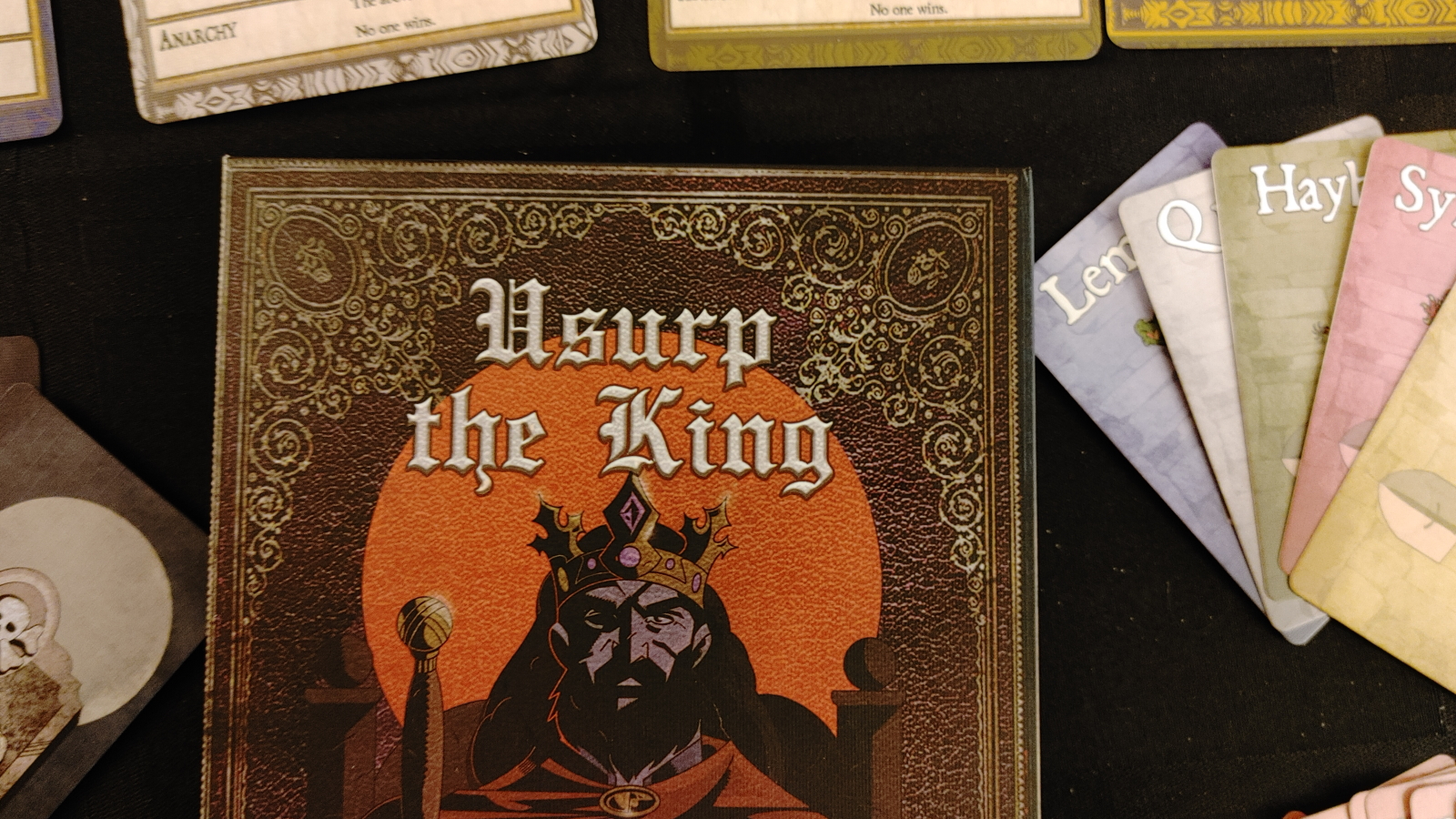 Knives in the night, poison in the banquet, conspiracy and betrayal abound. A revolution is brewing, and you are among the architects that pull the strings.

Usurp the King is a political strategy card game for between 2-5 players, designed by Dan Hundycz. Each player represents a noble family, looking to manipulate events during an uprising. They do this by playing influence cards next to the various members of the royal court. Once each player has played 6 cards, each card is activated in a specific order, moving other cards around, killing members of the court, or pushing them towards loyalty or betrayal.

At the end of the chaos, whoever influences the most powerful surviving member wins. This is where the game’s much touted victory conditions come into play. The rulebook makes these conditions far more complicated than they need to be. Basically, the King wins if he’s alive and not usurped. The usurper wins if he lives and has 3 others to join the rebellion. Then it goes to the king’s heir, the bastard, the members of the court, which have to be alive and loyal, and finally the anarchist, who wins if everyone else doesn’t. 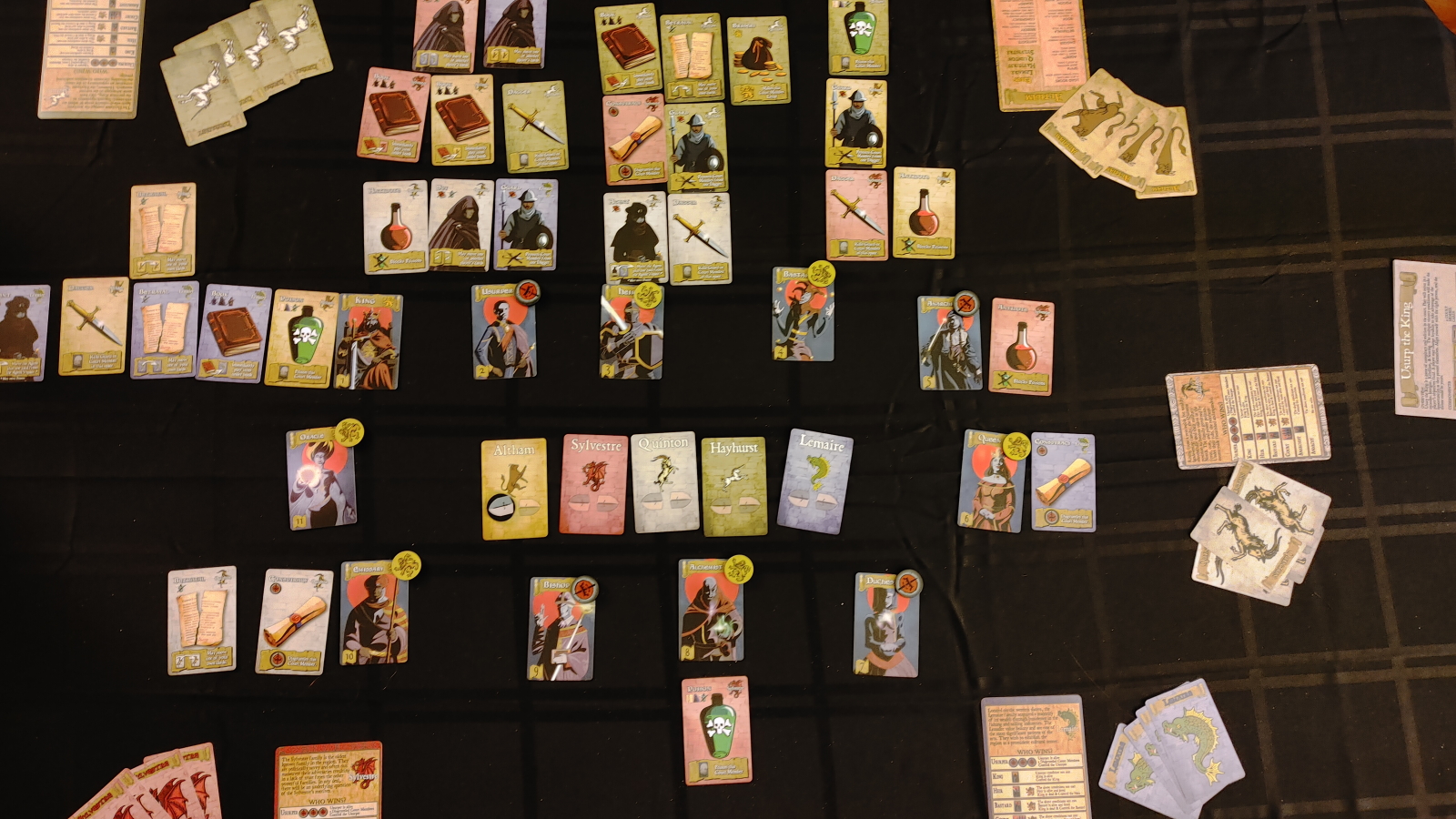 Influence cards are the primary way that players impact the resolution of this one bad night. Each player has access to the same hand of 10 cards. There’s 2 ways to kill members of the court, poison and daggers, and ways to protect from the same. There’s also 3 different ways to move cards, each with their own benefits and limitations, the conspiracy and bribery cards, which turns loyal court members disloyal, and vice versa, and finally, the all powerful book. The book cannot be moved, and hides what is within, which is the primary method of bluffing in this game, since all of the other cards are played face up. The book can only hold objects, not people, so it has a limited use.

Of course, very few of these cards are good for the health of those they affect. Since the number of cards on any given court member determines which house influences them, the means to which you can gain influence with a court member is fairly limited, at least without killing them or making that member disloyal. To complicate things further, a court member whose influence is tied might as well be dead, as there can be no ties in this game. If there is a tie for influence, then that influence doesn’t count for victory conditions.

Since it all happens over the course of a single night, it only takes about 30 minutes to play through a game of Usurp the King. Despite that, a lot of intrigue can happen in that time, especially with a full table of 5 devious participants. 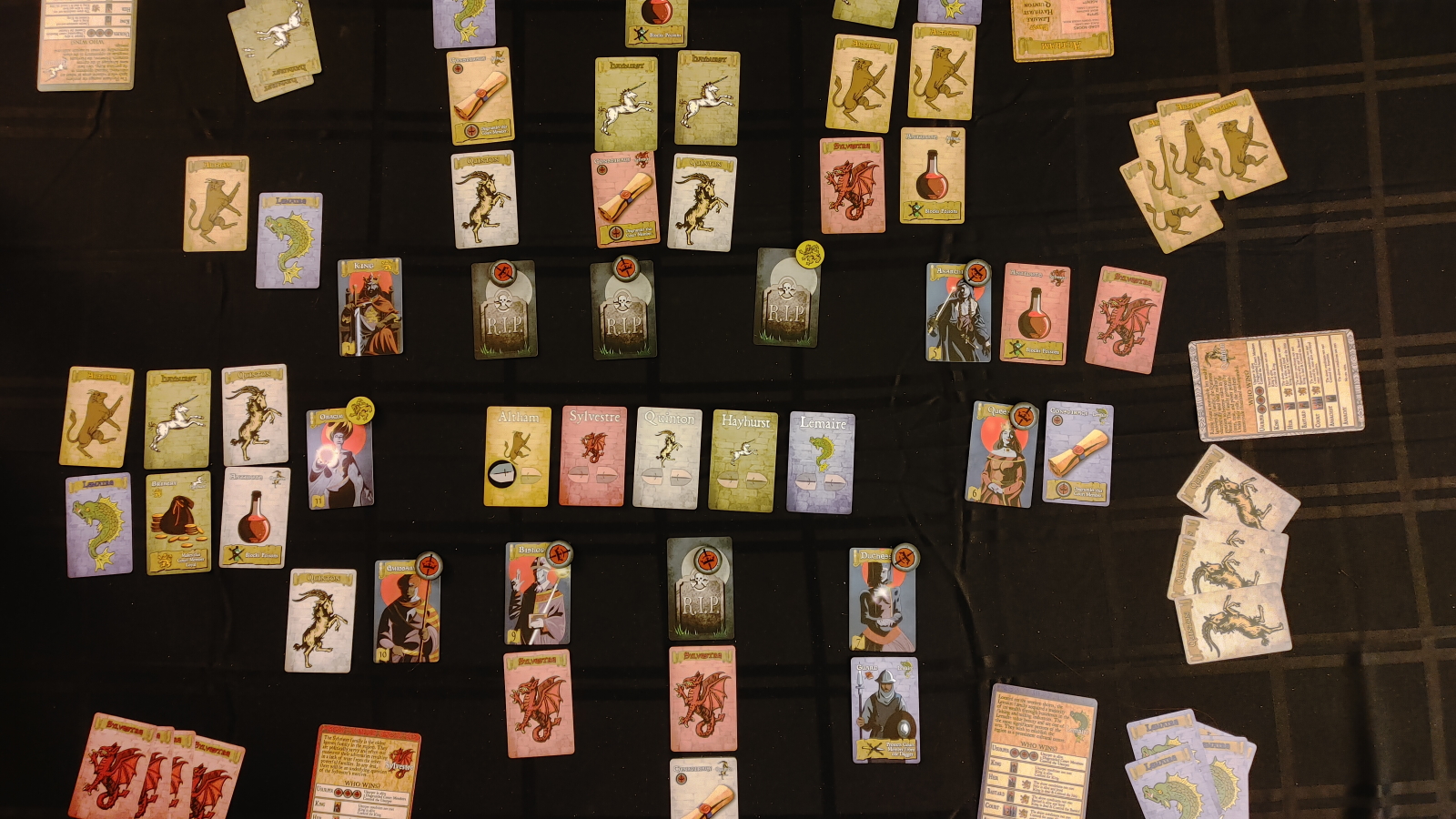 Unfortunately the game suffers from a difficulty in readability, and a 5 player game is a real table-hog, as the higher value court members, such as the king, get loaded up with a ton of cards, while the court members get only a handful as hedged bets. If you’re looking at the pictures in this review, and wondering what the heck you’re looking at, then you recognize just how out of control this game can feel, even from the first moments of play.

Worse, there are limitations to certain cards that seem to constantly get overlooked in the planning phase, leading to players slapping their foreheads when they realize that the plan they made won’t work. Some of these limitations do make sense, such as being unable to hide a guard in a book, but why can’t the agent move the poison bottle? Things like this are almost certainly done for balance reasons, but make the story being told fall flat at times.

However, for certain players, riding that wave of chaos is exactly what they look for. Others, able to pierce the veil of confusion, might find this game a masterwork of political intrigue. From my experiences with the game, I can only feel like it’s an amusing and short game of “things happen, someone wins”. I think most anyone can have a few sessions of enjoyment out of it just watching all the dominos tumble, but I don’t think most people would want to put in the mental effort to really get good at this game.

It’s also not the first Dan Hundycz game I’ve gotten my hands on, and for some reason the quality of the components of this one is comparatively low. Thankfully, the core cards are still high quality, but the tokens are not the same lovely wood of Madoshi, and some of the player aids have a printer error at the bottom, leaving a white bar at the bottom. I also did not get a loyalty token for each court member, being 1 shy. This isn’t a game breaking situation, of course, since the king’s loyalty has no bearing on the game, so in a 5 player game, I play without him having one. 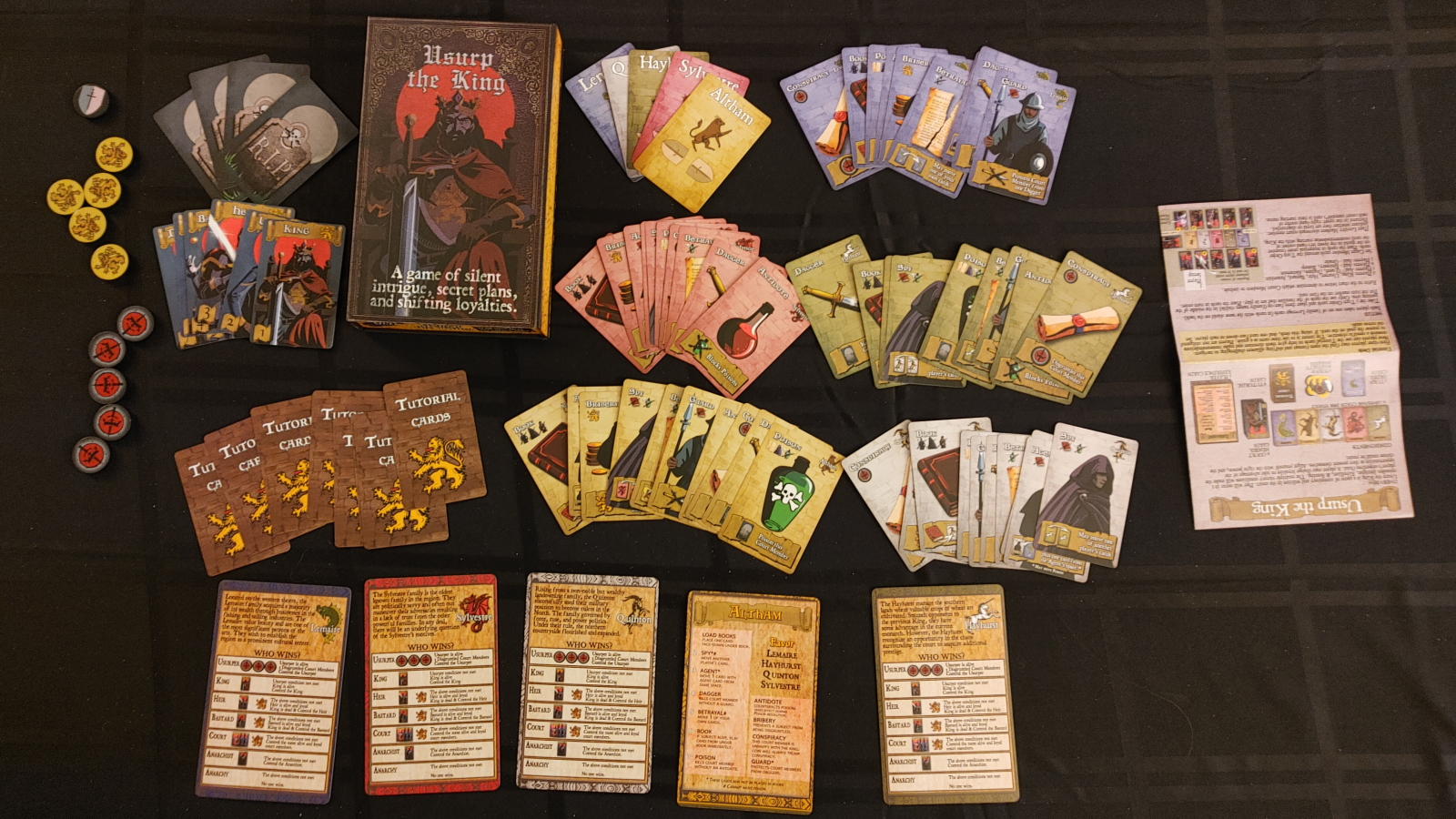 As previously mentioned, the rulebook leaves much to be desired. While the rules themselves are clear in intent, the rulebook is 2 full pages of tiny text that is, if anything, too precise while still using inapplicable language like “Played”. A card in this game is played, but it’s activated much later in the game, so why use that language? In short, the rulebook both lacks precision in language, as well as being difficult to parse through the 2 pages of small text.

Overall, I do enjoy Usurp the King, and its small size and time to play means I can introduce many people to it. However, I don’t think many people will fall in love with it, as it takes a twisted mind to want to really delve into the depth of the weird cards and mechanics available here. I happen to possess one of those (in the attic, if you must know), but I also recognize that very few will find repeated enjoyment of Usurp the King.

Usurp the King is a political intrigue game that suffers from issues with readability and teaching that makes it a bit of a hard sell to a new group of players. The potential that is here is hindered by a sloppy rulebook and a few weird card interactions, but schemers will likely find something to enjoy.