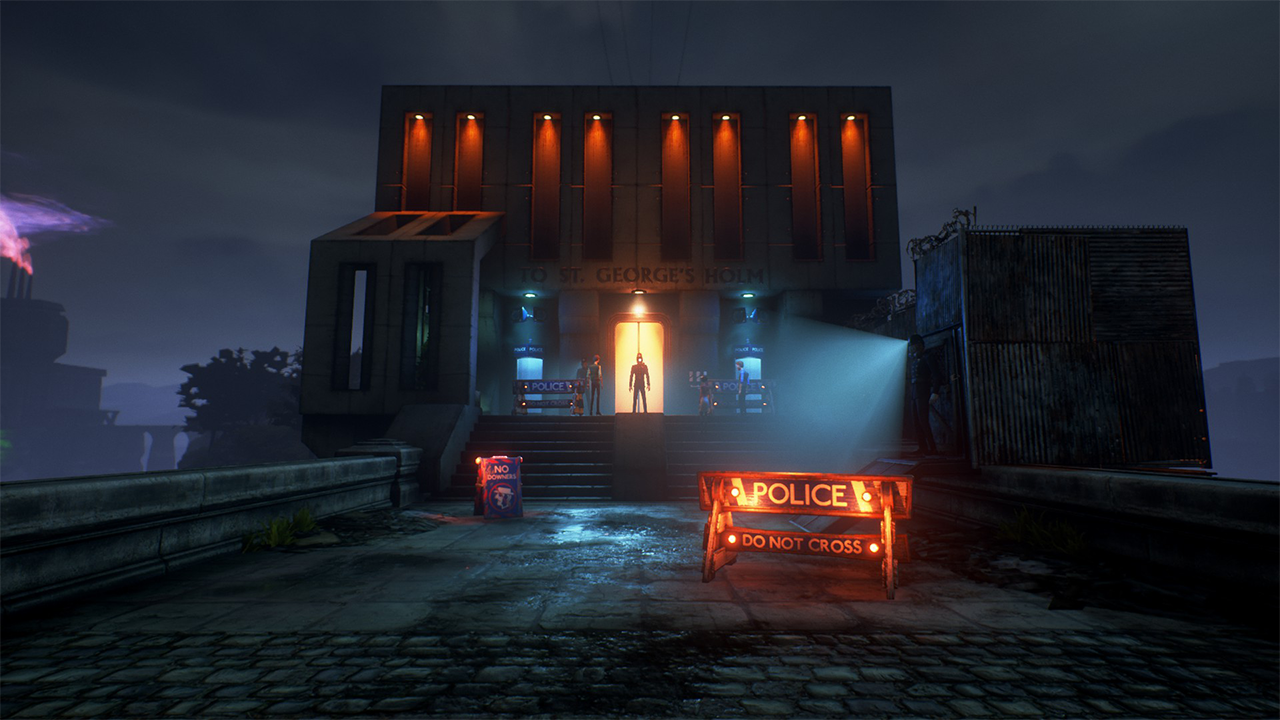 Melding together distinct visuals and head-turning gameplay concepts has been Compulsion Games’ design philosophy since day one. With Contrast, Compulsion proved their ability to create captivating worlds and introduce unique mechanics, something that they would replicate in We Happy Few’s early access days. But past the glitz and glamour of the games’ opening hours—a fatal flaw. While proficient at setting the stage, the games failed to nurture those unique mechanics beyond the games’ opening acts, leading to increasingly disappointing gameplay as the hours went by. Now after several years, We Happy Few is bigger than ever with more room for quality… but also more room for error. Unsurprisingly, the game is grand and filled to the brim with character, but sadly, there’s little room left for all its mechanics to take flight.

Wellington Wells is Compulsion Games’ retrofuturistic rendition of the British 60’s, retrofitted with all the elements of an Orwellian dystopia, alongside a healthy dose of Bradbury, Burgess, and BioShock. You play as three semi-sane characters off their Joy pills, surrounded by uncanny, drugged-out drones that quickly turn into rabid killers at the mere mention of unhappiness. It’s a setting that teases a deep dive into the themes commonly associated with endangering individualism, but spends the majority of its time acting as a zany backdrop to the very personal stories of the three character leads.

We Happy Few’s odd setting and Joy-addicted denizens take a back seat, letting the spotlight fall on the three protagonists: Arty, Sally, and Ollie. If Wellington Wells is the hook that pulls players in, then the relationship between the characters is the heart. The dynamic between characters is something that Compulsion spared no expense to nurture: well-written flashbacks courtesy of mask collectibles, life-like exchanges of dialogue, and notes and journals to read. To a degree, their stories are intertwined, but they don’t share that same bond with the dystopia in which they reside. Some thematic connections, yes, but the personal quests for atonement are catalyzed by events that transpired separately from the rise of Joy. At times, it feels as if Wellington Wells is nothing but a nuisance, doing little more than inconveniencing the protagonists. As the hours went by, this inconvenience became a trend, finding its way into every facet of the experience.

Being an open-world survival game, We Happy Few draws heavily from its predecessors in the genre. Food, drink, sleep, health, stamina, weight—all the staples of the genre make an appearance. To meet your characters’ needs, the game provides you with a seemingly-endless list of items, tools, blueprints, and crafting materials to satisfy very similar requirements. Crafting and upgrading works as it does in most games, but is separated into two categories: chemistry and the more traditional tool crafting. Furthermore, advancing through the skill tree will allow for more powerful tools to be crafted.

While the sheer item diversity is a moment of victory for Compulsion, quantity doesn’t always spell quality. Too many items perform similar functions, and given the surprisingly limited ways in which players can approach scenarios, the majority of the characters’ arsenals is redundant. There are countless ways to stun an enemy, countless ways to distract them, but no reason to experiment with all of them. Debuffs and buffs for failing or meeting your characters’ needs are also fairly tame, killing any sense of urgency often experienced in survival games. The only exception is Ollie’s diabetes, which becomes a careful balancing act between sugar intake, and food and drink.

The melee-focused first-person combat is nothing special, but it serves its purpose well. Feedback on blocks and hits are satisfying, and even with only the standard attack, block, timed parry, and guard break, weapon variety manages to keep combat interesting. From fast thrusts, to heavy and strong, to just downright silly, each weapon type feels unique. But as with most games, certain weapons are far more desirable than others.

Combat is relatively simple, the AI even more so

Where We Happy Few attempts to separate itself from the herd is in its rules of traversal. In urban areas patrolled by police and equally vigilant civilians, any suspicious activity—jumping, sprinting, crouching, stealing—spells disaster for the player. At night, players that dodge curfew will be chased down relentlessly by hordes of policemen. Away from the watchful eye of the government, you’re free to move as you please, but dressing too fancy won’t go over well with poor residents of the Garden District. The Joy system continues this tradition, allowing players to bypass Joy detectors while on the drug, but be careful, too much of the drug will hinder your character.

While interesting in theory, these rules do nothing but extend downtime thanks to their disastrous relationship with the restrictive zone layouts and horribly basic enemy AI. While suffering from Joy withdrawal, you can be easily detected by civilians and police, forcing you into hiding while you wait for the symptoms to subside. The urban areas are completely linear (with one exception), with the odd side area where you can hide in a trash can until the drugged-out police forget what they were doing. On the other hand, the empty outskirts make you wish for unlimited sprint. Both zone types feature braindead AI reskins with awkward pathfinding, akin to a generic zombie game. Every unique survival mechanic implemented carries thematic weight, but no profound effect on gameplay aside from frustration. If being off Joy and sprinting leads to detection in urban areas, then give players alternate routes instead of limiting player agency. This is especially detrimental as players will be spending the majority of their game time in areas that hold the majority of their items and actions hostage.

As if aware that these mechanics were hindering the game, two of the three characters have skills in their respective skill trees to completely eliminate them, allowing players to sprint and dodge curfew as they please. The third is a tank that encourages players to throw whatever strategy there was out the window and wail on every policeman they see instead. Arty, whose story comprises Act I of the game, is an all-rounder capable of any playstyle. Sally’s skillset demands stealth and chemistry while penalizing aggressive playstyles, and Ollie is a beefy, melee-oriented character who can’t touch chemistry and makes it very hard to entertain stealthy playstyles. It’s odd that Arty, being the first character, is capable of everything while the other two are located at the extremes. After 15+ hours with Arty developing a preferential playstyle, you’re restricted for the remaining two-thirds of the game.

A street not unlike the dozens of others

Needless to say, the open world pales in comparison to the much more exciting, enigmatic main quests. The curated content is by far the highlight of the game, taking players to unique environments and offering them interesting objectives to complete. We Happy Few has an open world for the sake of having an open world. Access to 98% of houses is blocked off, side content is uninteresting, and poorly designed areas prevent players from exploring the intricacies of the game’s mechanics.

We Happy Few is an ambitious open-world survival game that does not benefit from being one. Tedious exploration courtesy of poorly-designed environments and underdeveloped survival mechanics detract from an otherwise strong main adventure. Charming presentation, colorful writing, and powerful environmental storytelling are highlights that are unfortunately eclipsed by a shallow open world.

A self-deprecating, overly sarcastic pair of glasses that occasionally possesses a human host in order to partake in the delightful process of playing video games, then immediately complaining about them. When he is not playing games (a rare occurrence), he can be found either writing about things that no one cares about, or haunting the quiet streets of his Canadian suburb.
Related Articles: Indies, We Happy Few
Share
Tweet
Share
Submit