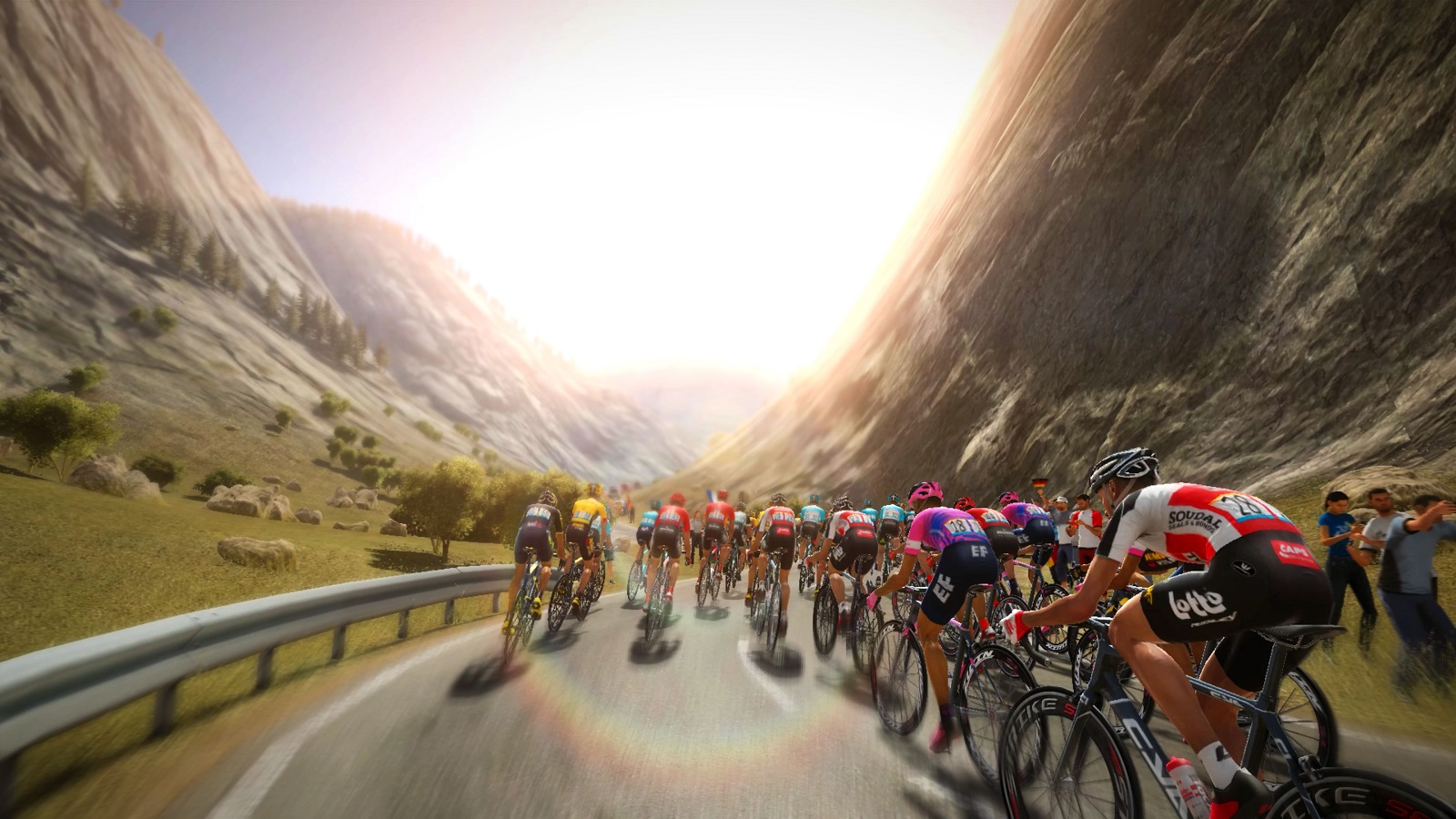 I don’t follow many sports, certainly not to any high degree, preferring to take part in the activities when possible rather than watch. As such I can’t really give an opinion on Tour De France 2020 as a fan of the event. It’s something I have often thought I would tune into and follow but ultimately never have, so TDF’20 could very well be a perfect representation of the event for all I know. However I do have another perspective; I am a Bicycle Mechanic as my “in real life” job. I work on hundreds of bikes every year, sometimes it’s just a simple kids bike for a puncture repair, sometimes a very high spec mountain or road bike for a full service or perhaps a custom wheel build – if it qualifies as a bicycle then I work on it. So it probably isn’t surprising that I myself am a keen cyclist, covering thousands of miles each year in all weather conditions and in a particularly mountainous region for most of it.

Much like I have never really watched the actual sporting event neither have I played any of the previous Tour De France games. Going into this review I had been expecting, rather hoping, I would find a polished cycling simulator challenging me to win the famous event while taking me on a fabulous tour of the beautiful French scenery I may never actually have the opportunity to cycle through myself (certainly not without contending with traffic and other cycling associated hazards). Well… I found some of that. Sort of. You see in TDF’20, you’re not really focusing on one particular rider and the game puts a lot of emphasis on managing the team of riders to which you belong. Which I’m sure is accurate to how things work in the real event, I myself have been out on group rides and there’s a degree of communication in play under even that more casual setting. 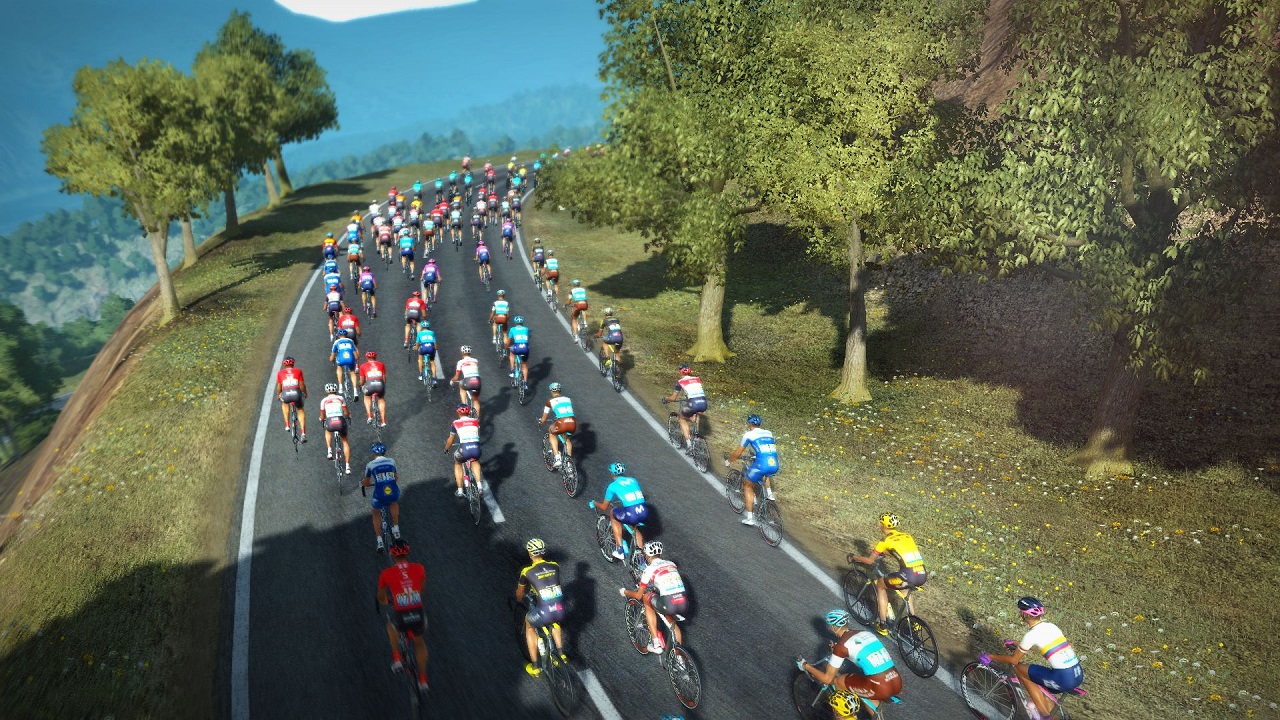 The thing is, in game I found myself constantly swapping from this rider to that, trying to keep everyone in the race and getting other team members to support others. The mechanic does sort of keep you in the action; you’re not always way out in front alone or just challenging one or two other riders. Instead, when one rider is in a relatively strong position you can swap out to another team member who’s tied up in the peloton and fighting for position. The problem is… I kind of just want to focus on one specific rider and keep that one athlete going strong, managing their stamina and rhythm throughout the particular stage of the race, of which all 21 official stages are accounted for in TDF’20 and also the Liège-Bastogne-Liège race. While you could technically just stick with the one rider from stage start to finish, the odds are that the rest of your team are going to fall behind or struggle without some player intervention so you end up obligated to split your attention.

As for actual riding mechanics, you pedal with the right trigger and attack (Sprinting) with A button and there’s a radial dial to display just how much effort you’re putting into either action and ever depleting energy gauges in relation to have much stamina you have for riding and how much for attacking. Run out of attacking energy and you won’t be able to make that all important dash just when you need it whereas running out of stamina will result in Blowing Up. I don’t literally mean that your cyclist will explode, that’d be kind of gruesome if not somewhat hilarious, but it essentially means you’ll run out of steam and drop out of the race. You carry energy gels that can be consumed during the race to replenish these bars and you get new gels once per stage. In addition you can set your rider to a desired pace and move into an aerodynamic posture which is effective on descents, or set your rider to follow another and match pace with them and you can tuck in behind others to get out of the wind and reduce drag, saving energy in return. 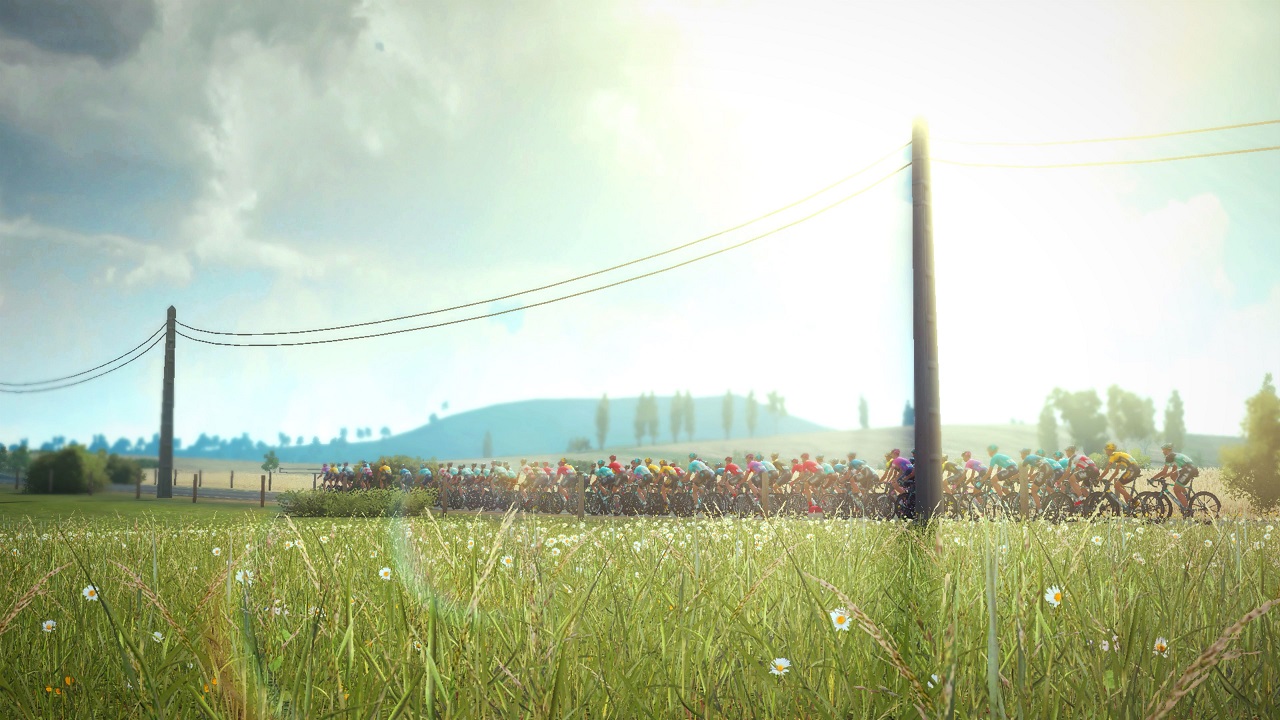 This all works well enough, however I would have liked more in depth control. Why can’t I see my cadence as a number? Why can’t I have a clear arrow showing wind direction and speed? Why can’t I ride in the drops whenever I want to tuck in from the wind? I would have liked to have been able to manually select gears. Why is braking so binary? You “can” modulate the braking power but there’s a very fine line between having no stopping power at all or stopping on a dime. Actually that point about braking is pretty annoying when trying to complete one of TDF’20’s downhill race modes, a game mode that is admittedly kind of fun. Basically you attack famous descents from various Tour De France stages, and trying to beat times and belting it down these mountainous roads is mostly a good time but… when I only want to scrub a little bit of speed so I can make it through a tight bend as fast as possible, only to end up stopping like I hit a brick wall, well that gets a bit infuriating.

Also, under-steering through a bend and ploughing into bystanders as a result simply stops you in your tracks. The bystanders don’t even flinch, you don’t get flung over the handlebars or even scrape a knee. I get that the developers might not have wanted to depict pedestrian-meets-bicycle carnage but it does feel pretty jarring with I’ve just hurtled into a crowd at 30mph and nobody even jumps out of the way. Speaking of the crowd, that reminds me, while playing on my Xbox One X, I did check a couple of times to make sure I hadn’t actually downloaded something onto my old Xbox 360 and started running that. All the rider models look kind of uncanny valley, very expressionless and all slightly odd proportions. 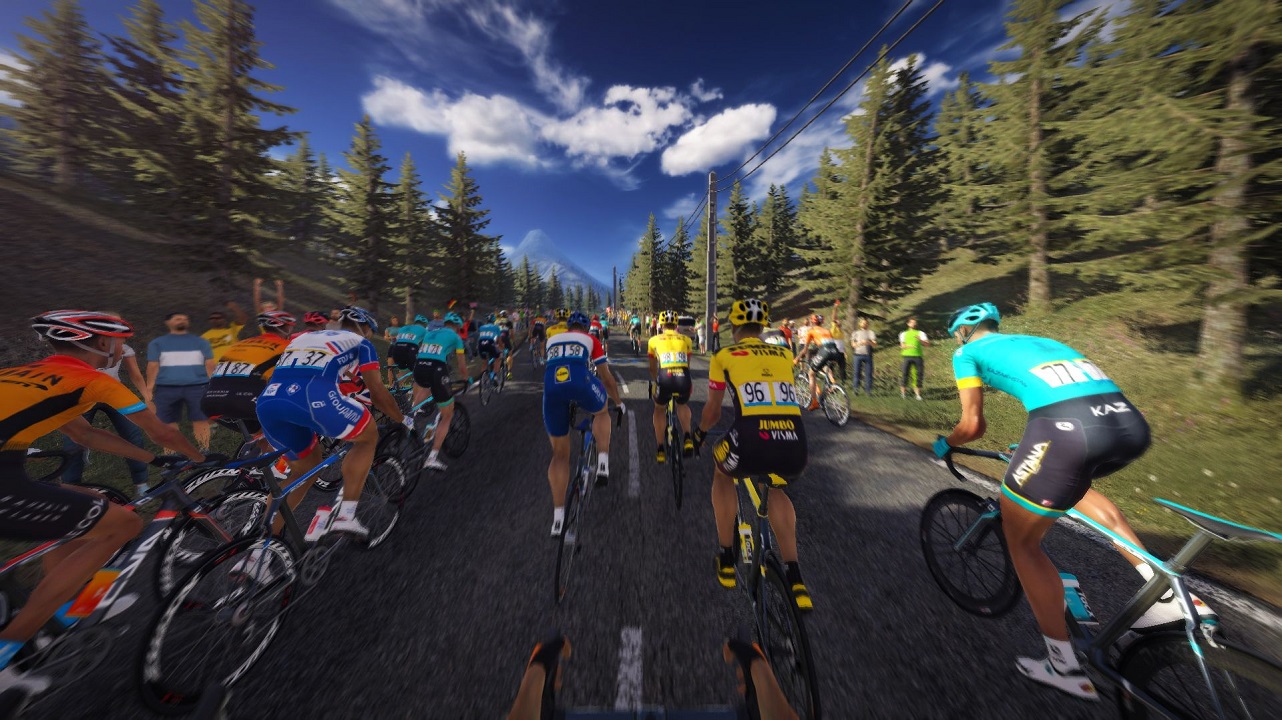 The spectators are a bit more life-like but still look rather dated. And my dreams of cycling through a picturesque virtual French landscape were also dashed. While the presentation here is functional and gets the job done, I wasn’t all that inclined to pan the camera around and take it all in. The first person camera is pretty good though; apparently that’s a new feature for the 2020 installment, but it does give a good sense of speed and puts you in the saddle more so than the 3rd person cameras. It’s pretty good on those downhill challenges we spoke about earlier.

And another thing! Why doesn’t anyone seem to suffer mechanical problems? I never saw another cyclist crash into another, never saw anyone fall or suffer a flat or any other number of potential mechanical issues when riding over a long distance. That would have just added that extra little degree of realism and tension but such a thing is sadly missing from TDF’20. 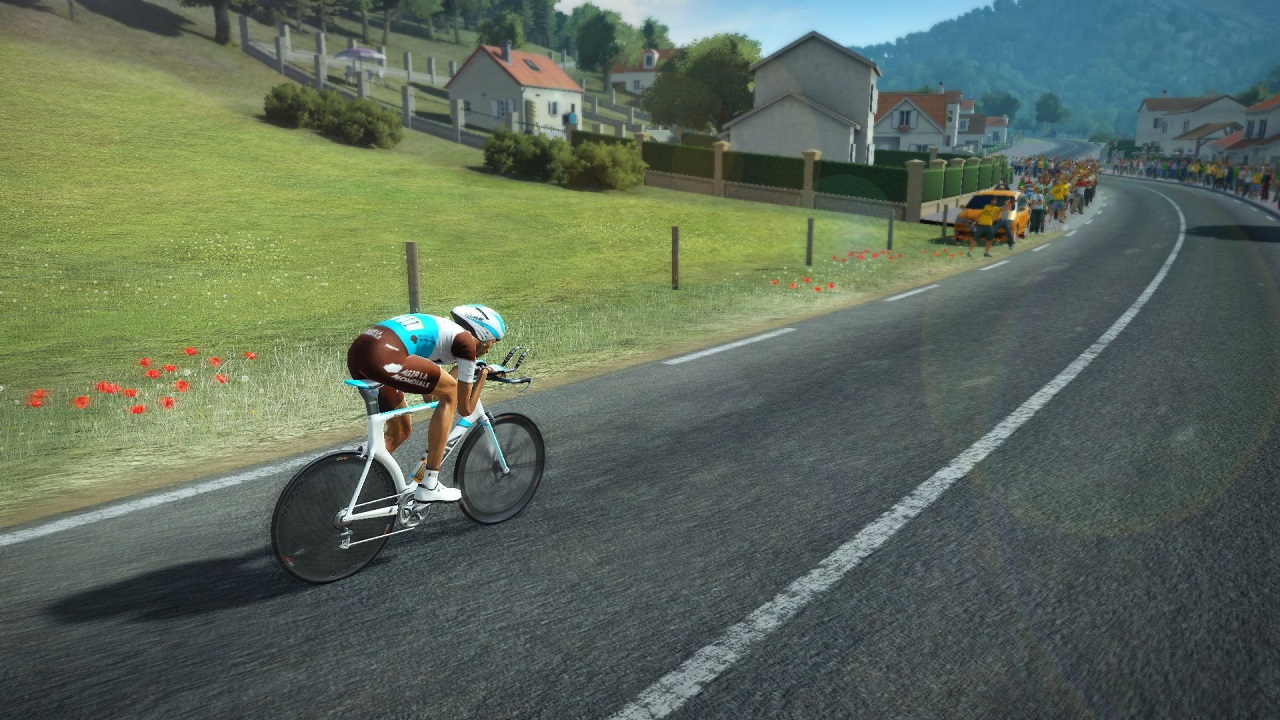 Tour De France 2020 is a functional game and did manage to engage me on some occasions but I was left wanting for a more fleshed out experience of actually riding in a TDF event and could have really done without so much faffing with multiple team members. If you like the management side, this might be for you, but if you want a more in depth cycling experience… No yellow jersey for this one.

Grumpy gamer from UK with a keen interest in retro gaming and modding. Can also be found cycling up and down mountains, walking dogs, watching Sci-Fi and reading all sorts of books.
Related Articles: Tour De France 2020
Share
Tweet
Share
Submit