I consider Enter the Gungeon to be the pinnacle of its genre. It’s precise, polished, and as close to perfection as the rogue-like genre can get. I reviewed the game last year on Switch complete with all its free expansions and updates, so naturally I jumped at the chance to review the sequel. I have played Exit the Gungeon once before on Apple Arcade, though I didn’t get through much of it there mostly due to the touch controls. I figured I wouldn’t enjoy the intricate and pixel-perfect bullet hell gameplay with a controller as imprecise as a touch screen. Oh, how wrong I was.

Exit the Gungeon takes place immediately after the first game, as all the gungeoneers have killed the past at least once and that has taken its toll on the gungeon. Now, instead of descending the complex strata of the dungeon, you’re ascending an express elevator to the exit as everything crumbles around you. Instead of a top-down view, you’ll play from a side-on perspective as you dodge-roll left, right, up, and down. And you’ll be doing a lot of dodging; the elevator’s pretty cramped and the gundead keep putting their bullets everywhere. When you’re not dodging, you’ll be spreading shots around the small shaft to try and increase your new combo meter. See, in Exit the Gungeon you only have the one gun that changes into other guns every few seconds. While the gun your previous gun will guncome is random, the higher your combo the supposedly better guns you’ll get next. While the gungeon this time isn’t randomized, each gungeoneer has their own, unique set of elevators that occasionally cross over into each other; for example, most characters will start in the same area. Just like its predecessor, there’s a ton to unlock like new gungeoneers, weapons, shopkeepers, minigames, and hats. 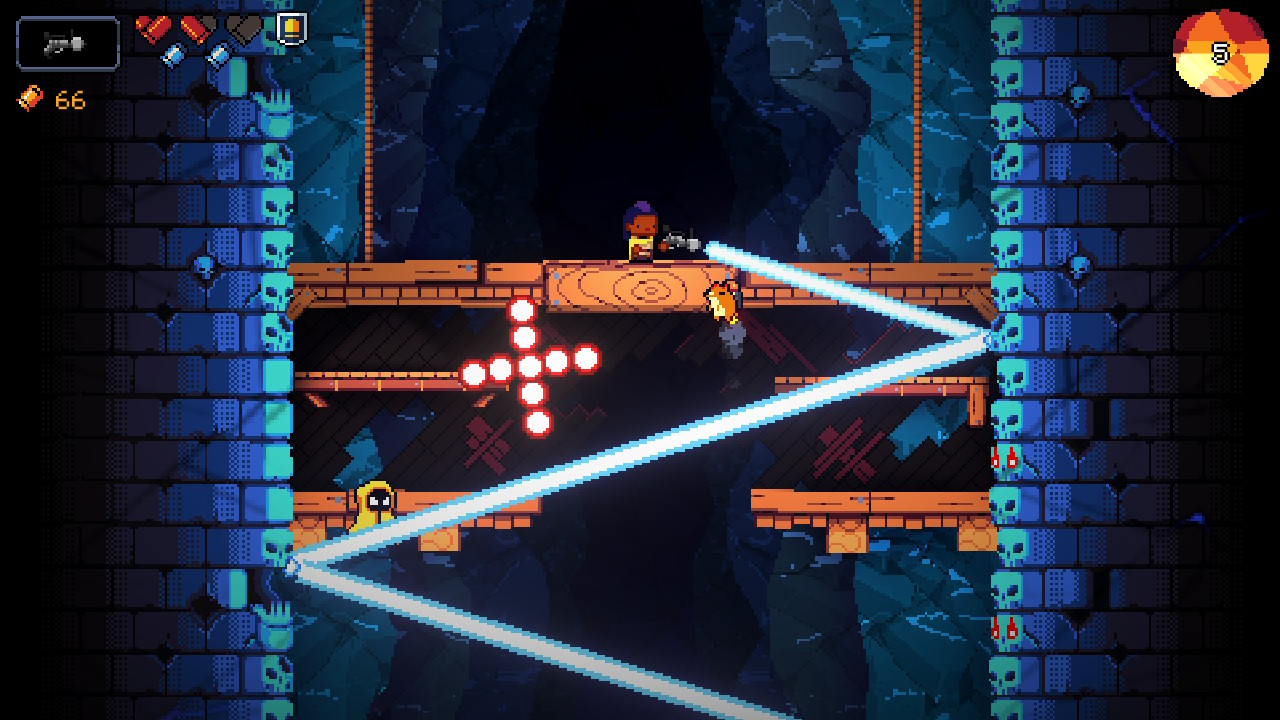 On my first few attempts at exiting the gungeon, I was excited at the prospect of mastering these new mechanics like the randomized guns, combos, new dodge-rolls, and abilities for each gungeoneer. But this excitement quickly faded around attempt 10. The randomized guns make the game rely a lot more on luck than skill; I was still getting useless guns even with high combos. Charge weapons in particular become very difficult to defeat enemies with since there’s no aiming reticule to tell where you’re shooting and the need to constantly dodge will interrupt or delay the charging process. This leads to some more real life problems: since you’ll want to always be shooting when you’re not dodging, you’ll be holding down ZR at all times to either fire or reload. Trust me when I say that after an extended play session your index finger is going to be sore. An auto-fire option while holding the right stick would be appreciated.

While Enter the Gungeon had me weaving in between bullets and occasionally dodging through them, Exit the Gungeon had me dodging almost constantly. On later floors, there are so many bullets on screen, you’ll be tempted to use a screen clearing blank just to get a grip on what’s going on. To make visibility even worse, some enemy’s color schemes will blend into the background making them essentially invisible, bosses especially suffer from this. To put a cherry on top, enemy spawns are indicated by a thin crosshair that’s a similar shade of red to the bullets covering the screen. You can probably guess where this is going. In almost every single run, an enemy appeared right on top of me that I could barely see, resulting in either damage or death. There are so many colors on screen that everything just kind of blurs, which does not help the precise movement the game still asks of you. As a spin-off/sequel to a game that had very deliberate color choice, it’s surprising that the visuals here, while slightly upgraded, feel so haphazard. 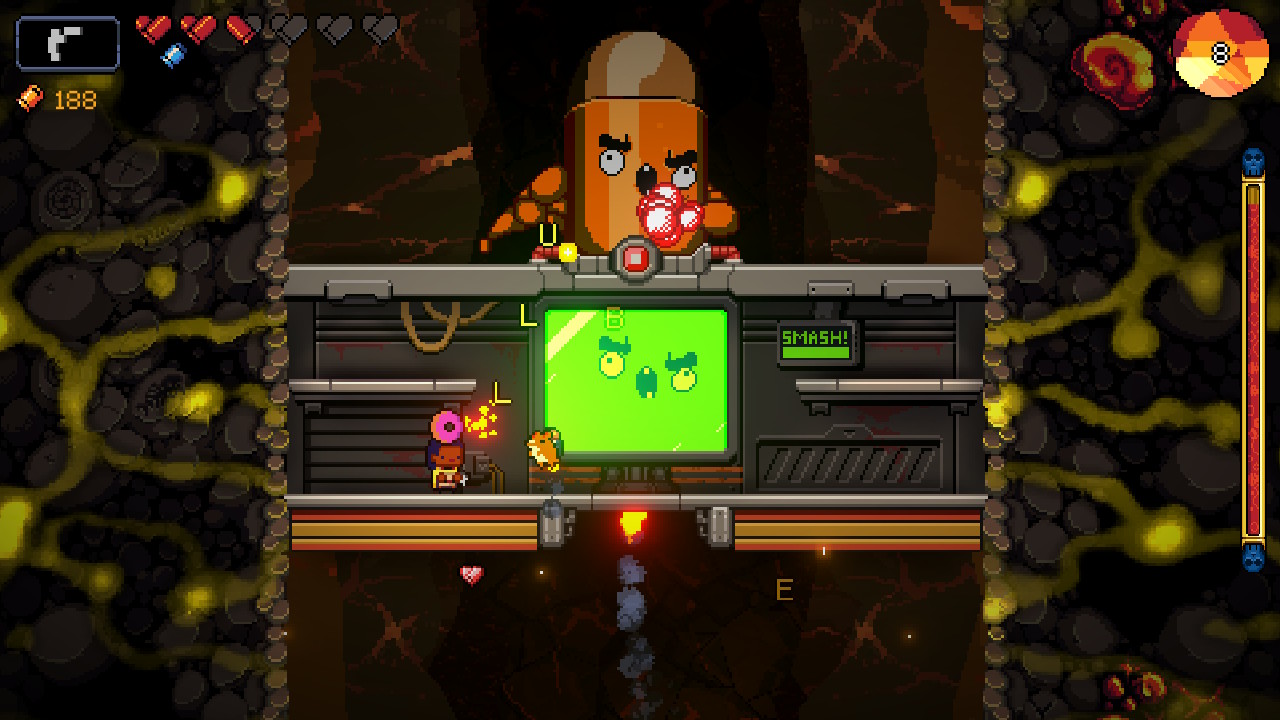 One thing Exit does retain from Enter is the quality of the writing. While you unfortunately won’t find much lore on items, enemies, or areas, you’ll encounter plenty of jokes that will all get at least a chuckle. If you are a fellow connoisseur of puns, you’ll find plenty of them to love/hate here. There are a bunch of fun text effects to accent each joke as well, like the word ascend will literally float upwards. One joke doesn’t land in the tutorial due to the lack of achievements on the Switch, but that’s the only one that falls flat in a sea of good jokes.

While I am being very harsh here, I didn’t hate my time with Exit the Gungeon. I actually enjoyed it a bit. It’s just that the bar the first game set is so high, it had no chance of living up to expectations. If this game receives the amount of updates, polish, and love the original did I could see this becoming a very competent experience. As it stands though, I would stay in the gungeon just a bit longer.

Those expecting the quality and polish of its predecessor will be disappointed with Exit the Gungeon. It’s too visually clustered and the new mechanics can be more frustrating than fun. Still, for a short burst of rogue-like goodness, you could do worse.

David is the kind of person to wear his heart on his sleeve. He can find positives in anything, like this is a person who loved Star Fox Zero to death. You’ll see him playing all kinds of games: AAAs, Indies, game jam games, games of all genres, and writing about them! Here. On this website. When not writing or playing games, you can find David making music, games, or enjoying a good book. David’s favorite games include NieR: Automata, Mother 3, and Gravity Rush.
Related Articles: Exit the Gungeon, Indies
Share
Tweet
Share
Submit