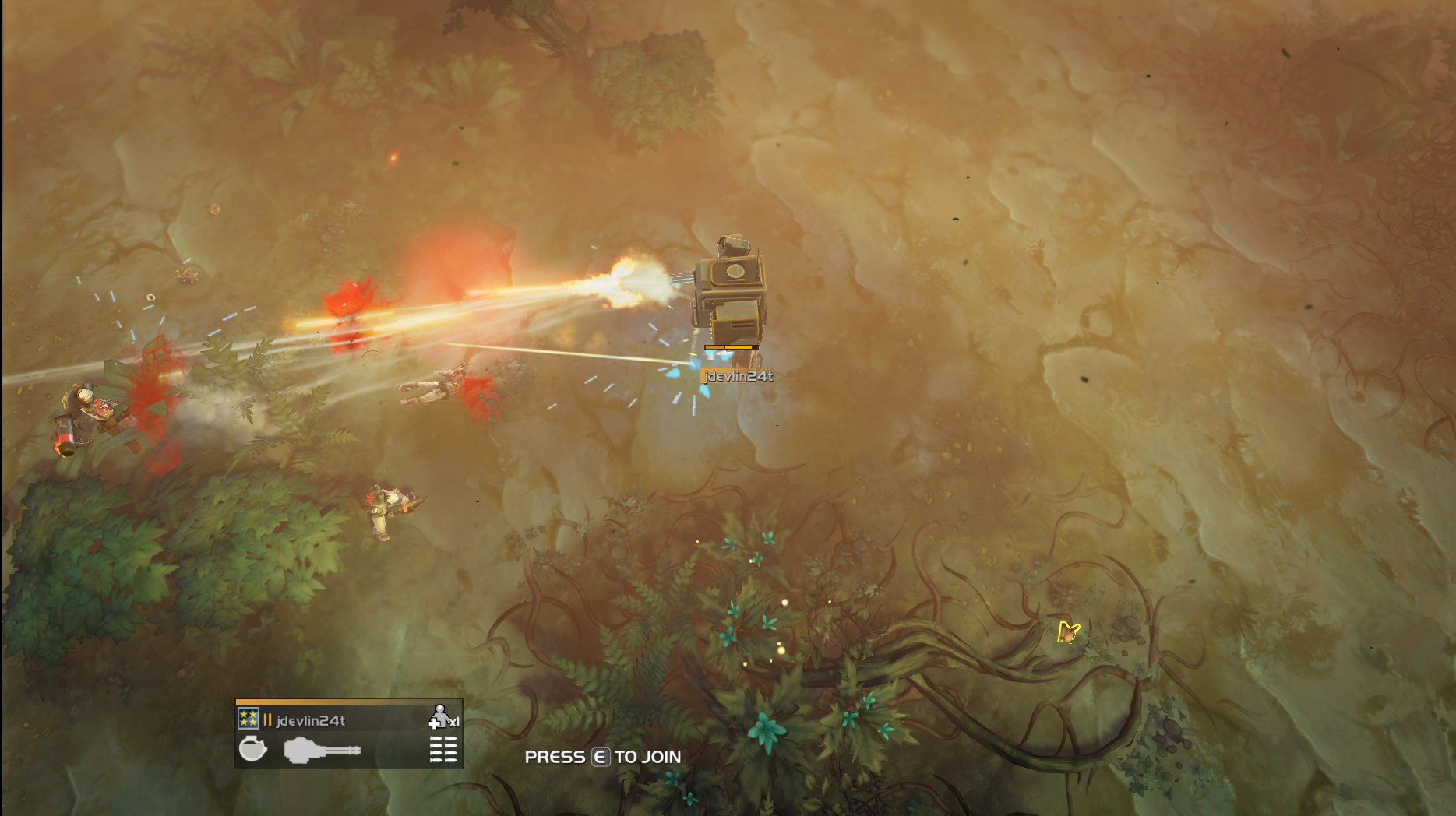 Helldivers doesn’t quite capture the intensity and brutality of the many galactic battles we see in films like Starship Troopers or Aliens, but it makes a decent effort. From Arrowhead Game Studios (the makers of Magicka) comes a bread-and-butter top-down shooter that has a few kinks and twists thrown in to freshen up the experience in this oversaturated genre. In Magicka, the gameplay hook is the use of unique, and often, complex keypad combinations to combine elemental abilities to create various magical attacks. In Helldivers, that same keypad system is used, but to a lesser degree. In Helldivers, these abilities come in the form of stratagems–space-deployed pods of weapons, gadgets or vehicles that drop in to assist your Helldiver in combat.

From health/repair kits to rocket launchers to minigun-wielding mechs, there’s a stratagem in Helldivers for every combat scenario. Helldivers can be played single player or up to four-player co-op, and just like every co-op game before it, the experience is much better when you have a team of Helldivers tearing up alien scum together. For those who prefer to fight the good fight on their own, you may be a bit disappointed.

Helldivers is a difficult game. Once you get into the “medium” tier, things really begin to ramp up. Character movement is slow, and it’s even slower when you have to aim. It’s easy, especially in the later levels, to be swarmed by enemies. And unless you’re a keypad savant, dropping to one knee to radio in stratagem support while being attacked by hordes is a bit of a hassle. Ammo is sparse, and the reload animation is excruciatingly slow, leaving you utterly defenseless. Moving through various types of terrain like snow or marshlands slows your character down even more. Escaping from fast-moving cyborg dogs, while in the snow, and trying to reload, is next to impossible. You’ll find yourself downed and bleeding…a lot. When you have friends to revive you, or to aggro enemies while you call in support, it makes the experience bearable. But when you don’t have another player to share the load, it can be incredibly frustrating.

Multiplayer integration isn’t limited to just you and your co-op partners. There is a meta-campaign that includes the entirety of the Helldiver’s online community. Three different factions–the cyborgs, bugs and the Illuminate–occupy multiple planets and sectors around Super Earth. Players across the online community must fight these aliens threatening their homeworld. Each sector has a series of planets organized by difficulty. On each planet is a set of missions that must be completed to liberate that planet and gain influence toward the overall war effort. The higher the difficulty, the more influence awarded.

Each planet comes with experience and a reward–a new stratagem that players gain upon completion. The process of playing to gain new stratagems is appealing at first, but loses luster as you progress. It just wasn’t enticing enough to keep me engaged. And not once did I feel like I was making any difference toward the Galactic Campaign. This may change as your level progresses, but even then the impact a single Helldiver makes within the broader community is minimal except for the elite few. The top players on the leaderboard put in dozens of hours, and over a hundred completed planets, just within a single campaign.

Arrowhead goes back to its roots with the PC port. The controls–though they felt natural on a gamepad–definitely feel designed for mouse and keyboard. This version comes with the “Masters of the Galaxy,” “Turning Up the Heat” and Democracy Strikes Back” expansions, so you get the entire Helldivers experience to date. If you’re a fan of hardcore top-down shooters and you enjoy coordinating your alien hunting parties with friends, then Helldivers is the game for you. If you prefer to Helldive alone, the experience is far less appealing.

Arrowhead Games struck a tremendous chord with Magicka, finding a way to turn always-on teammate damage into a selling point rather than a pain in the ass. In Helldivers, that emphasis on the fundamental danger of your own teammates remains, but has been honed considerably to provide a better multiplayer experience. Where a substantial portion of Magicka’s charm came from the uniquely scandinavian humor (and accents!) the game provided, Helldivers’ dystopian world exists largely as a backdrop to the gameplay itself. Bullets fly in all directions as teammates struggle to survive against encounters that often feel fine-tuned to induce just the right amount of challenge, frustration and panic in cooperating players. Death is common, as is out and out mission failure, but the way a challenging level plays out feels strangely satisfying no matter what the result is. Any game can make it possible to easily kill your allies or snatch defeat from the jaws of victory, but it takes a very skilled developer to turn these things into an asset.

The big worry with a multiplayer-centric game is whether there’s enough of a community to guarantee a prolonged experience, and enough content for the same. On the front, Helldivers succeeds again. This has been a much awaited game, and the near-2000 reviews since its December 7th launch shows as much – it’s going to be easy to find random strangers to cooperate with, for those of you who don’t plan on bringing your own friends into the game with you. The content is substantial as well, owing partly to the fact that Helldivers has had a long console life until now, which means it reaches the PC with a plethora of added content, including pay-DLC. Now, even with both of these things in place, there’s always the possibility that a player will just get bored with the experience and need a breather for a while – but having so many unlocks, enemies, and things-to-explode is all anyone can reasonably ask for once the fundamental game has turned out to be solid, which Helldivers is.

With all this in mind, it’s worth noting: Helldivers is very much a multiplayer experience, whether you’re cooperating with friends or rolling the dice on meeting up with strangers. If you’re looking for a substantial singleplayer campaign or solo-experience, look elsewhere because this game doesn’t have it. On the other hand, Helldivers never really suggests otherwise – much like Payday 2 or the Call of Duty franchise, this is a game whose main selling point is the online multiplayer aspect. On that front, it delivers. Content is abundant, especially compared to its original console launch, but comes with a caveat: the Helldivers DLC library is filled to the bring with lots of little purchasable unlocks, all of which can add up to a substantial additional purchase. For patient gamers who are willing to wait for bundle discounts, this isn’t much of a big deal. For others who are picky about this kind of investment-creep in their games, well – be aware of what’s going on before you dive in here.

Ultimately, Helldivers is a fun, extremely well-polished game which is going to appeal to a fairly specific subset of gamers. This isn’t a title which is going to convince you of the entertainment benefits of accidentally getting gibbed by your poor-aiming, highly-strung friend. It’s also likely not going to sell you on the high-pressure cooperative shooter genre, which tends to offer a very specific kind of adrenaline rush gaming experience. But if you find yourself playing games like Magicka and craving more of the same in a new, flashy setting - then Helldivers is certainly for you.

Victor Grunn has been a gamer since the days of single-button joysticks and the Atari 800XL. When not lamenting the loss of the Ultima series or setting people on fire in Team Fortress 2, he's an aspiring indie game developer and freelance writer.
Related Articles: Helldivers
Share
Tweet
Share
Submit