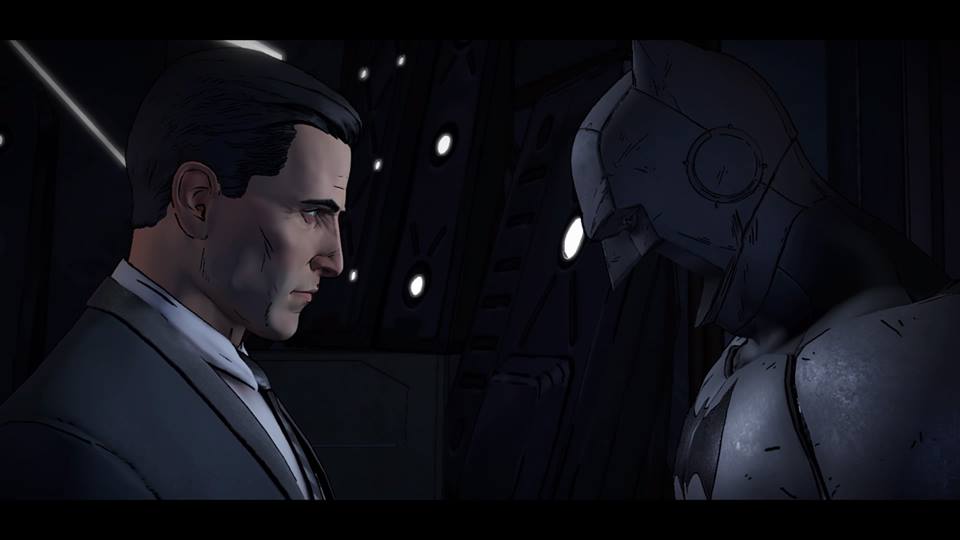 At the end of the first season of Batman, I’m feeling conflicted about Telltale’s take on the superhero and the city of Gotham. On one hand, the series absolutely lives up to its promise of  delivering a new kind of Batman story, one in which I felt like I had a tangible hand in shaping the character of Bruce Wayne. On the other, it  feels like a poster child of  the best and worst qualities of Telltale’s work, one held back by the studio’s unreliable engine, even when it’s making fantastic strides in crafting stories that don’t feel constrained to the source material it has to work with.

While it became slightly less prevalent as the series went on, I did feel like I wasn’t held to a specific idea of who Batman or Bruce Wayne was in the decisions I was allowed to make. This has been an issue Telltale has suffered from when working with established characters like Michonne and Bigby Wolf, who, no matter what choices I made, were perceived in a certain light because that’s who they’ve always been written to be. Batman, and by extension Bruce Wayne, felt like someone I was free to color in to fit my idea of the character. Much of that freedom comes from Telltale’s more methodical, personal take on a Batman story compared to other interpretations like Christopher Nolan’s Batman films and Rocksteady’s Arkham games.

I fought Two-Face not physically as Batman, but with my words as Bruce, his old friend. I explored the Arkham Asylum not as Batman, ready to take on a ton of committed patients in a fist fight, but as Bruce Wayne, without my armor and gadgets to rely on, forced to partner up with the Joker in order to escape.

Telltale’s spotlight on the man behind the mask is the lifeblood of Batman that lets Telltale tell not only a story all its own, but one I found more compelling than the usual rote conflicts between Batman and Joker, the go-to story to tell in this world, even if the end of the season seems to hint that route is not out of the question. It made me feel a more personal connection with Bruce than any Batman story prior, and Telltale gave me enough wiggle room to feel like he was my character, not one I was trapped within the confines of.

Throughout the series I was given the chance to pick whether to handle situations as Bruce or Batman, and nearly every time I went with the former because that was when Telltale’s strengths shined the brightest, while sequences as Batman often put the studio’s weaknesses under a microscope. While the studio’s take on Batman has some of the most entertaining and well-choreographed action sequences it’s ever produced, it was here  the series’ was subject to perhaps the most the most damning technical problems Telltale has had in several years.

Despite utilizing a new engine, Batman ran worse for me than any other game Telltale’s released on PlayStation 4. Throughout the entire season, I dealt with chugging framerate, character models that didn’t properly render into the world (to horrifying and somewhat humorous results, seen above), and multiple crashes to the console’s home screen. These happened not only during action sequences where my reaction time was imperative, but  in simple segments where characters were having a conversation in a mostly static environment. These issues rival, and in some cases exceed, those of games the studio released on older hardware several years ago. I can only imagine what players trying to play it on PlayStation 3 or Xbox 360 must be experiencing if this is how the game runs on a modern console.

That’s why I feel so conflicted with praising Batman as a comeback for Telltale, despite it overcoming my main criticisms of recent offerings like The Walking Dead: Michonne and Minecraft: Story Mode. It delivers a game with tangible consequence and player input, full of memorable choices and compelling drama, but its technical troubles make it feel like the studio is dragging its heels in the dirt as it moves toward change for the better. Bruce Wayne and the conflicts players have to deal with in his shoes have earned their place as standouts in Telltale’s portfolio, but even they only barely overshadow some of the shoddiest technical work Telltale has delivered in recent years.