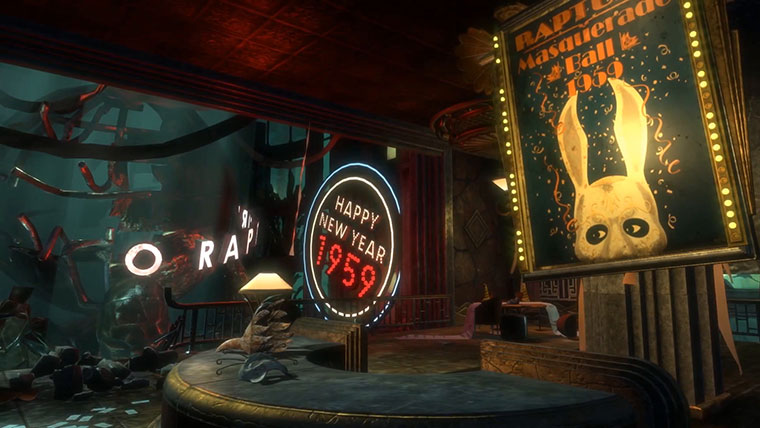 There’s always a lighthouse. Also, there’s always a remaster. The Bioshock series contains some of the most transformative titles in gaming, and possibly the most important games in the past decade, so a remaster of these legendary titles seems inevitable. We already know that the Bioshock series is great, so for this review, I’ll be focusing mostly on what’s new, and whether this package is worth the asking price.

The Bioshock Collection contains Bioshock, Bioshock 2, and Bioshock Infinite, and all of the single-player DLC for each of those titles. Each of the titles has been given a minor facelift, and now runs at 60 frames per second. Bioshock 2 definitely gets the short end of the stick here, as the multiplayer mode was the star of the show in that game, and it’s sadly nowhere to be found. Aside from that omission though, The Bioshock Collection runs well, and is pretty much what you’d expect from a remaster.

The Bioshock Collection includes some behind the scenes content, including the Bioshock Documentary Reels, a series of interviews with Creative Director, Ken Levine, and Lead Artist, Shawn Robertson, and the “Bioshock Museum.” The Bioshock Museum lets you enter a virtual exhibit that shows off legacy pieces of artwork, character models, and abandoned ideas that were worked on during development of Bioshock. There isn’t a lot of content in the museum, but for hardcore fans of the series, it’s really cool to be able to get a close look at what Bioshock could have been.

The Bioshock documentary reels, on the other hand, contain a significant amount of content, and are well-worth the effort of collecting them. Each reel can be found throughout the campaign, and unlocks a 15-20 minute interview segment, each focusing on a specific topic. Frankly, these interviews are hilarious — mostly because 90% of the interviews focus squarely on Ken Levine, and Shawn Robertson explaining that the Bioshock creation process was extremely low-budget, incredibly unstable, and how, by all accounts, Bioshock should not have turned out as well as it did. It’s seriously inspiring.

The only major issue with The Bioshock Collection (aside from Bioshock 2 not having multiplayer), is that it sometimes doesn’t perform as well as one would hope, technically speaking. Although each of the games has been given a facelift, and runs at 60 FPS most of the time, there are times when the framerate for each title dips fairly significantly, and this happens often enough to be somewhat annoying. Also, the load times are a tad long considering that the first Bioshock game is almost ten years old. Call me nitpicky, but if I’m playing a remaster of an old game, I expect extremely slim loadtimes.

You know that jerk online that relentlessly trash talks you after every kill? That guy was probably Travis "Tie Guy" Northup. Competitive, snarky, and constantly wearing a tie, Travis has been writing his opinions about electronic media since he was a teenager, and is pretty much the only person to hold his opinions in high regard.
Related Articles: Bioshock: The Collection
Share
Tweet
Share
Submit