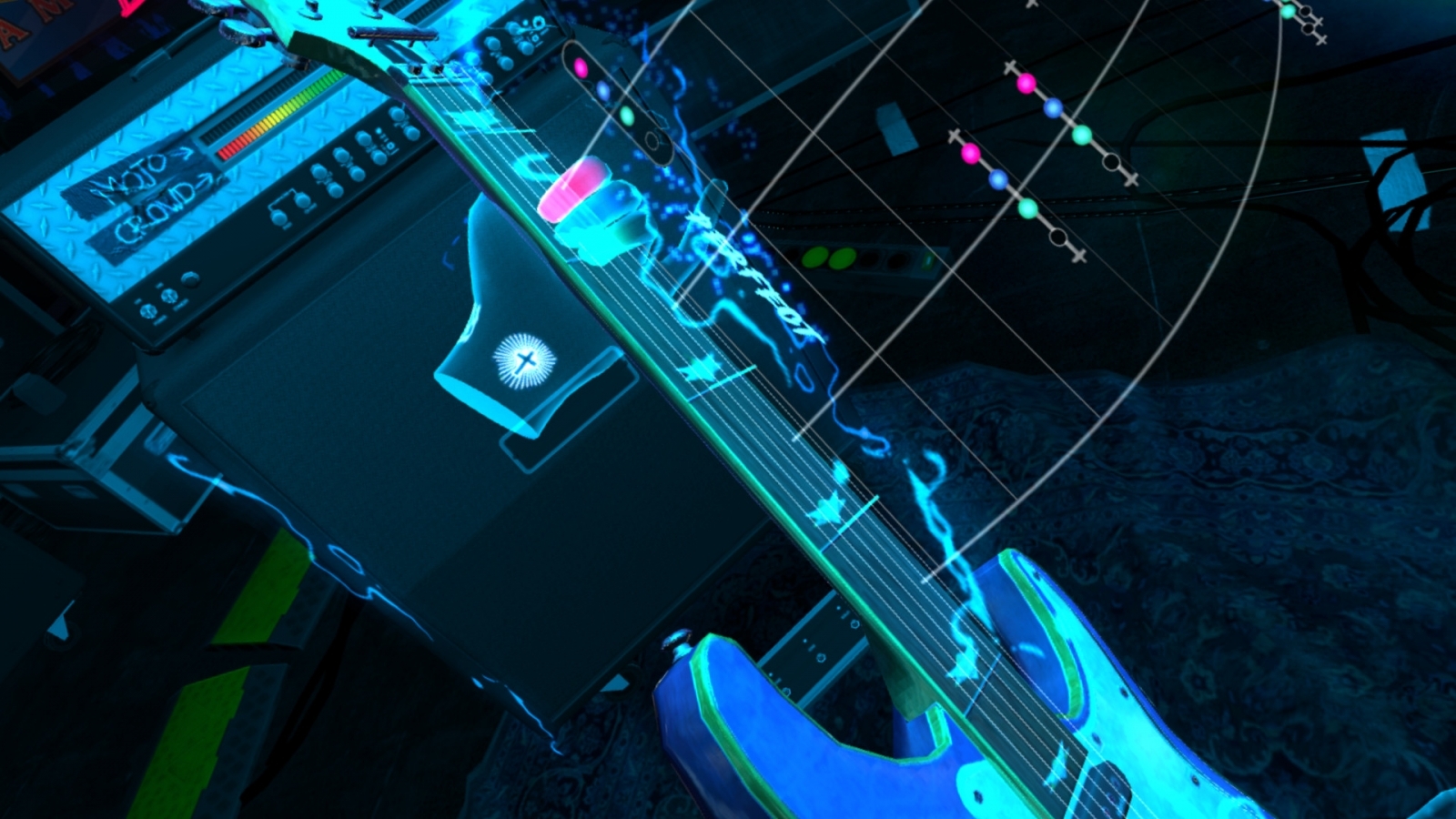 While I had a little bit of buyer’s remorse initially when I picked up the Oculus Quest 2 at launch, that has quickly dissipated with the surplus of games released for the headset. You’ve got things like Vader Immortal that let you wield both the Force and lightsaber, In Da Hoop which takes you back to the arcade to shoot a few baskets (our review here), and even crafting about in a little town in A Township Tale (another VR review here). Virtual reality is still in its infancy, but the amount of things you’re able to experience in it is not only growing, but getting better and better. Now, every kid wants to be a rockstar at some point, and the team over at Anotherway has set out to make those dreams come true in the virtual space. I had the opportunity to check it out, and while it has its flaws, I wanted to keep playing the more I figured out.

Unplugged starts with a little tutorial of you standing in front of a pretty realistic poster of Stachel, the lead guitarist from Steel Panther. Well, it turns out for some reason he’s trapped in there, and gives you the run through on how to be a pro on the guitar. Let me just say, as much as Anotherway was probably trying to go for “edgy rockstar”, I found Satchel’s curse words and crude remarks more cringey and off-putting. When the first thing the guy calls me is a nerd, it feels like I’ve already reached the end of my patience.

Back to the game, this opening monologue does prepare you for what you’re about to tackle, giving instructions on how to move your virtual axe, telling you to make sure the room is well lit, the whole shebang. It really just throws you in after these basics, assuming you’re going to figure out what comes next. While there’s not necessarily much more to the game, I didn’t have any idea on how to earn a “golden record”, which was one of my opening three goals. Given there’s very few reviews out at the moment, let me save you some time: it’s getting five “hook em horns/stars” on a song, which may sound easy but in reality will take some time to figure out.

Before I get into that, let’s talk about playing your air guitar. I’m really glad my wife wasn’t watching, because I get the feeling she would have brought out the camera to embarrass me on social media, as I’m sure I looked ridiculous. Besides looking silly, playing is pretty simple. One hand holds the virtual neck of the guitar, with four different rows you’ll be moving between, and four different colored “buttons” you’ll press, corresponding to your fingers. Could be you play your index and middle finger on the far left row, and then the next note requires adding in your ring finger on the third row. It’s a bit different than Guitar Hero that way, adding in moving across these rows along with different colored notes.

When you have to hit a note you’ll strum with your other hand, just like a real guitar. What makes this experience so unique is that there isn’t a plastic peripheral in your hand during it. Everything is played via the hand tracking of the Oculus Quest 2, and I have to say, I walked away pretty impressed. The toughest part with hand tracking is that you have nothing tangible helping you know you’re doing something right, and it’s one of the reasons I preferred using the Oculus controllers while playing In Da Hoop. That being said, Unplugged handles it with aplomb, and I generally didn’t feel like I was missing much not having an actual guitar shaped controller in my hands. The only times I did feel that way was when I missed notes, and thankfully that didn’t happen nearly as often once I figured this next thing out. 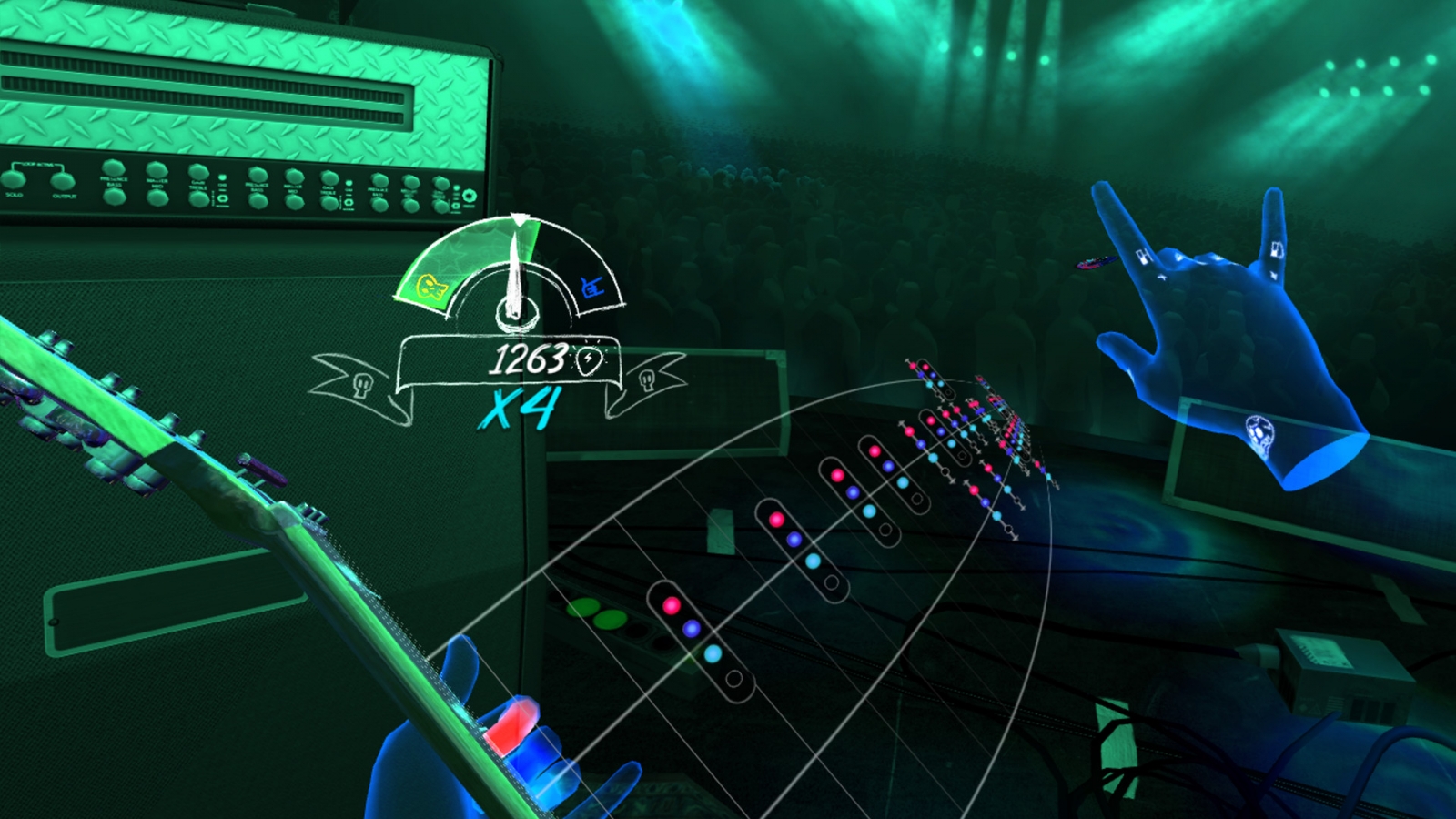 This next thing is the position of the guitar. I have to say, I started trying to play sitting down, but it doesn’t work very well that way. Once I moved to standing, it got better, but didn’t seem much better. Right when I was about to give up because I didn’t feel like I was making any headway due to the seemingly unforgivable difficulty even on easy, I decided to adjust the position of the virtual guitar as Stachel had shown in the tutorial. This is very simple, you just grab the neck in one hand before you start playing with one hand, and the whammy bar with the other and move it around until you’re happy with its location. I moved this virtual guitar from being higher up around my stomach to my hips, and man, did that make a huge difference. I think the main thing that happened was what I was seeing, and because my field of view encompassed more so I could see my strums and the incoming notes better, I did better in turn. Not only this, but it seems the outside cameras for the Oculus Quest 2 also could pick up my hand movement better from my looking down, resulting in quicker one for one tracking.

Once all of this was figured out I started hitting longer combos, and this is where the crux of this game lies. Your score is how you achieve the higher rankings on the game as well as the online leaderboards. The score also in turn helps you accomplish goals, which unlock the next album of songs. So, if you want to play any more than the opening five, you have to get cracking, because it takes a second to get things right. I somehow, after adjusting my guitar, hit every note on “Should I Stay Or Should I Go”, which at this moment is the number 7 ranking on the leaderboards on easy. Speaking of that, there are three difficulties, and they feel like they scale pretty fairly.

There’s sadly not much instruction for unlocking these new albums beyond three goals. While most were easy, get a 50 note combo or a score over 1,000,000, when I encountered the “earn three golden albums on easy”, I had no idea what it meant. It took playing until I accidentally tore it up on that song for it to happen, leading me to deduce what I was supposed to do. More instruction is always a good thing, so I hope Anotherway can find a way to add that into the game. 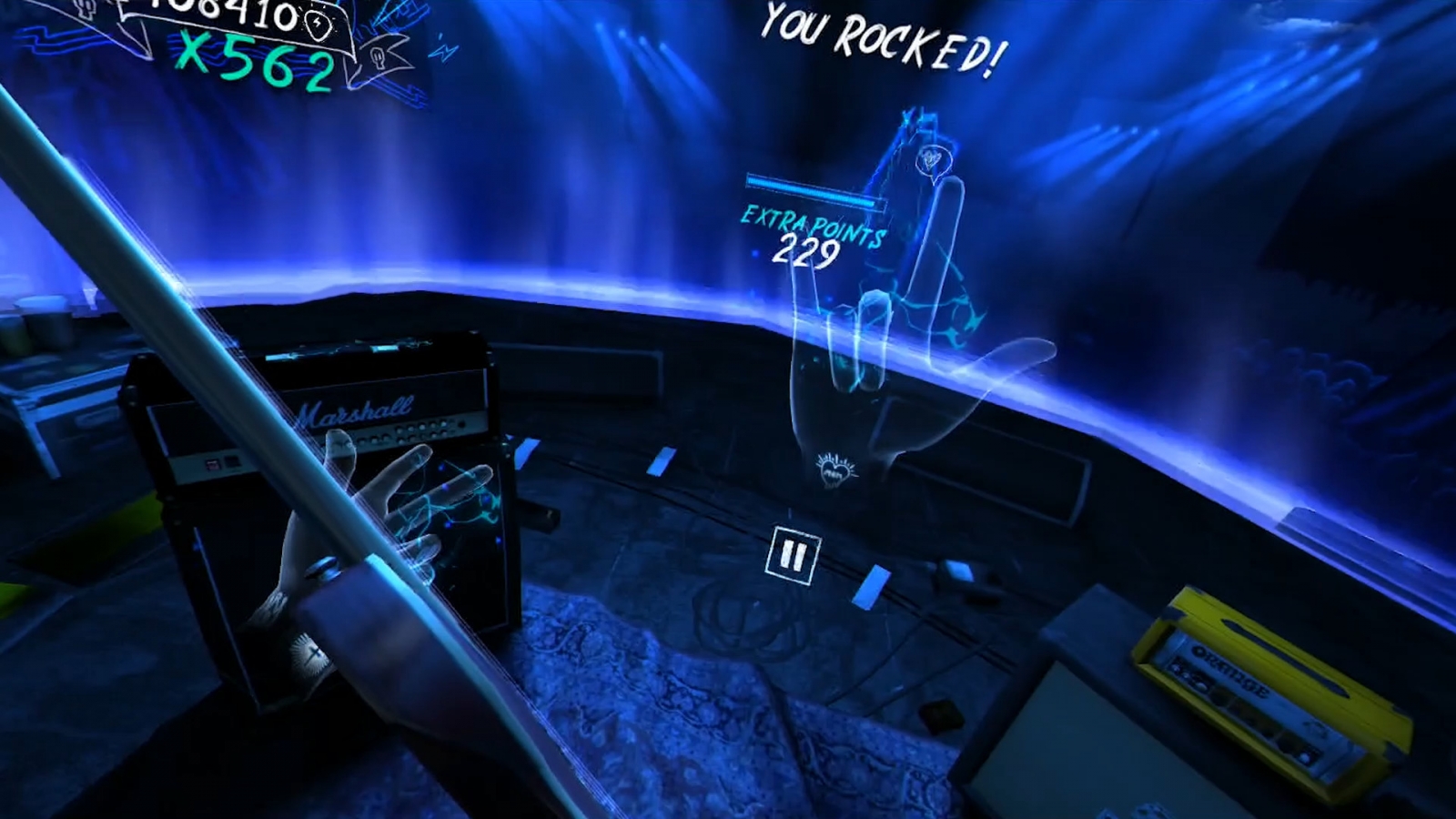 As for the song selection, I feel about the same way I do when playing Rock Band initially. Song licensing I’m sure is ridiculously expensive, and what seems to happen is ending up top heavy, with all your chips in on five or so songs and surrounding those with cheaper ones. This is definitely the way Unplugged works, with big ones like Tom Sawyer by Rush and Say It Ain’t So by Weezer tentpoles, and some lesser ones like Left Hand Free by Alt-J and Children of the Revolution by T-Rex. It’s par for the course really, and while I’d like more songs, twenty-three is a pretty great number for a VR game. Hopefully there will be an option to buy more in the future, or possibly some free additions come from an update. As we know from Beat Saber (to make a VR reference), people will definitely pay for new songs. The good news with all the songs is they sound great, even without having headphones in or on.

There’s also some customization options when it comes to the virtual guitars. What’s funniest about the whole thing is you unlock them by getting more fans, which is done by catching undergarments at the end of playing a song. The options available are pretty neat, and even include some licensed Schecter variants. I can’t say it really matters that much, not being that visible during play, but any extra customization is fine by me.

Unplugged is actually a pretty cool way to bring the Guitar Hero format to VR. I was really impressed with the hands tracking, and the setlist is largely good, with a few nice big name tracks along with some lively lesser known ones. I could deal with plenty less Satchel, and would prefer in his stead more direction on what I'm doing, but all and all Unplugged is a rockin' fun time.

David Burdette is a gamer/writer/content creator from TN and Lead Editor for Gaming Trend. He loves Playstation, Star Wars, Marvel, and many other fandoms. He also plays way too much Call Of Duty. You can chat with him on Twitter @SplitEnd89.
Related Articles: Unplugged, VR
Share
Tweet
Share
Submit