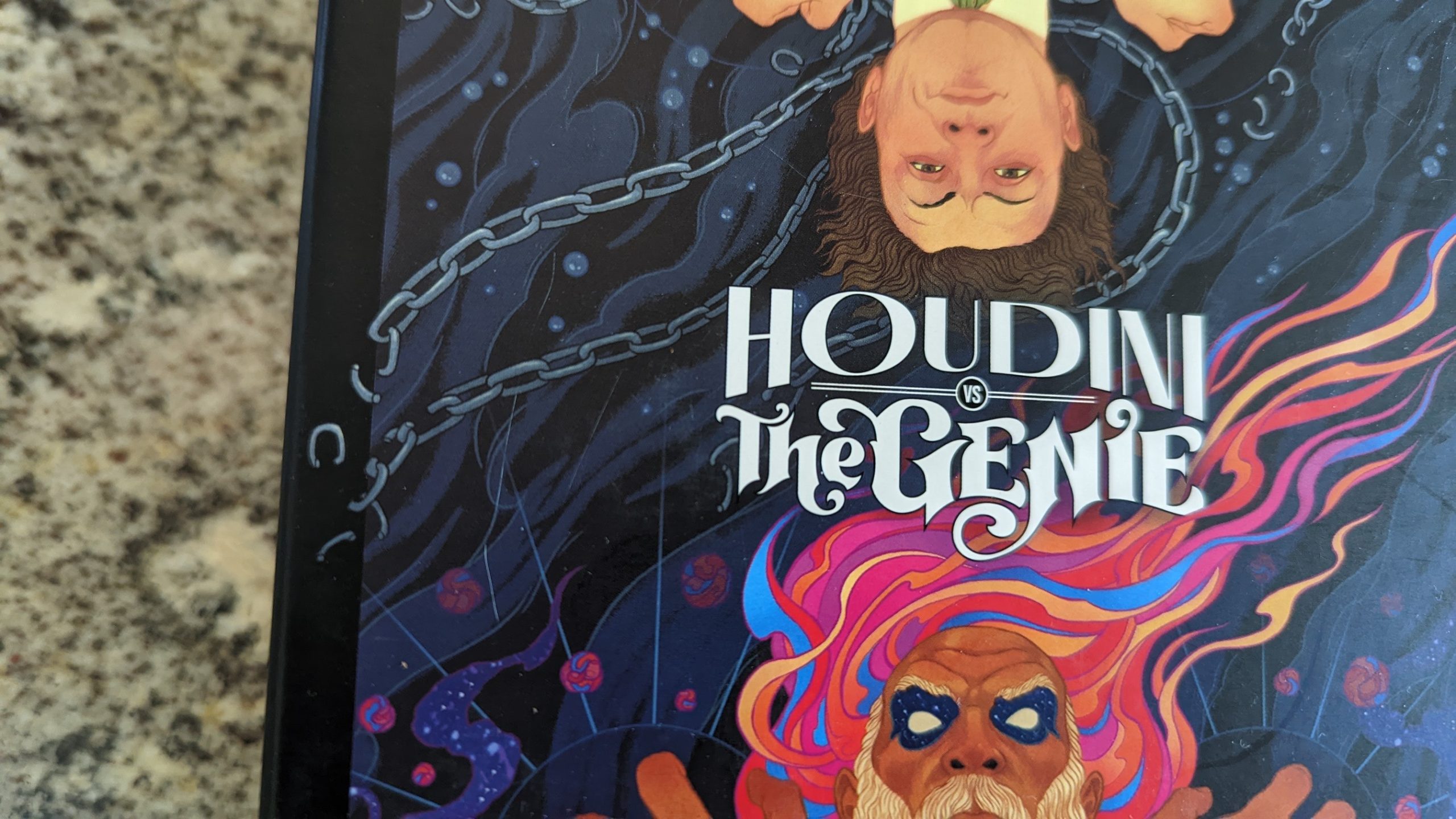 I had been faced with a dilemma when writing previous Unmatched reviews. Since each set is essentially a standalone expansion, should I approach it primarily as an introduction to the system and potentially some players’ sole exposure, or as another iteration for people already familiar with Unmatched? Previously, the sets had been good enough at both that I could simply talk about the box and feel like I had done my job. Unfortunately for me, the experience for a seasoned player and a newcomer is disparate enough that I feel like I need to address them separately, subdividing this review into two mini-reviews. 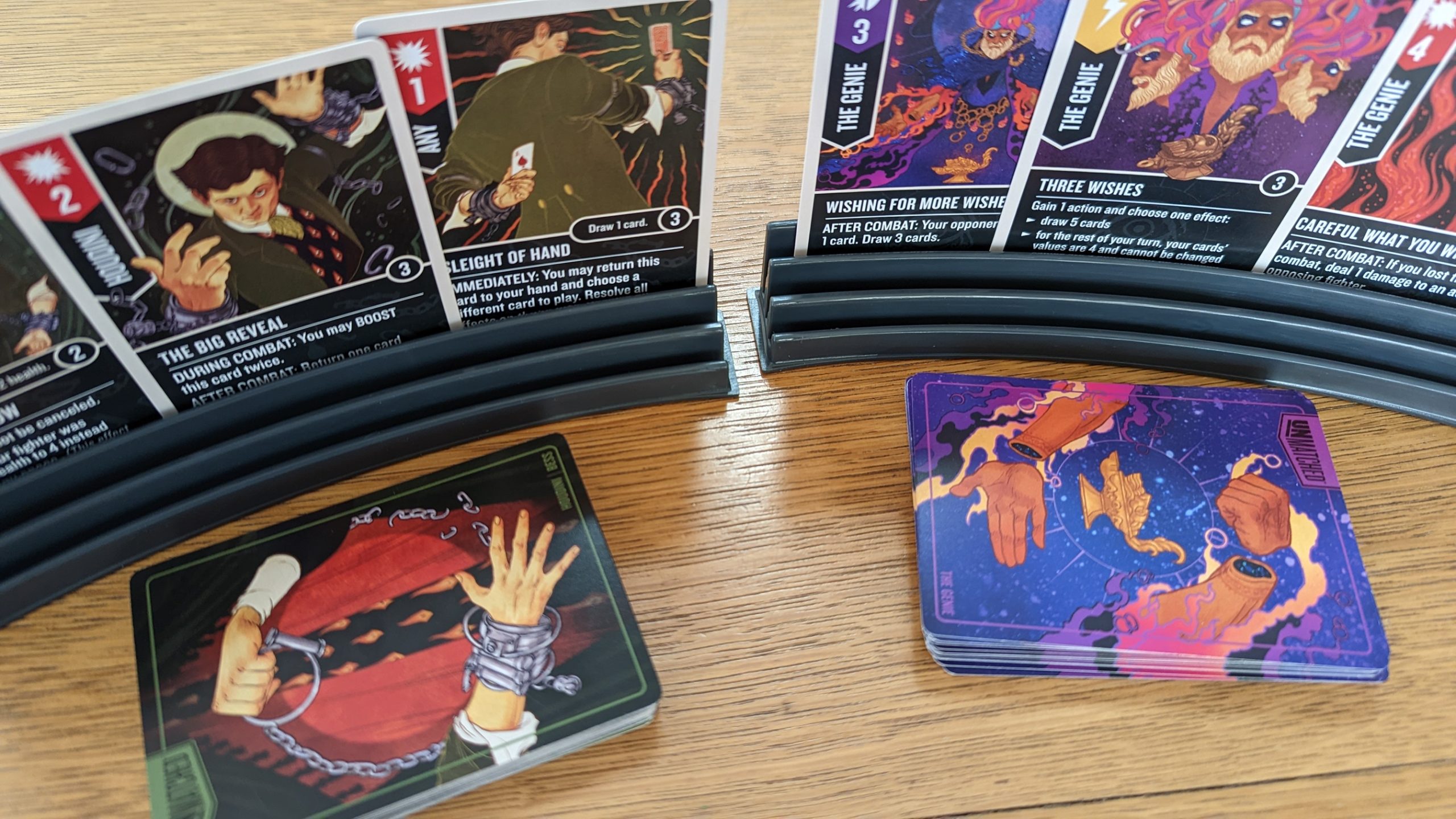 As the next chapter in Unmatched, Houdini vs. the Genie is a worthy successor to Battle of Legends Vol. 2, playing with the design space provided by the already existing mechanics without adding anything to the overall rules. While that box primarily focused on sidekicks with Bloody Mary toying with action economy, Houdini fusses with boosts and movement and the genie busts in like a Koch brother, using his absurd economic advantage to do a load of damage before fizzling out and dying. Houdini’s power lets his player just pick him up and place him wherever on the map whenever he performs a boosted maneuver, but the real trick to his deck is his addiction to boosting. Like King Arthur before him, Houdini is going to want to boost a fair share of his attacks, but he has the unique benefit of boost bonuses. These are additional effects printed on Houdini’s cards that take effect when they’re used in any boost, but as he lacks Arthur’s ability to simply boost whenever he feels like it, he’s forced to either use them on a maneuver or sit on them until he can drop an attack that explicitly allows itself to be boosted, hoping it’s not feinted. All that’s to say is fun and interesting to play for fans of Unmatched, but is difficult to pilot successfully. The genie, on the other hand, feels like a high tier rushdown character from a fighting game. The easiest way to explain how powerful he feels is to dive into his ability, Infinite Power: at the start of his turn, he can discard a card to gain an action. In a game like Unmatched that’s very much about having the right card at the right time, this would be strong if it only allowed the extra action to be a maneuver, since he could simultaneously reposition himself and cycle a card for free once a round. But it’s not limited to that, it lets you attack three times in one turn, enabled by range and his card advantage. A lot of his cards fuss with hands, exemplified by Three wishes, probably the best scheme in the game. It replaces the action used to play it, and then gives the player the choice of three potent options. Like Alice’s Looking Glass with roid rage, the weakest option, locking in your attacks at 4 strength for your turn, is good enough and situationally useful, but the real stars of the show are drawing 5 or forcing your opponent to discard two, which can and will close out games in the genie’s favor when it means three attacks into an empty hand. 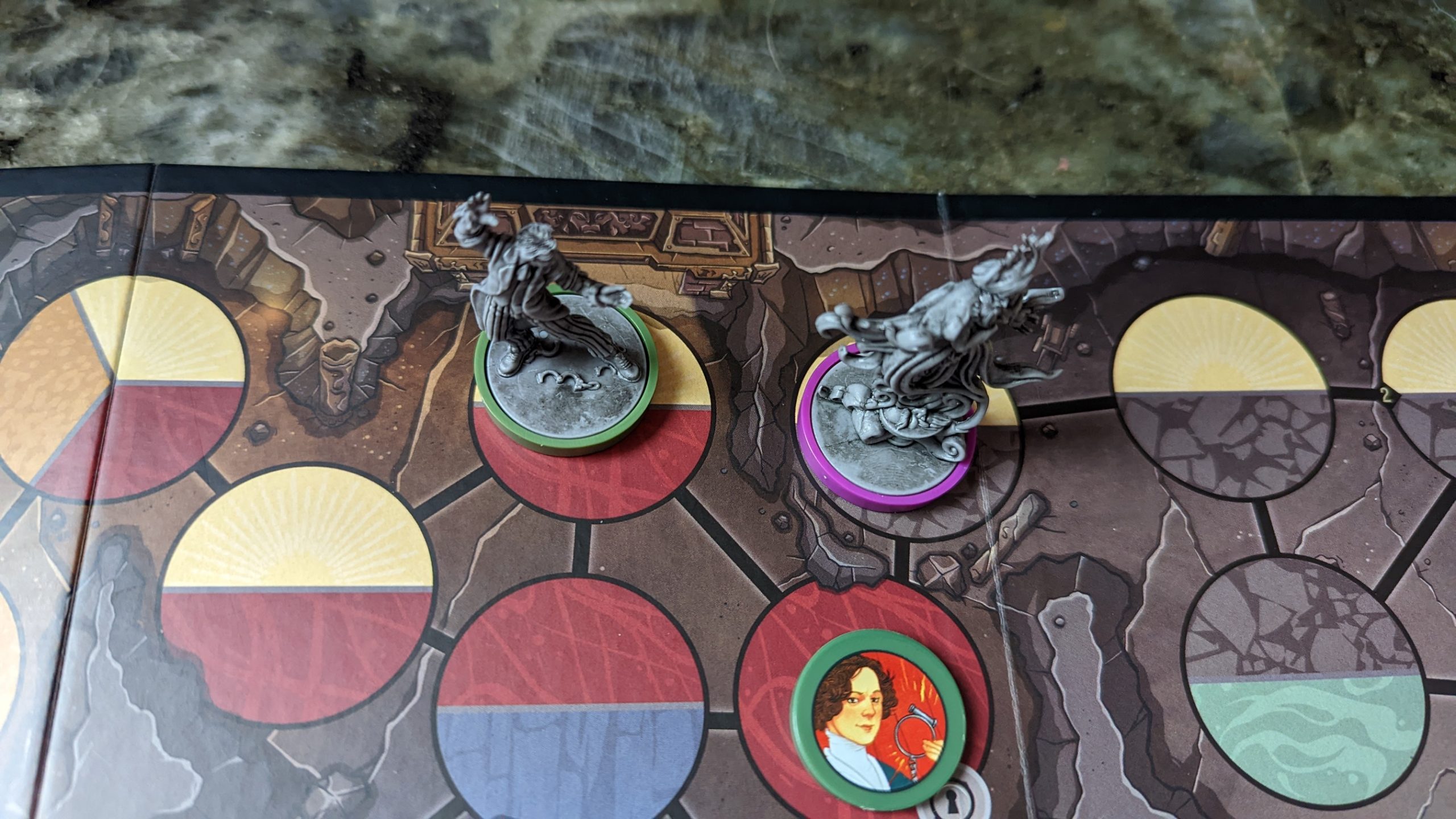 Although I’ve very much enjoyed my time with this set, I simply cannot recommend Houdini vs the Genie to newcomers, and it really comes down to character complexity and imbalance, which are magnified by the included map. Playing entirely within the box, Houdini really isn’t a match for the genie, especially for newer players. Houdini does his best when he can run away until he can build up into a couple huge boosted swings, but between the map’s secret passages effectively shrinking it into the game’s smallest and the genie’s range, he’s incapable of escaping the genie’s early aggression without taking a beating he will not recover from. Similar in-box balance arguments could be made against the Sattler vs T-Rex set, but Houdini lacks the straightforward fun factor of the T-Rex’s oversized mini and health dial. When played on larger maps, especially those that can play into melee characters’ strengths, like Hanging Gardens, Houdini does have a puncher’s chance against the genie, but on King Solomon’s Mine, the genie is undefeated, which makes me worry that this set could turn off newcomers. The original Battle of Legends set probably stays top of the pile for beginners, and if you absolutely have your heart set on one of the two character boxes, Robin Hood vs Bigfoot stays relatively simple and isn’t quite as skewed a matchup.

Unmatched: Houdini vs. the Genie

I wholeheartedly recommend Houdini vs the Genie as an expansion for someone who is already collecting Unmatched, but if you're new to the system, maybe pass on this one for now.

Nick grew up reading fantasy novels and board game rules for fun, so he accepted he was a dork at an early age. When he's not busy researching the intricacies of a hobby he'll never pick up, Nick can be caught attempting to either cook an edible meal or befriend local crows.
Related Articles: Tabletop, Unmatched: Houdini vs. the Genie
Share
Tweet
Share
Submit