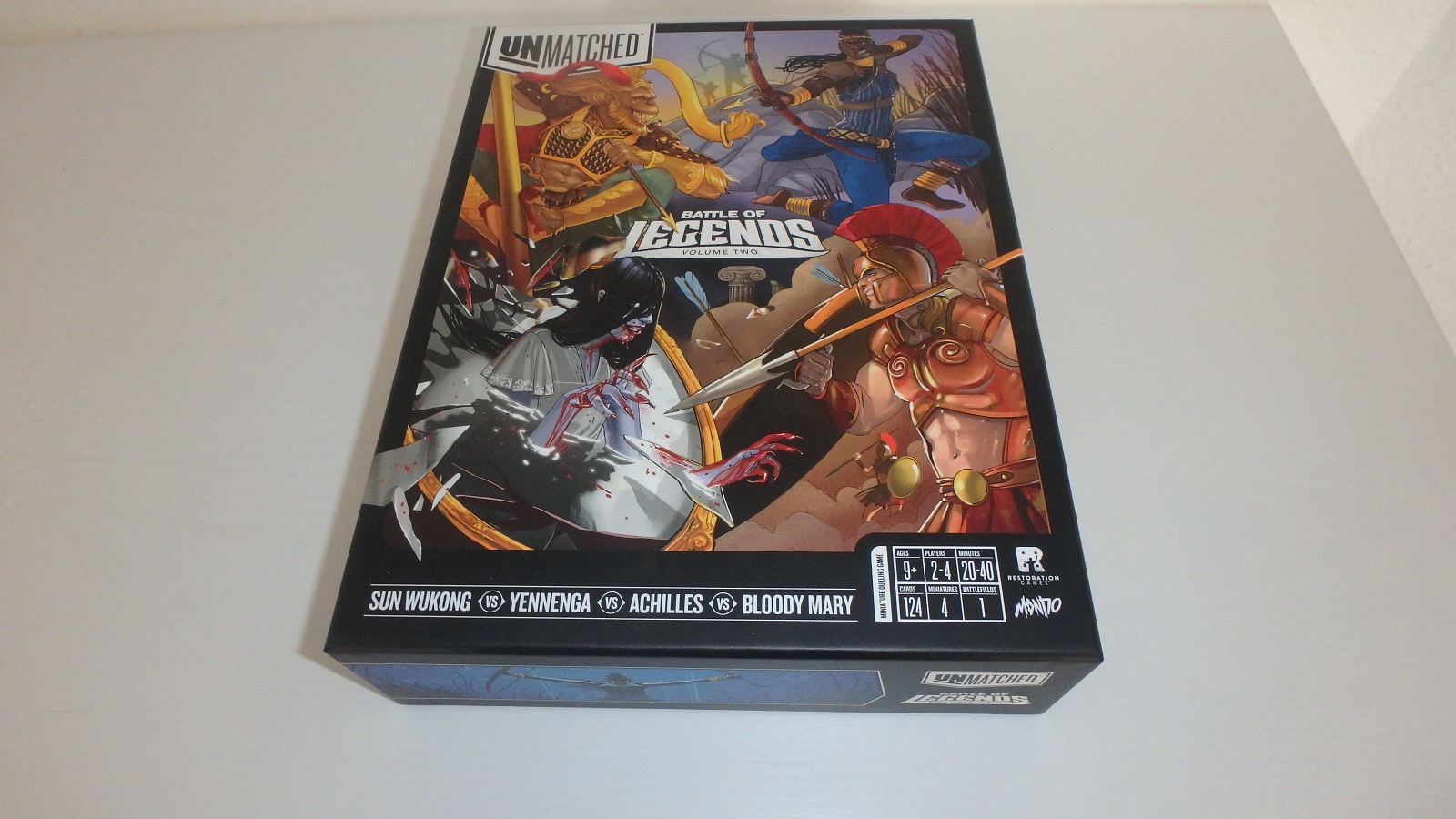 Back in 2019, Restoration and Mondo unveiled their Unmatched system with Battle of Legends, Volume One. For those that didn’t read our initial review, it was an extremely successful reimplementation of the long out-of-print Star Wars: Epic Duels game with mildly revamped gameplay and without the Star Wars license. The simplicity of the rules (players take turns performing two actions from moving, attacking, and playing scheme cards) combined with the gorgeous art made it easy to get to the table, and the interesting tactical decisions and breath of playable fighters, especially after expansions, gave it real sticking power. The question is, three years and a handful of expansions afterward, how does Volume Two stack up?

The easiest and most immediate comparison anyone’s going to make is the production, and the enduring quality is unquestionable. The fighter minis still are wonderfully detailed, and the sidekick tokens yet again are quite nice without feeling overproduced. Of course, the real visual draw in Unmatched is the card art, and I’d argue that the deck backs and individual cards are better than ever. The insert is great at keeping everything organized in a way that makes setup lightning fast, even if I’m getting to the point where I’m starting to consider consolidating all of my sets into one box, purely from a storage space standpoint. Finally, the rulebook has actually seen a few improvements, since it goes a bit more in-depth with examples for the more intricate fighters’ abilities.

Volume Two features four new fighters, and it really stands out how much three years of playing in the Unmatched design space has improved the quality of play. While the balancing is mildly questionable this time, there definitely aren’t any King Arthur-level duds in this box; everyone’s a joy to play. With the noticeable exception of Bloody Mary, who doesn’t have a sidekick, the overarching theme of this set is playing with sidekicks- Yennega, Achilles, and Sun Wukong all have incredibly unique mechanics that revolve around their sidekicks. 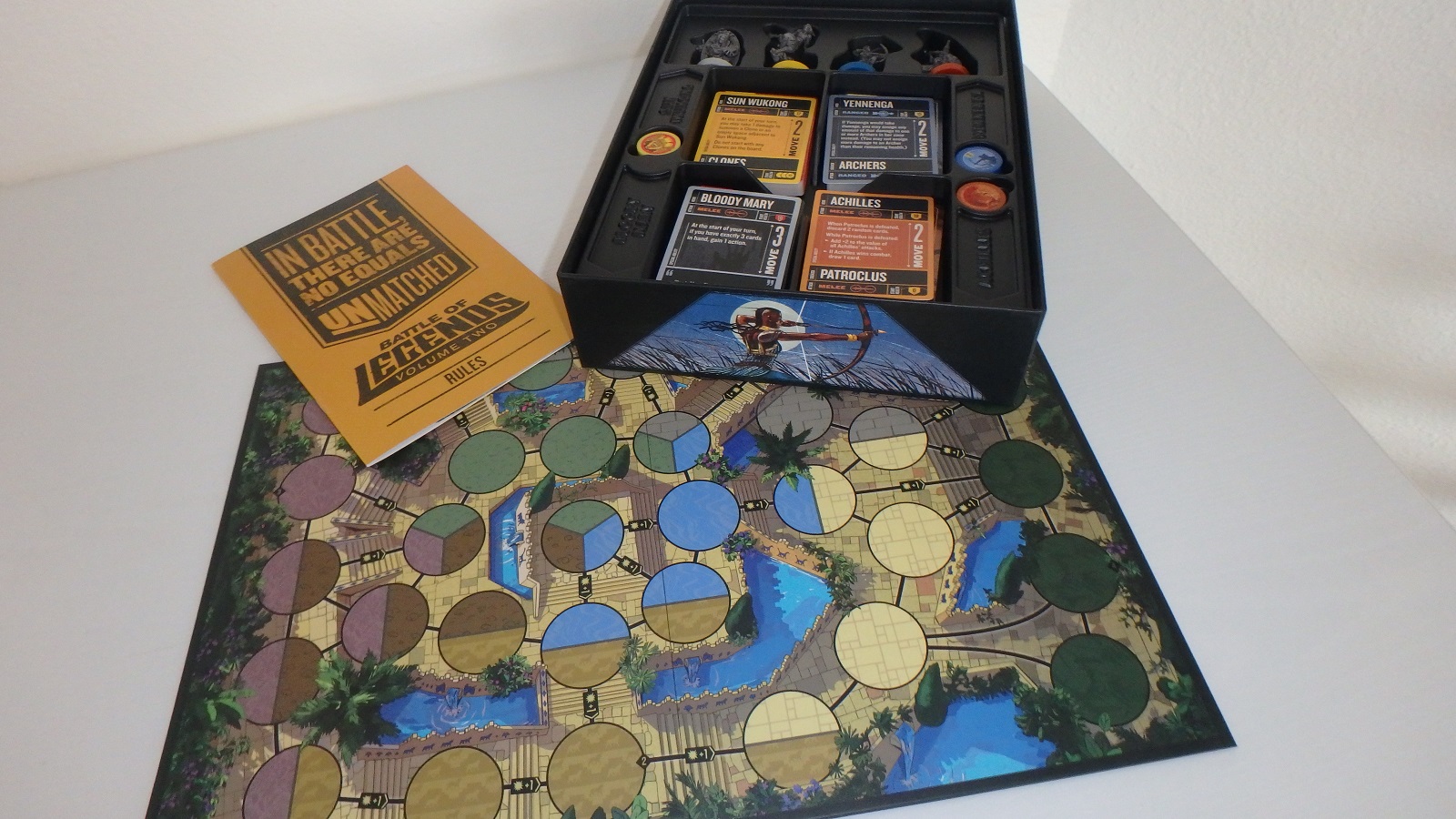 Sun Wukong’s sidekicks are probably the most unique; he doesn’t start with any on the board and instead can take damage on the start of his turn to drop a clone in an adjacent space. While these clones have the normal multiple sidekick weakness of only having one health, since Sun Wukong’s deck is made entirely of “any” cards, they are functionally Sun Wukong for every other purpose. Combined with Sun Wukong’s absurdly potent attack and defense cards and the scheme that heals him for every clone on the board, he becomes a nightmare for any fighter that lacks unblockable or area of effect damage to handle his proxies.

While Sun Wukong wants to stay comfortably removed from the fighting and let his clones do work, Yennega wants to get in the scrum and get her hands dirty despite her ranged attack. Her sidekicks are a pair of two-health archers, who she can divert damage to as long as they share a zone. The deck features an abundance of heals and ways to bring back dead archers, some extremely effective tools for repositioning both allies and enemies, along with sweet payoffs for proper positioning.

Thematically, Achilles and his sidekick Patroclus are best friends, but you’d never guess it from his ability. You see, once Patroclus dies, Achilles gets +2 to all of his attacks for the rest of the game, turning even normally weak feints into four damage beatdowns. And it’s not like he has to try all too hard to get Patroclus offed anyways; his deck is chock-full of ways to throw Pat under the bus, including having him just straight-up taking attacks meant for Achilles. I almost feel bad for Patroclus, the poor man’s only purpose is to die in service of activating Achilles’ rage.

Bloody Mary, as I already mentioned, is the odd woman out in Volume Two since she’s a solo fighter. That isn’t to say she isn’t very unique in her own right- in a game where having a healthy hand size is desired to expand players’ options in attacking and defending, Mary rewards keeping a slim hand. Her ability gives her player a third action on their turn, but only if they start the turn with only three cards in hand. A lot of her cards replace themselves or give extra actions to enable this strategy, and she has a full suite of attacks that have powerful effects that trigger if they are the third action. While she may be the weakest fighter in this set, she’s at the very least a fun handicap to give to seasoned players coming against newcomers, and who knows, with some practice, she may become a force to be reckoned with.

Of course, the fighter’s new abilities aren’t the only fresh design idea in the box. The new map, Hanging Gardens, introduces the high ground mechanic, plopping +1 damage arrows around the map. While this may seem minor, it adds some real intricacy to the movement and positioning game- in the games I’ve played on this map, there were numerous times where I had to second guess otherwise simple positioning decisions, since what would have otherwise been the obvious placement would actually give my opponent an extra damage that I wasn’t sure I could afford. 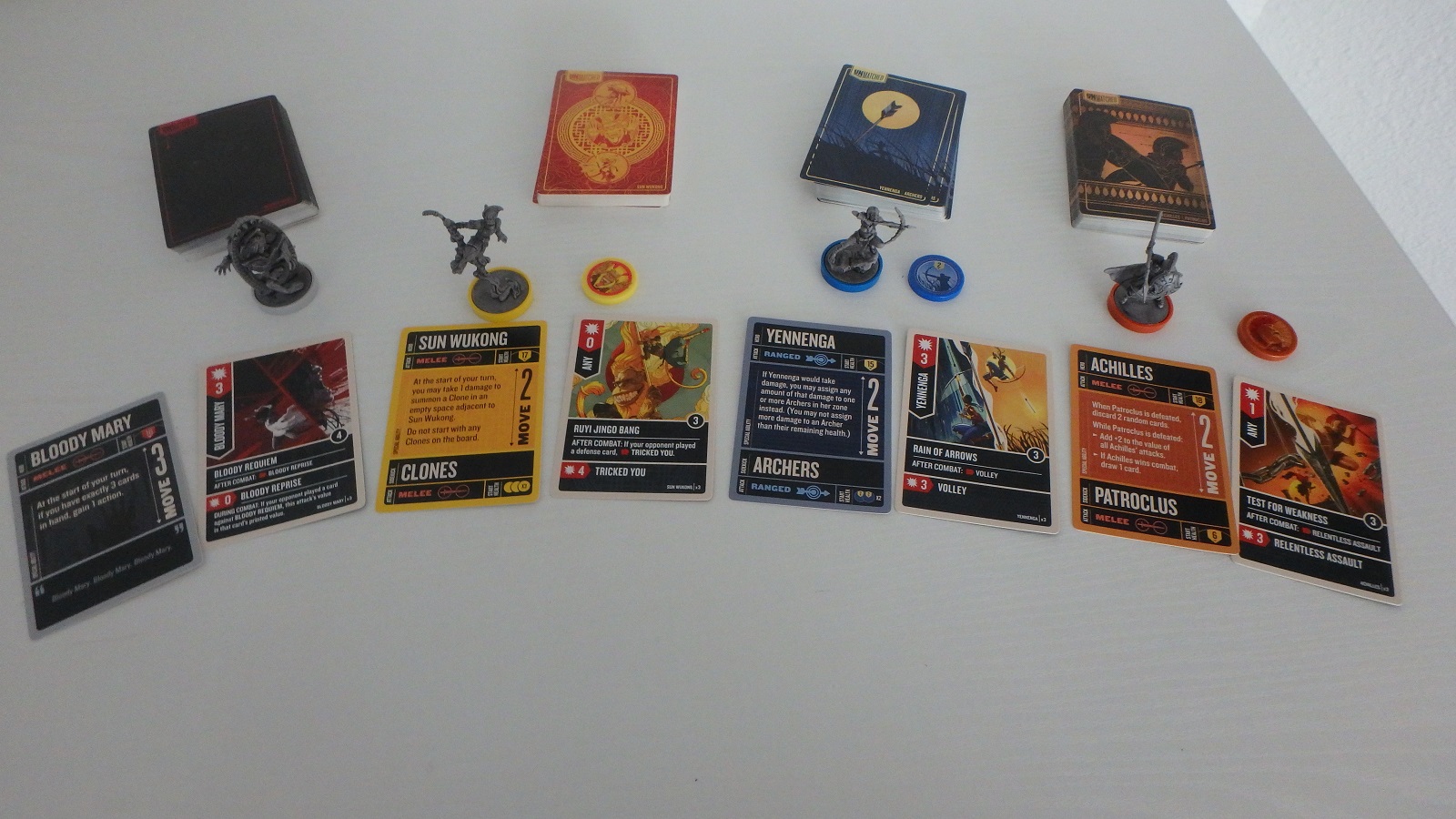 Along with the new map mechanic, Volume Two also features new bonus attack cards, but I’m not so sure about this one. Each fighter has three copies of an attack card that, after resolution, starts a new combat with a bonus attack on the bottom of the card. While Bloody Mary and Achilles’ aren’t exactly perversely strong, Yennega’s is a straight-up three attack into another three attack, which feels a smidge overtuned. When you add in a bonus damage from high ground, these attacks can feel really unfair, especially if you’re playing with fighters from outside this set. However, the absolute worst feeling is Sun Wukong’s “Ruyi Jingo Bang”, a zero attack that, when blocked, is followed up with a four attack. Accounting for his multiple seven strength attacks that have to be both blocked and boosted against to avoid being blown out, defenders are stuck in a 50/50 guessing game where the wrong decision can be game-defining.

Though I do genuinely appreciate a lot of the decisions and innovations in this box, I also have a couple nitpicks. The added intricacies introduced in Volume Two are a lot of fun for me as a seasoned player of the Unmatched series, but it may not be the best set to start off newcomers on. I’m also not a fan of the flip side of Hanging Gardens, where they continue their recent trend of repeating the map with spaces only having zone colors on the edge. It wasn’t great on a muted map, but on something as already visually busy as Hanging Gardens, it really makes the board hard to read, and I would have just preferred a second map like in the early sets. All in all, though, these are relatively minor complaints, and I wouldn’t hesitate to suggest this game to anyone that is interested.

Unmatched: Battle of Legends, Volume Two is one of my favorite sets in this series; the designers continue to innovate and introduce new and interesting mechanics that keep the game from getting stale. While I may not recommend this as a starting point for people new to Unmatched, it’s definitely a must-buy for fans.

Nick grew up reading fantasy novels and board game rules for fun, so he accepted he was a dork at an early age. When he's not busy researching the intricacies of a hobby he'll never pick up, Nick can be caught attempting to either cook an edible meal or befriend local crows.
Related Articles: Tabletop, Unmatched
Share
Tweet
Share
Submit