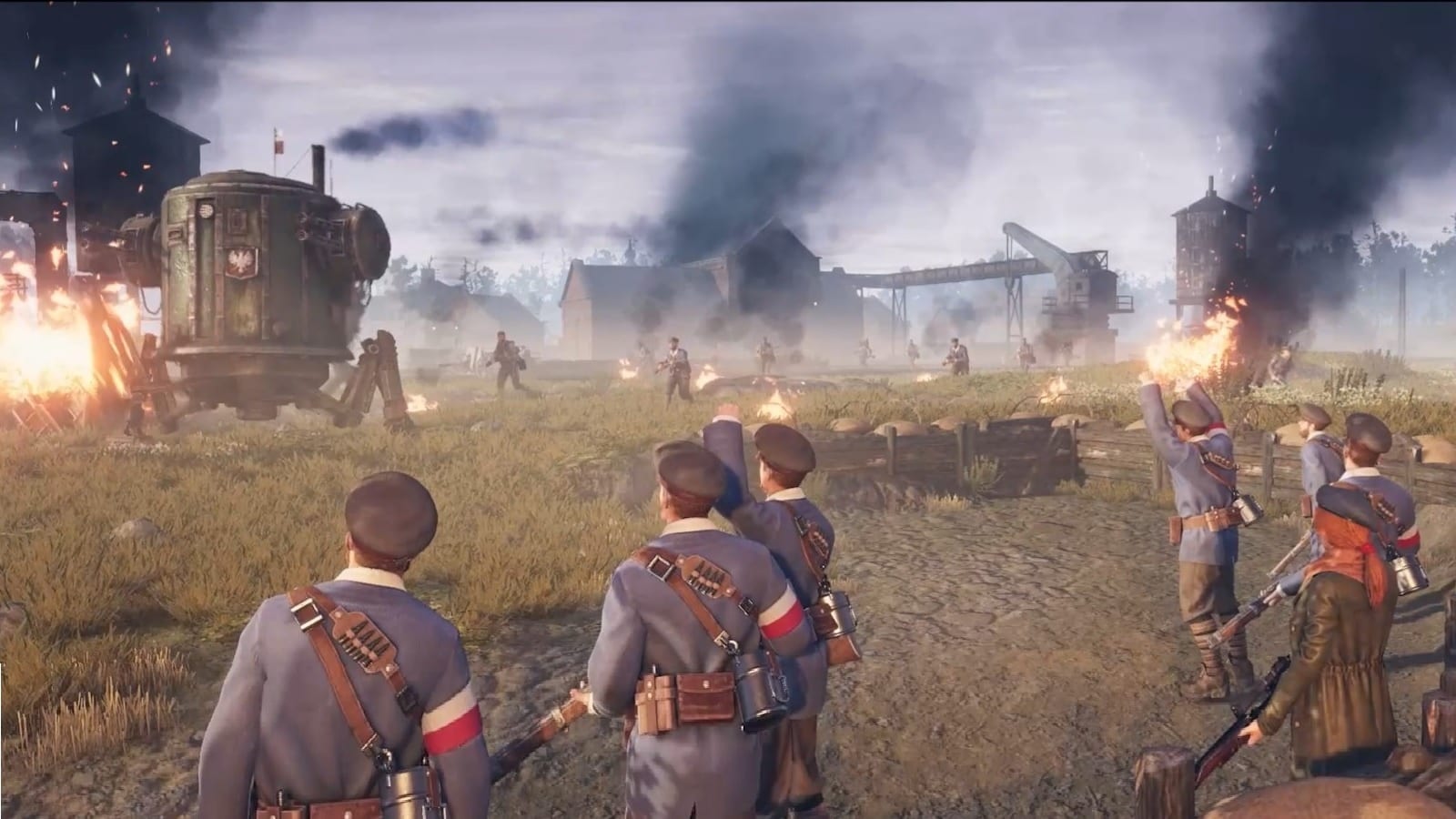 Four decades ago, real-time strategy put down its roots in preparation for its conquest of the strategy world. And conquer it did; RTS has since grown into a goliath of a sub-genre. Decades of commanding armies, both large and small, in a struggle against impossible odds. Decades of virtual battlefields scarred by bullets, stained with blood, and seared by bombs. But despite its perceived prominence in today’s space, some say the sub-genre has plateaued. Age of Empires II, StarCraft II, and Company of Heroes 2 continue their lengthy reign, while newcomers seldom do more than kick up a bit of dust.

It’s anybody’s guess whether or not Iron Harvest can grow into a game capable of dethroning RTS’ aging titans. Presently, it lacks the complexity of the sub-genres favorites, and is without any true novelty or innovation. But, King Art Games is helping to revitalize the sub-genre in its own way. The game is a smart, community-led celebration of RTS, and a love letter to the games that captivated so many gamers. You quickly forget what’s missing, and commit yourself fully to the joyous process of obliterating bases. 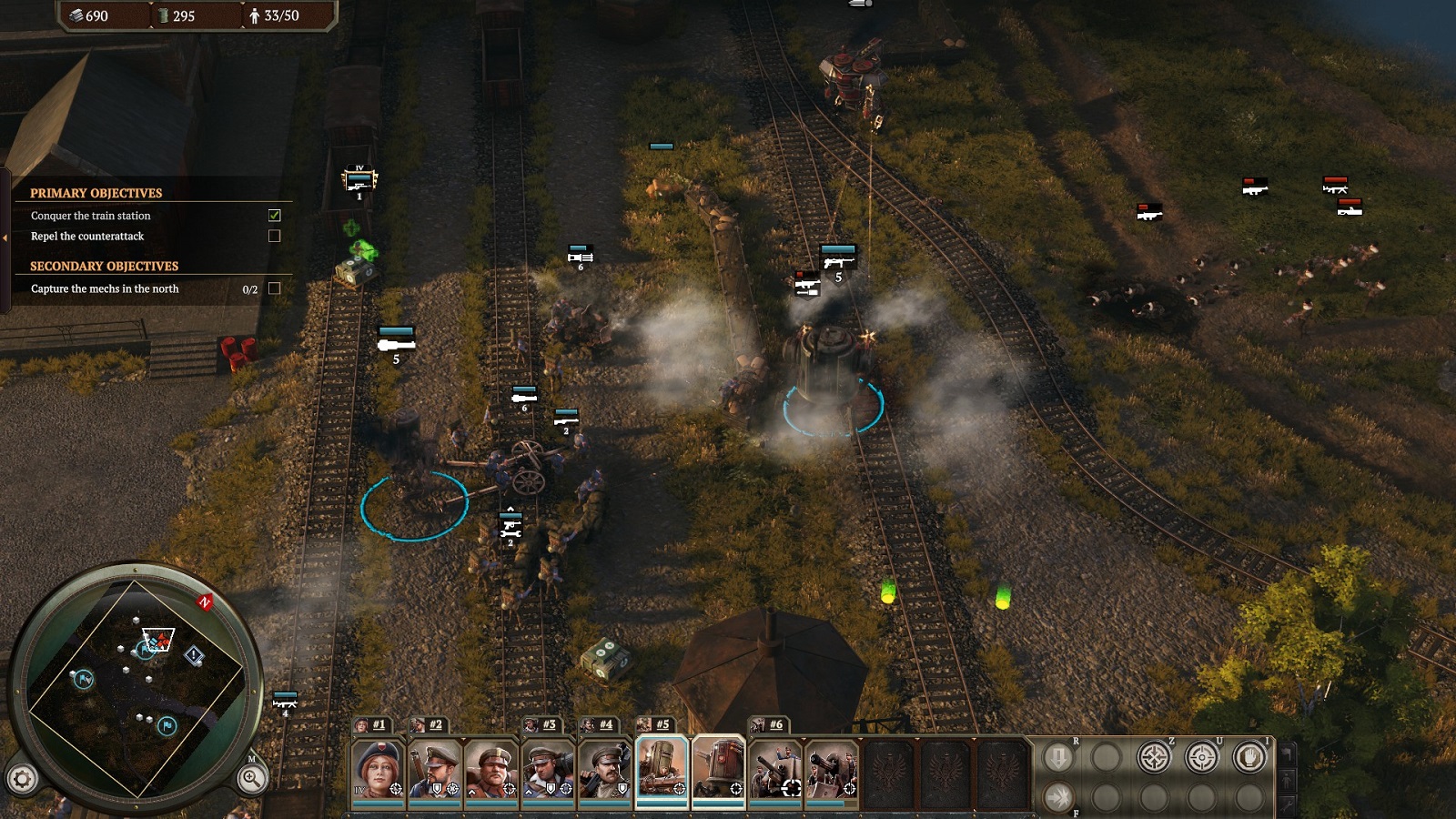 Iron Harvest finds its setting in Jakub Różalski’s alternate-history 1920s, something it shares with the popular board game, Scythe. It sees a post-Great War Europe, dipped in dieselpunk aesthetics, on the brink of yet another war — courtesy of a shadowy cabal and its influential members. It’s the unmasking of this organization that unites the heroes of the game’s three factions: the Polanian Republic, the Rusviet Union, and the Saxony Empire.

The meaty single-player mode is broken up into three faction campaigns, each one continuing where the previous left off. Every campaign features seven lengthy missions with cutscenes interspersed between them. Unfortunately, as the campaigns is entirely linear, you cannot start with the faction of your choosing. The Polanian Republic is up first, introducing you to Anna Kos and her bear, Wojtek.

The game deserves praise for representing such a grand story with so many moving parts through a very intimate lens. Doubly so given the very impersonal nature of RTS, where you typically control countless faceless units from above. The story of Iron Harvest remains easy to follow, with characters you care for on and off the battlefield. The Polanian campaign doubles as a tutorial for the game, introducing you to all the tools at your disposal, and all the tricky situations where you might find yourself.

The two following campaigns, Rusviet and Saxony, introduce even more variety into the mix. Many take you away from building up your base and towards more interesting mechanics, like stealth. What’s important to note is that nothing overstays its welcome. Iron Harvest’s campaigns are well paced, keeping me playing mission after mission without much burnout. With 21 missions and 21 cutscenes across three campaigns and factions, the single player in undoubtedly Iron Harvest’s highlight. 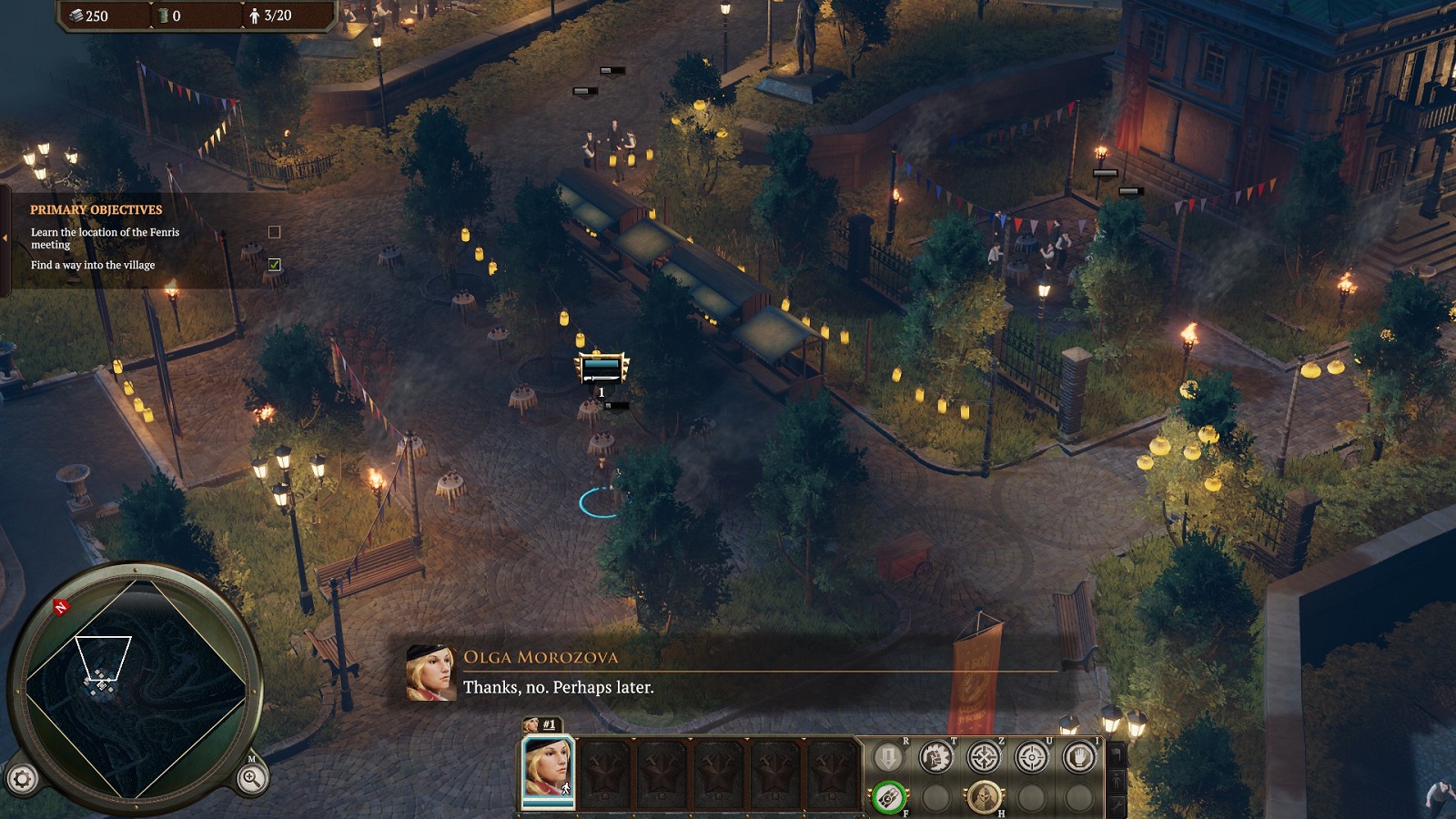 Build a base, spawn units, gather resources and win fights, and upgrade — rinse and repeat. The classic loop is, as you can guess, present and unchanged in Iron Harvest. Players start out with a small number of resources and units for their headquarters, their barracks for human units, and their workshop for mech units. Base building falls on the engineers, who can also build up barricades, defenses, and repair mechs. Other units should be sent off to do battle and level up, and capture oil and iron sources — the game’s primary resources. With these resources, you can upgrade your structures to produce more expensive, but powerful, units.

All three factions share similar human units: your typical spread of grenadiers, machine gunners, medics, engineers, and more. What set them apart are their hero units, including Polania’s Anna and Wojtek, but more significantly, their pool of dieselpunk war machines. Each one sports monstrous amounts of health and firepower, are capable of splitting apart and disrupting your ranks with a few AoE shots, and come equipped with their own abilities on a cooldown as well. The moment these clunky beasts hit the battlefield, the entire dynamic shifts. To comfortably confront the mechs requires the proper unit selection and positioning. Luckily most are fairly slow, but still demand sufficient firepower to down during your base assaults.

Hero units, which include a number of specialized mechs, are equally threatening, but limited in number. Each faction only has access to a tiny pool of heroes, but their utility should never be undermined. Commander Sikorski and his cavalry, for example, can devastate mechs with his sticky bombs and harass squads with his charge. All units level up as they participate in battle, boosting their stats and granting them new skills. The game encourages you to keep your units alive and supported, lest you want an army of greenhorn soldiers. 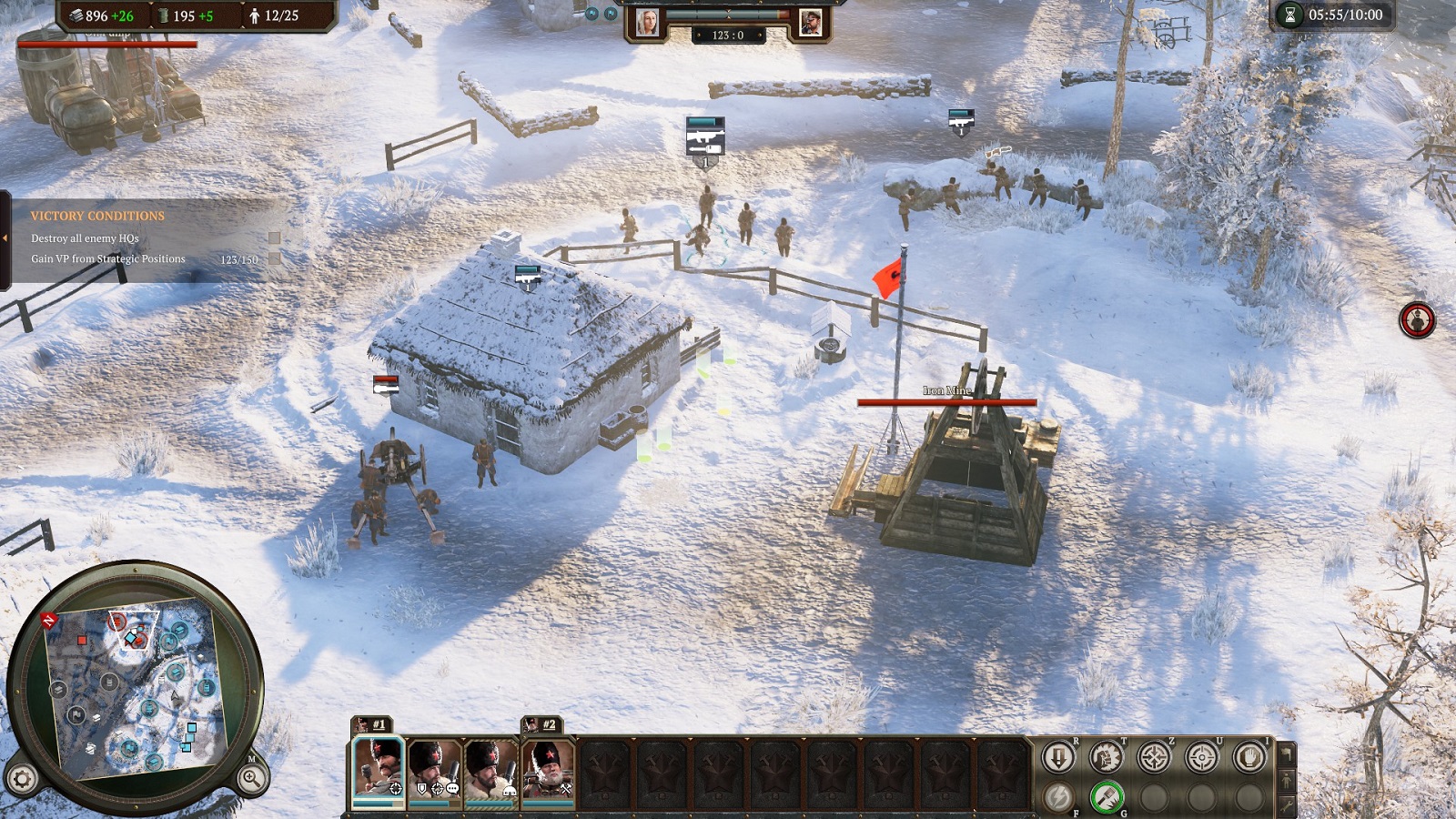 Iron Harvest offers an intuitive UI and a plethora of hotkeys, allowing for quick and precise maneuvers on the fly. You can group units together, build structures, and change unit behavior quickly and efficiently. It’s surprisingly easy to pick up and play versus a number of more intimidating titles. All shortcuts can be edited in the game’s controls sub-menu as well. The appropriate dialogue barks help convey information quickly and succinctly, even if the audio mix leads to certain key sounds being drowned out at times. It’s also common to hear multiple instances of the same sounds go off simultaneously, leading to awkward audio peaks and awful distractions.

Unit AI is arguably Iron Harvest’s weakest link. It’s not uncommon that units find themselves stuck, or that a few stragglers will decide to take a separate path to an objective than the rest of the army. Additionally, issuing commands is occasionally met with deafening silence. Units, especially when grouped, may ignore a command to attack and instead wait for you to reissue said command. It’s also impossible to target a single soldier individually, which leads to some seriously unfortunate circumstances where a lone soldier separated from its unit can harass your backline, forever blind to the danger beside them. 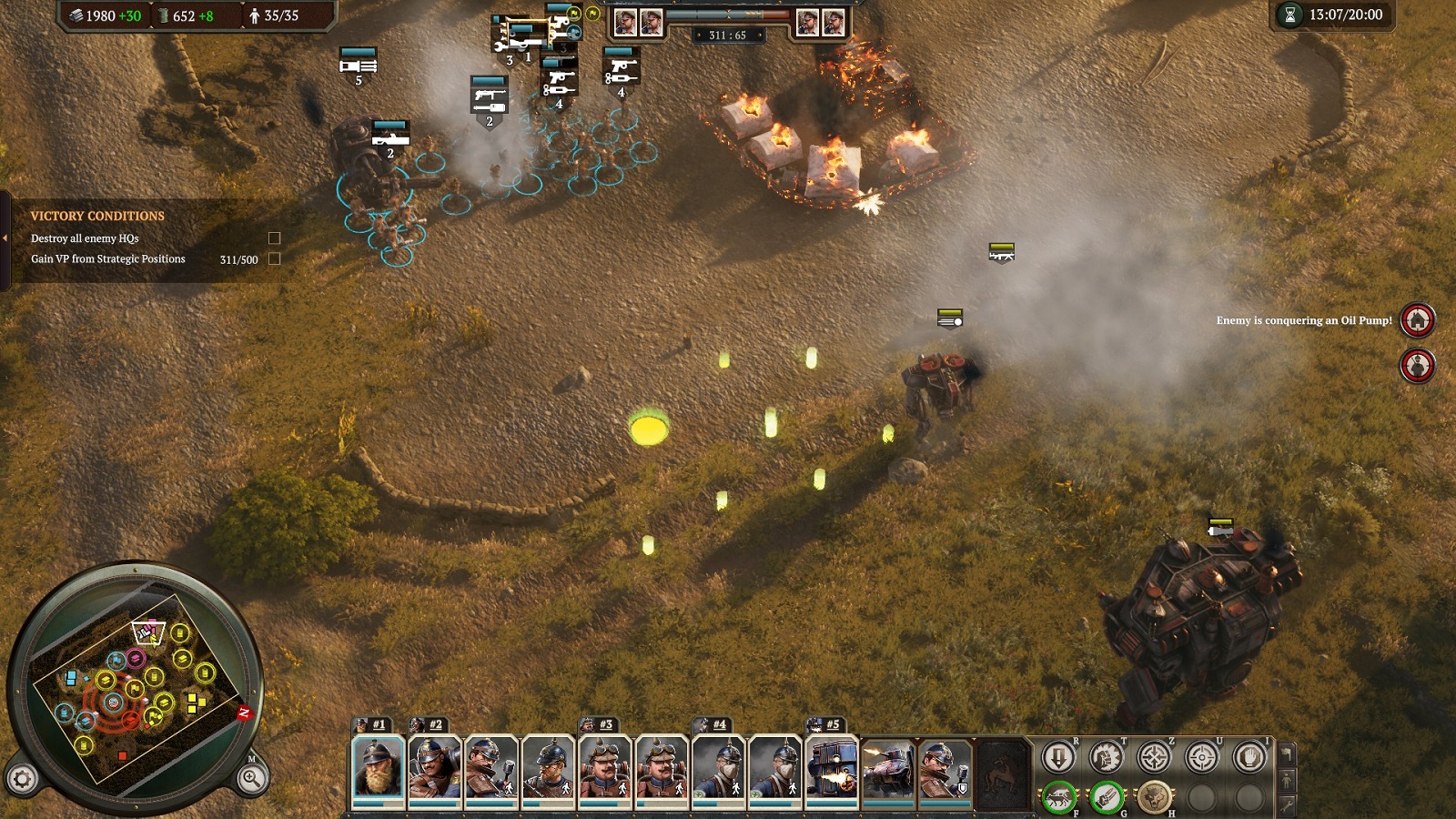 It’s all fun and games until the robots start revolting

The game is quite limited in its offerings outside of the campaigns. Challenge mode introduces three additional missions where players must defend their position from waves of attackers. Skirmish mode lets you practice with or against bots in 1v1, 2v2, and 3v3 matches before you dive into multiplayer. Multiplayer takes the mayhem online with regular and ranked play, with the same maps found in Skirmish. There are a total of six maps: three for 1v1, two for 2v2, and one for 3v3. There is also but a single multiplayer game mode, the traditional domination-style battle where players fight to capture and hold objectives, earning points for their teams.

RTS diehards will find a lot to love about Iron Harvest, but perhaps not in its multiplayer offerings. As it stands, the game could use more in the way of variety in its modes. Completing certain challenges and competing in multiplayer rewards players with cosmetics for their player cards, but this light progression won’t be enough to satiate the starving RTS community for long. It could greatly benefit a few additional multiplayer modes in the future.

Iron Harvest doesn’t reinvent the wheel — it doesn’t have to. Instead, the game is a celebration of the sub-genre’s tried-and-true design. It is a student of the greats that came before it, taking and presenting that core gameplay experience in a way that is familiar, but also exceptionally engaging. But beyond its single-player campaigns, its content is limited. Multiplayer is arguably where players hope to spend the bulk of their time, and presently, Iron Harvest’s selection of modes leaves a lot to be desired.

Iron Harvest doesn’t reinvent the wheel — it doesn’t have to. Instead, the game is a celebration of the sub-genre’s tried-and-true design. It is a student of the greats that came before it, taking and presenting that core gameplay experience in a way that is familiar, but also exceptionally engaging.

A self-deprecating, overly sarcastic pair of glasses that occasionally possesses a human host in order to partake in the delightful process of playing video games, then immediately complaining about them. When he is not playing games (a rare occurrence), he can be found either writing about things that no one cares about, or haunting the quiet streets of his Canadian suburb.
Related Articles: Iron Harvest
Share
Tweet
Share
Submit