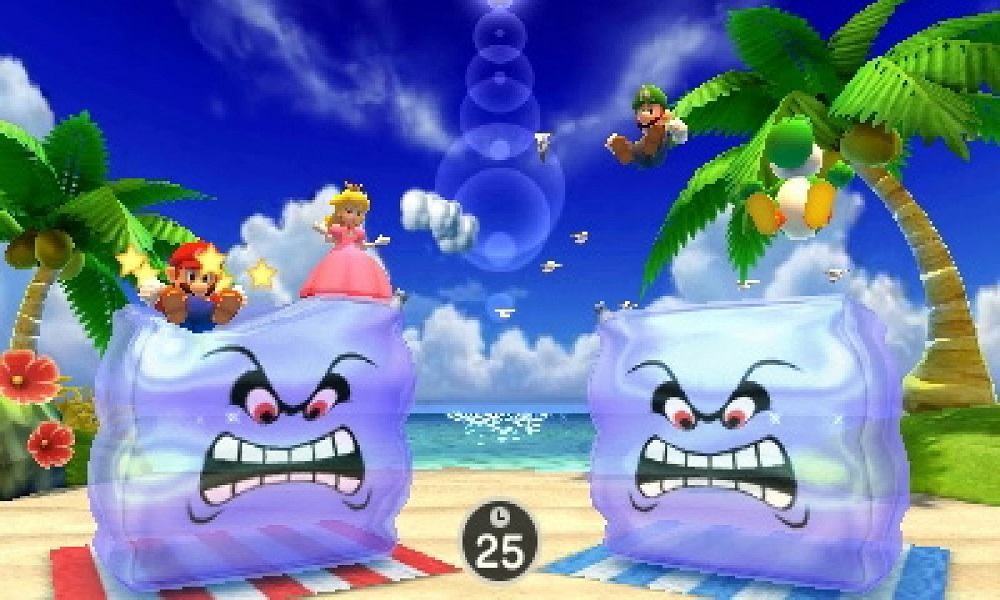 I’m something of a Mario Party apologist around my circle of friends: Even though I haven’t played the ninth console entry, I enjoy the car mechanics of Mario Party 10, and even accept Mario Party: Star Rush for the imperfect yet fun title it is. However, I consider Mario Party 3 my all-time favorite party title, and nothing’s better than the minigames. While I did have high hopes for a 3DS collection of 100 of the “best” minigames, Mario Party: The Top 100 is nothing more than a disappointing cash in from an aging franchise that relies more on nostalgia than great gameplay.

As the name implies, Mario Party: The Top 100 consists of one hundred minigames from the ten console entries of the franchise. The four-player party title tasks you and three friends (or AI) with various objectives, whether it be playing aquatic Simon Says in Shy Guy Says to The Beat Goes On, where you have to memorize drum beats lest you burn. They’re also divided into 4-player free-for-alls, 2v2 team games, 1v3 competitive games, and 1v1 duel games. If you only have one copy of the game, The Top 100 also has download play capabilities for up to four players, so you can get a party started with a single cartridge or digital download. I do appreciate Nintendo supporting this function, and I’d like to see download play utilized more into other games.

Minigames are always a highlight in every Mario Party, and even if an entry is disappointing, there are always at least a few that you’ll want to play through again and again. However, while you’d assume that this anthology would contain ten minigames from each console entry, in reality the later N64 and Gamecube entries are mostly here, with games like 1,9, and 10 only receiving a scant handful each. While most of the games are iconic (Bumper Balls and Face Lift are two examples), there are some glaring omissions that I would have appreciated (come on, no Running of the Bulb? That was a classic).

The prospect of remastered minigames is an ambitious one, and for the most part, a lot of the minigames are enjoyable and fun. While there aren’t any minigames from the handheld entries, the ones represented retain some of the charm of the originals. Vine with Me is one of my favorite minigames from 3 and is still frantic fun with a rival, and Bombs Away from 1 is still a frenzied free-for-all for four players. For other minigames that relied on controller gimmicks (mainly the Gamecube and Wii Mario Parties), the 3DS is used quite nicely. Balloon Busters from 7 uses the 3DS microphone to blow into a balloon, while At the Chomp Wash from 8 uses the touchscreen in lieu of Wiimote controls. These remastered minigames were few, but still showcased a lot of potential in The Top 100.

There are some duds in the package, however: whoever had the idea to include that Tug of War game (which was responsible for A LOT of broken N64 controllers back in the day) should get a stern talking-to. Additionally, there are some luck-based games included here that weren’t fun the first time; Deck Hands from 5 is literally just four players picking cards randomly to get the highest score. The only problem is that there’s no real way to actually win consistently. Some remastered versions of minigames were disappointing as well. While Bowser’s Big Blast was drawn out and dramatic when it first debuted, here it’s just muted and disappointing, with explosions occurring with nary a sound and the whole thing ending in seconds. Quite a few of these minigames are either lackluster or remastered to be disappointing. It doesn’t help that the ending jingles are replaced by the Mario Party 10 system of saving character celebrations to the end. It just feels a bit jarring to not have your character bragging that they won is all.

That being said, nearly half of the main mode is locked at the start, so you’ll need to take part in the minigame island in order to unlock the rest. Reminiscent of Mario Party 1’s minigame mode, you select a character from a roster of eight to play through four worlds of ninety-eight minigames, with two unlockable ones when you progress through the mode. You earn mini-stars and coins from completing the games, the latter of which will give you 1-up for every one hundred collected should you lose a minigame.

The minigame island is basically a glorified marathon of minigames played in single-player mode (which is odd, considering a decathlon minigame option is available from the get-go as well). The lives system feels a bit archaic as well, as they’re basically meaningless; losing all of them just causes a little inconvenience to you as you go back to the minigame you were on. Minigame AI is also a little inconsistent, as there are times in the normal mode where difficulty will shift randomly. (However, there’s a challenging unlockable mode for those that complete the minigame island which is consistently hard.)

For those that want a traditional Mario Party experience… prepare to be let down. There is a board game mode for players that want it, but unfortunately it borrows the mechanics from the slower boards of Mario Party Star Rush (the Balloon Bash ones), and to top it all off, only one board is offered. Players will have to try and obtain star balloons while grabbing items in spaces as well as triggering minigames with coin balloons. After a set number of turns, the player with the most stars will win. Players will move simultaneously during each turn, and a minigame will only occur if someone grabs a coin balloon. Instead of selecting a minigame at random, each player has a pre-selected pack of minigames from which they can choose, and whoever gets selected will play their minigame. Considering each pack only contains five minigames, the selection can get rather repetitive after a while, and I wouldn’t recommend any setting after twenty turns due to the generic design and rather uninspired board layout. Granted, you’ll probably get tired of it after one instance, so it’s better to just play minigames at your leisure.

All in all, this feels less like a celebration of the best minigames of Mario Party and more like a phoned-in package to dole out for the holidays late in the 3DS’s lifecycle. The presentation is basic, and while some remastered games are fun to play, most of the experience feels sanitized and sterile, lacking the boisterous flavor previous Mario Party titles had. One final point to note is that I had anticipated that The Top 100 would have equal representation of each of the ten main games (as in, ten minigames each), but it turns out that the game mostly comprises of the late N64 and early Gamecube entries, with the original Mario Party and the Wii/Wii U titles getting the shaft. This normally wouldn’t be a problem, but when you only get a handful of paltry minigames with a middling title, you’re bound to be disgruntled. Keep in mind that later entries had around 80 minigames a pop, so it’s kind of sad to realize that we’re getting barely more distractions than usual.

Mario Party: The Top 100 is sadly mediocre. What should be a wonderful commemoration of the friendship-breaking party experience turns into a bland rehash of different minigames from the series. While this is still fun with friends, it’s probably better to just grab an older Mario Party and dig in there.

Elisha Deogracias is an aspiring accountant by day, freelance writer by night. Before writing for Gaming Trend, he had a small gig on the now defunct Examiner. When not being a third wheel with his best friends on dates or yearning for some closure on Pushing Daisies, he's busy catching up on shonen manga and wacky rhythm games. Mains R.O.B. in Smash. Still doesn't know if he's a kid or a squid.
Related Articles: Mario Party: The Top 100
Share
Tweet
Share
Submit