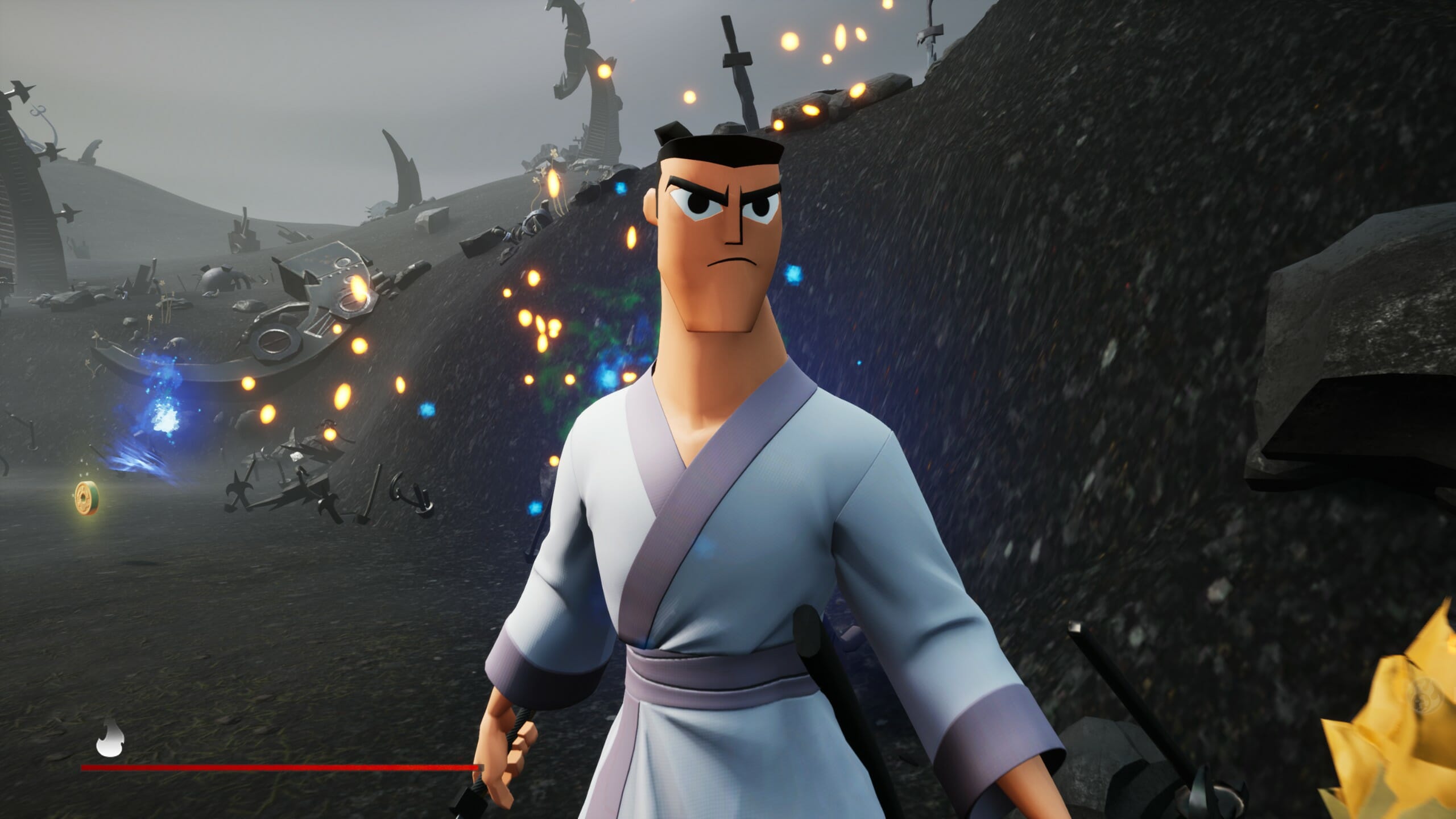 It’s hard to imagine the last time a Samurai Jack game released it was by way of the PlayStation 2 and Nintendo GameCube way back in 2004. Samurai Jack: The Shadow of Aku was met with an aggregate score on Metacritic on both systems at 59/100. This time, it seems that the developer Soleil for Samurai Jack: Battle Through Time have pulled out all the stops to improve where Adrenium Games and Amaze Entertainment left off nearly two decades ago.

Samurai Jack: Battle Through Time has you play as (you guessed it) Jack as you journey through a pocket in time; ultimately tying into the series finale. You’ll travel through different worlds that were showcased in the TV series, and fight familiar enemies. Jack works alongside various allies that have been revealed through the TV show, including the Scotsman, Da Samurai, and Ashi. While the Scotsman, Da Samurai, and every other ally besides Ashi, don’t serve that pivotal of storytelling role, they’re there to provide the occasional piece of advice and free resources that can be used in Jack’s adventure (unless it’s Da Samurai, who is the merchant in this game and has a limited inventory you can purchase gold with). These resources come in the form of either a weapon, ammunition, gold, a consumable, or a throwable item. Ashi, on the other hand, is there to guide Jack through the game and to keep him on the right path to find his way to Aku and eliminate him once and for all. You’ll also regularly switch from a 3D perspective to a 2D one, and have intense staredowns, as the game tries to capture the feeling of what the TV show did so well.

Yet, all in all, the story doesn’t provide that much substance to the overall game; it felt last-minute and thrown together. In playing this title, I didn’t feel that interested in anything other than the gameplay. While it’s a nice feature for long-time fans of the Samurai Jack series who may desire to have more of the story in their life, it doesn’t attempt to be ground-breaking — let alone enticing — and comes across rather disappointing.

However, where the storytelling fails, the gameplay succeeds. I really meant it when I wrote that Soleil has pulled out all the stops for this one because it’s as if they put all their eggs in one basket and utilised as many gameplay mechanics as they could. And that’s not a bad thing, if anything the gameplay was a refreshing change from what we might get in AAA titles nowadays since the player is given all the tools to support any type of playstyle they might like.

For melee weapons, Jack has access to his katana as well as hammers, spears, clubs, and even unarmed strikes. Each weapon has a different effect on the enemy. For example, a hammer is a lot faster at clearing out hordes of weak enemies, whereas a club deals heavier damage at the cost of speed. Switching weapons is easy, as you have a quick-access menu that’s available using the D-Pad on the controller or arrow keys on the keyboard, and you can use this feature to chain combos to deal even more damage. End all of it off with a Kiai Attack to quickly deal high damage and you’re godlike.

The amount of weapons is fantastic, however as with nearly every game using this feature: with more weapons comes durability. Probably my most hated mechanic. To repair your weapons, you can utilise Da Samurai and pay a certain gold fee. This fee depends on the total durability remaining, and the kind of weapon that it is. It’s not possible to increase the total durability by improving your skills, which means you’ll be spending some time perusing Da Samurai’s inventory. It’s important to note, however, that the only weapon that has unlimited durability is Jack’s katana. While this makes sense given that in the show the sword was forged by deities Odin, Ra, and Vishnu and is unbreakable, it makes little sense to use anything other than the katana in this game. I can safely say that I only used one other weapon through the game, and that was the morning star when I faced the giant stone golems. If you’re gonna add durability to the game, you might as well have it active on every single weapon to prevent gameplay imbalances. And it’s not like I struggled against the enemies in being limited to only one weapon — once you’ve got the combos down pat, and you utilise dodging and blocking, you’re a force to be reckoned with. Of course, choosing that path, or determining your own playstyle, is up to the player’s discretion — and with the number of options available, there’s no drawback either way you go.

In terms of ranged weapons, you have access to bows, handguns, and machine guns. These are very helpful to take out hordes of low-health enemies that may spawn in the combat, as well as dealing chip damage to bosses, keeping enemies at a distance, and resetting attack animations on all enemies. Ranged weapons are very powerful in the right context, and should be saved for moments when things get a little rough and you need to even the playing field. Weapons like the bow can shoot an explosive arrow to deal a small area-of-effect damage, while the machine gun can be used to keep your enemies at a distance. Of course, you have a limited amount of ammunition, so don’t go thinking you can use it sparingly, but it can be replenished when you find Da Samurai. It’s the same deal with the throwable weapons. Jack has access to items like a kaiken, shuriken, and explosives, but these are in short supply and should be used in the same way as ranged weapons are. 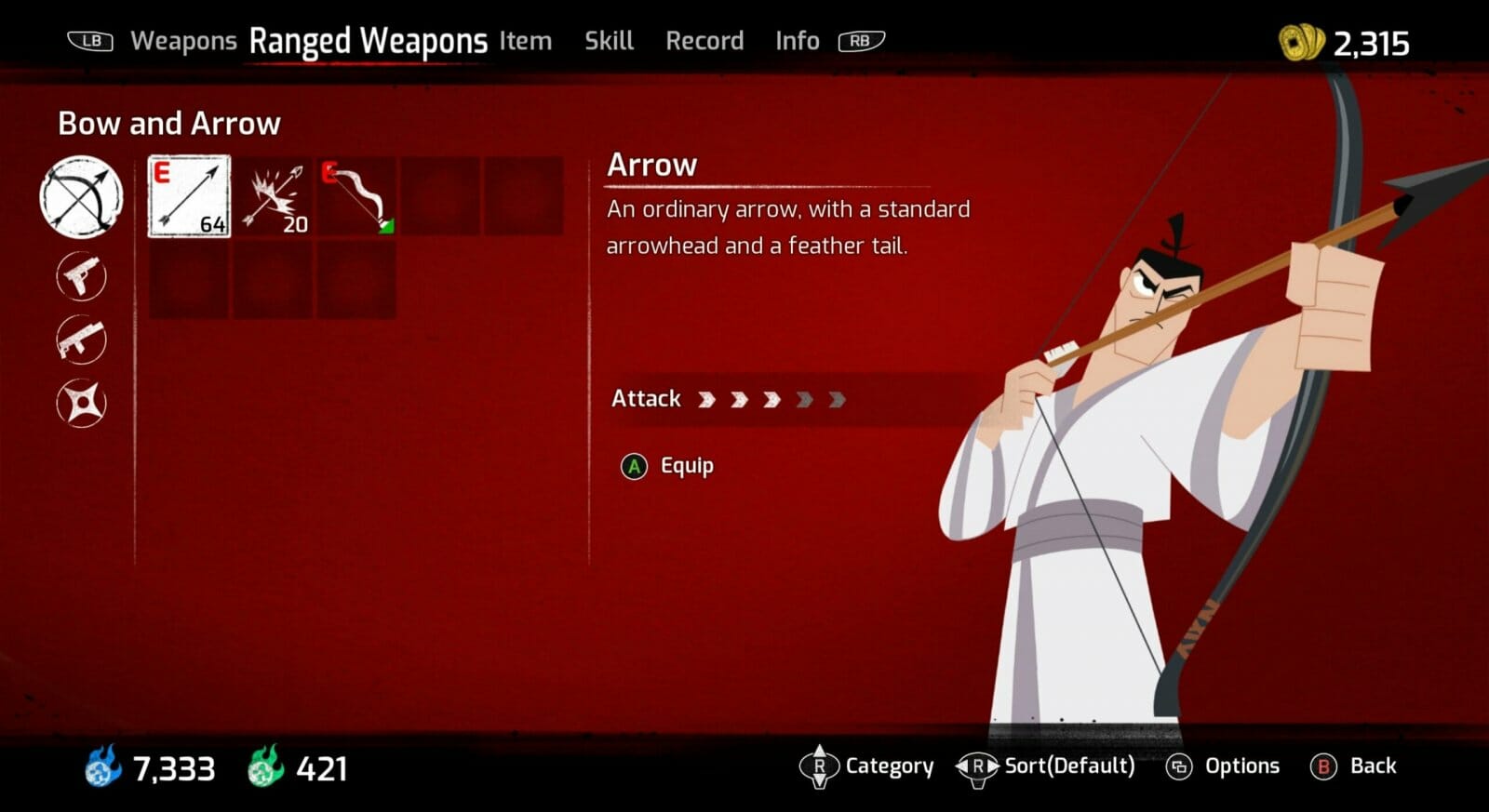 Just a handful of weapons/ammunition to use in Samurai Jack: Battle Through Time

I won’t go into much detail on the skills available, because there are a lot and half the fun is discovering and unlocking them yourself, but they are categorised as Spiritual, Physical, and Combat. Spiritual skills allow you to improve things like sword damage, the amount of Kiai Attack capacity, your inventory, and basically things that provide quality-of-life changes for Jack. Physical skills improve your health, the damage of certain weapons, and reduces incoming damage. Lastly, Combat skills improve the types of combos and counters you can utilise. Combat skills work in tandem with the level of each weapon, which can be improved by spending gold to train with Da Samurai. Do beware; it’s seriously easy to min-max in Battle Through Time, especially if you solely improve Spiritual skills to provide increased sword damage and Physical skills to utilise higher resistances to enemy damage. 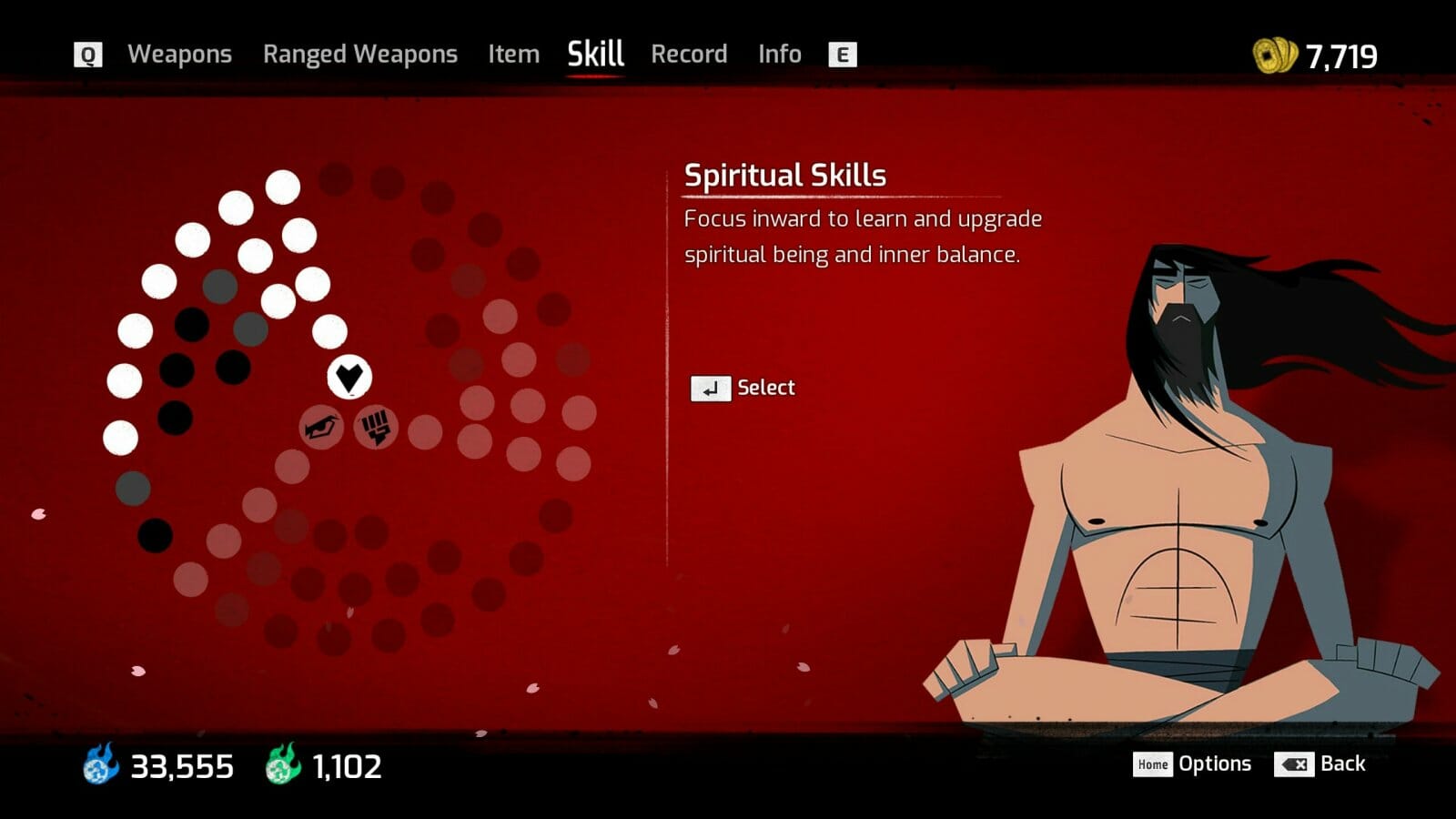 The skills tree menu in focus

Although well-designed, and boasting interesting landscapes, there’s only a total of nine stages within the campaign. Each one is uniquely designed, such as a setting in Aku City, one in a cemetery, and another in a bombed city. However, the biggest issue was that the levels didn’t pose much of an overall challenge to slow down the gameplay and spread the playtime out. Sure, there’s boss battles, huge 30-on-1 battles, and everything in between, but it doesn’t take long to become well acquainted with the game and wreck everything in your path. And in doing so, the game doesn’t take very long to finish. In fact, the game recorded that I completed it in under 5 hours, with the fastest level being completed in 16 minutes and 48 seconds. At that kind of time-to-complete, you’d be thinking I was practising speedrunning this title. Thankfully, the campaign isn’t the only thing to do after the game. Once completed, you’ll have access to a variety of missions. These missions are: Free Missions, where your task is to kill all the enemies with a set ranged and melee weapon; Boss Missions, where you’re tasked to kill all the bosses, with the same fighting principles set in the Free Missions; and Endless, which is exactly as you’d imagine but can only be unlocked when all the stages are completed on Master Samurai difficulty.

In terms of difficulty, it’s pretty damn easy. Although I did play on the medium difficulty that was available at the time (there’s a total of four — Master Samurai has to be unlocked), I felt more like I was playing a much lower difficulty. I stayed with this difficulty thinking that the game would progressively get harder, but I was sort of proven wrong. Sure, there are more difficult enemies to come across, but utilising combos and dodging is still just as powerful late-game as it is early-game. In fact, the final, and hardest, boss fight of the game only took me three retries. 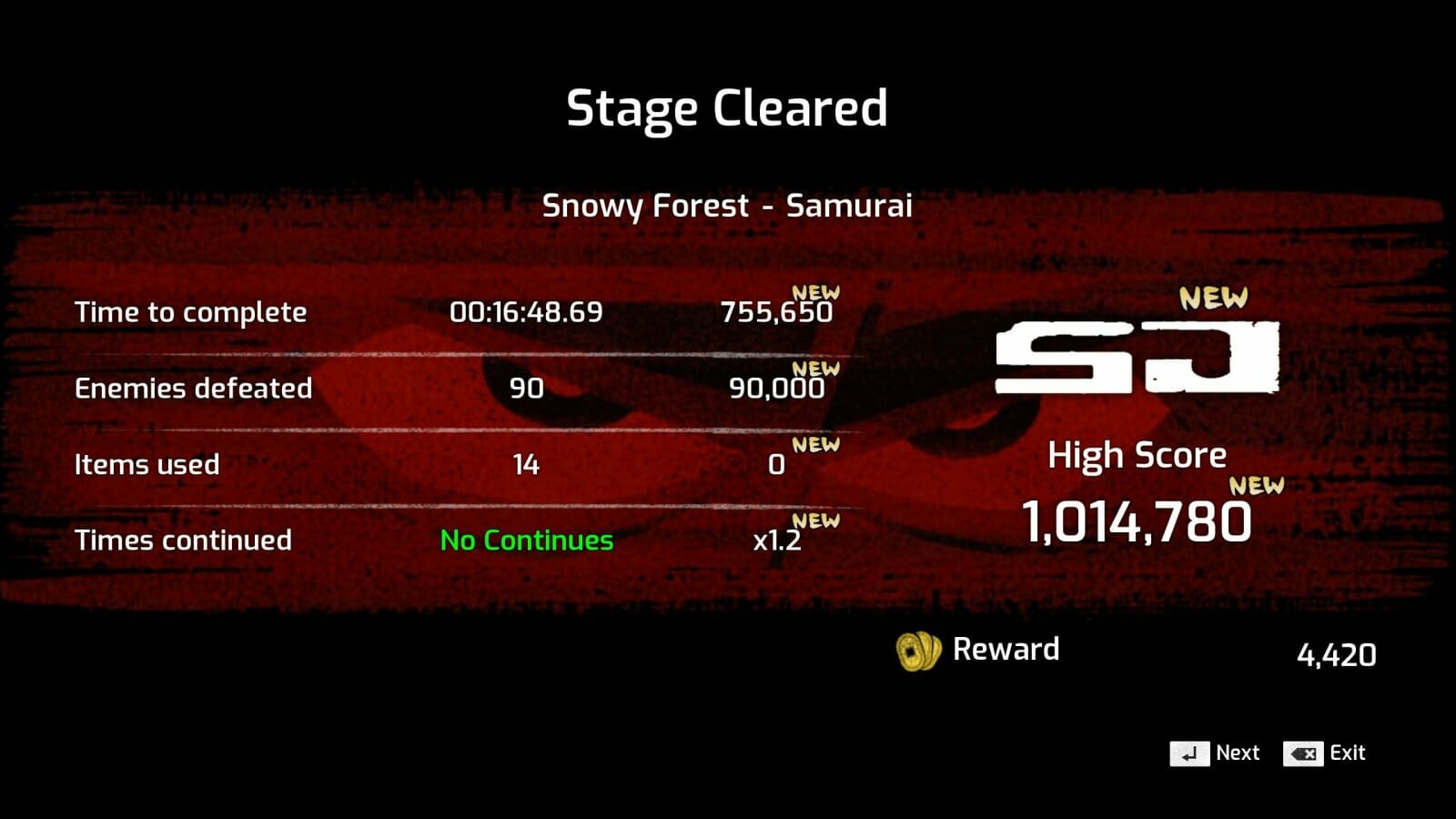 In terms of bugs and glitches, this game is pretty polished. I did have an issue with the frame rate, which couldn’t ever get above 70 FPS. I take this down to an optimisation issue since the game isn’t running an insanely high polygon count by any regard — it’s literally a 3D version of 2D animation. I also had my frame rate drop when a smoke plume was on the screen, which dropped it down to about 25 FPS. Again, I think this game could undergo some more time in the optimisation oven.

Samurai Jack: Battle Through Time is a great game, but I could be a lot better. I think a few more weeks spent playtesting and optimising could improve the game, but what it does it does well. It’s refreshing to see a game give you the tools to shape your own playstyle, rather than hammering you into a specific route, which makes the gameplay seriously enjoyable. I only wish the game posed a higher challenge and was a lot longer, but in someone’s eyes that may prove beneficial for this title and set it as an easy-to-grasp, pick-up-and-play game.

Although Samurai Jack: Battle Through Time has the occasional frame rate drop, and it doesn’t pose that high a challenge, Soleil’s game direction has proved worthwhile. Having all the tools to shape your experience provides a thoroughly enjoyable experience for the player, and it’ll keep long-time fans of the series happy seeing Jack’s old allies in action once more. However, with such a short time-to-complete and weak story, it will have you yearn for more.

With a deep interest in writing, Ben followed that into a Journalism degree. As an avid lover for gaming, he is constantly expanding his library with console, PC, and VR games. He's obsessed with stealth games and loves hunting down the smallest of details inserted by devs.
Related Articles: Samurai Jack: Battle Through Time
Share
Tweet
Share
Submit