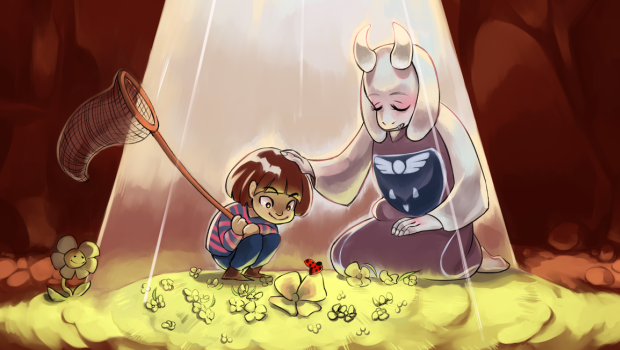 “Spiritual successor” is a fickle term. It denotes that a work is not part of an established canon, but cannot exist without that established effort preceding it. Undertale is a spiritual successor of many games – Earthbound, Chrono Trigger, even drawing inspiration from more modern indies like Cave Story.

Yet Undertale manages to stand on its own despite those games, and create something that will feel inherently nostalgic, soothing, and sentimental, regardless of your prior experience. There’s a childlike innocence to this game, one that you only see when you strip away the dressings and standards of modern blueprints and let your imagination run wild.

Undertale is one of the most unique games I’ve played in a long time, and is worth every iota of your attention.

The opening is reminiscent of classic RPGs and adventure games.

Starting off with a chippy 8-bit tune and beautiful art, the exposition is quick and simple. Long ago, monsters and humans waged war. The humans won, and the monsters were banished to the Underground, with a barrier raised to prevent them ever breaching through to the surface again. One day, you (the player character) are walking up a mountain, one that no one has ever returned from. You trip, fall down a hole, and land smack-dab in the Underground.

It’s from here that you begin to learn the mechanics that define the themes of Undertale. As you traverse the Underground, searching for a way home, you’ll encounter many monsters. Some are friendly, others will attempt to kill you, but you have a choice with each encounter – you never have to kill anyone. Any and every encounter can be free of bloodshed, as long as you’re willing to turn the other cheek and sympathize with your attacker.

Sometimes, you should answer violence with seductive wiggling.

You can spare them and save their lives, or kill them to gain EXP and raise your LOVE level. It’s your choice, and developer Toby Fox has done a good job in making sure each encounter feels unique and different. Monsters have their own quirks and troubles to overcome, not to mention the bosses, whose “passive” strategies require careful and methodical play to beat.

Exploration is classic RPG fare, where you walk around in an overworld and talk to people, solving a variety of puzzles (some of which are pretty great). Where Undertale subverts the standard is in the combat, an odd mix of turn-based combat and bullet-hell projectile dodging. Enemy attacks come at you in a box, where you must maneuver your SOUL (represented by a small heart) to dodge attacks.

Over time, color-coded attacks begin to change up fights; blue attacks won’t damage you if you keep your heart still, but orange attacks will only miss you if you move through them. Fights gradually introduce, expand on, and then subvert mechanics in a way that feels natural and rewarding. It rarely explicitly tells you certain things, like if certain attacks will change direction halfway through, or if eating a certain item in front of an enemy will lower their defenses temporarily, but it rewards you for thinking (sometimes literally) outside the box.

Dodging horse biceps is only the tip of the iceberg.

A lot of Undertale’s brilliance shines in the moments where it subverts and twists your expectations. This is where we run into the Reviewer’s Dilemma: spoiling the many ways that Undertale messes with you, from the first five minutes to the final, breathtaking, heart-wrenching moments that lead to its conclusion. I could tell you that you can date a skeleton, but it wouldn’t be nearly as interesting without the context of who that skeleton is. You could read on a Wiki or see on a YouTube video that certain characters are referenced throughout the story, that certain aesthetic choices and musical selections created a moment where I had to get up, walk away from the computer, and do anything that would alleviate some of the emotional weight I felt on my chest, but the impact is lost if you’re not the one clicking “play.”

It isn’t a sleight at all, but rather a testament to the amount of character, charm, and emotion packed into this concise title. The average run time of your first playthrough Undertale will run about five to six hours, short by today’s titanic standards, yet I’ve rarely seen pacing handled so well in a game. Undertale knows when to hit the gas and when to let off. Each segment is challenging without being frustrating, impactful moments are allowed their time to breathe, and tension is permitted to build, slowly twisting the knife rather than just giving a one-off plot twist as a “gotcha!” moment. This is a game that can hit ridiculous highs, like turning a boss fight into a quiz show or musical, and still give you the time to reflect on a difficult choice you just made while walking through a long hallway.

Note: no caption was deemed necessary for this sequence of pictures.

The soundtrack to Undertale reinforces those earth-shattering moments, knowing just when to rise and fall, and the frequent use of melodies and themes subconsciously manipulates your heart throughout the whole experience. Each song is reminiscent of a time when melodies had to be simple yet discernible, and each piece finds a way to grow outside the realm of chiptunes without losing that simplicity. I was surprised that after beating the game, I found myself navigating to the Steam store to buy the soundtrack, something I rarely ever do.

Undertale manages to grow from simple fairy-tale to a sprawling odyssey, yet it manages to retain a personal manner the whole time. The cast is small yet memorable, the combat is inventive and clever, and there’s so much to delve into. Beyond your first playthrough, there are fans delving into all kinds of secrets, finding different endings and changes and entire pieces of lore that are only found in “true” routes. This is really an incredible RPG, not for reinventing the genre or massive production values, but by simply telling a story and telling it impeccably well. Undertale is a labor of love project, quietly released on Steam, asking only a handful of hours compared to the exhaustive breadth of content recent games have produced, yet it stands as one of the most fascinating experiences of the year.

Undertale is one of the most unique efforts seen in indie gaming. Combining a love for the old with a willingness to innovate and utilize game mechanics to express ideas, rather than a binary input-output, this game should be on any and every one’s radar.