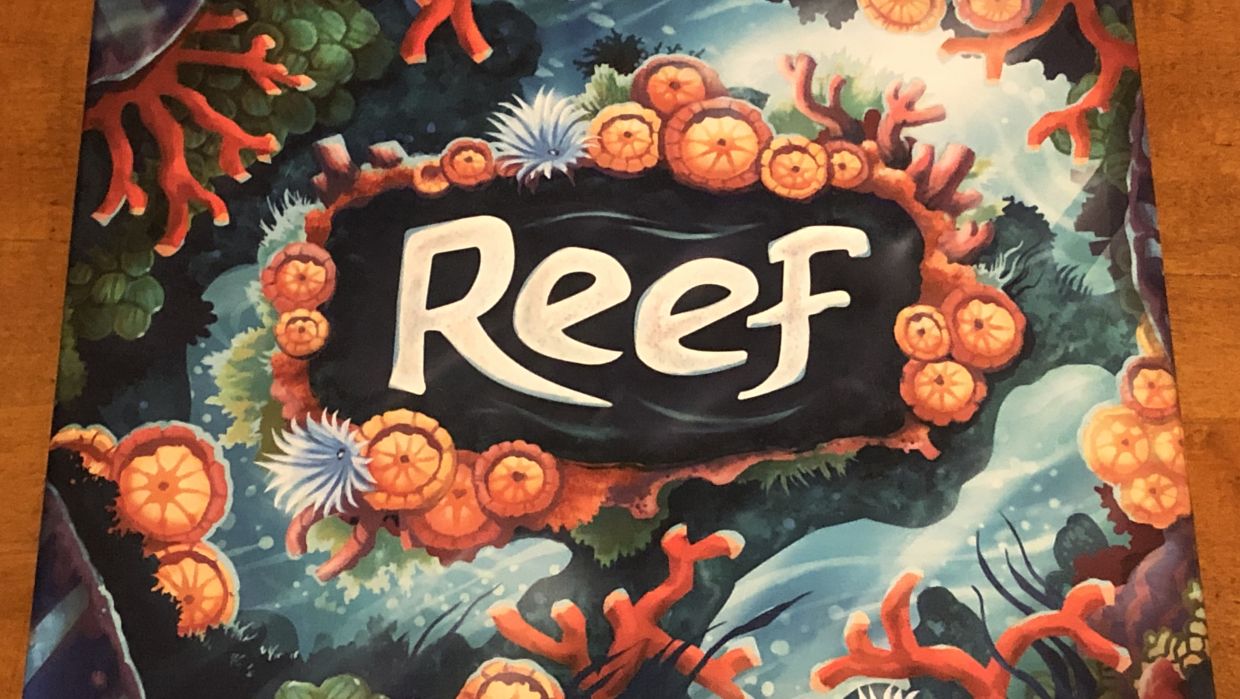 Sometimes a game doesn’t need to have complicated rules to be great. Ticket to Ride gives players three choices each turn. Carcassonne makes players lay a tile down and put down a figure if they like. Love Letter has players take a card and then lay one of their two cards in front of them. Reef from designer Emerson Matsuuchi looks simplistic and random at first glance. After playing it, it’s easy to see the depth that lies in its simplicity.

The components for Reef are simple. The coral pieces come in four colors: yellow, green, orange, and purple. The plastic pieces feel solid in the hand, and the rings on the top and bottom allow them to stack. A number of each color depending on the player count are placed on the table. Each player gets a player board, which is essentially a four by four square grid. One of them has a starfish to indicate the first player. Each player takes one coral piece of each color and point tokens are used to keep score, with the different denominations coming in different shapes, with each player getting three points at the start. Finally, each player gets two cards with the rest making a face up deck. Three cards from the top are laid to the side of the deck, making it so four cards are visible. 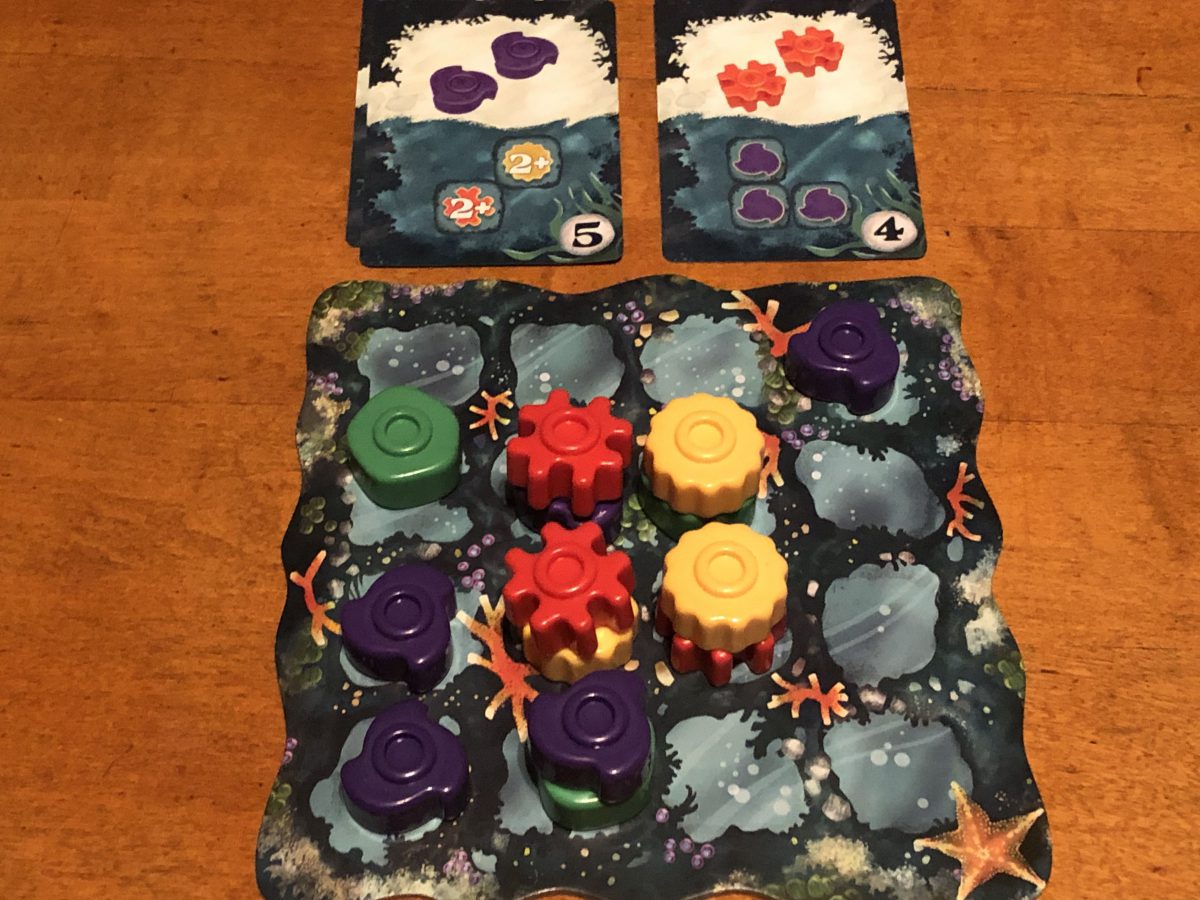 During each turn the player can either choose a card or play a card from your hand. The cards show coral pieces on the top and point scoring on the bottom. When you select a card, if you choose one of the three along the side of the deck you take that card and place the top card from the deck in its place. If you take the card on the top of the deck, you need to place a point token on the card with the lowest printed point value. If you have four cards in your hand, you must play a card.

When you play a card, you first play the coral pieces on the top portion. The two pieces are taken from the supply. Each piece can be placed on any blank space or on top of any piece as long as the resulting stack isn’t taller than four pieces. Once the coral pieces are placed, the pattern at the bottom of the card is scored. Looking at the board from overhead, you score for each time the pattern shows up without being overlapped. This means that a straight line of four coral pieces will not score twice for a pattern of three of that color, just once. Patterns range from looking for a group of the same color in a particular shape to looking for colors at a specific height. The more difficult it is to create the pattern, the more points it will score. 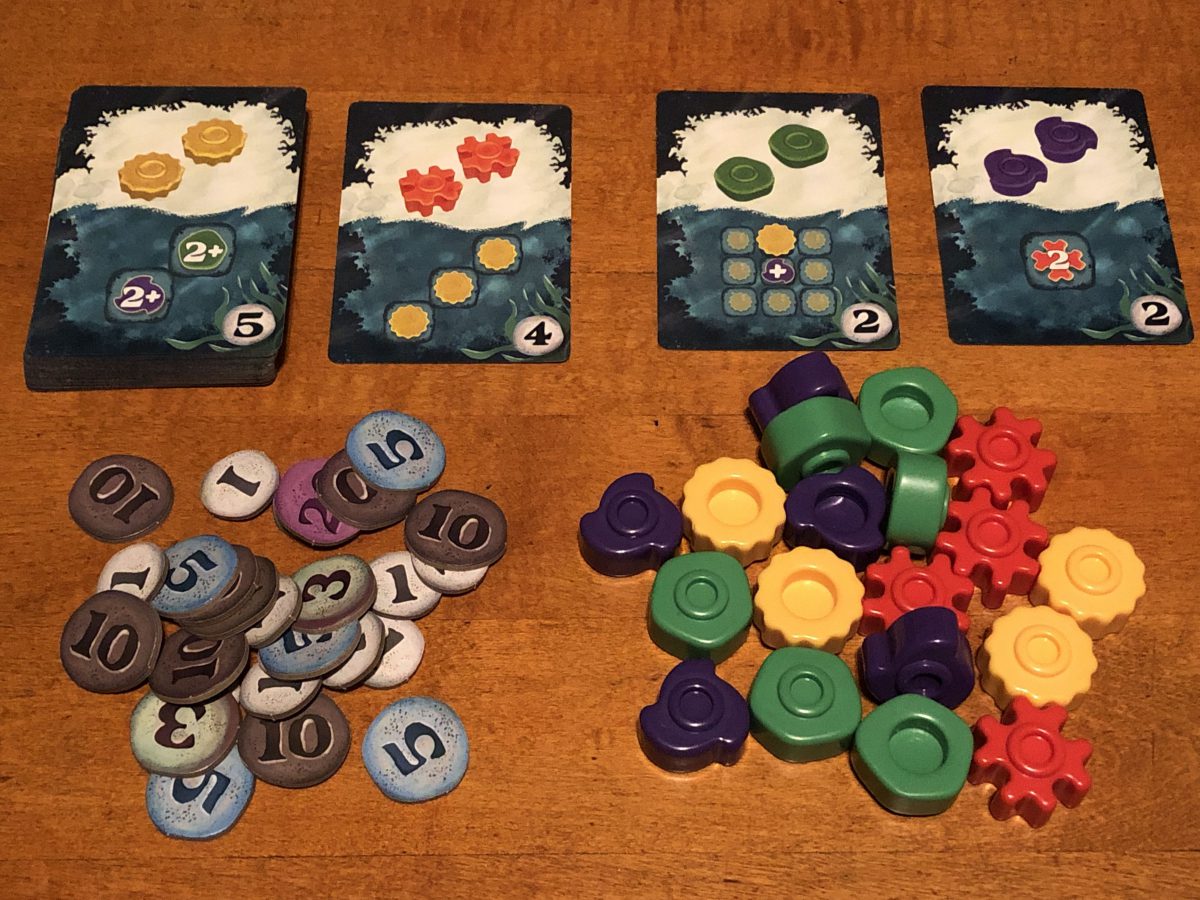 At first glance, Reef looks easy and a bit boring, but it ends up being a light game with interesting decisions due to the design of the cards and how they score. As you play, some combos can be made. You’ll see that you can score a pattern, and then by using those pieces you can score another pattern. When you discover them, you can see the thought that was put into the cards.

Reef has all of the makings of a gateway game: simple rules, colorful pieces, and a relatively short play time. While some gamers may scoff at how light it is, it’s a game I would bring out for family or friends who are getting together. Next Move Games and Emerson Matsuuchi have another hit on their hands.

While not working as a Database Administrator, Keith Schleicher has been associated with Gaming Trend since 2003. While his love of video games started with the Telestar Alpha (a pong console with four different games), he trule started playing video games when he received the ill-fated TI-99/4A. While the Speech Synthesizer seemed to be the height of gaming, eventually a 286 AT computer running at 8/12 Hz and a CGA monitor would be his outlet for a while. Eventually he’d graduate to 386, 486, Pentium, and Athlon systems, building some of those systems while doing some hardware reviews and attending Comdex. With the release of the Dreamcast that started his conversion to the console world. Since then he has acquired an NES, SNES, PS2, PS3, PSP, GBA-SP, DS, Xbox, Xbox 360, Gamecube, and Wii. While not playing video games he enjoys bowling, reading, playing board games, listening to music, and watching movies and TV. He originally hails from Wisconsin but is now living in Michigan with his wife and son.
Related Articles: Reef, Tabletop
Share
Tweet
Share
Submit