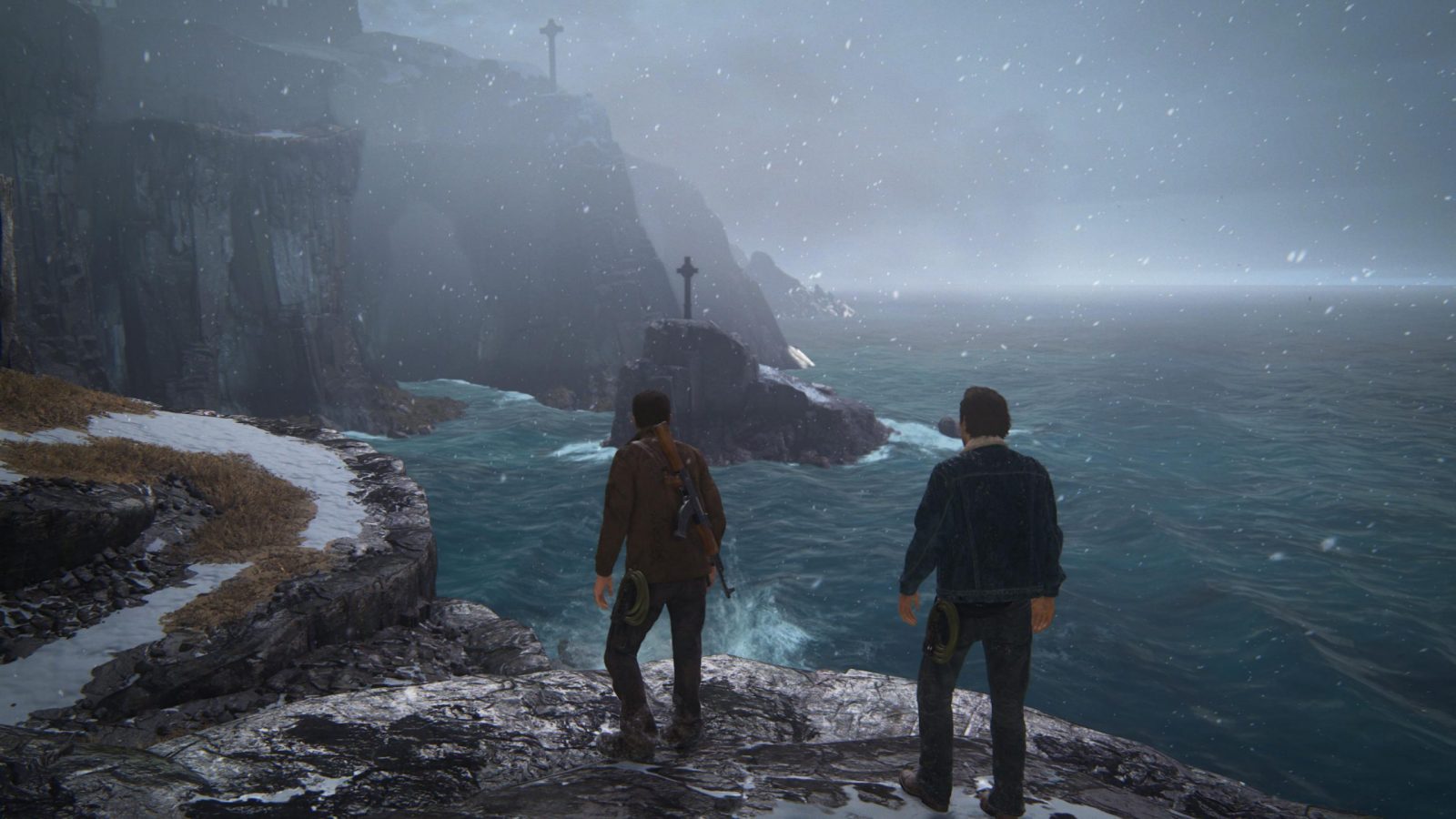 Naughty Dog are masters of using the video game medium to tell a story, and they have been for years. Through their games they create flawed yet believable characters, a slew of emotional setpieces, gorgeously realized worlds where the levels feel natural and lived in, and top all that off with best-in-class voice acting. The Uncharted series is their crown achievement – a modern-day Indiana Jones story that allows players to experience the thrill of treasure hunting in ways film never could.

Unfortunately, the Nathan Drake led Uncharted series seemingly ended with Uncharted 4: A Thief’s End, and although the later Lost Legacy standalone expansion gave fan favorite Chole her own adventure, a proper sequel has never been released. While there still hasn’t been any news about continuing the series, Sony has been kind enough to release the breathtaking Uncharted: Legacy of Thieves collection which brings both titles together into one slick package.

While neither title included in this collection is that old, with Uncharted 4 having released in 2015, the Legacy of Thieves Collection instantly proves its worth by taking what were already some of the best-looking titles in PlayStation’s arsenal and updating them to look like bona-fide PS5 releases. Featuring multiple graphical options, including HDR, a Performance Mode which balances resolution and frame rate to target 60 fps, a Performance+ Mode which favors framerate over resolution to target 120 fps, and a Fidelity Mode which favors resolution over framerate to target 30fps, the Legacy of Thieves collection has settings for even the pickiest of gamers. 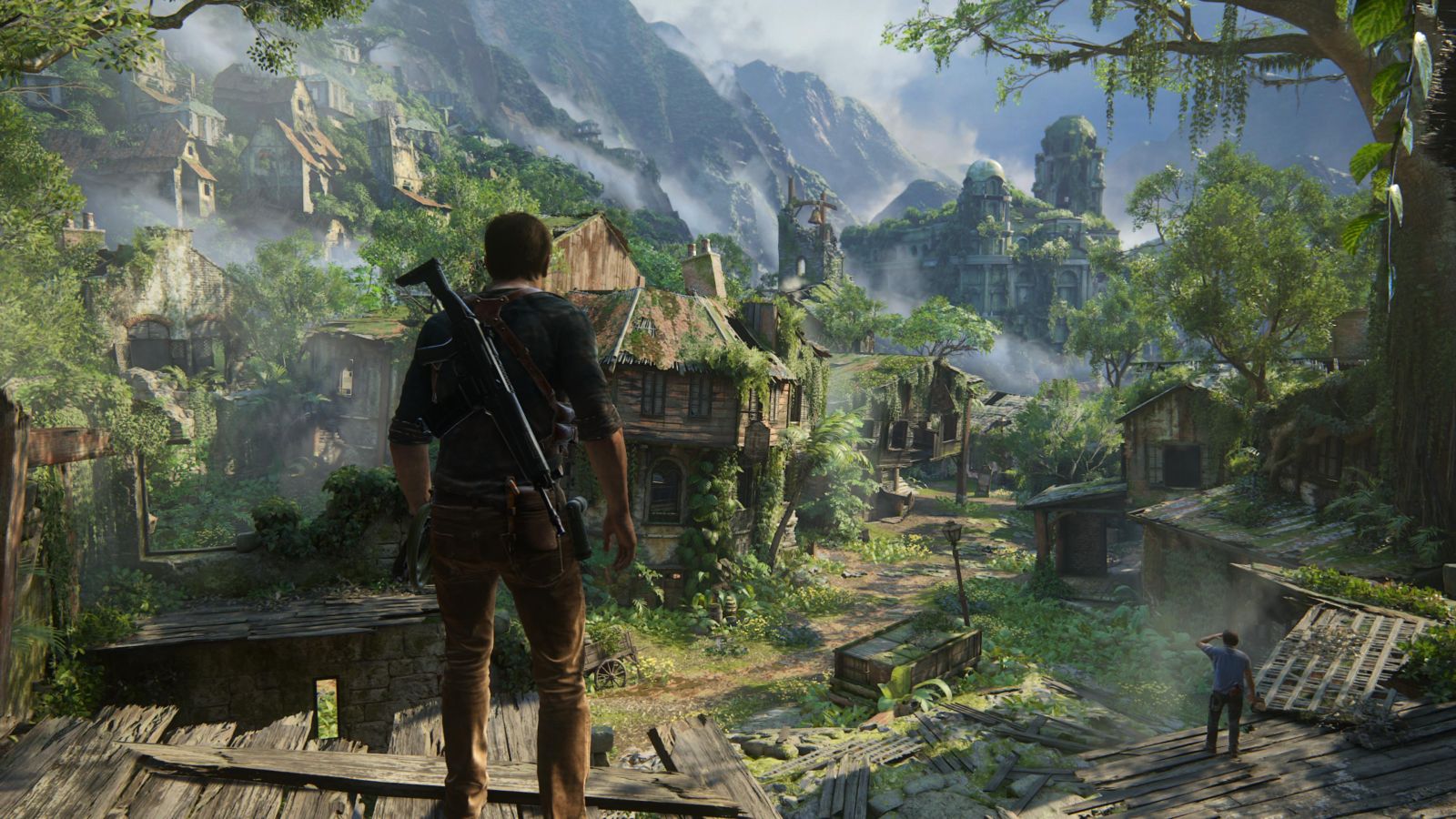 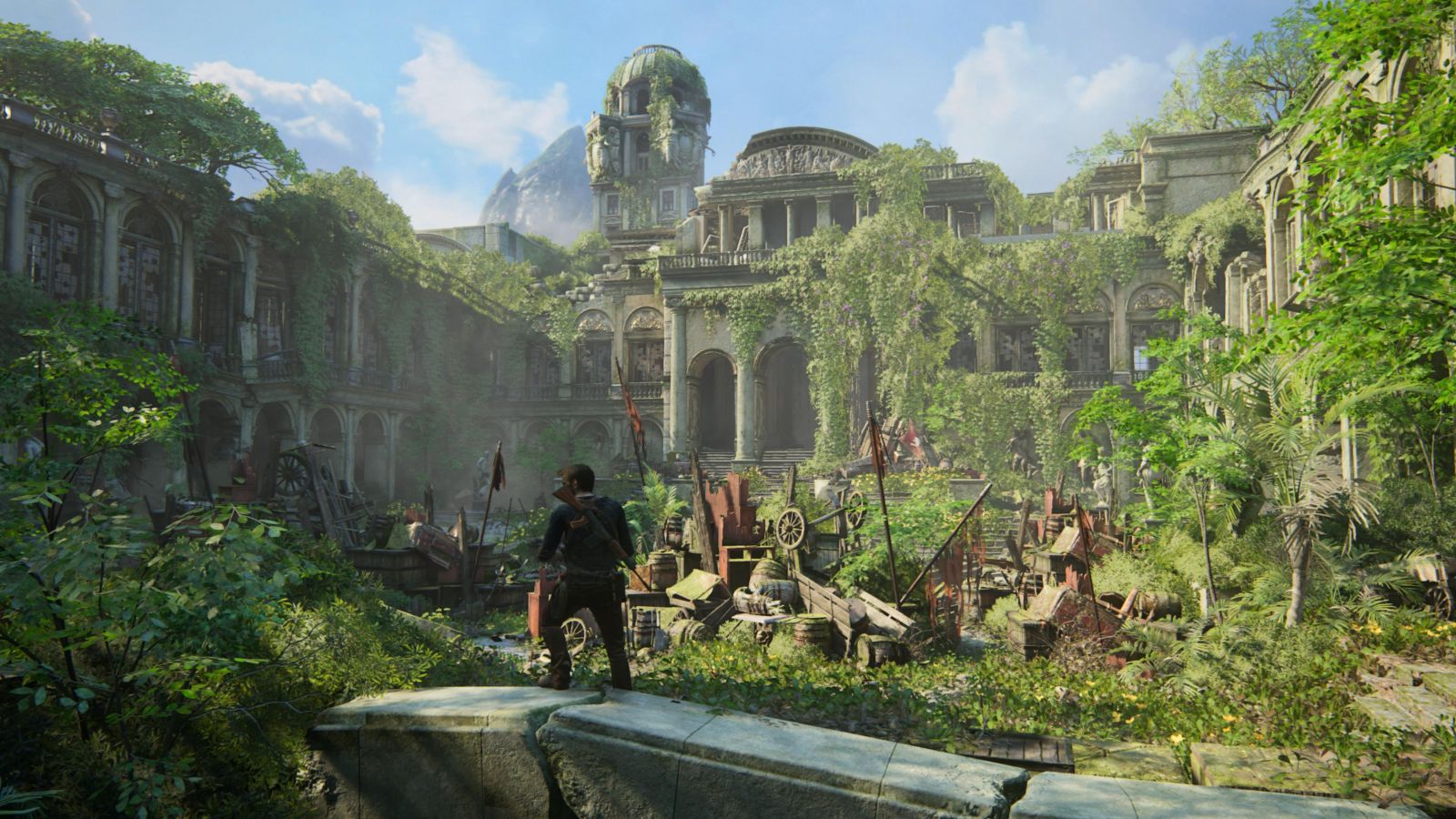 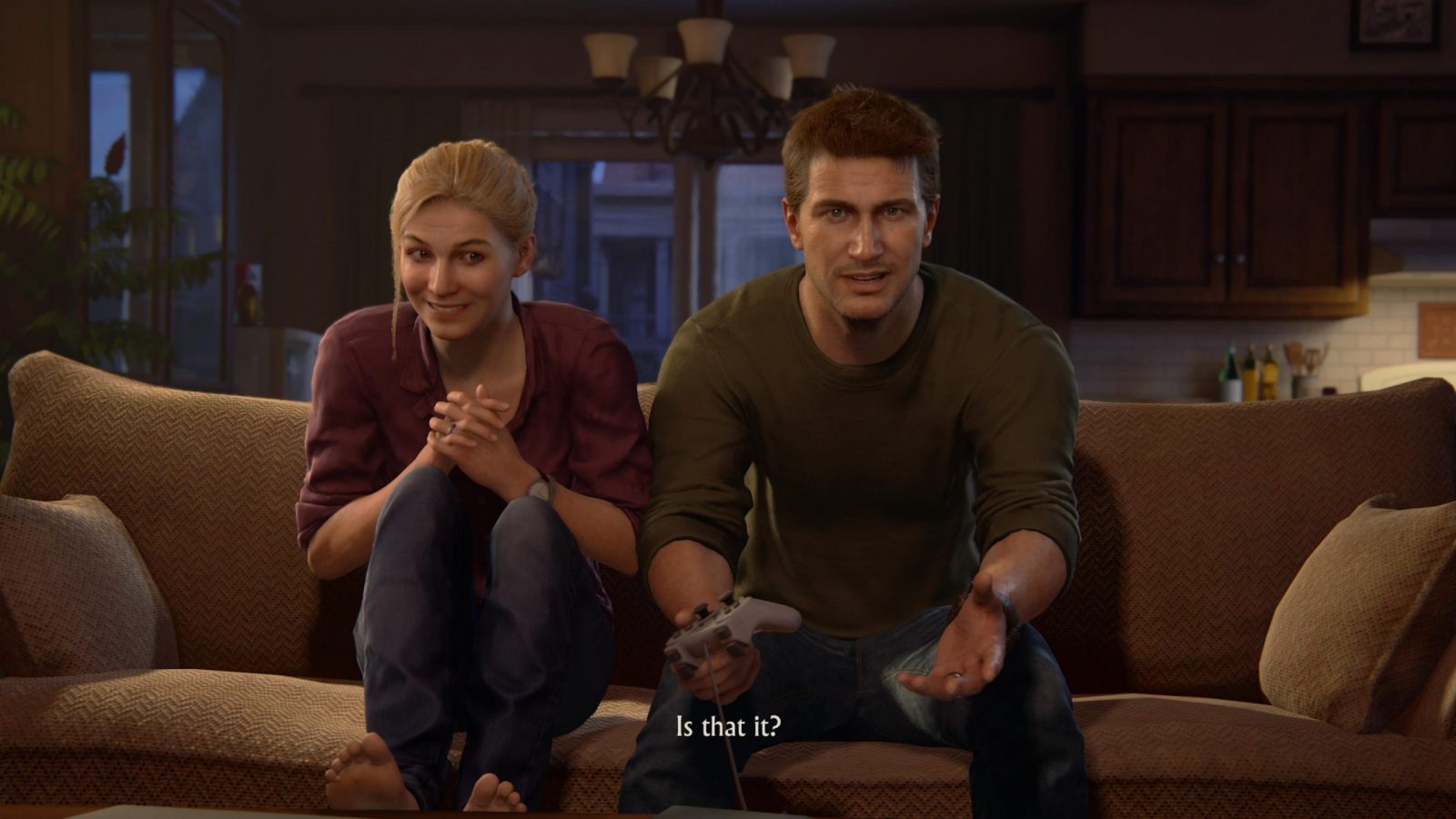 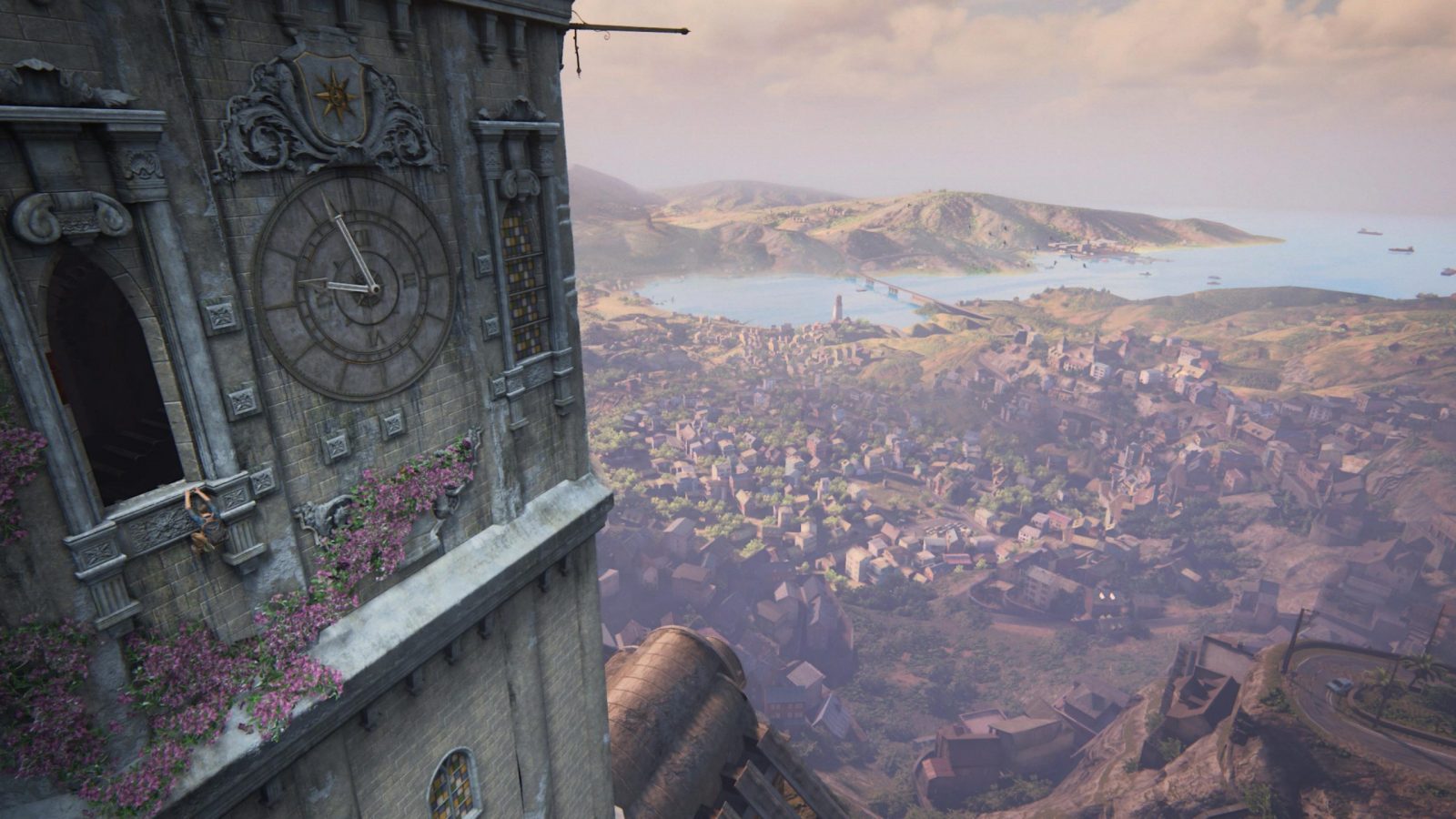 There’s little need to review either title included here as they are well known to be some of the highest rated titles in PlayStation 4’s catalog, but I will say that playing through each title again after a few years brought me a new respect for the story Naughty Dog was telling. Nathan Drake’s story is one of growing up and choosing to live for more than yourself, about learning how to put family first and be content to leave the past in the past, rather than hang on to your glory days at the risk of losing what you have. A Thief’s End is full of masterclass performances which bring every nuance of Nathan’s journey to vivid life. You learn to care for these characters, and you want them to make the right choices, all the while understanding why it is so hard to learn to let go. Elena, as Nathan’s wife, is one of the most well written female characters in gaming – both smart and capable, a woman who understands what drives Nathan but also isn’t afraid to leave him behind if he refuses to grow. The older I get, the more I resonate with the themes in A Thief’s End, and I was blown away by the emotion a game can contain while still providing incredible action sequences. Uncharted 4 most likely contains the least amount of full-on action scenes in the series, but I have personally always enjoyed my time exploring the incredibly detailed worlds far more than any shootout.

Lost Legacy, on the other hand, finally gives Chloe time to shine after being relegated to a side character/potential love interest in previous entries. Lost Legacy, despite being only a six-hour long adventure, manages to flesh out Chloe exquisitely, giving players reason to care about her, understand her motivations, and finally learn a bit about her backstory. Lost Legacy also manages to tie in nicely to the events of A Thief’s End, without players needing to have played that title to enjoy the adventure. The fact that Lost Legacy thrives without the inclusion of Nathan Drake proves that the Uncharted series is more than just one person – rather it is a fantastic, cohesive, treasure hunting world full of incredible lore, over the top villains, and hidden cities to explore that is ripe for further gaming entries.

The main reason to purchase the Uncharted: Legacy of Thieves collection is for the quality of the remasters. So, are they worth it? In a word, yes. But that doesn’t accurately sum up just how masterful these remasters are. Sure, it helps that the backbone of each game was already top-of-class on the PlayStation 4, but the second I loaded up A Thief’s End, and again later when I dove into Lost Legacy, I was absolutely floored with the quality. Both titles look and play like native PlayStation 5 titles, easily putting to shame nearly all other releases on the console thus far. The superb facial and character animations, the impeccable use of lighting as it shines through a lush forest or reflects off the mist of a waterfall creating a rainbow, and the subtle details such as the way mud, dirt, and water cling to the player as they progress through the magnificently realized world, are all miles ahead of most other games. The true star of the show, however, is the environments, and whew boy, do they look amazing. 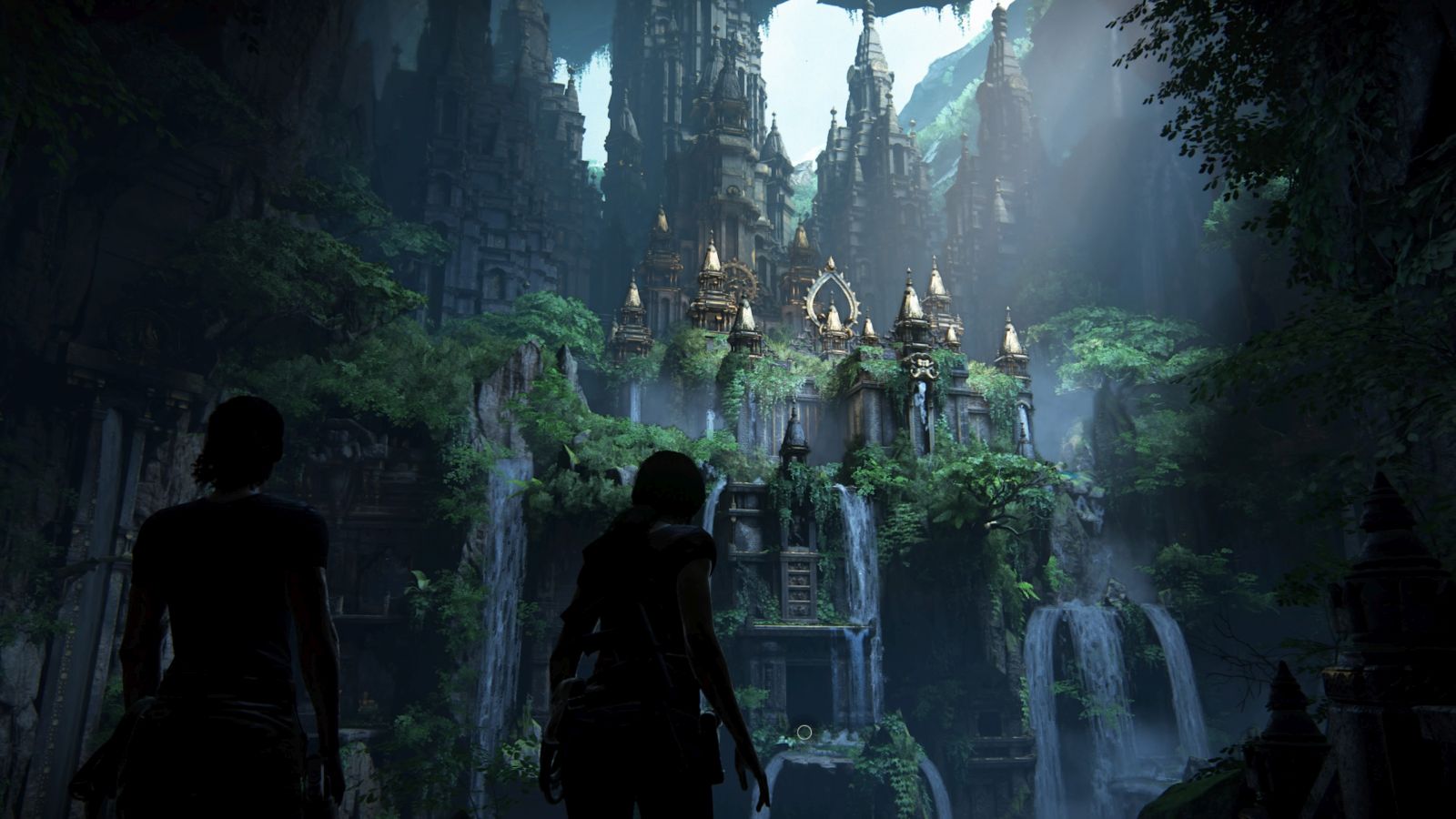 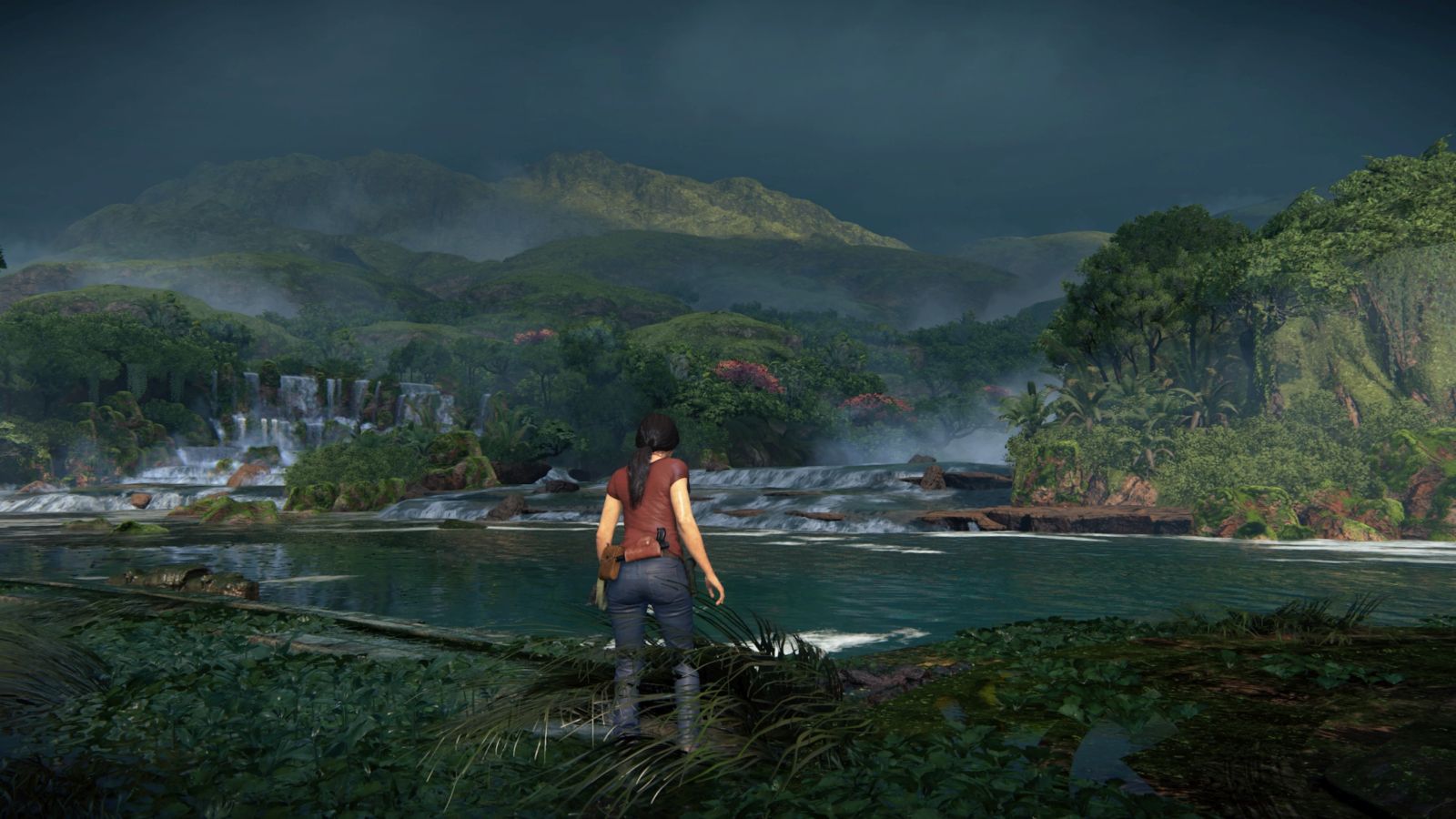 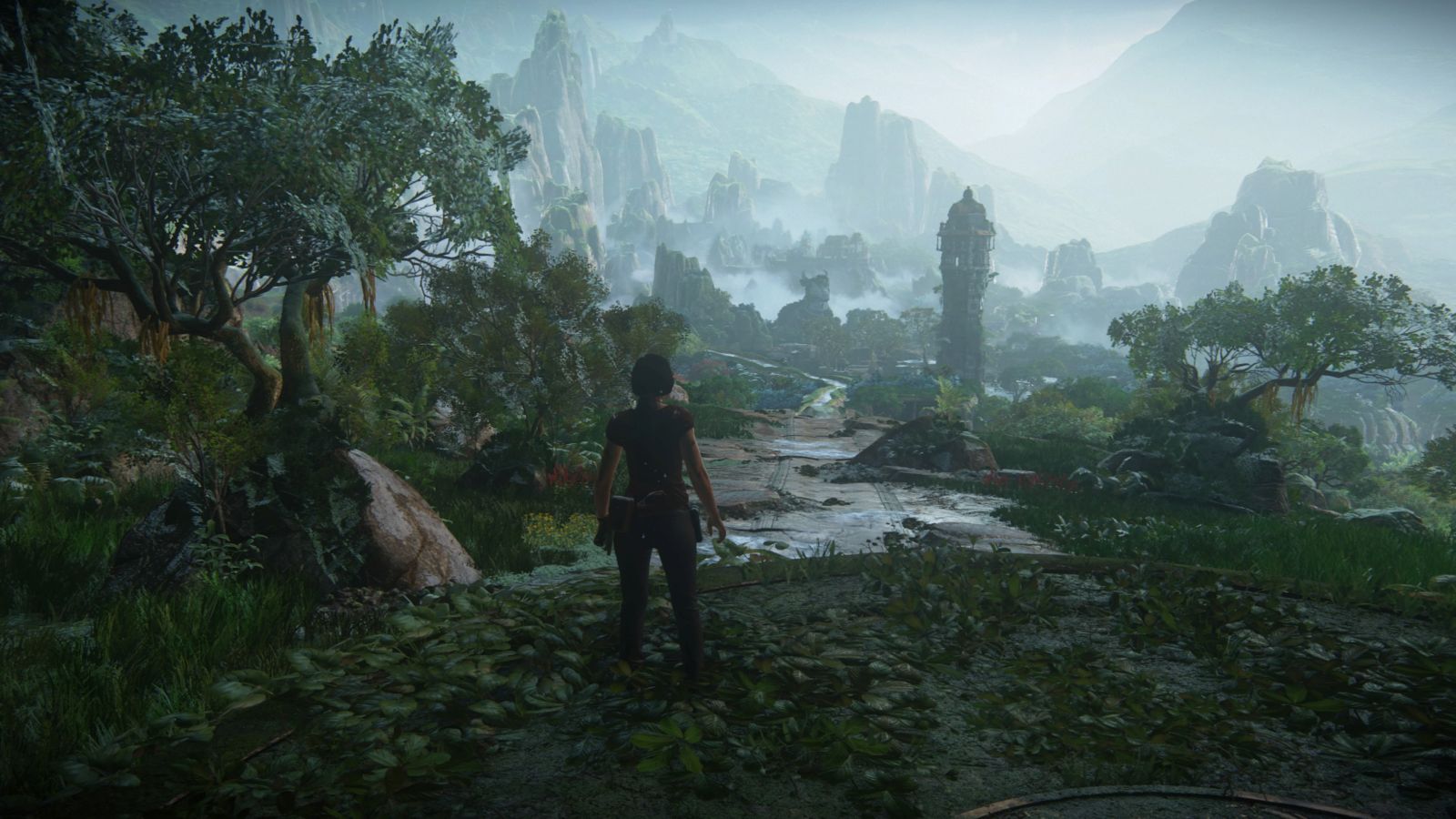 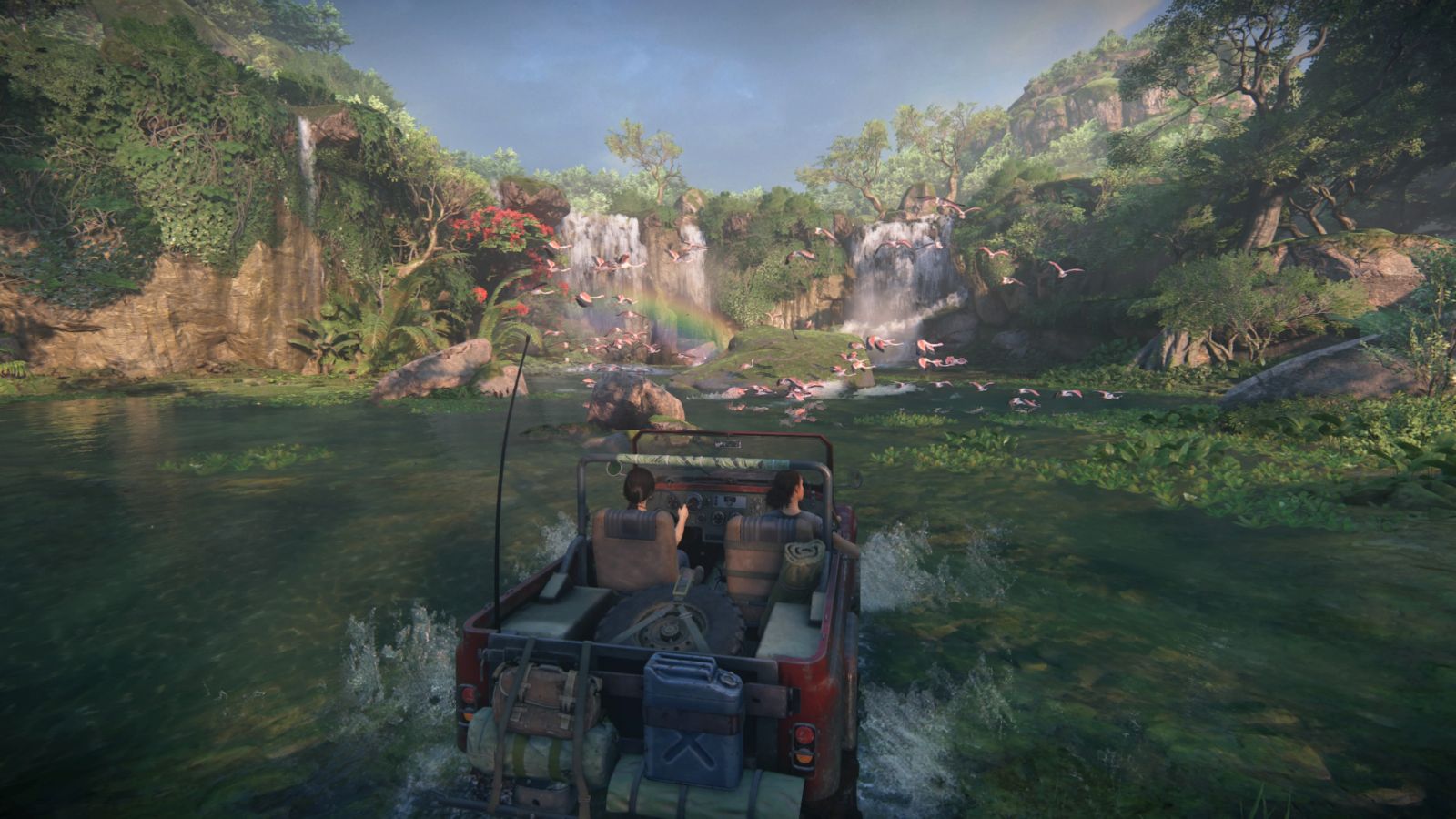 From the dilapidated cities of A Thief’s End to the lush open world of Lost Legacy, I found myself pausing to take in the scenery at nearly every new area I stumbled upon. The amount of detail poured into every facet of the world is staggering. What’s more impressive is that the world is presented with no loading times, no pop in, and no fog to hide details – just the opposite, in fact. The world is fully on display from all angles, inviting players to explore. If you see a hillside far off in the distance, the odds are you can explore it. It’s a playground like no other, and expertly crafted to allow players the freedom to explore, while still offering just enough subtle details to push players in the right direction if they only intend on progressing through the main storyline.

This collection also includes every bell and whistle from both releases, including a ton of skins, artwork, and cheats to unlock along with a slew of customization options to make either game as hard or as accessible as players may want. Difficulty levels range from including auto lock on and easy fire fights so players can just enjoy the story, to full on hardcore modes where even a slight mistake will cause a game over. Better yet, difficulty can be switched on the fly, so if you find the game too hard (or easy) you can quickly update your experience.

I suppose the biggest unanswered question here is the same one that plagues all remasters – is it worth purchasing? Stand alone, the entire package costs $49.99 which is a bit hard to swallow, seeing as either title can be found on sale for much lower than that on average in their PS4 iterations – although this is still the definitive version of each title and both games offer hours of fantastic gameplay. If you currently own either title then you can upgrade to the PS5 version for the low price of $10 each, which is absolutely worth it and most likely the route most players will be going anyway. Personally, I love a game that really shows off what the current gen consoles can do and for that alone, the price is worth it.

Uncharted: Legacy of Thieves collection brings two of the PlayStation 4’s best games to current gen consoles in brilliant remasters that would fool even the pickiest of gamers into believing these games were native made for the PlayStation 5. Packed full of adventure, heart, incredible storytelling, fantastic visuals, and believable characters, the Legacy of Thieves collections shows why Naughty Dog is one of the undisputed champions of the medium.

Richard Allen is a freelance writer and contributing editor for various publications. When not writing for Gaming Trend you can find him covering theatre for Broadway World, movies and TV for Fandomize, or working on original stories. An avid retro gamer, he is overly obsessed with Dragon's Lair. Chat with him via @thricetheartist on Twitter and @richardallenwrites on Facebook and Instagram.
Related Articles: Uncharted: Legacy of Thieves Collection
Share
Tweet
Share
Submit