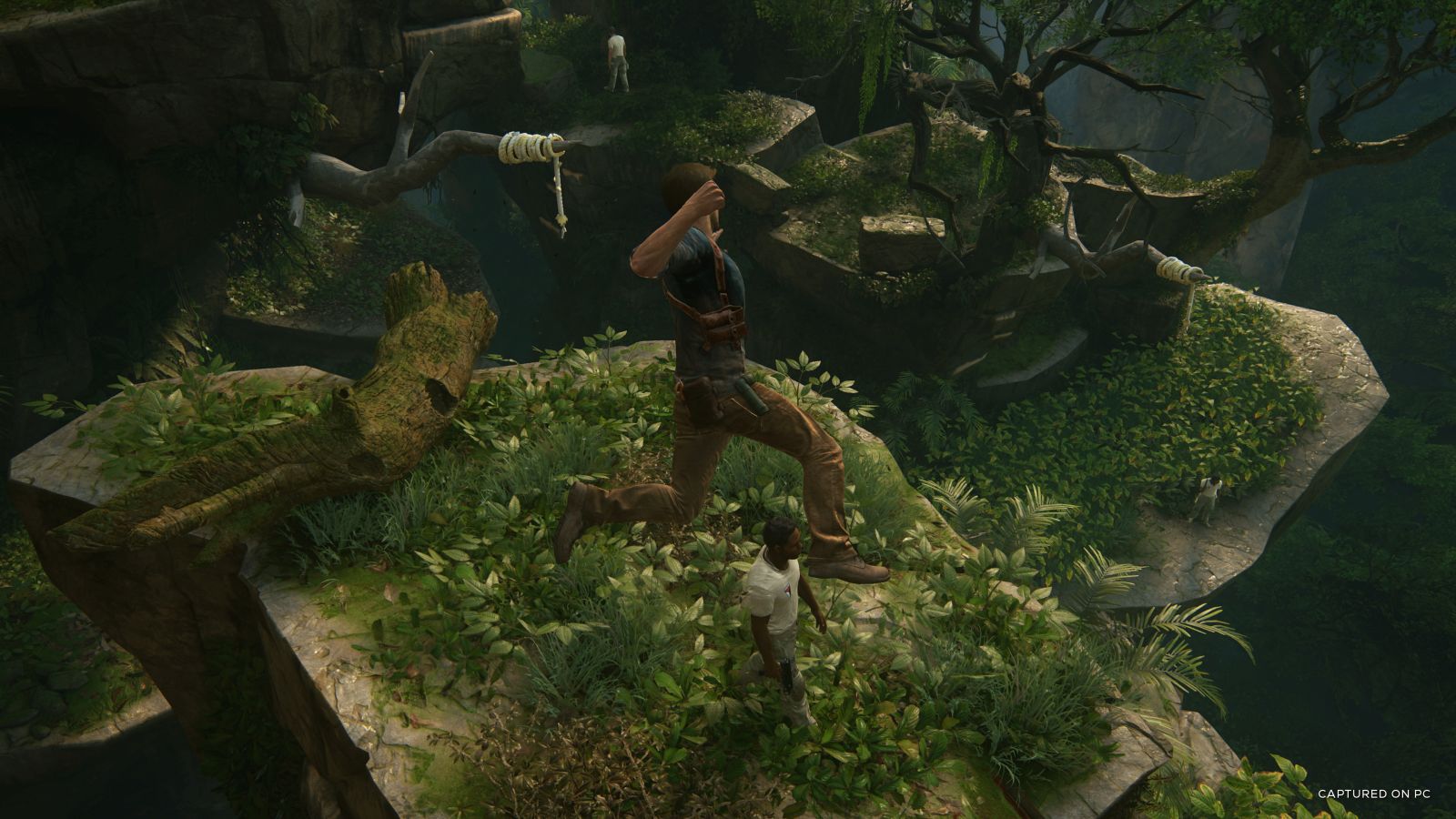 Ever since watching the Uncharted movie this year, I’ve wanted to go back to the games. Sure, I had an opportunity when the Legacy of Thieves Collection released on PS5 right around the corner of the movie, but our own Richard Allen handled that review with aplomb (his thoughts here). I know how good this series is, and it’s one of my absolute favorites of all time. So when we finally got word that the collection was hitting PC, it was time to go back. Just like Drake in Uncharted 4, I’ve been drawn back in… again.

If you didn’t already know, Uncharted 4: A Thief’s End is one of the best Uncharted games out there (although in my mind Among Thieves will always rule supreme). In a series that really didn’t need another one, given they wrapped it up nicely in the trilogy, somehow they managed to one-up themselves with Uncharted 4. The story of Drake’s long lost and assumed dead brother returning to pull him from his cushy life once more pulls on your heartstrings, and the additions of gorgeous, open areas to traverse along with the already stellar stealth, parkour, and puzzles combined into the perfect package. Not to mention sporting one of the best motion capture and voice casts on the planet with Nolan North, Emily Rose, and Richard McGonagle reprising their roles and the addition of Troy Baker as Sam Drake. You can refer to our PS4 review for more on it, but as the 100 at the bottom proclaims, Uncharted 4 is amazing.

Not to be left behind, Lost Legacy is what was meant to be DLC for Uncharted 4. It grew into more over its development than Naughty Dog originally thought, and ended up a standalone expansion. That being said, Lost Legacy is far more than an expansion. It’s a wonderful short story following Chloe Frazier along with enemy turned companion Nadine Ross, and the depth of Chloe’s character shines through. Sure, it’s all built on the tried and true Uncharted gameplay formula, but the storytelling is at its apex here, just like Uncharted 4’s. As with Uncharted 4, you can read our review to know more about its intricacies, but Lost Legacy was another win for Naughty Dog.

While it’s good and all to be some of the best games in existence, it doesn’t really matter if they don’t run well on your machine. This is the first time Uncharted or anything Naughty Dog has graced the PC platform (if we aren’t counting Math Jam or Keef The Thief from the 80s), so this is a momentous occasion for the brand. The great thing is, after extensive play of these games on PC, Uncharted doesn’t just perform decently, it excels.

Let’s talk tech. I run an NVIDIA RTX 3080 on my computer, so I may be ahead of some in terms of performance. Still, the results I’ve compiled don’t require a ton of memory used, so it’s entirely possible you may be able to get similar results even if you don’t have the same hardware.

One of the things that stands out with this collection is the framerate. You’d expect Uncharted to do well, after all the PS5 update was fantastic. But it jumps to another level on PC. I did a whole lot of different tests when it comes to different NVIDIA DLSS presets as well as level of settings, and they all came away pretty similar. The Uncharted games are so well optimized on PC, they run great in the face of almost anything. I had no DLSS on and Ultra settings, yet was still averaging over 90fps. Yes, these are both in the 5-6 years old range, but I’ve seen games hit PC at launch and run much more poorly, if at all.

Not only does the framerate look awesome, the visuals are also astonishing. We all know these games are pretty, but the ability to run the resolution higher also makes for a treat of an experience. The spectacle of an Uncharted game will always be its moments where you oversee the area you’re in. Lost Legacy has three of these in the first three chapters, e.g. Chloe emerging from behind clothes lines to see a war torn Indian city sprawling in the distance. Each vista you explore is just incredible, and it’s only amplified on PC.

While I’d go into more when it comes to frame rate, I thought I’d take a different approach and look at how much this is going to tax your system. There is a VRAM meter in your settings menu for each game, and I’ve found some interesting stats when clicking around and changing things up.

For Uncharted 4, no NVIDIA DLSS running will set you around 6345mbs if you’re sitting on Ultra settings. Moving to quality will be 6001mbs with render scaling off, and 5763mbs without. From there, you have your two performance modes, with 5559mbs on regular and 5414mbs with Ultra performance. It’s a lot of data for sure, but remember that this means you can get most of Uncharted’s potential without frying your graphics card. Even moreso, lowering your graphical fidelity to high or medium just makes life easier and gives you more steady performance. I know that’s a given, but as the stats prove, Uncharted won’t demand a NASA computer for you to run it on good or great settings. As for Lost Legacy, beyond a taxing opening with a lot of NPCs in a market, I’ve found it to run a little smoother with less VRAM needed to get similar framerates. In the end, it’s a lot of numbers that say that almost everyone can run Uncharted and enjoy it without feeling a need to sacrifice a bunch of fidelity for performance.

For reference, the recommended settings are-

My only issues come in forms of loading, and boy can they be annoying. Starting with shaders, these are the bane of my existence. I’ve booted two or three times into shaders building for the game, and while you can skip them it’s not recommended, otherwise you might run into performance issues. Where the problem arises is how long they take; I sat there for about ten minutes waiting on them, if not longer. That’s a long time to have to be patient, and some may just load another game. The other issue is the initial loading from the start menu into the game, even if you’re loading into a save. Even with Uncharted on an SSD, it took at least a minute or two for it to load, and with my initial loading into Lost Legacy took almost five minutes. I hope this is something that can be cleaned up in further patches, because it’s the only thing holding back a stellar collection. 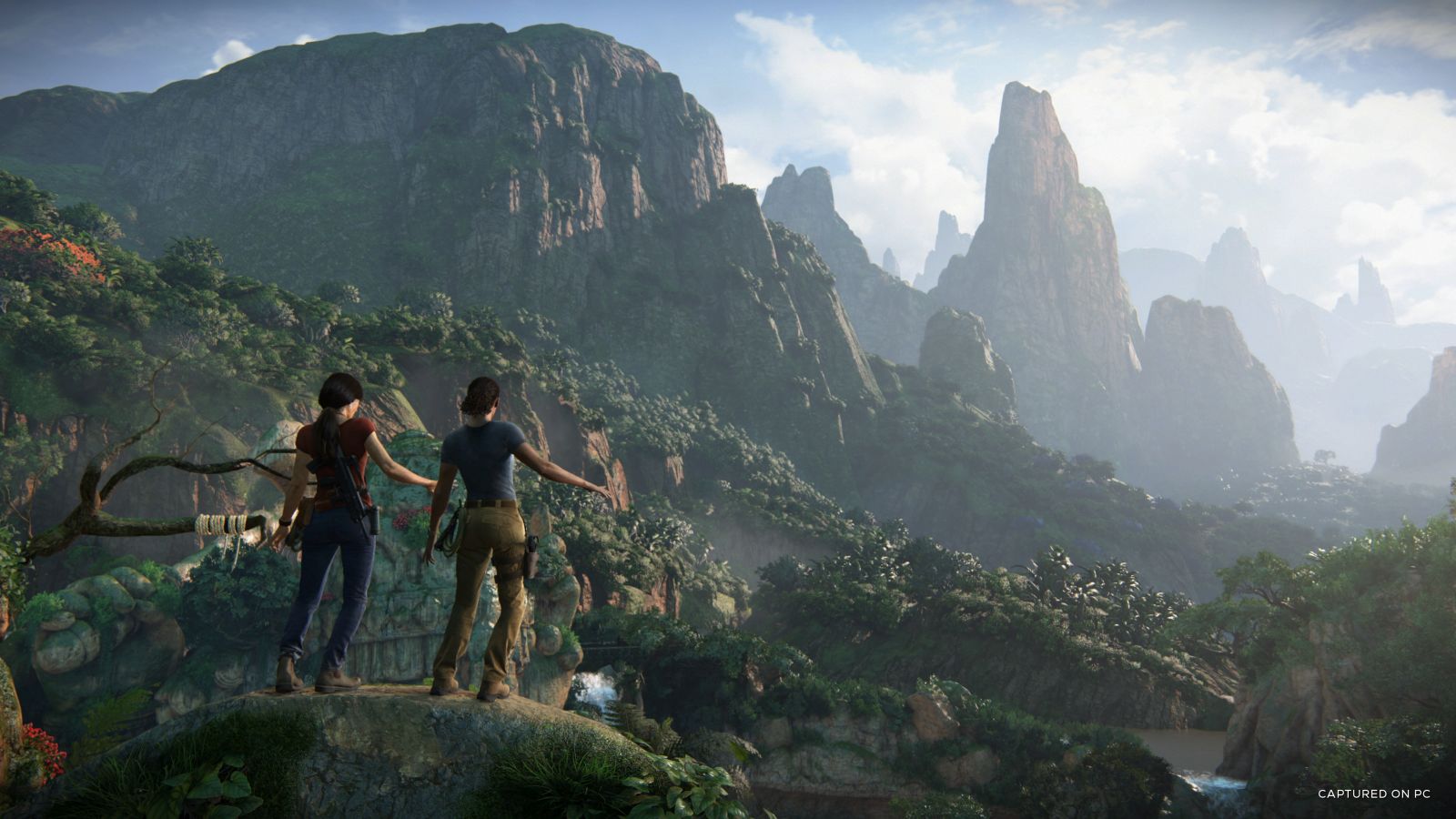 Beyond this, I have to address something missing for PC players; Uncharted 1-3. While Uncharted 4 is largely its own story, with a few callbacks to previous titles, it’s just weird to start a player’s experience with the fourth entry in a series. I wouldn’t be surprised if Uncharted: The Nathan Drake Collection is already being worked on for PC, heck, I wouldn’t be surprised if they’re trying to remaster or remake them à la Last Of Us: Part I style. But this seems more like we’ve gotten the most recent one ported over because it’s available. Maybe it’s just my OCD, but I’d have liked to see 1-3 hit PC first, even if just the current version of the Nathan Drake collection.

In case you missed it, Uncharted: Legacy of Thieves Collection is in fact verified for the Steam Deck. I took a little time playing it away from my desktop and am happy to say it’s arguably as good as playing on a PC when you scale down to this kind of device. On medium settings (which look pretty good on the Steam Deck’s screen), I was getting pretty consistent 40 or higher frames per second, sometimes even jumping to 50-55. While compared to my 100+ on my PC one could say it’s a downgrade, on the Steam Deck it runs admirably, even in action heavy moments. If you’re on the go, it’s a great way to keep playing, especially with Steam’s cloud saves available.

Being able to play one of the best games in a generation on any platform is great, but when it’s optimized to perfection it’s even better. Uncharted: Legacy of Thieves Collection is one of those, a masterpiece that is a masterclass of a port. PC players rejoice, you’re once again getting PlayStations greatest at their absolute best.

David Burdette is a gamer/writer/content creator from TN and Lead Editor for Gaming Trend. He loves Playstation, Star Wars, Marvel, and many other fandoms. He also plays way too much Call Of Duty. You can chat with him on Twitter @SplitEnd89.
Related Articles: Uncharted: Legacy of Thieves Collection
Share
Tweet
Share
Submit