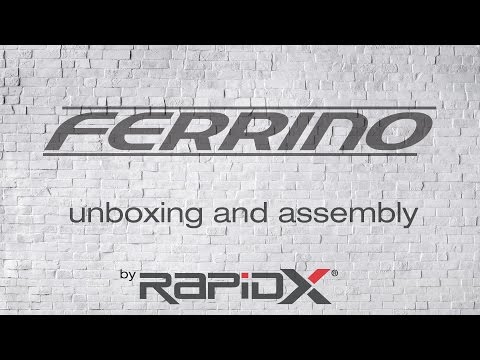 I’ve got 53 hours commanding my team in XCOM 2. I’ve trekked 49 hours with friends in Borderlands 2. The Dragon Age Trilogy soaked me for over 300 hours, and Mass Effect has captured over 200 hours with multiple playthroughs. In all, Steam says I’ve spent 1,083 hours at the helm of my PC, piloting mechs, blasting aliens, racing, and casting spells.

That’s a lot of time sitting on my ass.

If you think about it, comfort is one of the things we don’t often upgrade. We keep our mattresses too long, we wear out our couches, and we’ll sit in our gaming chairs until our behinds get bruised. Like speakers and monitors, a good chair can make saving the universe more enjoyable. After taking a spin in a RapidX Ferrino Gaming Chair at a recent trade show, I knew I had to put my butt in one to see if a few dozen hours lived up to the comfort conveyed in my first impressions.

Reviewing a chair
There isn’t a lot of criteria to review a chair — most of the time you know fairly quickly whether you like a seat or not. The truth of the matter is that it goes much deeper than that: as a disabled veteran, my injuries are exacerbated by poorly constructed and half-stuffed chairs. Sciatic nerve soreness, lower back strain, tight shoulders from keyboard-reaching, neck aches — it all adds up as the number of birthdays stack. A good chair can help with all of these conditions.

The RapidX Ferrino, and Atë, one of our doggos.

A good chair isn’t just about how much stuffing you can jam into it. Adjustability, where that stuffing is placed, the materials and construction, and the overall design (hopefully) culminates in a seat that is more than an L shape with legs.

Assembly
The RapidX Ferrino comes unassembled, fortunately putting it together is a snap. Unpacking the box, there are only a few large components and a handful of subcomponents. The seat comes with the arms and armrests attached, with the back being a separate major second piece. The metal base, reinforced casters, hydraulic cylinder, adjustment system, and two unattached pillows also come in the box. Using the included Allen wrench and the instructions (or the manufacturer’s official video if that’s your thing) I had the whole thing together in about 15 minutes.

I was immediately surprised by the construction of the Ferrino. The chair base is made from a heavy aluminum alloy, and the casters (while still plastic) are more reinforced than the usual fare. Inside the chair is a dense polyurethane foam core instead of fluffy stuffing — the same you’d find in a Formula 1 or NASCAR racing seat. Holding all of that goodness is PVC leather with highly-reinforced stitching. With the material this chair is made of, it isn’t going to come apart on you anytime soon. I can’t even pretend that I know proper orthopedic or ergonomic design, but all I can tell you is that there’s more here than just nice colors (the chair also comes in black, blue, pink, red, brown, and black/white) and a solid base.

The stitching is reinforced and should hold up to a lot of abuse.

Pressure points: A lesson in sitting
Cheap rollers, like the kind you find in some office settings, can cause a litany of problems due to spinal alignment, pressure points on your sciatic nerves and the back of your legs, improper blood flow, and the like. If you’ve ever felt beat up and sore after a day of sitting at work, your chair might be the culprit. The Ferrino has a full back, as well as several distentions that create a cradling effect at the shoulders and lower back. This racecar bucket seat style pushes the shoulders forward and even with the spinal plane — the proper neutral position for typing. It also has smaller ‘wings’ that keeps the body in the center of the chair and straight. Included in the package are two neck and lumbar support pillows. These are made of the same material, but use elastic straps and plastic buckles. It is the only thing in the entire package that feels out of place. The plastic and elastic make the head support prone to shifting out of comfortable position, and it’s not as likely to hold up to the same rigors as the rest of the chair. The lumbar pillow stays in place better as the core of your body move less than your head and shoulders do.

The lumbar cushion and head rest are a great pack-in.

Beyond the construction and add-on pillows, the back portion of the chair reclines to a staggering 155 degrees. I’ll freely admit that I don’t like my center point leaned that far back, as it makes me feel like the whole thing is going to flip out from under me, but surprisingly…it didn’t. Perhaps it’s the metal construction, but manufacturer RapidX has built a shockingly balanced seat here. Also adjustable are the armrests. They can be moved three inches up or down, and can also slide forward and backwards. I had several people try out the Ferrino, all of different heights, but with minor adjustments they were able to settle in comfortably. Naturally, the chair can be raised and lowered (from 14 to 16.6 inches) to fit your needs.

If there is one thing that some gamers might have an issue with, it’s the maximum weight of the Ferrino. Able to support 265lbs, the chair might not be a fit if you happen to be heavier than that. Naturally, some of my friends were larger than that. While they found the chair extremely comfortable, none were interested in testing out that 155 degree lean trick, despite my chuckling encouragement to the contrary.

My fearless wife will test the leaning functions!

It’s entirely anecdotal, but after using this chair for a few days, I started to feel less pain in the usual pressure spots. It also has a shorter seat length, meaning it allowed my knees to bend naturally. Combined with the lumbar support pillow, I found that my lower back didn’t feel as tight after a long gaming session. I also found that I was sitting straighter instead of slouching into my seat. I also tend to turn sideways in my seat to alleviate sciatic pain, but I didn’t have to do that here.

While I’ve seen sales that drop the price a bit more, the MSRP of the RapidX Ferrino is $349. You can snap it up on Amazon or from RapidX directly, and I wish I'd picked it up sooner, based on how it has made my back feel. The pillows could use a little better strap and clip construction, but beyond that this chair is damned near flawless. Treat yourself to something that makes every game better, just be mindful of that weight limit if you lean back and test that 155 degree recline feature.

Ron Burke is the Editor in Chief for Gaming Trend. Currently living in Fort Worth, Texas, Ron is an old-school gamer who enjoys CRPGs, action/adventure, platformers, music games, and has recently gotten into tabletop gaming. Ron is also a fourth degree black belt, with a Master's rank in Matsumura Seito Shōrin-ryū, Moo Duk Kwan Tang Soo Do, Universal Tang Soo Do Alliance, and International Tang Soo Do Federation. He also holds ranks in several other styles in his search to be a well-rounded fighter. Ron has been married to Gaming Trend Editor, Laura Burke, for 21 years. They have three dogs - Pazuzu (Irish Terrier), Atë, and Calliope (both Australian Kelpie/Pit Bull mixes).
Related Articles: RapidX Ferrino Gaming Chair
Share
Tweet
Share
Submit