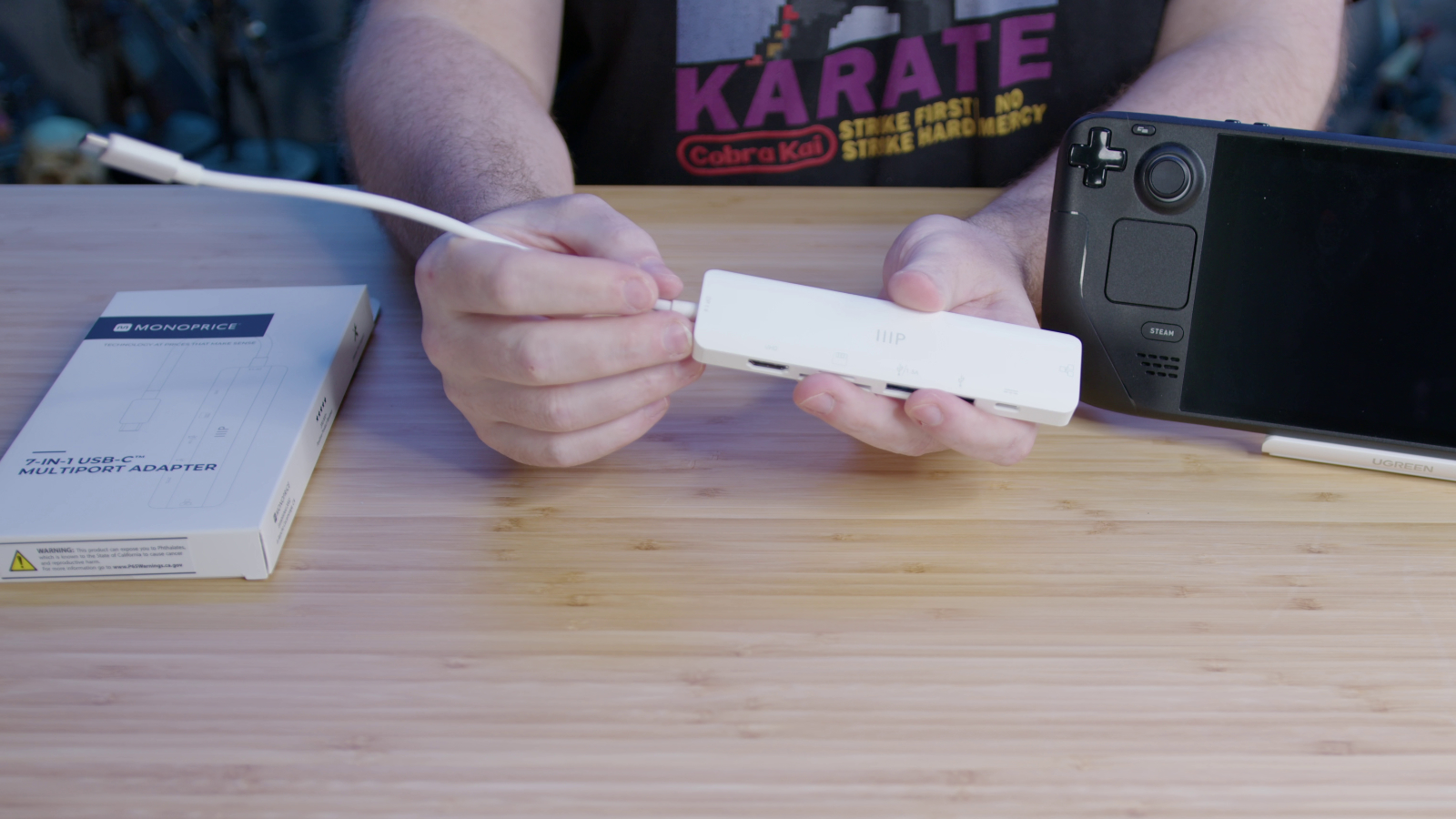 The folks at Valve have turned out some excellent products, but let’s not pretend their track record has been flawless. The Valve Index is an incredible VR headset, and The Steam Machine was a solid idea executed poorly. The Steam Link was just ahead of its time, but the Steam Controller was just a terrible idea all the way through. The Steam Deck, on the other hand, is an absolutely inspired piece of tech that utilizes a little bit of every one of those devices. The OS was born of the Steam Machine, the streaming aspects were culled straight from the Steam Link, the trackpads are imported from the Steam Controller, and the overall quality of the device matches that of the Index. I absolutely LOVE this machine, but there’s one thing missing.

While the Steam Deck has been out for almost eight months, Valve has yet to ship an official dock for the thing. What we are left with is a pile of adapters and workarounds to try to make the device usable in Desktop mode, or to load our favorite emulation software. As I shuffled my USB-A to USB-C adapter from my mouse to my USB stick several times, I knew I was done waiting around to find a good solution. A quick trip to Monoprice provided the perfect solution, but which one to pick? Snapping up the 7-in-1 and 6-in-1 USB-C Multiport devices, David and I set out to put our respective Steam Decks to the test.

The device I picked up, the 7-in-1 USB-C Multiport 4K HDMI Adapter (that’s a mouthful!) has a number of really attractive features that I wasn’t quite sure would work with the Steam Deck, but if they do, it’d be a major win. Right out of the gate, I knew the [email protected] HDMI wasn’t going to get heavy use as the device doesn’t support that much oomph. That said, the 100W power passthrough could be the charge-and-play solution that gets things done. The SD and microSD 3.0 card slot would allow me to load up goodies on my secondary storage device at upwards of 104MBps. Consequently it supports MMC, SD, SDHC, and SDXC, all simultaneously addressable, which would be handy for my camera work when the dock isn’t plugged into the Steam Deck. Two USB 3.0 Type A ports and one Type-C would give me upwards of 5Gbps of throughput – more than enough to handle transfers from a thumbdrive to something internal. Finally, the Gigabit Ethernet port would give me connectivity other than just WiFi – perfect for loading games from Steam at max speed. It was a lot to test, but I was eager for all of these possible use cases, especially since this device wasn’t proprietary and I could use it outside of just the Steam Deck. 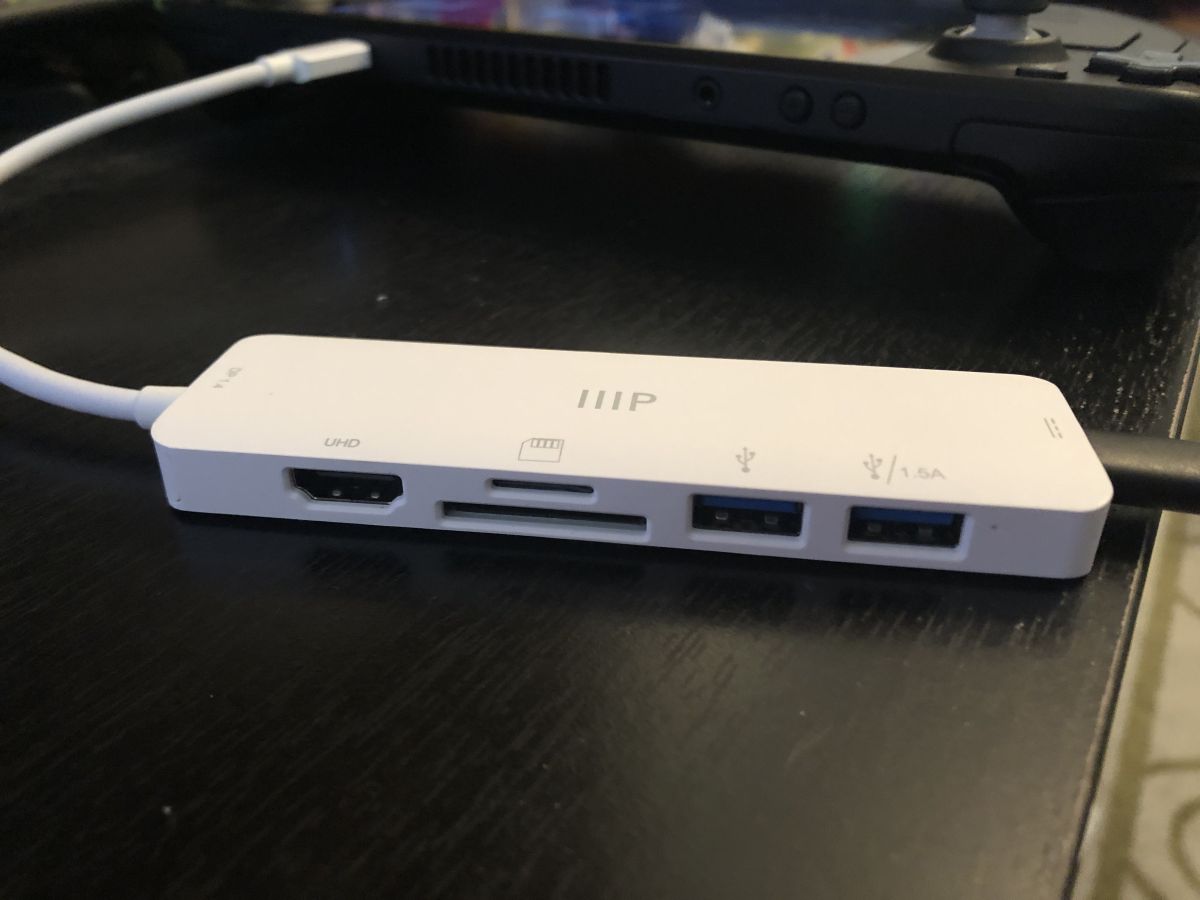 David nabbed the little brother to the 7-in-1, not-so-creatively dubbed the 6-in-1 USB-C Multiport 4K HDMI Adapter. Like the 7-in-1, the device supports DisplayPort 1.4 at up to [email protected], has 100W of USB Type-C power passthrough, and it has two Type-A ports and one USB 3 port with speeds up to 5Gbps. The SD and microSD 3.0 card slots are also present and accounted for, providing 104Mbps transfer speeds. The thing that is missing, however, is the Ethernet port. Would that make a world of difference? It was time for testing.

I, unlike Ron, don’t have consistent access to my router near my setup so an Ethernet port wouldn’t do me much good. The 7-in-1 has that port on the opposite end of the device to the USB-C connector, and the 6-in-1 instead moves the USB-C into that position. This essentially makes the dock a nice passthrough when charging. It’s certainly possible to still use the Deck while Docked with the Monoprice, but the dock is just weighty enough that I worry the plug will fall out. Instead, I chose to simply plug in my 8-Bitdo controller which worked perfectly. I could also transfer over data using a flash drive pretty quickly, while my desktop took about 15 minutes to copy over 14 gigs of Fallout New Vegas Mods, getting them to the Deck only took 3 minutes. Daisy chaining another passthrough for recording purposes also worked very well, though I did notice a few audio hiccups occasionally like stuttering or cutting out completely.

While I’m here, let’s bring in my particular brand of stupid and try using a CD with the dock and deck. I would try a floppy disk as well, but sadly I don’t have a USB floppy drive. YET. I have two discs to try: Barbie Detective, and Laura Bow in The Dagger of Amon Ra. SCUMM VM can’t access the CD drive for whatever reason, but copying over the files took about 10 minutes for Barbie. Sadly, even when on the SSD, SCUMM couldn’t run Barbie and the disc for Dagger appeared as empty. While the experiment didn’t result in any classic games, in theory it could work. Back to you, Ron! 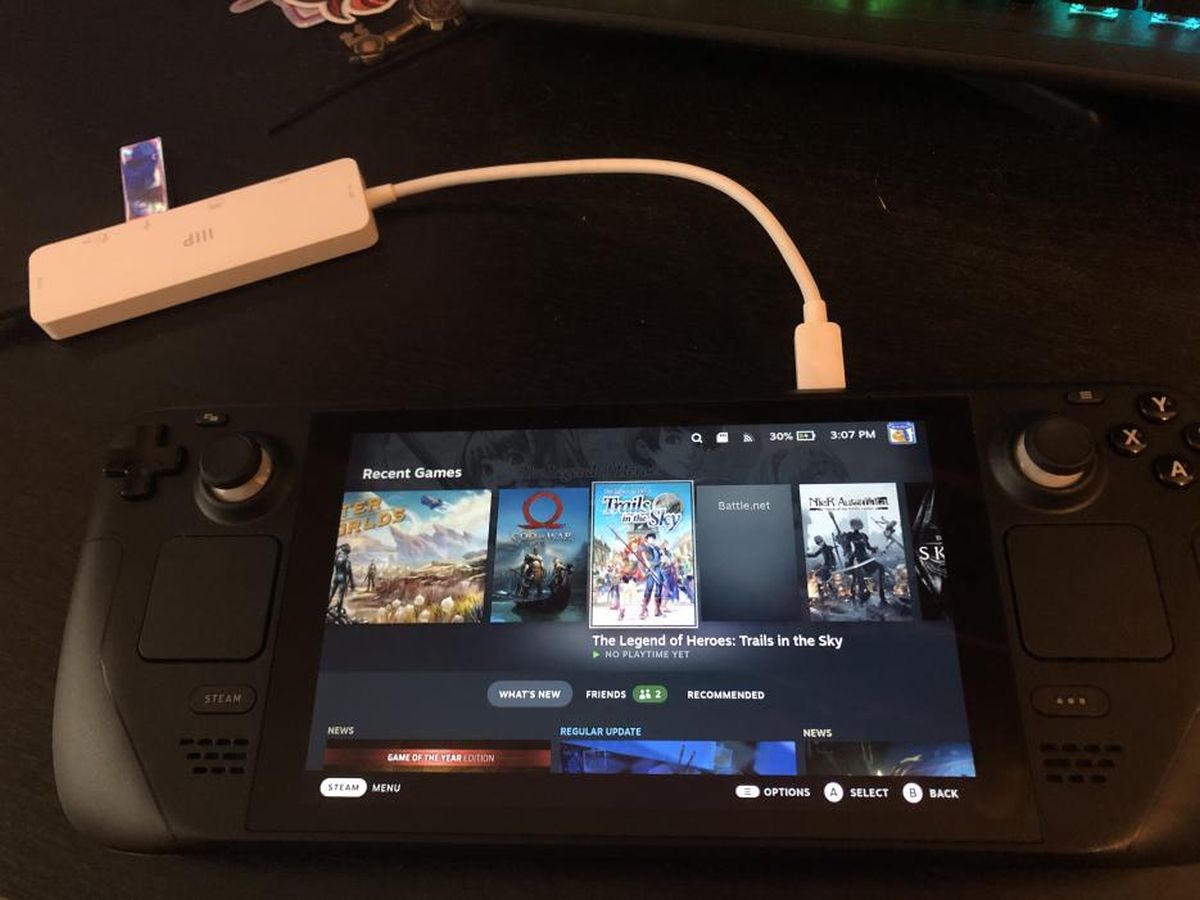 The price for the Monoprice 6-in-1 device is $29.99, with the Ethernet port on the 7-in-1 device running an extra $10 for an MSRP of $39.99. I regularly have access to Ethernet, but David does not, so purely coincidentally we ended up with the most appropriate devices for our individual use cases. Yours may vary, but the price difference between the two of them is so slight that it might not matter. My approach has always been “better to have it and not need it than need it and not have it”, but the extra $10 spot might also be enough savings to pick up a dumb stand for the deck.

While we continue to wait for something official (and even then, I suspect the price will be outrageous), both of these low-cost options from Monoprice look to be a fantastic solution in the meantime.

Ron Burke is the Editor in Chief for Gaming Trend. Currently living in Fort Worth, Texas, Ron is an old-school gamer who enjoys CRPGs, action/adventure, platformers, music games, and has recently gotten into tabletop gaming. Ron is also a fourth degree black belt, with a Master's rank in Matsumura Seito Shōrin-ryū, Moo Duk Kwan Tang Soo Do, Universal Tang Soo Do Alliance, and International Tang Soo Do Federation. He also holds ranks in several other styles in his search to be a well-rounded fighter. Ron has been married to Gaming Trend Editor, Laura Burke, for 21 years. They have three dogs - Pazuzu (Irish Terrier), Atë, and Calliope (both Australian Kelpie/Pit Bull mixes).
Related Articles: Hardware, Monoprice 7-in-1 USB Dock
Share
Tweet
Share
Submit