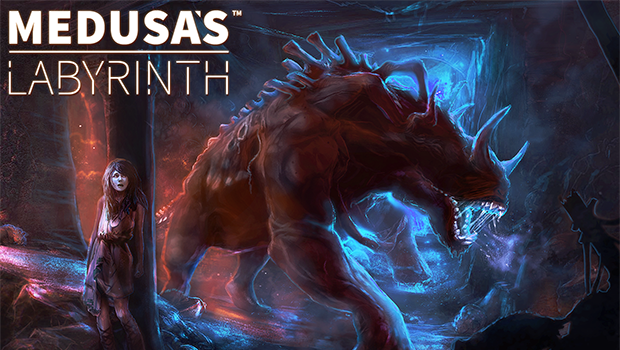 I have always enjoyed adventure games, from Companions of Xanth (I just dated myself, didn’t I?) to Myst to The Witness, I get an undeniable joy out of exploring worlds from a first person perspective from the comfort of my couch. Eager for a fresh take on a favorite genre, I donned my Vive headset and stepped into the world of Medusa’s Labyrinth, a pulse-pounding first person mythological horror exploration game set in ancient Greece. Guided only by instinct and a few scattered scrolls which tell the heartbreaking story of a family being torn apart by religious tradition, you must descend into the labyrinth below Temple Island and wander through twisting, turning, unmarked catacombs, venturing ever deeper into the crumbling, ancient underground. The family’s story only grows darker as you step into the catacombs beneath Poseidon’s Temple and make your way through the crumbling, twisting hallways. Hope turns to despair, loneliness morphs to rage, and rage slowly melts into madness.

Created by Guru Games for flat screen gaming, this action adventure game is free to play, and was recently adapted for virtual reality. While the very nature of VR creates a much more immersive and an incredibly tense experience, the game does suffer from a few quirks because of its very nature of being adapted, rather than created, for VR.

Medusa’s Labyrinth excels at building tension. Distant and not quite human footsteps echo through the claustrophobic tunnels, alerting you that you are not alone. Skulls, lacking their jawbones, slump and stare forlornly as you pass from where they lay, discarded and forgotten, on the burial slabs lining the walls. You are always acutely aware of the darkness and the small, enclosed spaces around you. Ambient sounds, well-timed moody music, and even your own simulated breathing combine to create a white knuckle, hold-your-breath experience which simply cannot be experienced outside of VR. Explosions collapse nearby passageways, rocking your virtual vision and combining with an artificial ringing in your ears, driving home just how close and powerful of a blast you just survived. Inhuman creatures wander the corridors, their almost-human forms and monstrously grotesque faces unnervingly and infinitely unpleasant to look at.

There is another kind of tension which can quickly build while playing this game, an unfortunate side effect of the simulated movement which you must use to get around the labyrinth. While it is not explained at all in the game itself, your character moves forward when you rest your thumb on the top of the circle disk of the Vive wand. This game uses what is becoming a common feature, yet one which is both unintuitive and very likely to cause motion sickness mechanic of using the direction of your head to dictate which direction you move. If you press the circle pad at the very front center, intending to move straight forward, but see something to your right, turning your head will result in your character moving to the right instead of continuing straight forward. Medusa’s Labyrinth does, at least, allow you to counteract some of this; if you move your head to the right and your thumb to the left, your character will stay mostly straight, if you can remember that little ritual.

The simulated movement is a bit glitchy here and there. Sometimes the screen seems to move forward of its own will, even when not touching the circle pad, and at one point, I stopped and picked up a scroll which contained a rather large amount of text. Halfway through reading, the screen unexpectedly began to advance again, leaving my stomach trailing behind.

It’s easy to tell that Medusa’s Labyrinth is a game adapted to VR, not built for it. Small details help break the illusion of the virtual world, such as torches casting light in the exact same ways and areas, regardless of if you hold the flame high or low, more to the right or more to the left. The game makes good use of motion controls, though these controls proved to be more intuitive for some players than for others. You main weapons within this game are a bow and arrow: the bow ‘defaults’ to your back, while your quiver rests on the opposite hip from the hand holding your bow. I found it quite natural to reach over my shoulder, squeeze the trigger to grab my bow, reach to my side to pull out an arrow, draw and fire, using muscle memory I learned from archery classes in summer camp. Those who skipped summer camp found themselves constantly struggling to locate their quiver out of the bottom corner of their vision, and constantly adjust their heads, as they felt the need to actually see their arrows before grabbing them.

Torches help break the immersion of the world, casting light in the same way no matter how you hold them

Success in Medusa’s Labyrinth requires a great deal of both exploration and stealth, but neither of these elements translate very well into virtual reality. With no map, markers, way to identify corridors you’ve already explored, or directions, you’re clearly intended to take your time and explore the massive catacombs, making wrong turns, backtracking and traveling in circles. While I find this kind of game oddly soothing on flat screens (usually while lounging on my couch and munching on popcorn) it’s an entirely different and far more frustrating experience when you are inside a visor. There’s no effective way to draw your own map, and finding that you just wandered back into the same room yet again is far more frustrating in VR than in traditional gaming. While not a fault of the game itself, dying, respawning and having to navigate the same halls again becomes tedious far more quickly in VR because you have to physically repeat the same movements over and over again.

While stealth is a critical element for this title, it is not very well executed. The incredibly difficult to read tooltip (more on tool tips later) instructs you to press X to crouch and sneak, a tricky task, given that there is no X button on Vive wands. Pressing the bottom of the left circle pad seems to do the trick, but there is no indicator that you are sneaking, outside of a slight shift in view: higher for standing, lower for crouching. On more than one occasion I met my death at the hands of a snarling monster when I stepped right up to to it, plodding loudly through the catacombs, mistakenly thinking I was sneaking silently passed.

With no map, markers or directions, you spend a lot of time wandering the labyrinth

The tool tips and font are another way in which the VR adaptation is sorely lacking. While scrolls are rendered with a decent amount of care, featuring tattered edges, curling corners and the discoloration that comes with age, they are overlain by plain, white, and very modern text which floats just above the surface. This breaks the illusion and pulls you out of the amazing immersion the rest of the setting creates. Tooltips are even worse, as they appear only briefly, cannot be reviewed at will, and linger in the bottom third of your vision. This informational text remains locked in place and moves with your head, so you cannot lower your chin in order to better see the text. Several times, the tool tip was far enough down that it became a blurry blob of unreadable double-vision, and vanished before I was able to free up a hand to lift my visor high enough to be able to read it.

Medusa's Labyrinth has made an art out of building tension, using a brilliant combination of setting, sounds and truly grotesque monsters to create several heart-pounding, white-knuckle, hold-your-breath and drop-your-torch moments. While this game perfectly sets the stage, this setting is tragically undermined by unclear controls which have not been well adapted to VR, nausea-inducing simulated motion, and the tedious chore of physically wandering blindly through an unmarked labyrinth.