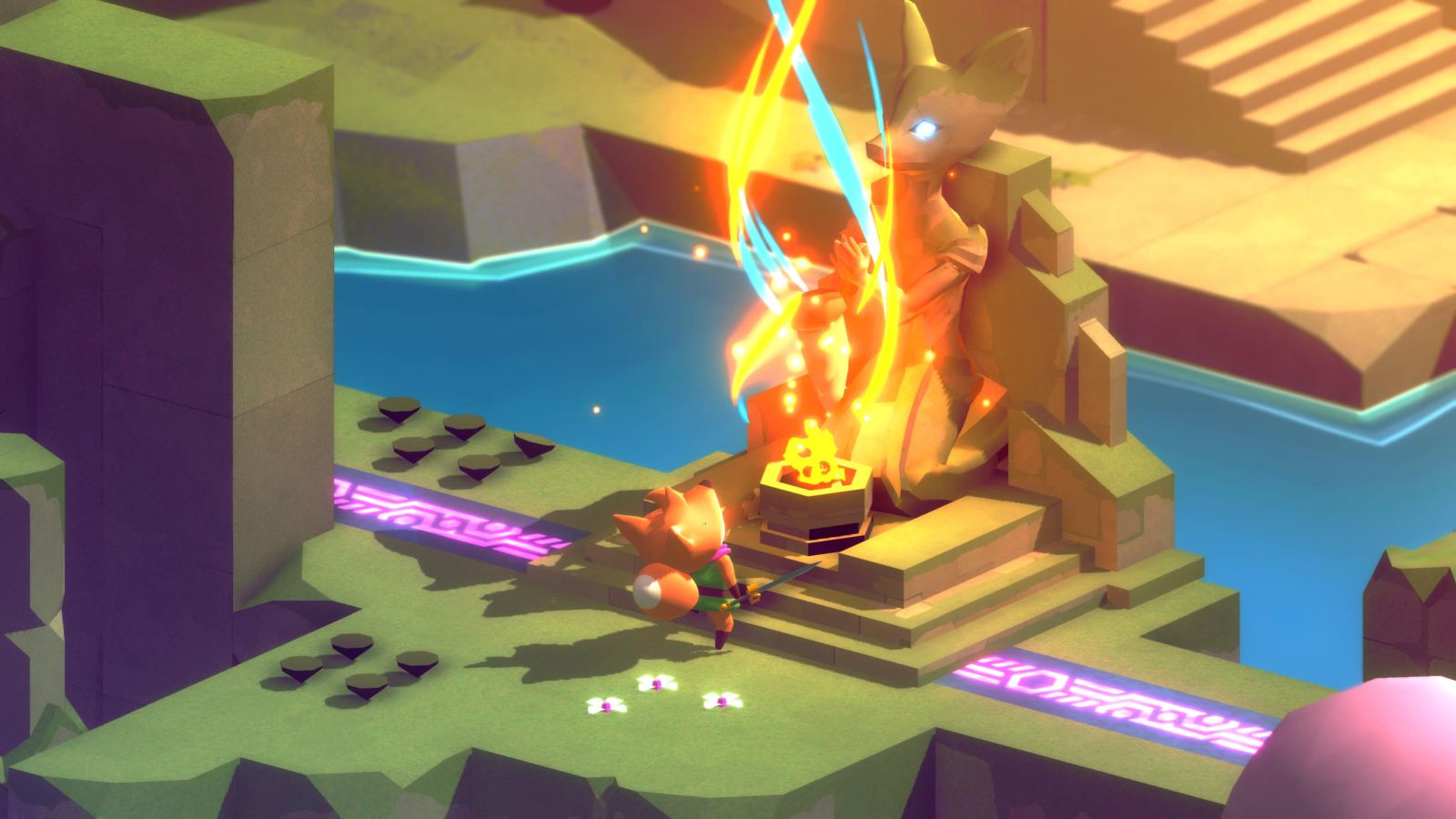 Since its initial release Tunic has been given multiple perfect review scores (including from Gaming Trend) and a plethora of rewards, so you can imagine the anticipation I felt as I booted up the recent PS5 release for the first time, ready to experience the groundbreaking masterpiece that I had read so much about. I’ll admit though, that hype faded a bit as I began my journey. While cute and fun, I wasn’t immediately drawn into Tunic’s world – the lack of explanation for game mechanics, having to find pieces of the instruction manual (and map) as you progress rather than having access from the start, the inability to read nearly anything in the game – all slightly turned me off.

But then, something clicked. About an hour into my journey, I “got” what Tunic was going for. The map and how to progress began to make sense and I learned that the charm to Tunic was experimenting and making wild guesses. New item and no idea what it’s for? Try it out in different areas and in different scenarios! Those gibberish pages you find scattered throughout the world? Read between the lines, examine the pictures, piece the hints together. The game began to make perfect sense, and I realized that I had been the problem. I had approached Tunic with the wrong mindset. Once I allowed myself to give up my preconceived notions of how the game should play, I began to get swept away into its beautiful and incredibly well made world. 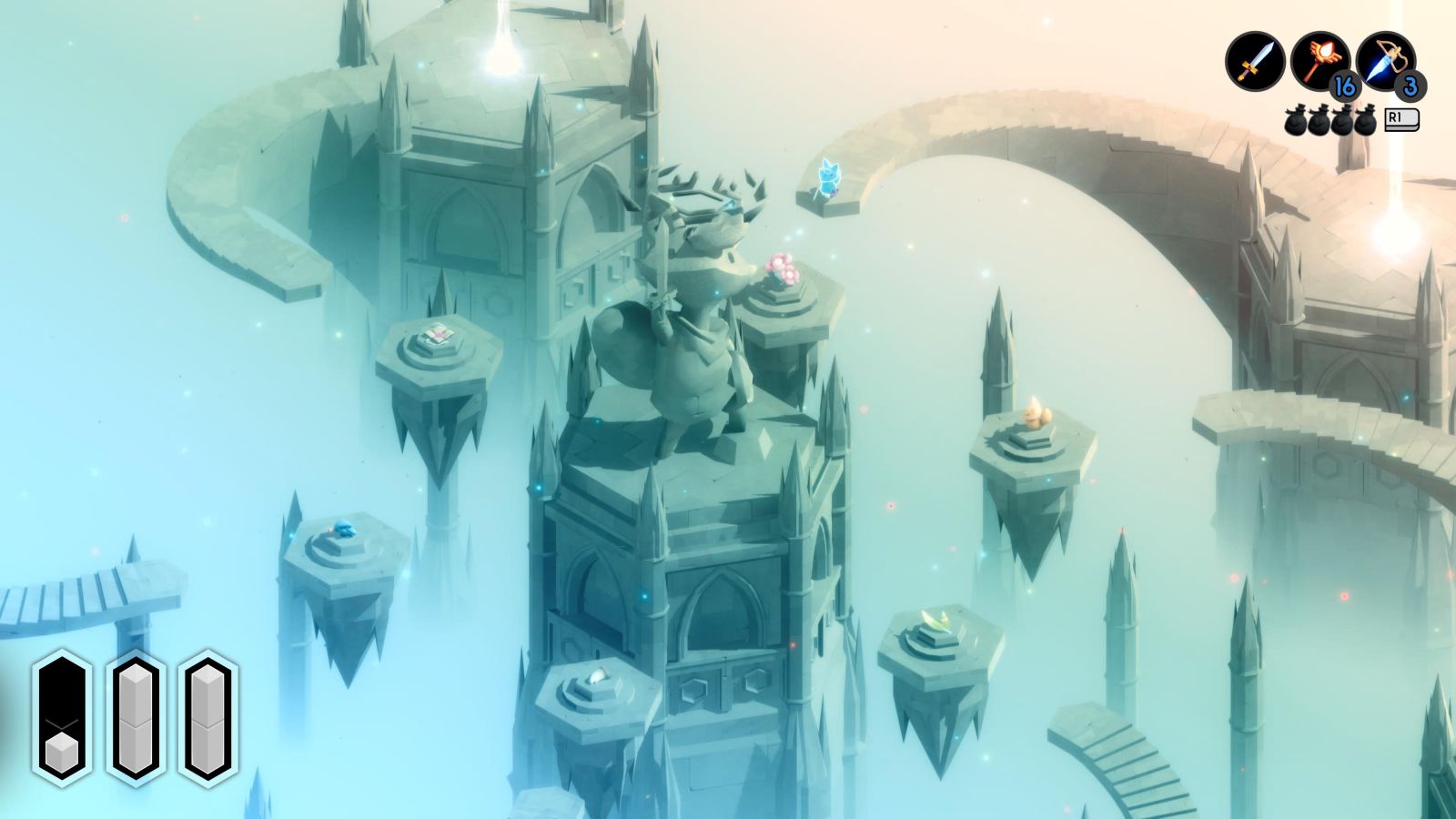 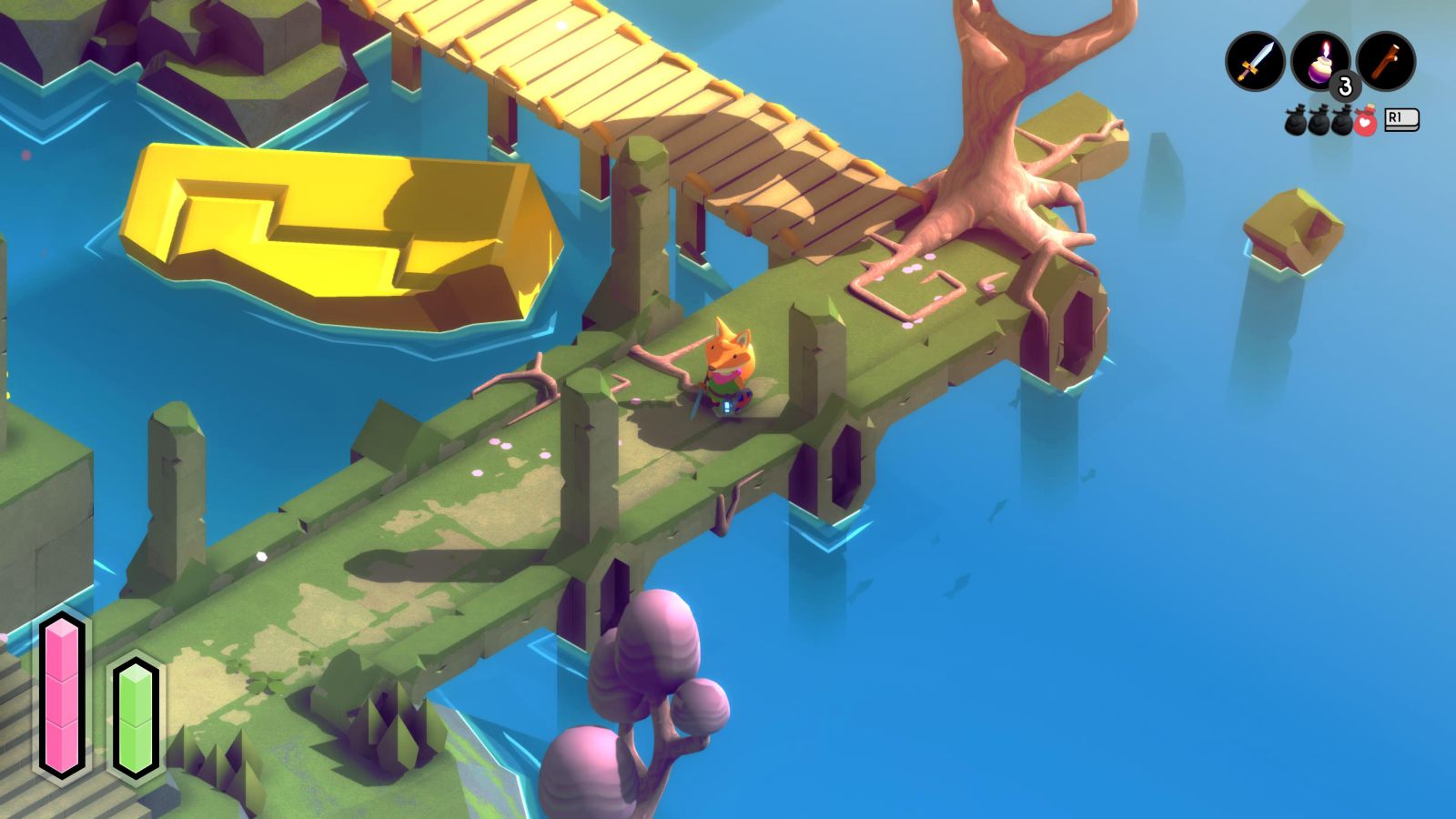 Tunic is a charming love letter to retro Zelda titles while being wholly unique. What begins as a simple story of a Fox attempting to ring a few bells becomes an epic fantasy sprawling an ever-expanding world with far more layers than I had expected. Lush forests lead to barren deserts, to underground caverns, to libraries at the top of the world, to quarries filled with menacing enemies. There’s no end to the creativity and excellent level design on display. As you learn and grow, so too does the world around you. Exploration becomes key, with each new boss slain, each new ability gained, comes a new method of exploration and new challenges.

I quickly learned that Tunic presented a far greater challenge than its cutesy exterior lets on. Bosses especially take a ton of patience, perfectly executed attacks, and plenty of experimentation to defeat. Some bosses may be weak to a shotgun blast and are best kept at bay, while others may be weak to you playing offensively and unleashing a flurry of close range sword attacks. There is a limit to both your stamina and the amount of shotgun blasts or magic attacks you can unleash, so you can’t just spam an attack and hope for the best. Strategy is required. Need 10 or 12 shotgun blasts to defeat a boss but only have enough MP for three? Better stock up on the blueberries which allow you to regain a shot. I absolutely loved fighting bosses, discovering their weaknesses, and then figuring out how to best equip myself for the battle. 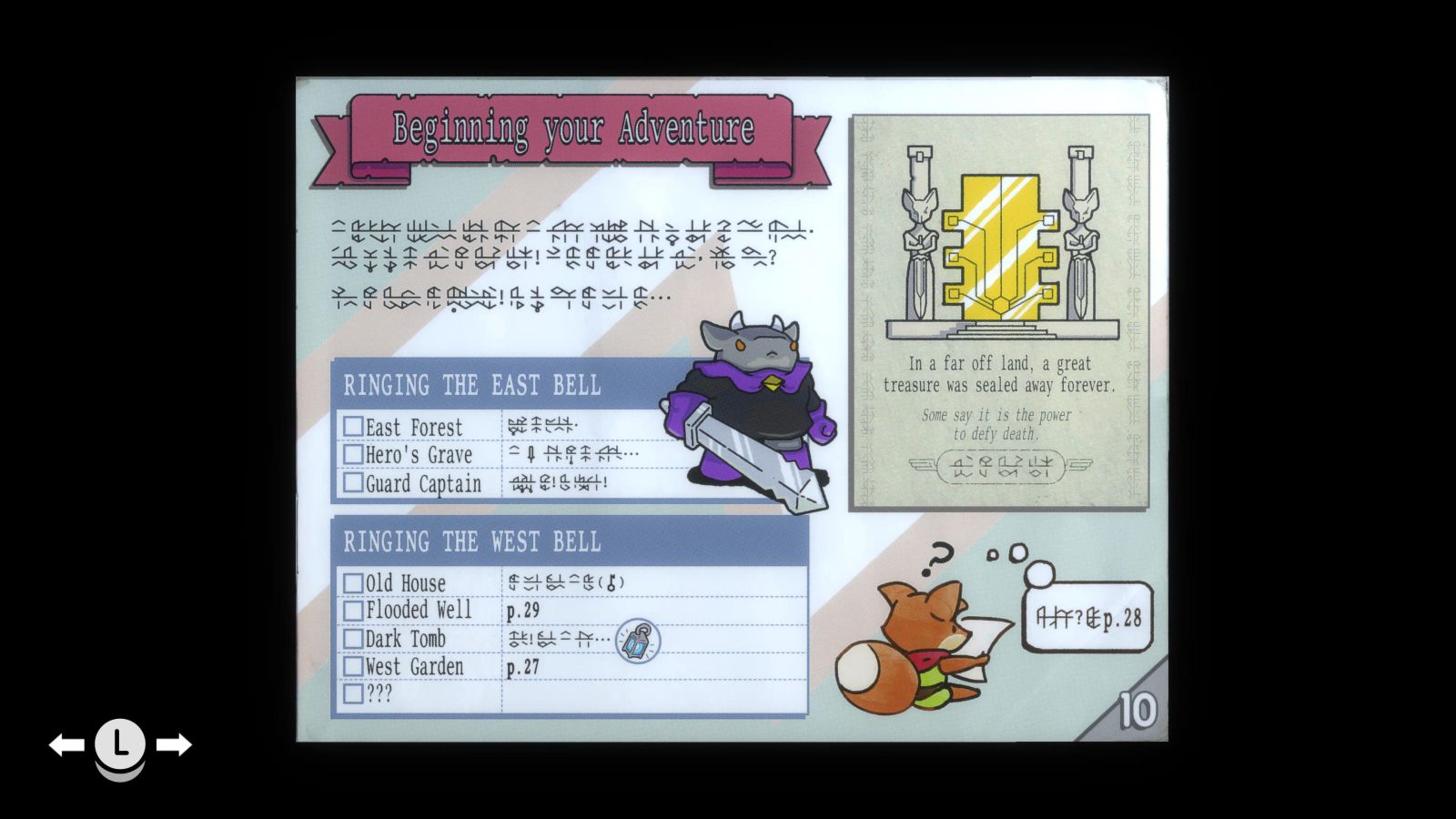 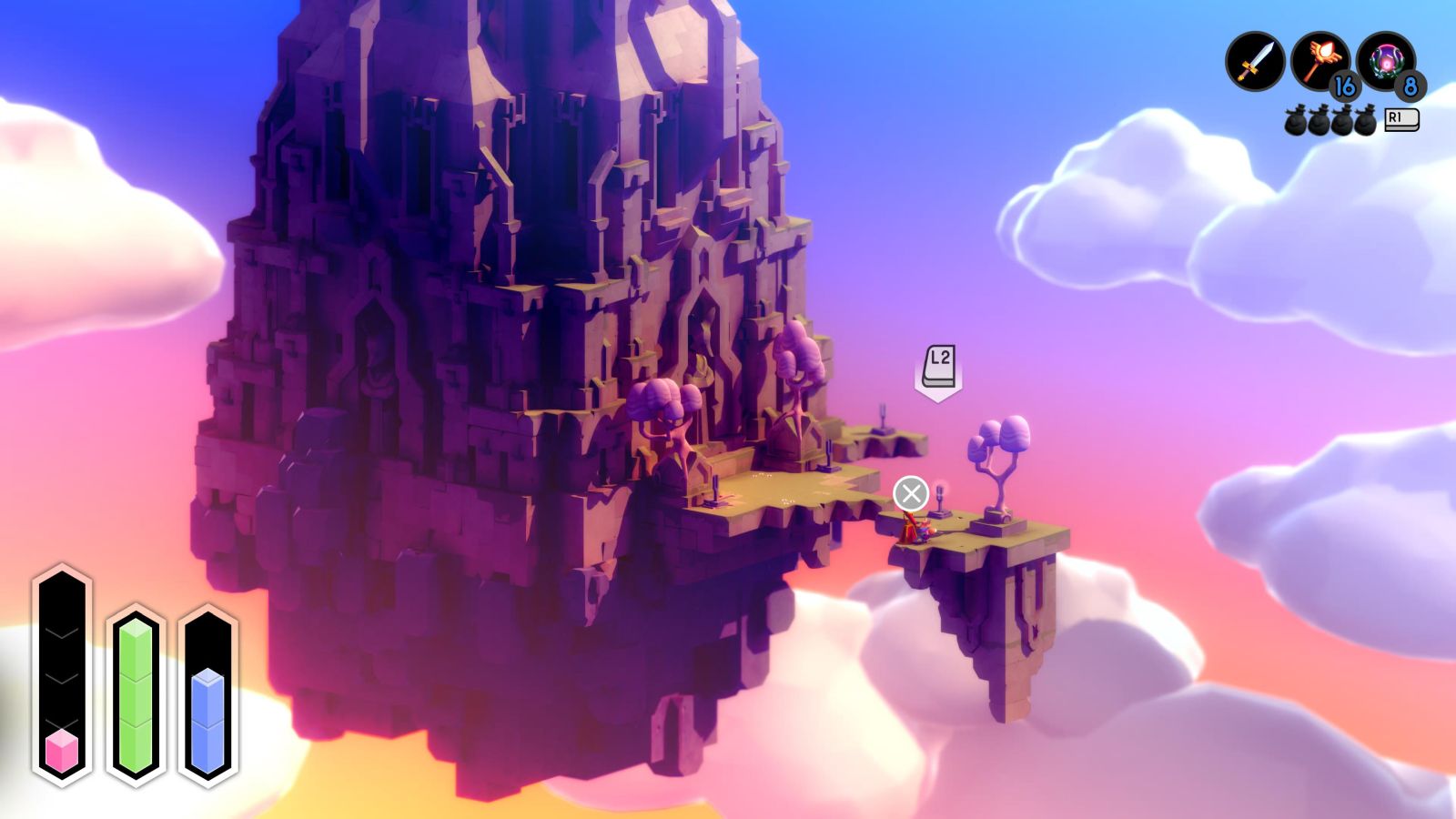 My surprise at the difficulty aside, Tunic surprised me in other ways as well. The game constantly evolves and has so much hidden underneath its simple looking surface that up until my last moments with the game I was still figuring out secrets, how to unlock sealed doors, how to save fairies, how to get the alternate ending, etc. There’s so much to do for those who want to explore, but the game is also catered to those who simply want to barrel through the adventure. None of the above mentioned side quests are necessary for completion, rather they are for further expanding this lovingly crafted world and allowing players a few more hours to explore its beautiful landscape.

Once complete, players can opt for a New Game + mode which carries over much of what you’ve unlocked, save for a couple of items which unlock through story progression, and throws in tougher enemies in key areas. I found myself jumping right into a 2nd run through the second I watched the ending, which is a rare occurrence for me and a true testament to just how much I appreciate this adventure. 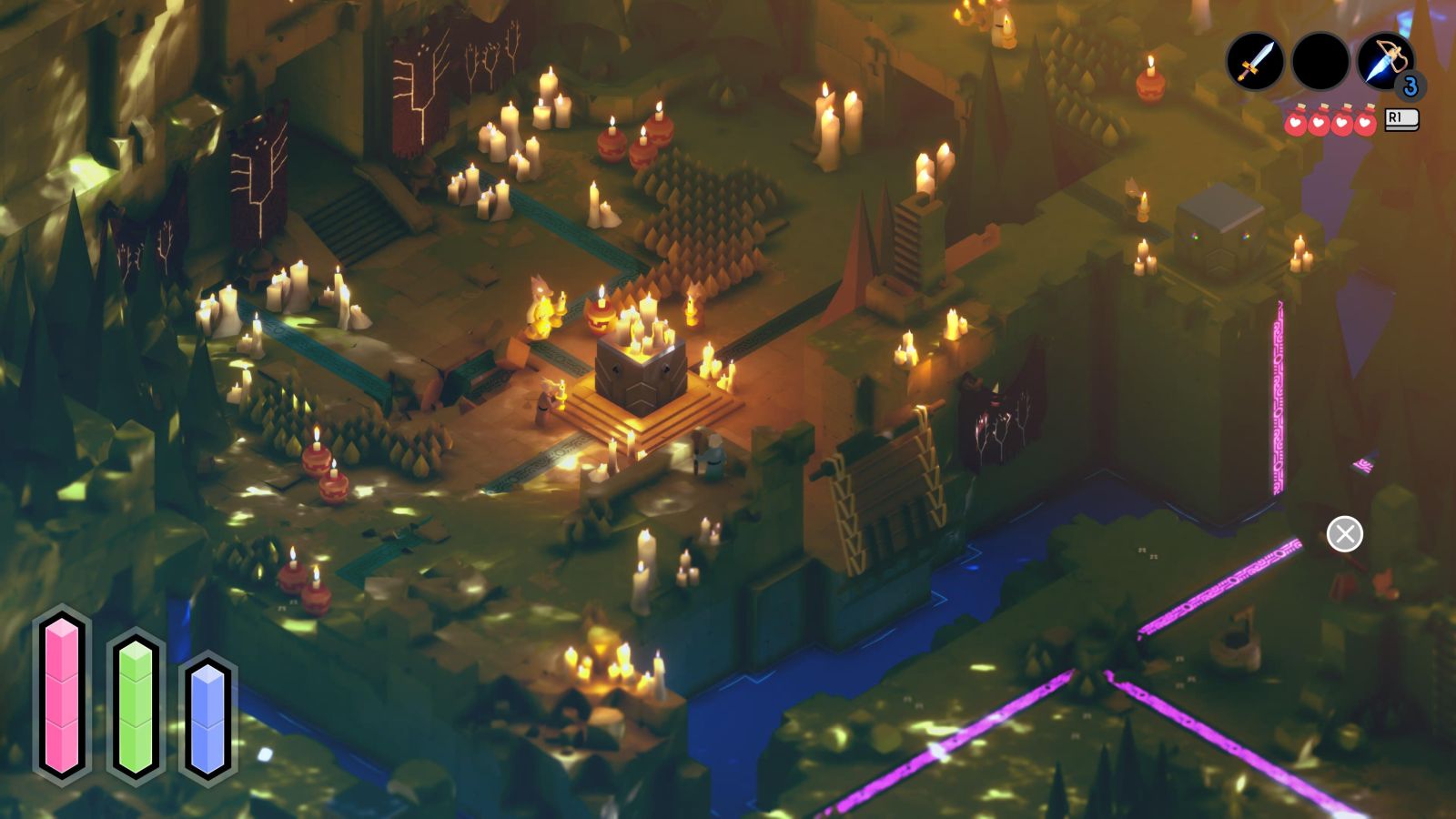 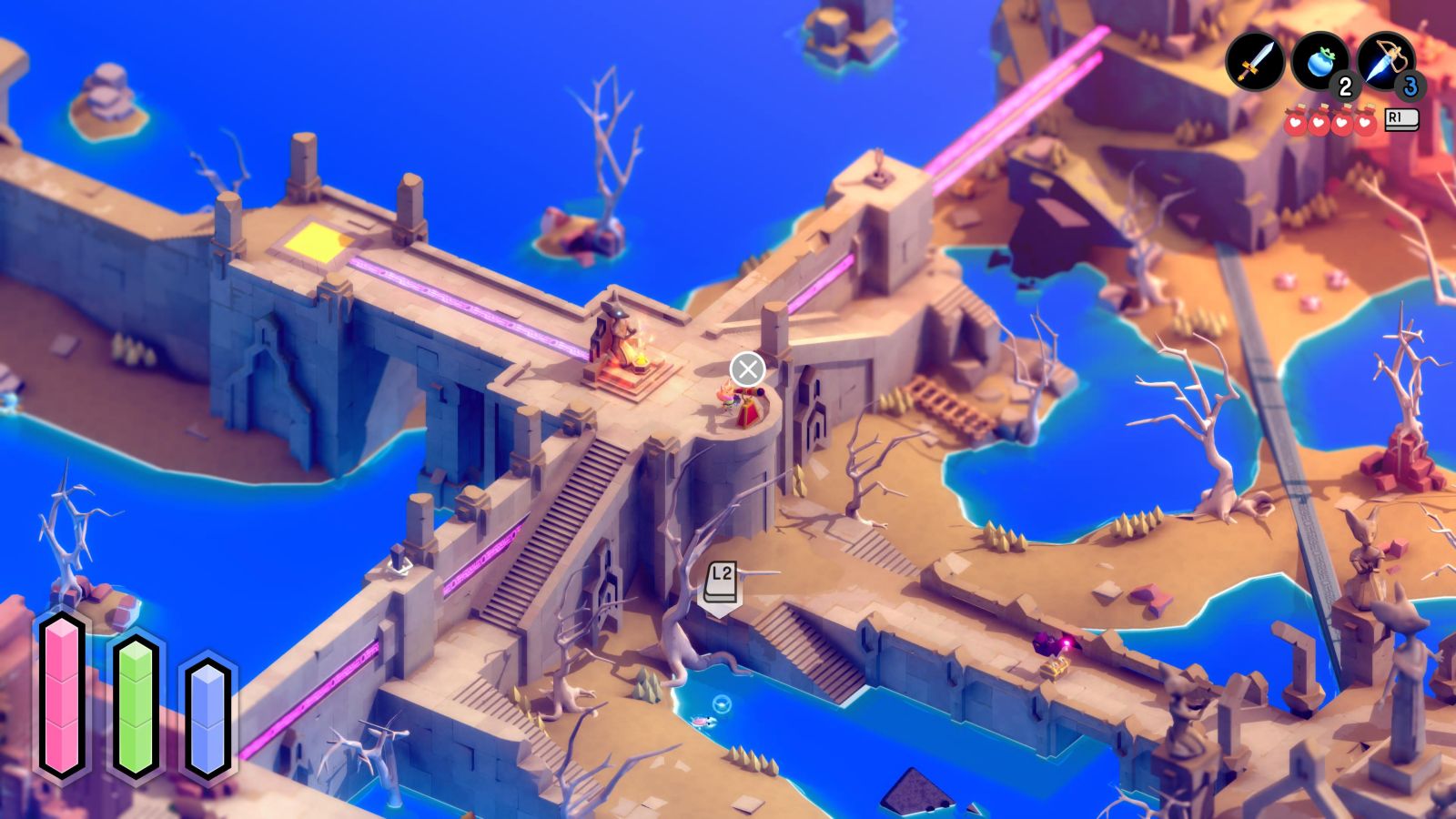 What more can I say about Tunic which hasn’t already been said? It is charming, incredibly creative, surprisingly difficult, and chock full of secrets to unravel for those willing to invest the time. Some of the secrets, the fairies especially, really test your limits on your puzzle solving skills and are endlessly creative, including having to check the load game screen multiple times to find a newly created save, load it, and then write down the path provided by the save. I honestly can’t say that I’ve seen that before and that just made me more blown away by the sheer care that went into crafting every facet of this game.

I did encounter a few small issues during my playthrough, including enemies glitching into walls, albeit rarely, and my game crashing twice right after a save. Neither significantly affected my playthrough, and will hopefully be issues that will be patched in the coming weeks.

Tunic on PS5 is fantastic. Charming level design, creative puzzles, surprising challenges, along with a lush world to explore and decipher all merge to create one of the best adventure games in recent memory. There’s so much to uncover, including multiple endings, optional side quests, and collectible trophies, along with a New Game + mode that adds further challenges, that most players will find countless hours of entertainment.

Richard Allen is a freelance writer and contributing editor for various publications. When not writing for Gaming Trend you can find him covering theatre for Broadway World, movies and TV for Fandomize, or working on original stories. An avid retro gamer, he is overly obsessed with Dragon's Lair. Chat with him via @thricetheartist on Twitter and @richardallenwrites on Facebook and Instagram.
Related Articles: TUNIC
Share
Tweet
Share
Submit