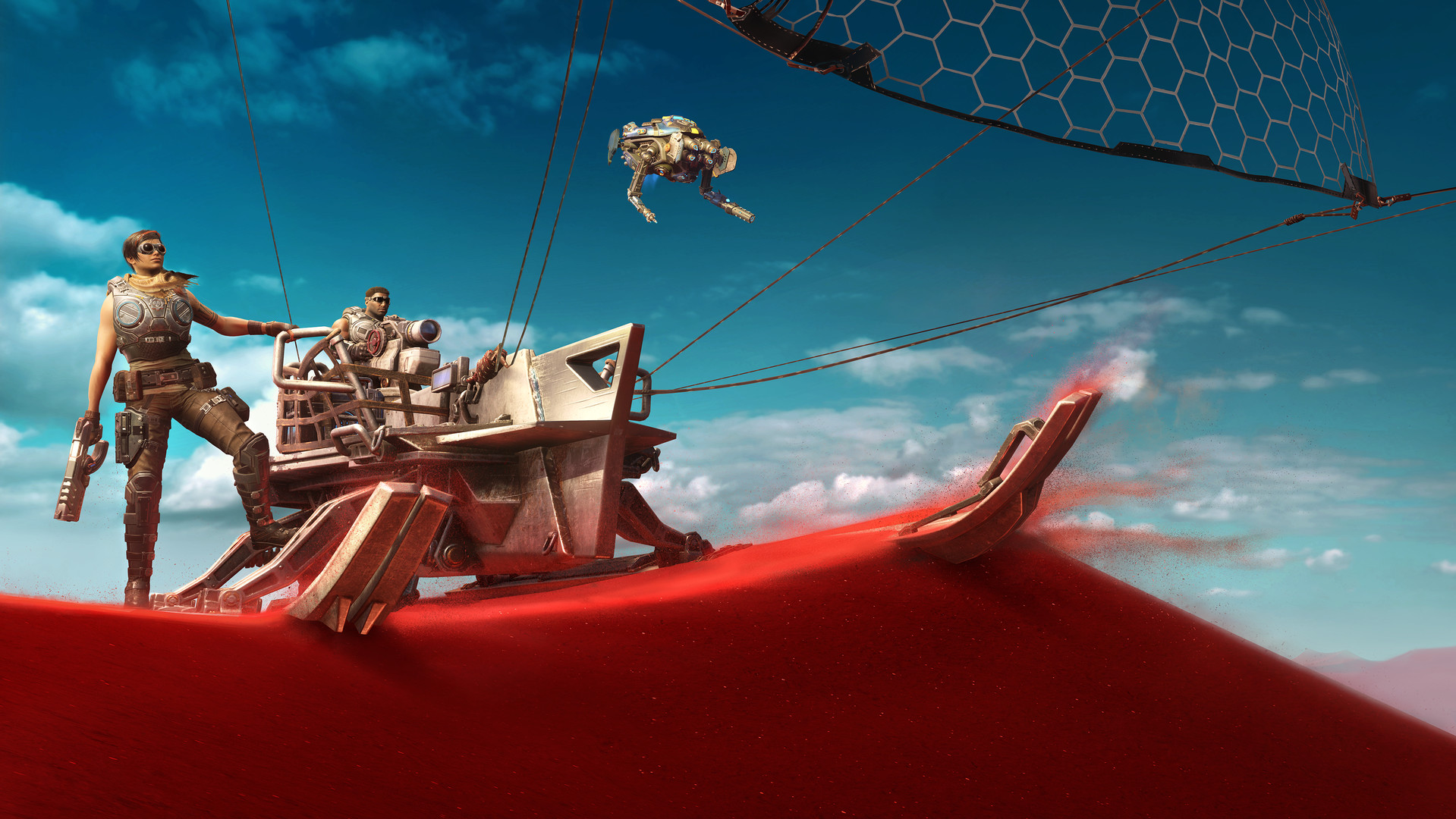 In 2016, the Gears of War franchise came bursting out of its cocoon, having been transformed into something entirely new by developer The Coalition, Xbox’s studio dedicated to the franchise. But where Gears of War 4 felt like the Coalition proving that it could make a Gears game, Gears 5 is where they turned the tried and true formula on its head to create something that still feels like the Gears of War you know and love, while also being something completely new and really special. With an excellent campaign and more multiplayer options than any Gears game to date, there’s a lot to love about Gears 5.

The story focuses on Kait Diaz, who finds herself haunted by nightmares and painful headaches after the death of her mother in Gears 4. After the first act where you play as JD, which feels a lot like a direct continuation of the previous entry, the narrative shifts and puts you in Kait’s boots instead. From there, you continue to wage war against the Swarm and go on an odyssey across the farthest reaches of Seran in search of the truth about Kait’s family and the origins of the locust horde. 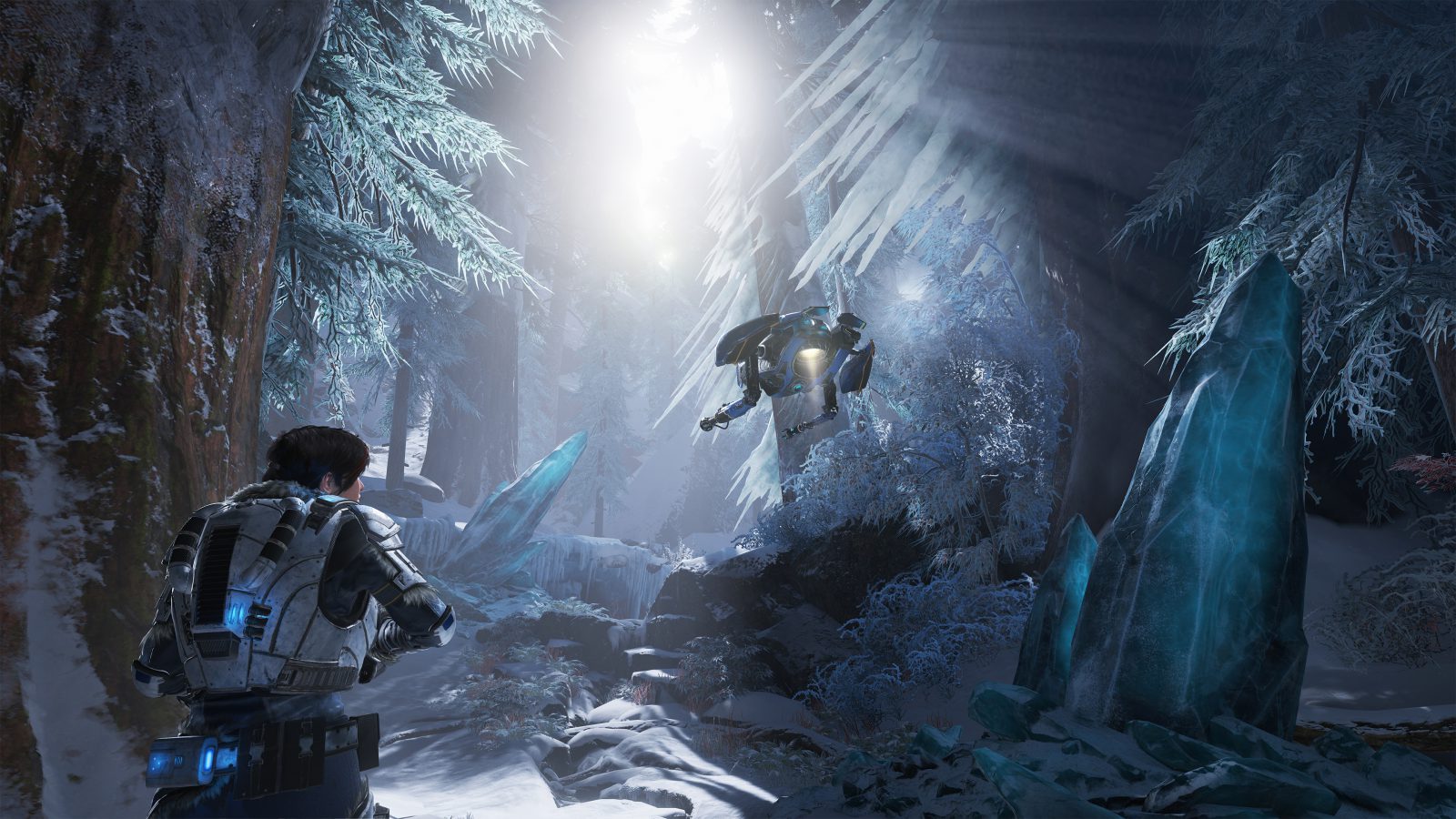 Kait’s story is personal and incredibly high-stakes, and even when it’s quite predictable to anyone who’s paid attention to the series’ story over the years it succeeds in being engaging and emotional to a surprising degree for a franchise that’s best known for sawing enemies in half. But that doesn’t mean Gears 5 has forgotten its sense of humor — in fact, quite the opposite. Early on, an entire level is dedicated to one big Hamilton reference that will leave fans of the musical absolutely tickled, and the banter between characters almost always warrants a grin — especially when the gang is dunking on series newcomer Fahz Chutani, who is just the worst.

It’s impressive that Gears 5’s campaign manages to feel like Gears at all, because it consistently does things you’d never expect from the series. Whether you’re exploring semi-open world hubs, collecting materials to upgrade skill trees, or completing side quests, you’re likely to find yourself thinking, “Seriously, how is this in a Gears game?” on more than a few occasions. And that’s a good thing. Oftentimes Gears 5 feels like it’s too good to be true and borrows things from genres typically not associated with the Gears of the past. Even in the final act of the campaign, less than 30 minutes before the credits roll, new and hugely consequential gameplay elements are being thrown at you that have never been in Gears before, and it’s as exciting as it is bewildering.

The Gears sandbox has been tweaked quite a bit with Gears 5. Active reload now only grants bonus damage for a few seconds after a successful perfect reload, but you can reload anytime you want without losing ammo, making it easier to get a perfect reload consistently — even if it means you spend more time behind cover reloading than you normally would. New weapons have been added that shake things up quite a bit, including my favorite the GL Lancer, which is a lancer that trades in the chainsaw for the ability to rain a barrage of missiles on enemies. And once again, the number of enemy types has been greatly expanded upon, which adds some interesting new challenges. For example, a new corrupted version of the “deebee” droids introduced in Gears 4 rush at you to explode in your face and crawl on the ceiling to shoot a gatling gun at you.

But out of all of Gears 5’s additions, the most important is the robot companion, Jack, who quickly becomes absolutely invaluable. Jack can be directed by issuing commands, or controlled by a player via co-op, and can do just about everything. He can open doors, hack into computers, grab weapons and ammo from the world and bring it to you, and use a wide variety of abilities that help you dominate the battlefield. He can, for example, turn your party invisible for a short amount of time, or give you an extra layer of armor that allows you to survive things you wouldn’t normally be able to. Simply put, Jack is the biggest game changer of Gears 5 and the absolute MVP in just about every way, and Gears 5 is a much better game for it. 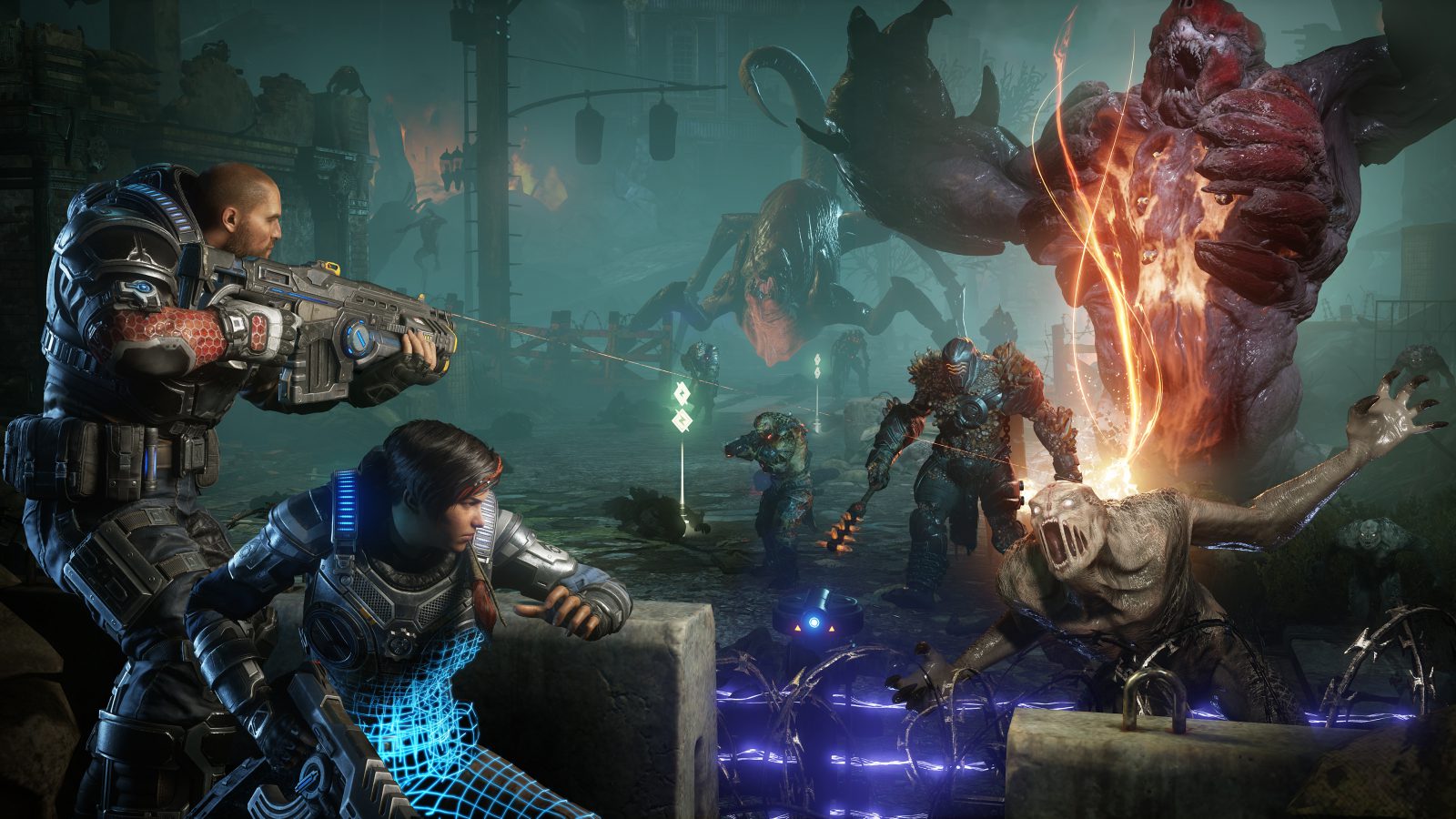 In Gears 5’s roughly 15-hour campaign, you’ll spend most of your time in Act II and Act III, which move away from the linear roots of the series and instead drop you into semi-open world hubs and let you roam free on your trusty skiff, a wind-powered vehicle that’s perfect for traversing inhospitable deserts. The open world areas, a frozen wilderness and a harsh desert, are largely empty (they are deserts, after all), but while exploring you’ll find them to hide more than they appear. Areas marked with the iconic crimson omen hide devastating “relic” weapons, which have unique perks that make them especially effective in battle. Upgrade components and other supplies are hidden throughout the world and usually trigger small scale combat encounters for those who try to claim them for their own. But most notably, areas have been filled with side quests, which provide a welcome distraction from the much more intense and lengthy main missions you’ll need to do to progress through the story.

These middle acts are the best parts of Gears 5’s campaign. Exploring and finding better weapons and upgrade materials for your robotic sidekick is a truly addictive experience. The fact that it’s all backed up by the excellent cover-based gameplay that fans know and love certainly doesn’t hurt. And with an ever-growing sandbox of enemy types and weapons to use, Gears 5 continuously finds ways to mix things up so things never get stale. For example, a plot development at the end of Act II causes the Swarm to become much smarter and more organized, which allows them to develop and utilize new weapons and armor to use in Act II. Act III does drag on a little as you spend hours in-game literally doing rocket science, which isn’t nearly as fun as you might think, but on the whole it’s more interesting and less repetitive than Gears of War has ever been, and a welcome remixing of a series that has only ever added small, incremental improvements over the years. The fact that all of this can be played in splitscreen co-op with three players on a single screen is downright impressive. 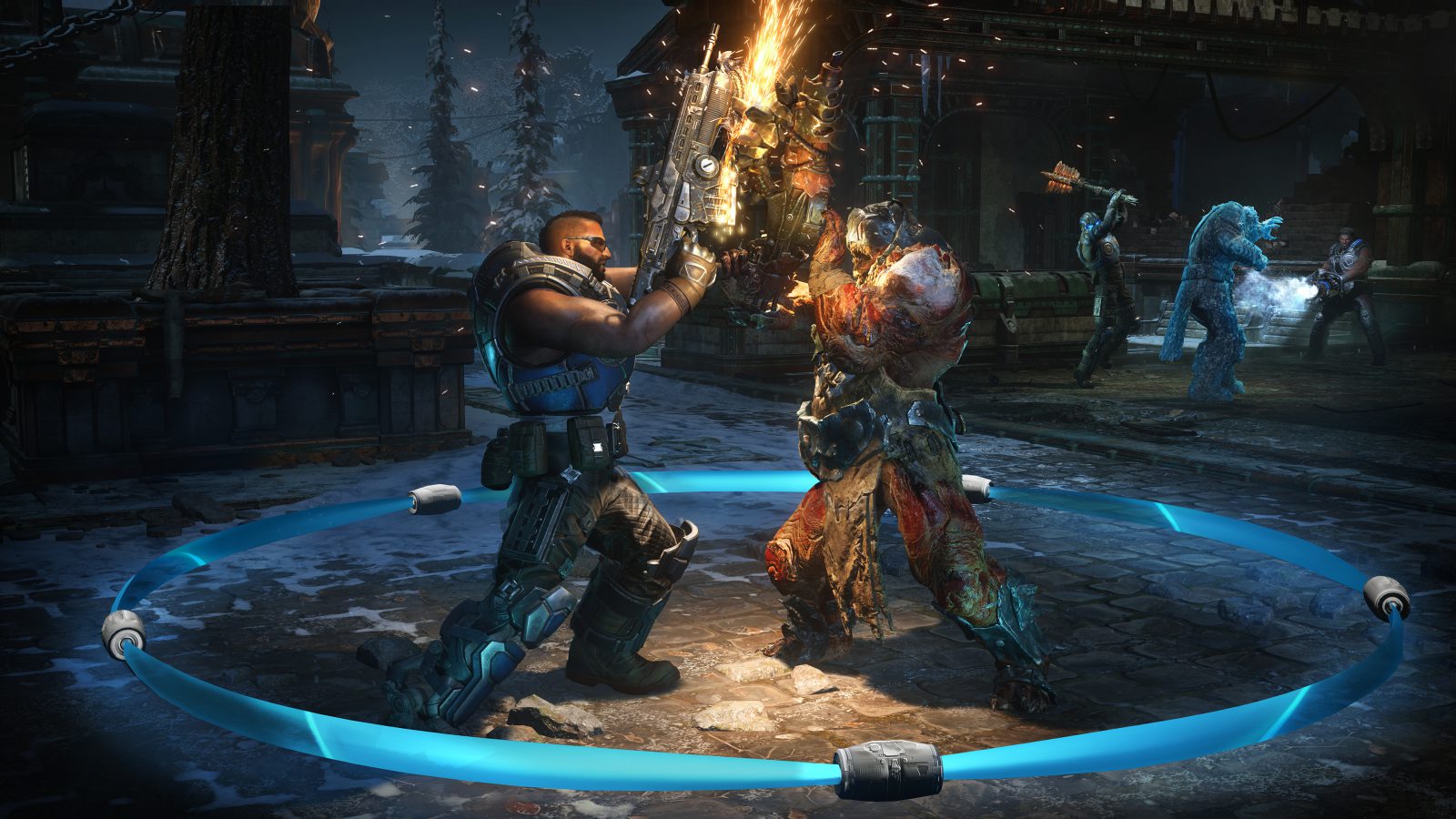 Gears 5 Versus B Screenshot

As seems to be the case with the series, my main criticism of the campaign is once again the final act is far too short and ends abruptly. Whereas the rest of the game mostly takes its time to tell the story, the last chapters of the game enter a breakneck speed and feel like a montage of big moments, none of which you’re given time to absorb. The final act also returns to a much more linear experience, and frankly it’s hard to go back to that after ten hours of playing around in vast sandboxes. Gears 5 also follows in the tradition of Gears 4 and ends at a pretty upsetting place in the narrative that doesn’t feel like a true ending. Clearly a sequel is in the works, but it’s painful to see such a dramatic and impressive story come to such an unsatisfying conclusion.

Once you’ve completed the campaign, you’ll likely spend the rest of your time with the multitude of multiplayer game modes that Gears 5 offers. From the co-op Horde mode that tasks you with defending an area from increasingly more difficult waves of enemies, to the intense, competitive versus modes, to the new cooperative run-and-gun mode called Escape, there’s truly something for everybody. Horde mode remains largely the same, with some pretty big improvements such as character special abilities and “taps” which invite players to leave their defensive positions to capture resources. The competitive sandbox has been tweaked so that gnashers are less dominant (but still very formidable), and some new modes have been added, including “arcade,” which lets you earn points to call in better weapons that magically appear in your hands. In the short amount of time I was able to play online before launch, Gears 5 seems to be yet another example of multiplayer excellence in the franchise.

It speaks volumes of Gears 5 that there’s so much to like about it, that mentioning the presentation and performance comes as a footnote, both of which are absolutely stellar. The sights and the sounds you encounter along the way in Gears 5 are truly breathtaking. When things are quiet, you get the chance to walk around a world that feels alive, whether you’re strolling through a fishing town and taking it all in, or rushing through an area that’s being ravaged by a windflare. There are occasional hiccups, like how the framerate hitches when entering a new area or while the game is saving, and how Jack seems to pop in and out of reality pretty frequently, but these issues are minor annoyances in a game that largely runs incredibly well, and looks and sounds good doing it, even when in splitscreen.

Gears 5 is an impressive evolution in the Gears of War series with a campaign that feels like a huge leap forward and a dizzying amount of excellent multiplayer modes. The story isn’t without its issues, especially the final act which I’m sure will draw controversy, but that does little to hold back this awesome next chapter in the Gears saga.

You know that jerk online that relentlessly trash talks you after every kill? That guy was probably Travis "Tie Guy" Northup. Competitive, snarky, and constantly wearing a tie, Travis has been writing his opinions about electronic media since he was a teenager, and is pretty much the only person to hold his opinions in high regard.
Related Articles: Gears 5
Share
Tweet
Share
Submit