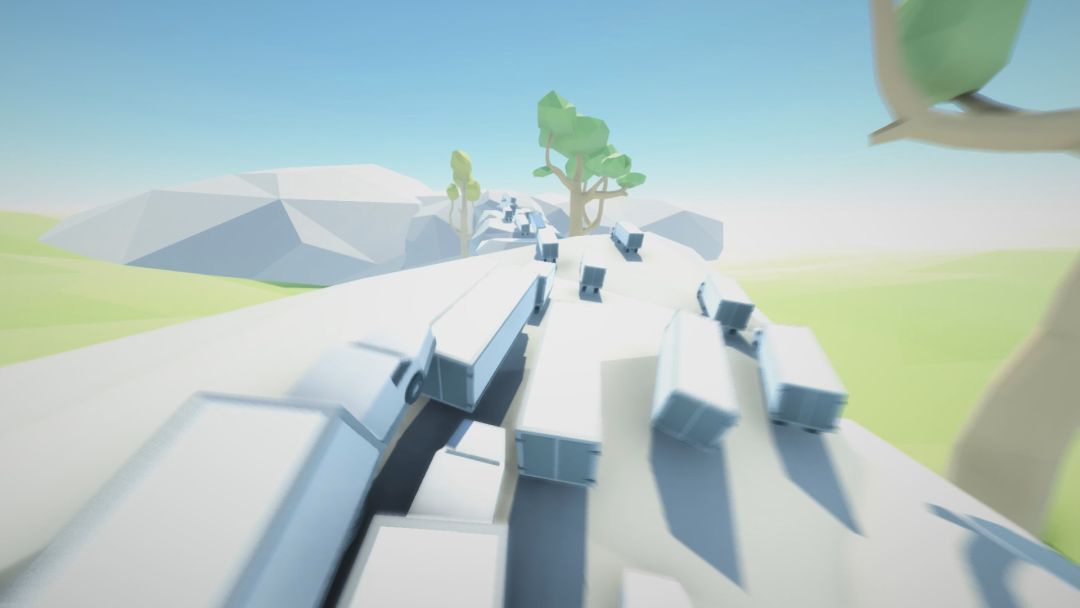 Few games are as simply entertaining as Clustertruck, a high speed platformer where you jump from the rooftops of runaway trucks. As simple as the basic premise is, Clustertruck makes great use of its ridiculous premise to create a fun, goofy experience that’s equal parts challenging and satisfying.

Clustertruck’s controls are simple to use, and as a result, feel like the most natural parkour game I’ve ever played. While you can unlock new abilities as you progress through the game, such as a time-slow power or a jetpack, the controls are mostly based around running and jumping, to the point that every level can be completed without any of the unlockable special powers. The goal of the game is quite simple as well: stay on the trucks until the end of the level, and increase your score by doing tricks, staying in the air for long periods of time, and finishing as quickly as possible. Fans of games like Skate will feel right at home in Clustertruck, as the online leaderboards allow plenty of friendly competition.

In Clustertruck, chaos is the order of the day.

While you might be tempted to avoid Clustertruck because the premise seems a bit dull, you need not worry. As deceptively simple as the controls are, the levels are amazingly well designed, and experiment with the game’s central mechanics in increasingly twisted and challenging ways. For example, the beginning levels are relatively straightforward obstacle courses, where you jump from truck to truck avoiding environmental hazards, but later levels force you into crazy stunts such as trucks going the opposite direction, falling objects, or even a second level of trucks you need to reach by jumping off a bridge, falling a story, and changing directions.

As entertaining as Clustertruck is, it’s still a very difficult game, and you’ll find yourself stuck on plenty of challenging levels, which are made more manageable because of how quickly you rejoin the fray, mere seconds after each death. One of the game’s most triumphant successes is the flow of gameplay, and the fact that deaths and between-level transitions take only fractions of a second only add to the game’s brand of addictive fun.

Clustertruck’s gameplay may be thrilling, but the visuals aren’t nearly as interesting.

However, despite all the fun to be had, there are quite a few areas that could have used a bit more polish. The visuals are pretty dull, with all in-game objects textured only with solid colors. While the visual style works in its consistency, most levels feel like little more than an endless, single-colored expanse with a few obstacles dotting the landscape, and this only gets worse in levels with floating platforms. The soundtrack is also pretty underwhelming, to the point where you’ll probably forget it’s there most of the time, as are the menus, tutorials, and level creator, which are about as bare-bones as they come. Because of the lackluster presentation, Clustertruck almost feels unfinished at times, like a proof-of-concept for an admittedly really fun gameplay mechanic.

Also, you’ll find several levels that you can completed in easy-but-boring ways, such as finding a specific truck and staying on the front of it. In some of these levels, Clustertruck has a few simple if inelegant ways to prevent such tactics, such as dropping a massive rock the size of the level on your head if you don’t move fast enough. While techniques like that work for moving the player forward, the sudden way many of them are introduced feels awkward at best, and it can be irritating to lose a level at the last second just because you were playing it a different way than the developers intended.

Conclusion: Clustertruck is an addictive, fast-paced parkour platformer with great controls and a ton of challenging levels to race through. While it lacks a polish in some crucial areas, it’s easy to recommend this game due to how simply fun it is.