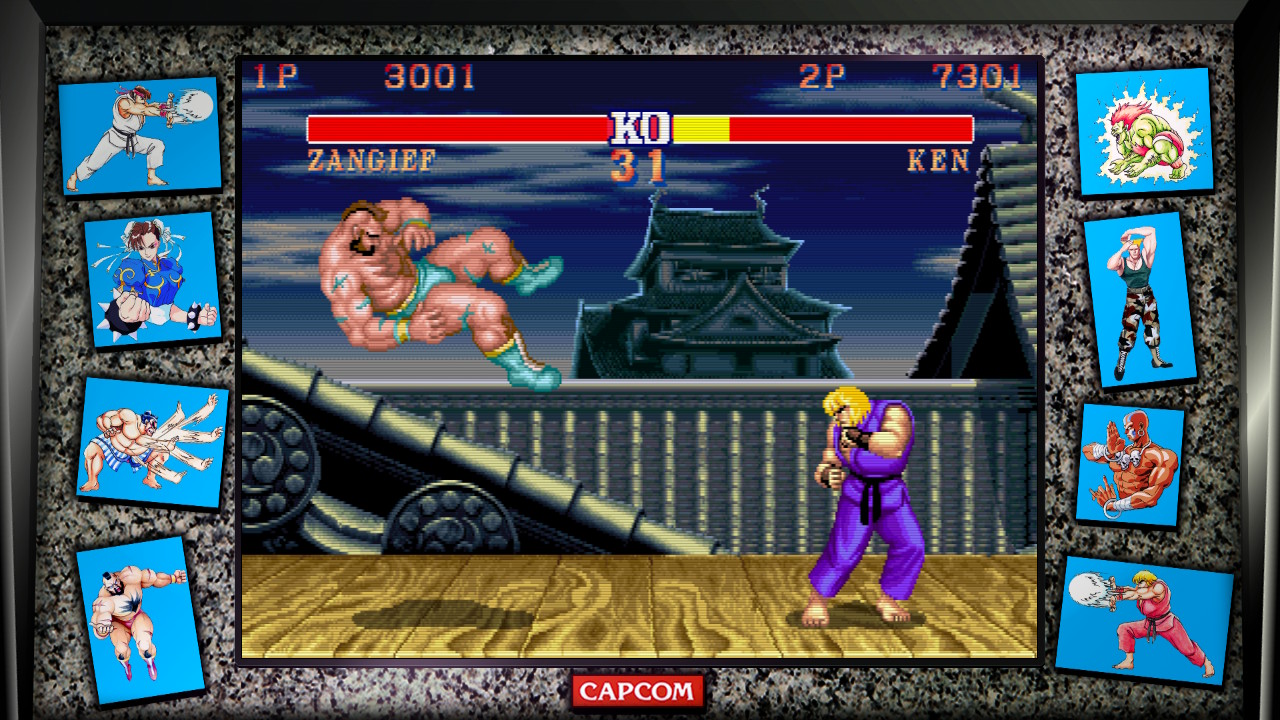 Fighting games have come a long way in the past thirty years. It’s hard to believe that even through the revolution of 3D graphics and arena fighters, the 2D fighter is still the most popular fighting genre. Arguably, one of the biggest influences on the fighting game genre has been the Street Fighter franchise and the Street Fighter 30th Anniversary Collection is a great way to celebrate the series’ history.

First of all, when you start the game, you’ll immediately realize that there isn’t the standard “select your game” screen that is usually in collections like this. Instead, the games are completely integrated within the main modes. When selecting Offline and Versus, you’re then taken to a list of the all twelve games in the collection. After selecting a game, you choose the stage from the next screen, still within the collection. Finally, you’re quickly booted into that game’s character select screen almost instantly.

Each game plays incredibly well both docked and handheld. There are even options to turn on a “TV” filter, an “Arcade” filter, and borders on the sides featuring characters and art from each respective game. At the game select, you even have the option to change Street Fighter II Turbo Edition’s and Street Fighter Alpha’s speed from the game select menu. The most incredible thing is how smooth the experience is. Selecting a game is incredibly similar to selecting a stage in any other fighting game, and selecting “no” on the rematch screen brings you back to the game select screen. This means you and your friends can hop around to different games with minimal effort.

Arcade mode has its own category as well. If you missed seeing the title screens of each game, they appear when you select arcade mode and that game. Each mode has its own ranges of difficulty and even includes the ability to use save states to brute force your way to the final bosses.

Four of the games in the collection will be playable online: Street Fighter II Hyper Fighter, Super Street Fighter II Turbo, Street Fighter Alpha 3, and Street Fighter III: 3rd Strike. Online isn’t just ranked and casual matches, as players can also join lobbies where players will vote on which of the four games they want to play each match while other players in the lobby spectate. There is even an option to select input lag while playing online.

One of the most interesting additions is “Online Arcade.” In this mode, you play through a standard arcade mode in one of the four online-enabled games, but occasionally you’ll be “challenged” in the middle of your match, taking you to a new fight with a real player. Immediately after this fight is finished, you’ll be returned to Arcade Mode to continue where you left off. All of these matches are ranked, making it a good way to pass time while waiting for more ranked matches.

To help players prepare for online, training mode has been added to Hyper Fighter, Turbo Edition, Alpha 3, and 3rd Strike. This mode includes several options such as health options, special meter options, the ability to turn off stun, damage display, and input display. This is a welcome addition to these four games, but I wish it were available for the other 8 as well.

Lastly, there is a very robust museum in this game. The museum contains, but is not limited to, a complete timeline of every Street Fighter game released (including information on the infamous Street Fighter 2010: The Final Fight game and the Street Fighter movie), a music player with every track from the games featured in the collection, concept art, and detailed information on every character. Included in the character bios each frame of the sprites for each move including the grid each character takes up.

This collection isn’t perfect, of course. Since it is the arcade version of all of the games, each game will lack any console-edition bonuses such as the extra characters for Street Fighter Alpha 3. It also doesn’t contain the special Dramatic Battle mode that was Ryu and Ken vs M. Bison in Street Fighter Alpha. But otherwise, Digital Eclipse has recreated a true arcade experience for their collection.

Street Fighter 30th Anniversary Collection is one of the best collections we could have received for classic Street Fighter games. While the lack of home-version bonuses may be disappointing, the ease of access for match making and the experience of running through arcade while being challenged online is thrilling. At the same price as Ultra Street Fighter II: The Final Challengers, this is a great deal for an incredibly collection.

Street Fighter 30th Anniversary Collection changes how we view game collections by making the match making experience streamlined instead of having us go to each game individually. The museum has an incredible amount of care put into it with even the concept art of the first game available to look through. Digital Eclipse has outdone themselves with an incredibly humbling anniversary collection.

Sean Anthony likes to combine two of his passions: gaming and writing. Gaming has been a huge part of his life ever since he played his first game as a child, Kirby's Adventure. He aspires to have his name attached to an article that makes the whole world go, "Huh, that's neat, I guess."
Related Articles: Street Fighter 30th Anniversary Collection
Share
Tweet
Share
Submit