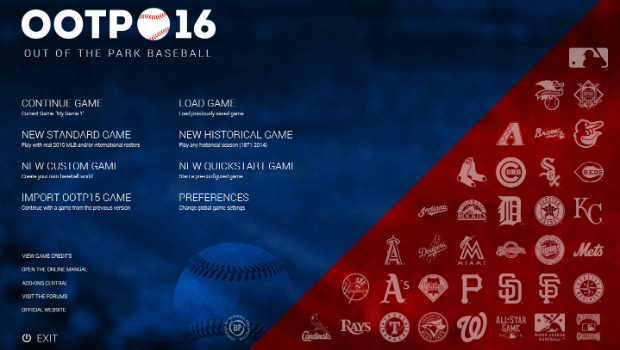 Some fans root for the Giants, and some root for the Royals.  There are those who languish fandom upon the San Francisco Giants for their progressive approach to the game and the star-studded cast of characters they are able to present, and those who instead root for the Kansas City Royals tend to relish in the history of the game, and get excited about time-tested fundamentals over flashy modern frills.  Out of the Park Baseball also relishes in the incredibly deep history of America’s once favorite pastime, and most definitely displays a focus of fundamental game development over the modern frills of the on-the-field action sport titles.  Out of the Park 16 is the gold standard for sports simulation, just as the Royals are the gold standard for old school fundamentals in an era of hard-hitting, fast-pitching teams. Just like that poor Kansas City squad lost their chance to boast as champions, Out of the Park Baseball 16 will never get to say it’s the best baseball game around.  Being the best in your niche is enough to be celebrated, and that’s what this article intends to do.

So what is all this hype you’ve been hearing in social circles about sports simulation?  Well, the truth is sports simulation is what it sounds like.  Rather than player or team, you take on the role of general and team manager for a baseball team, making the meta-decisions as you try to develop young talent and win championships.  Out of the Park Baseball 16 is no different.  OOTP 16 allows you to take control of a team, either in the MLB or in a litany of additional leagues from around the globe.  This year’s game is the first to carry the official license of the MLB and the Major League Baseball Players Association, and thus has all of the major and minor league teams, players, logos, and staff.  The game still boasts a deep customization option for molding teams, leagues, and the entire world of baseball to your liking, and also offers a good amount of user-created files for sampling other’s creativity.

Gameplay is incredibly simple but also deeper than can be described in article form.  You are the manager, both in the decision making room and in the dugout on game days.  Most of your time is spent looking at lineups, studying stats, reviewing progress and regression of players, and making the right moves to win and improve.  Unlike many sports simulators, which seem to develop players on a linear path, OOTP 16 allows players to blossom based on a mixture of performance and potential.  Putting the work in can allow you to mine an unproven player into a superstar with the right decision making, and can also tell you when to pull the plug on a player when their time is up.

On game days, you can choose to control the “action” on the field in a few different ways.  If you want to play each game out, pitch-by-pitch, you can do so.  This is time consuming but you are able to make the meta-decisions that a real manager would make.  Playing this way allows you to craft an overall game plan for each individual inning.  If you don’t care to play the games, there is a super-sim option that plays all games in the background while you make changes and review information as it comes in.  This simulation can be done at high-speed, or in real-time, second for second.  This is an incredible way to play simulation.  One can get up, check the game schedule, head to their job, come home and see how the team did and make a few changes as they see fit.  Pacing is a very important part of playing simulation games, and OOTP 16 gives the players the full spectrum of options for how fast or slow they want the game to play.  Either way you play, the game is pure simulation.  Those who are seeking action will not find it here.

Your general manager duties don’t extend to stadium, concession, or other aspects of the game that other simulators offer, but it isn’t something that you’ll notice not having control of.  Due to the game’s freedom of customization there is no “relocate the team” dynamic that could be a fun addition.  Both of these represent ideas that would add to the overall experience of the game, but their absence does not detract from the overall quality.

All of the menus are well laid out and easy to navigate.  Making changes to your team are simple to perform and understand as well.  When you start a game you can choose the amount of leagues available in your world, and even though you’ll be in just one, you are able to keep up with the full scope of information for each individual team and league just as your own.  Getting offers to manage in a Japanese league?  Take the opportunity to read the stats, news stories, personality descriptions of players, and any other important information before boarding a plane to the Land of the Rising Sun.

One aspect of OOTP Baseball 16 that has been a stalwart of the series is it’s lack of fear in embracing the darker side of baseball and sports in general.  Players can get into fights, fail drug tests, have car accidents, and do other stupid things that generally put them in hot water with their teams.  It is never overt, unrealistic, or overbearing, but it does represent that one further step towards realism that the major sports titles have all but whitewashed away.

Out of the Park Baseball 16 is the perfect game in it’s genre, and earns its rating thusly.  There is no template that could better mold a sports simulator than the Out of the Park series, and this latest release is the best yet in an ever improving game.  While the rating implies finality, and no room for improvement, it is a safe bet that the team at Out of the Park Developments will find a way to build on this excellent release.

Out of the Park Baseball 16

Out of the Park Baseball 16 is the gold standard of sports simulator games, and can provide gamers with infinite hours of fun and deep gameplay.

Patrick Rost has been with Gaming Trend since 2013. At first focused on sports coverage, Patrick has gone on to cover a wide range of games and other products for the website. Outside of Gaming Trend, Patrick writes and records music, grinds perpetually in Elder Scrolls Online (PS4), and lives day to day with his two dogs, Bob and Stella.
Related Articles: Out of the Park Baseball 16
Share
Tweet
Share
Submit