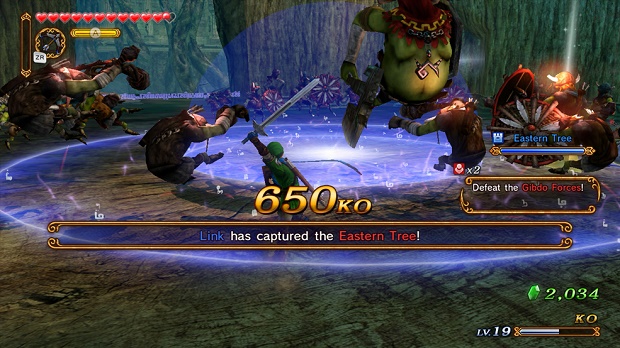 Hyrule Warriors is really, truly, fantastically stupid. And it’s some of the most ridiculous fun I’ve had with the Legend of Zelda series in years.

Let me back up for a minute here, because I’m sure your eyeballs are spinning around in their sockets after reading that. The Legend of Zelda games, even in their most bloated forms (looking at you, Twilight Princess and Skyward Sword) are great adventures, and some of the best games ever made. Hyrule Warriors is not the best game ever made, not by a longshot. But its goofy charms and complete willingness to go completely and utterly bonkers with the typically serious and sterile series turn this weird mashup into one of just pure, unadulterated fun.

Let me back up a little bit more. Hyrule Warriors is a strange combination of two different, yet massively popular franchises: The Legend of Zelda, and Dynasty Warriors. You’d think this would go together terribly, like peanut butter and blood sausage, but honestly, it’s a better fit than I originally gave it credit for.

The plot of Hyrule Warriors is so stupid, almost unbelievably so. An evil, scantily clad sorceress named Cia is trying to steal the Triforce pieces and rule over Hyrule because… she can’t date Link? Basically, she noticed that his soul is inexorably entwined with another (hint: her name is in the title of the series), and she goes on an evil rampage. Ganondorf also shows up as he does, trying to beat the heroes and take control of the world. Gateways have opened up to multiple timelines, threatening to destroy the world (or something), and Link, Zelda, Impa, Sheik, and a whole host of other characters band together to seal the gates for good. The whole affair is a thinly veiled attempt at fanservice, bringing the worlds of The Ocarina of Time, Twilight Princess, and Skyward Sword into one plot thread. It’s really best not to think about it all, and just let it wash over you. You’ll be way better off.

Plus, Cia and (to a lesser extent) newcomer Lana both sport hyper-sexualized designs—Cia especially, as she wears a giant metallic bikini-thing, her heaving bosoms barely being covered. It’s an odd juxtaposition, as these characters (clearly designed by the boob-focused Team Ninja) stand next to the far more subdued (and quite tastefully done) female cast of the actual Zelda franchise. Speaking of the female cast, most of the playable characters in Hyrule Warriors are incredibly powerful women, which is awesome—and it makes the portrayal of Cia that much more baffling. It’s not too distracting, and compared to other Team Ninja games (*cough Dead or Alive: Xtreme Beach Volleyball cough*), it’s rather tame. It’s just… weird.

Hyrule Warriors’ gameplay is also bonkers, though it fares much better than the plot does. Like other titles in the Warriors series, Hyrule Warriors pits you against a legion of enemies who pose little to no threat to your well-being, while throwing in stronger generals and boss fights to actually challenge you. Most foes can be dispatched by mashing the attack button forever, though you can change things up with multiple combos and special attacks.

If there’s one thing the Warriors series can be called, it’s mindless, and Hyrule Warriors is no exception, though the little additions really help keep things from being a boring slog. As you make your way through the (quite numerous) levels, you’ll have access to a wide array of Zelda items. Bombs, arrows, the hookshot and the like are at your disposal, which actually change up the formula considerably. Hidden secrets are revealed by bombing suspicious rocks or walls, and certain bosses can only be taken down by studying their movements and responding with the correct weapon. Combat is fast and frenetic, and quickly dodging around enemies to attack them from behind, or exploiting the right weaponry feels exciting, even if it’s still feels somewhat shallow—make no mistake, this is still very much a Warriors title.

The upgrade system helps to flesh things out a bit more, using various materials dropped from vanquished foes. These items can be used to upgrade Link and friends’ abilities, letting them use multiple potions per level, increasing their combo length, or shielding them from specific elements. You can also find and combine weapons to transfer skills and increase their strength. Many of these additions rarely feel truly necessary, and they don’t exactly change how you play the game (other than increasing the amount of times you can press the Y button in a row before your combo ends), but they provide an additional incentive to keep playing its levels over and over again. And once you beat the game, additional difficulty levels open up, which increase item drop rates—almost turning Hyrule Warriors into this weird, button-mashy version of Diablo.

In addition to the story, there’s a whole Adventure mode waiting to be explored. This mode breaks up the standard action into smaller chunks, requiring that you defeat a certain amount of enemies under a time limit, or achieve other specific objectives. You access each level from an overworld that looks like it’s been ripped from the NES Zelda game, and beating them grants you additional upgrades, new characters, and unlocks new levels to complete. It eschews the silly story for a far more focused approach to its gameplay, and while it doesn’t change the game up drastically, it’s still a fun way to get even more out of the game.

So, no, Hyrule Warriors isn’t perfect. Its story is ridiculous nonsense, and while it does a lot to change up the long-stale Warriors formula, it’s still very much a mindless hack-and-slash. Even so, I couldn’t help but enjoy myself in what is likely the best game in the Warriors series in a long, long time. Hyrule Warriors is pure fanservice, and I wouldn’t have it any other way.

It's certainly not perfect, but Hyrule Warriors' combat and treatment of the typically sterile Zelda franchise is just big, dumb, loud fun.