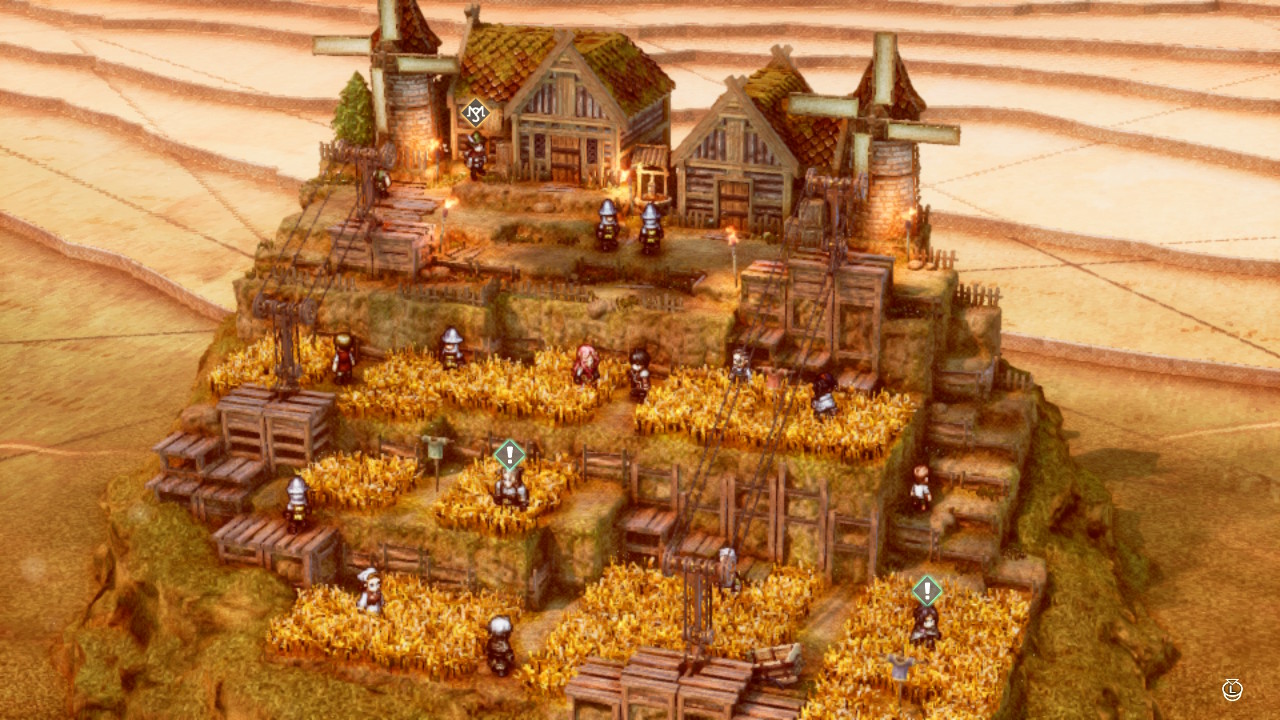 Twenty years after the SaltIron War, Norzelia is finally at peace. The nations of Aesfrost, Glenbrook, and Hyzante have reached a delicate accord, agreeing to share their key resources with each other. To commemorate their peace, the three have begun a grand project in the form of the Grand Norzelean Mines. However, shortly after the mining begins, Aesfrost invades Glenbrook and easily kills their king. As the new Lord of House Wolfort, a vassal of Glenbrook, Seranoa finds himself directly in the center of another war spanning the entire continent. Can the young noble protect his small domain from the fires of war, let alone restore his kingdom to glory?

Triangle Strategy follows in the footsteps of Final Fantasy Tactics. It’s a strategy RPG with a political story taking place in a rich world following a cast of colorful characters. Battles take place on a grid, with you commanding your units to move around the battlefield, attack foes, and more. Each unit has different abilities and situations they excel in such as the number of tiles they can move, how high they can climb, or how many times they can act in one turn. It’s fairly standard fare for the genre, and those who have played games like Fire Emblem will feel right at home, but that’s why it’s so enjoyable. After all, why fix what isn’t broken? Just add a bit of unique spice on top.

That spice comes both in the form of the aforementioned units and the battlefields themselves. Instead of a class system, each character is entirely unique – for example, only Geela can greatly heal single targets and what Benedict lacks in offensive prowess he makes up for in a wide array of buffs. This leaves the main cast fairly small, numbering about 8, but you’ll get new units throughout the story to use as you see fit. You can only deploy a few units in each battle, and only those who act will gain experience, so you have to choose who you want to use wisely, especially seeing as there isn’t enough EXP to be gained through the main story alone for most of your units to be ready for the next fight. It can be a bit frustrating, but thankfully you retain experience even after a game over so you can quickly level units you haven’t used in a while

This same judgment must be used on the battlefield, as positioning and terrain are of utmost importance. An archer will be more effective from a high perch, while most attacks become critical hits when hitting a target’s rear. Additionally, if you surround an enemy from both sides your two units will be able to aid in the other’s attack resulting in tons of damage for every action. Of course, your enemies can do the same to you so you need to make sure not to leave yourself open while accomplishing the map’s objective. All these different mechanics add up to make a highly enjoyable battle system that’s still engaging even if you’re terrible at the genre. 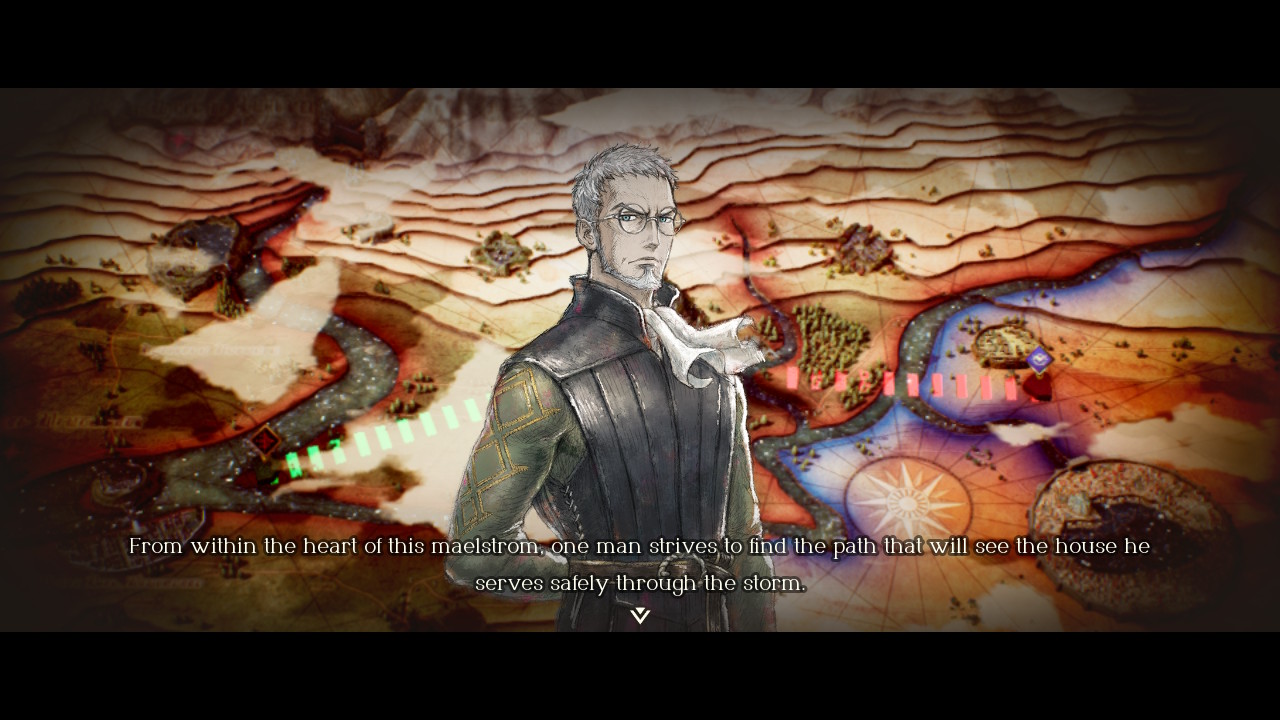 Between battles, you’ll watch events unfold across Norzellia through fully voice cutscenes. Said voice acting can be all over the place and cutscenes can go on for far too long, but all the plot’s twists and turns are a joy to watch. What’s more, you’ll occasionally be asked to make choices that slightly change the course of the story. You don’t make these decisions yourself, however, instead your closest advisers vote on a course of action using the Scales of Conviction. They place their tokens on the scales and whichever choice receives a majority vote is taken. While they have their own convictions (which is really what the game should have been called), you may be able to bring them over to yours by persuading them through dialogue options before the vote. Sometimes your words won’t do anything, and other times you may need some information gleaned earlier in the story or by talking with townspeople in exploration segments, but it always leads to an interesting conversation that fleshes out the core cast.

Persuasion was my favorite part of Triangle Strategy, but it’s worth noting that it can feel like your decisions don’t actually matter a few times. I never failed to bring a majority of the characters to my side, which makes the mechanic a bit less interesting than intended, but more than that there are times where some very different choices feel like they lead to the same outcome. For example, when retaking a certain town I chose to go a stealthy route so as not to damage the town itself in the fighting, however when the dust settled the town was still essentially destroyed. Granted I have only been able to play through the game once, so other choices might have more disparate results, but it’s worth noting all the same. 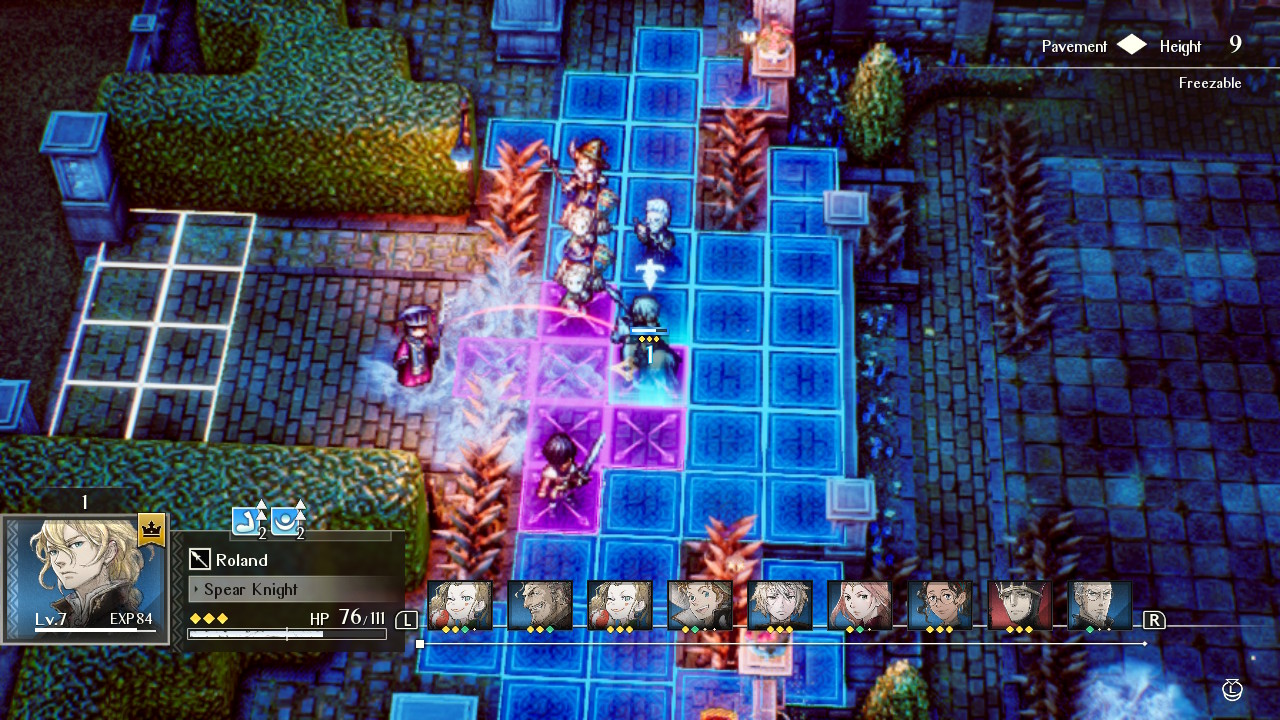 As mentioned previously, the story can be VERY long winded at times, with upwards of an hour between fights or any interaction with the game at all. The voice acting goes for a bit of a Shakespearean slant to it, complete with ye olde words such as Demesne and Gaol, but it has some hit or miss moments. The best example of this is Seranoa, our main character – he sounds fine most of the time, but has a few lines where he sounds completely disinterested in what’s going on. Conversely, the actor absolutely nails some more emotional scenes making you really feel for the character. The most consistent is Benedict, who always sounds confident, cold, and calculated, but can be gentle when the time calls for it. There’s no performance that’s outright bad in the game, just some moments of weirdness that can take you out of it.

On the other end of the spectrum, Triangle Strategy, much like Octopath Traveler before it, is a visual triumph. It brings pixel art back to the AAA space and utilizes the technological leaps since it was in fashion to enhance the artform. The sprites all look fantastic, as do the environments and lighting, but I do think the bloom is a bit too strong and can overwhelm some of the details on characters especially. In addition, I found the music to be great in the moment, but didn’t find anything I would actively seek out to listen to – a rarity for SquareEnix.

Triangle Strategy boasts a deep story with an involved battle system that remains fun throughout and approachable to those who might not have a strategic head. The cutscenes can be overly long and choices don’t have as big of an impact as they should, but it’s still a great strategy game that you can really sink your teeth into.

David is the kind of person to wear his heart on his sleeve. He can find positives in anything, like this is a person who loved Star Fox Zero to death. You’ll see him playing all kinds of games: AAAs, Indies, game jam games, games of all genres, and writing about them! Here. On this website. When not writing or playing games, you can find David making music, games, or enjoying a good book. David’s favorite games include NieR: Automata, Mother 3, and Gravity Rush.
Related Articles: Triangle Strategy
Share
Tweet
Share
Submit