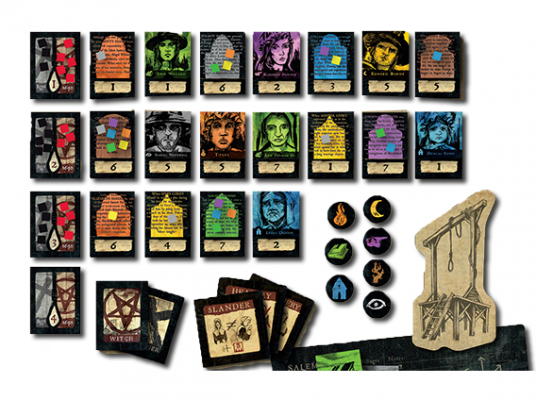 Darkness hangs over Salem. The whispers are turning into open talk, and the talk into accusations. Some of us are lost to darkness, and all of us are afraid. We don’t have much time. We have to find who among us is normal and who seeks to end this community. Because if we don’t…there aren’t any consequences because the game doesn’t work that way, but we’ll still have a pretty good time.

Salem is a deduction game first and foremost, where everyone has a pool of citizens. Some of those citizens are witches, while others are simple God-fearing townsfolk. It is up to those players to determine the allegiances of other players’ characters while hiding the identities of their own.

If you don’t know already, the Salem incident is most famous because there were no witches; those men and women who were executed died because of paranoia – and in many cases, profit. I was worried that the game would gloss over this fact and do a disservice to their memory, but the rulebook has space right at the start to address this fact. Each citizen was named after a real denizen of Salem, Massachusetts, and the end of the book has a biography of each of them. These are short, but respectful, and offer enough historical context that I genuinely enjoyed reading them. The biography adds humanity to the game that took real effort to create but could easily have been ignored.

Visually, Salem masters the aesthetic of the dark times of early colonial life. Much like 2016’s The Witch, this has a stark, drawn paranoia that uses some simple motifs to make you feel uncomfortable. The box seems woven with dark cloth worn from age and use. Splotches on the cloth emulate dirt the farmers would have worked in, and the text is lettered with a wide brush that could just as easily be either a barn’s paint or blood.

The characters themselves look tired, broken by years of hard work and the stresses of the witch hunts. Just looking at them makes you feel worried. Significantly, a noose lies in the background of the main cover, another respectful decision: no one was burned in Salem. They were hanged.

I do not have the expertise to tell if the portraits are accurate, but each character piece also has extra facts on the back to fill in details of their lives

The main components are cardboard, made from a stock that has an ever-so-slight tendency to bend. They will hold up well as long as you use some care. There are also well enough bags for all of the small pieces and pencils provided for the excessive notes that you will need, as well as specialized notepads. While the different groups of citizens, separated by color, might pose an issue for colorblind players, they all have symbols next to their name to differentiate them from one another.

When you play, everyone gets a set of seven villagers, a given number of which will always be witches. Which villagers are witches among any player’s citizens is determined semi-randomly, using a complex formula the game sets up. The rules take some real parsing the first time you try to get to this point. You need to flip around to get certain concepts, but the formula that sets up the witches is crucial to Salem’s deduction.

Play consists of making accusations against another player’s villagers to gather information, and making a final determination. Once you make an accusation, the other player has to respond with one of three alibis, which are discarded after use until they use all three and then refresh. You will have to use each one once before you can use any of them again. These alibis are where the formula from earlier becomes so meaningful. Treachery signals that the accused has the same alignment (as in witch vs. not) of another citizen of his own that player selects. Slander means the two have different identities. Hearsay causes the player to choose two other of his or her villagers and announce how many of the total are witches. Carefully deciding what information you reveal and when is one of the key ways to prevent others from accurately determining where your array of citizens lie.

As you play, you combine this information with some facts generated by the formula, which makes for a great logical puzzle but requires extensive note-taking. Learning these rules is where the game gets complicated. For instance, each color has one witch in common with another color, but only one. So if blue’s player knows his number 4 is a witch and so is orange’s number 4, he knows that orange’s other witches don’t correspond to his other two witches.

The player boards, looking purposefully worn and washed out, also have suggested ways to keep track of known facts via a logical language. You don’t necessarily need this one, you will need some way to hold on to all of your knowledge

There are other rules and some other ways to gather information, but the core of the game is a large logic puzzle you are racing the other players to answer: who among all of the citizens at the table is a witch? As you play, you find yourself engaging in a profoundly deep challenge of logical deduction. You slowly uncover more information to fit the pieces together, hoping you can do so faster than everyone else.

The benefit is how wrapped you find yourself getting into this puzzle. Each new piece of information gives you that much more to work with, and each accusation is a unique chance to obfuscate as much as possible. This is a very cerebral experience, and one that does not lend itself to casual play. If you are committed to an hour and a half or more of a pure deduction game, you will be well rewarded. Otherwise, you run the risk of boredom and frustration.

Salem also offers a basic and advanced mode based on the level of complexity you want. The basic mode involves everyone trying to find out the identities of a single set of seven citizens, by comparison with information you gather from everyone’s sets. You are still trying to conceal your own citizens’ loyalties, but rather than having to figure out all citizens’ loyalties, you are focusing your efforts only on the seven at the center. The game is more of a race to the finish, and one where you have perfect information. The full game requires you to establish everyone’s loyalties but under the pressure of time. You only have a certain number of turns over the months when the trials actually took place, so you have to be more careful and strategic, eventually having to make some guesses. These guesses can be frustrating because it is possible to, for instance, narrow something down to exactly a 50-50 chance, but it is still possible to win making a few wrong guesses. The complexity gets dialed down at lower player counts, so a major decision you should make is whether to play at the maximum of seven and get a true challenge or settle for three or four to make for a much more manageable experience.

The cards are all easy to organize during gameplay, which makes for an easier time working on the real meat of the game

The one real misstep of Salem is that despite how the game looks, it just doesn’t communicate any of the paranoia or horror of the Salem trials themselves. The logical, deductive elements of the game effectively eliminate anything that could make you feel afraid. The oppressive atmosphere you get from the art dissolves as you slot the citizens into the logical formula of the game. Accusations don’t carry weight except as a way to gather more information. You don’t feel, as you might in a social deduction game, that someone is sabotaging your goodly work from the inside, slowly ramping into paranoia, because everyone has witches of their own to protect. This could just as easily have been about police infiltrating crime gangs as the Salem witch trials.

Salem is a dense, tightly crafted experience in bluffing and deduction. The race to finding everyone’s true loyalties challenges your reasoning skills to their limit, even if they don’t emulate the feeling of paranoia that Salem promises.

John Farrell is a legal aid attorney specializing in domestic violence, living in West Chester Pennsylvania. You can listen to him travel the weird west as Carrie A. Nation in the Joker's Wild podcast at: https://jokerswildpodcast.weebly.com/
Related Articles: Salem, Tabletop
Share
Tweet
Share
Submit