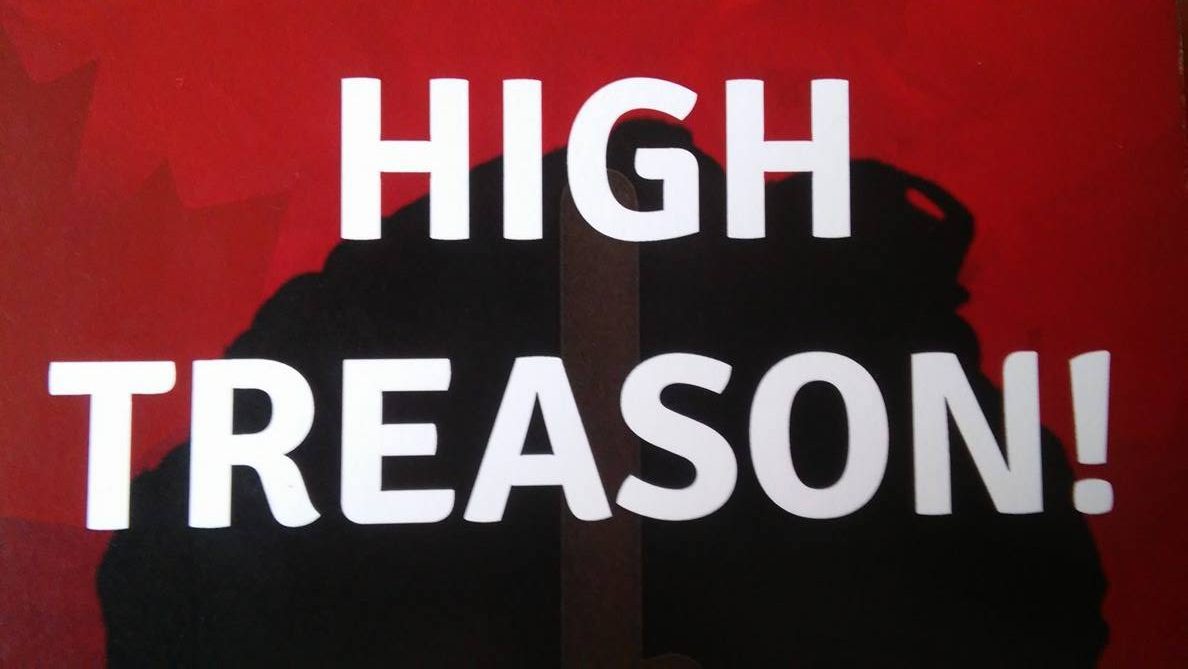 Louis Riel, the leader of a military rebellion against the Canadian government, has been captured and now stands trial. Two forces step forth: a prosecutor, who promises to bring justice to the people of Canada, and a defense attorney, who protects the rights of the accused. High Treason!: the Trial of Louis Riel is a new advent for Victory Point Games, and for gaming in general. It is the first in a proposed series focusing on historical trials, starting with a lesser-known event to expand the knowledge of their audience. I am particularly intrigued by this concept, having represented clients in a courtroom myself. I know that  trial can be either a tense battle of wills or a slog of arcane procedural matters. Which is Louis Riel? Well, both, but looking into the game one gets the sense that this feature is intentional.

Before that point, however, you cannot help but be struck by the game’s board and pieces. They are distressingly ill-considered and constructed. The board, which is a simple fold of heavy paper, was damaged on the folded edges before I got it out of the box. The board has to be unfolded to be played and refolded to get back in the box, constantly weakening all the way. It also never quite flattens properly on the table, which is a problem because you keep track of everything by means of tokens on the board. If these slide around, which they often do, you lose track of crucial information. The cards and rulebook are of a similar stock. They aren’t hardy, so you will need care to make them last.

This is how the board looks without extensive effort put into flattening it. And the white crease at the left side is exactly how it looked out of the box.

The tokens themselves are reasonably sturdy cardboard but they come with a curious add-on. The box’s final component seemed at first to be an accidental addition. You find a napkin with the Victory Point Games logo. An ordinary paper one. But what is this inscription below the logo? “Use to remove residual soot from your counters.” Oh yes. Those tokens I mentioned before have soot at their edges, which you will need to diligently remove or risk getting black residue on your hands and the board.

Apart from quality, the reference cards and board were designed with far too much information. They are cluttered with rules, suggestions, and differing colors that clash together to intimidate even serious gamers. This information is actually helpful, especially some of the strategy portions for the prosecution and defense, but their layout floods you with information. It’s especially a shame because the rules are fairly simple, so this enormous dump is largely unnecessary. In the rulebook itself, those rules are well presented and easy to follow. Helpful sidebars next to the main text give you strategy hints that add significantly to your understanding.

This information is assuredly helpful, but the way it is presented puts the eye off. There is simply too much here.

Actually playing the game has you messing around with a few simple mechanics in a dense thicket of moves and countermoves. The trial is structured accurately into five sections: jury selection, the prosecution’s argument, the defense’s argument, both sides’ summations, and jury deliberation. The first four phases are played out through cards, and the last a scoring round that is affected by the phases that came before.

During jury selection, both sides will attempt to learn the prejudices of potential jurors, either to knock them out or keep those jurors’ biases in mind. Each juror has a secret and randomly determined language preference, religion, and occupation. Some of each type will be more inclined towards the defense, and some the prosecution. The prosecution, for instance, will want Protestants on the jury, while defense will hope for sympathetic Catholics. It’s wonderful to see this level of detail; real trials are more about framing your arguments to the human prejudices of the people in front of you, not just making the better argument. Jurors are fickle people who care less about the law than the collection of beliefs they entered the courtroom with. You and your opponent will play out hands of cards to learn about the jurors or use special events to give you an advantage. At the end, both players bank two of their initial seven cards for their summation, laying the groundwork for the final argument.

Both phases of the trial are also card-driven. These cards are similarly full of information, including historical narratives, action points, and events for each phase. High Treason tracks a real trial; each phase is initiated by one side, the prosecution and the defense respectively, as each tries to build their argument and undermine the other’s. You will play cards for a few key purposes. Every card has an action value. These actions can be used to sway individual jurors, which will make them favor your arguments in the final deliberations. You can even lock down a juror with enough effort, preventing your opponent from swaying them unless they use one of a few rare Attorney cards, which have properties that go beyond those of normal cards.

You can also argue aspects of the trial, whether it be one of the religions, occupations, or languages. These are less effective on individual jurors, but during deliberations could potentially give you an enormous swing. These aspects only affect those jurors who identify with them, which is why it is so crucial that you know where jurors stand, and they can also be locked down if you spend enough of your limited resources focusing on them. Finally, you can focus on a third line of attack: the merits of the trial itself. The prosecution will try to raise the Evidence of Guilt track and the defense will try to raise the Insanity Defense track. Both affect the deliberations at the end of the game. Of course, some cards allow for objections to interrupt your opponent’s events. However, doing so will cost you cards yourself, and limit your ability to argue during the rest of the phase.

The layered information on these cards can be either strategic or confusion.

High Treason succeeds spectacularly in representing the feeling of trial strategy. You have to decide which points to hit and which to concede. The jury’s attention span is limited, and you can only give them so much information. It is ironic and completely fitting that the actual facts of the case are only a side issue in the trial. This also builds the game into a duel of wits between you and your opponents. You need to adhere to a consistent strategy to be really successful, yet there is room for experimentation to keep the trial exciting. During each phase, you will set some of your cards aside to be used in the final summation. Special events will let you access these cards later on, but otherwise these cards will be locked away from you.

The summation consists of the cards you have been saving throughout the game, and it is your final, stirring statement of your case. It is your last chance to sway jurors to your side or affect aspects. This phase has similar actions as the others, but as the end of the trial can be one of the most influential. If you are careful enough you can demolish the careful strategy your opponent has been building.

Finally comes the deliberation, during which you score jurors according to their aspects and sway towards either side. The Guilt track will help the prosecution, but if it is too low, the case will be tossed out for lack of evidence. The Insanity track will affect multiple aspects to help gain ground for the defense. However, if any jurors remain locked by either side, they can argue their point to other jurors to sway them. If the point value is below 100, the defense prevails. This is, realistically, a high bar for the prosecution, and it will make their first few games frustrating.

In fact, everyone’s first few games are frustrating. There are many cards, only some of which you will see during each game, but all of which have multiple abilities. Moreover, the multiple strategies continue to confound. The rulebook itself admits that you will have to go several games until you get a handle on how High Treason works. At around 45 minutes to an hour, depending on how much you want to weigh your options, this is a considerable task. The height of the burden makes for good play if you have a new player against an older one. Otherwise, the defense could succeed more from randomness than strategy while the prosecution has to do everything right.

And yet…this is completely accurate. A defense attorney’s role is not necessarily to put together a consistent narrative. All you have to do is poke as many holes as you can in the prosecution’s argument. They have to create a sensible story, but your goal is only to undermine and obfuscate wherever you can. Sacrifices were made for this realism, but the feeling of a trial has never been so delicately presented.

High Treason is every bit the trial that it sets out to be: surprising, frustrating, and rewarding in equal measure. There is a high bar to entry that makes the game a serious investment, and is worsened by subpar components, but there is a serious reward here for those who want to make the hurdle.

John Farrell is a legal aid attorney specializing in domestic violence, living in West Chester Pennsylvania. You can listen to him travel the weird west as Carrie A. Nation in the Joker's Wild podcast at: https://jokerswildpodcast.weebly.com/
Related Articles: High Treason: The Trial of Louis Riel, Tabletop
Share
Tweet
Share
Submit