I love everything about robots, from their motors to their circuit boards, mapping algorithms and motion planning algorithms. Both real and fictional ‘bots fascinate me. So much that I went to Grad School to learn how to make them better. As a society we gravitate to things that are like us, but not actually us. Even before Capek gave us the word, we were mesmerized by robots.

Robots have been used a thematic device many times in boardgames. In Volt, as its tagline suggests, robots duke it out in digitized combat. Players maneuver an unforgiving arena looking to best their opponents in this fast paced, chaotic action selection game.

The ultimate goal of Volt is to achieve five victory points before anyone else. Points are awarded for destroying other robots or for ending a turn on a scoring location. Both of these objectives sound easy, but they are not. Players will have to navigate play fields riddled with pits, all the while dodging opponents’ annoying laser beams.

At the start of each round players ‘program’ their robot. Programing consists of secretly assigning dice to a dashboard. Once all players have assigned their three dice, everyone reveals their choices and dice are resolved. The color and value of the dice determines the order of resolution. Red dice resolve first, then white, then blue. For each color, the dice are resolved in ascending order.

Dice are placed either on movement commands or weapon commands, with their value determining what the action will do. Movement is easy: if you put a dice on ‘forward’ and set it to four, your robot will move forward four spaces when activated. Robots will keep moving if they run into another robot, pushing them along until the movement is completed. While movement can only be assigned in the cardinal directions, weapons can shoot diagonally as well. The value of a weapons die also determines what happens to the robot that is hit. Most of the weapon effects are about moving around a player’s dice still on their dashboard. For example, if hit with a five laser, a player must move all of their dice 90 degrees clockwise.

Once all robot’s finish shooting and moving, whichever robot is on the scoring space is awarded one point. Every round a die is rolled to determine the new scoring location. Any robots that were destroyed are reactivated and placed on the board ready for the next round. This cycle of programing and resolving repeats until someone scores five points.

The game includes advanced variants that introduce robot upgrades. These upgrades offer a tremendous amount of variability. In one game players may have reflector shields, the next they may be able to teleport their opponents

Each player has their own dashboard and player screen. The screens are very helpful in reminding new players both the order of resolution and what happens when the lasers are used. The art is rather minimal, nothing really on the area boards, and only a little on the player screens. The game comes with two double sided arena boards that offer some variety.

The rules for the game are very easy to pick up from the rule book and are simple to explain. The rules are straightforward and intuitive, giving them clarity. Rules explanations take five minutes max.

The game supports two to four players. I would lean towards recommending a full four player complement. With too few people, the game feels too straightforward. With four, everything is chaotic and engaging. Game time is listed as thirty minutes, and while this is achievable, it can also drag on if people think too long. To combat this, I normally play with a timer, so players are rushed to get their program done.

Volt is amazingly simple, and yet exhibits significant emergent behavior. The premise and execution are straightforward, but players will agonize over the programming choices. Because actions are selected simultaneously, some people’s strategy is to attempt to outthink their opponents who are also actively trying to outthink them… it is a thoroughly enjoyable vicious cycle. Inevitably the best laid plans go awry and someone ends up driving themselves into a pit. 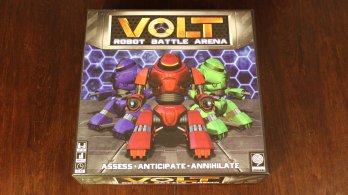 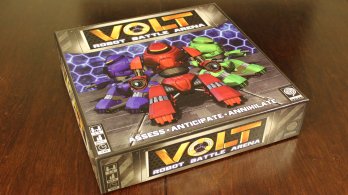 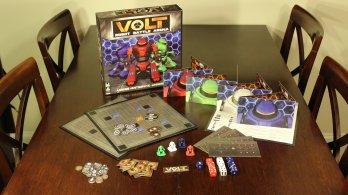 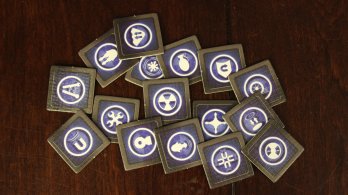 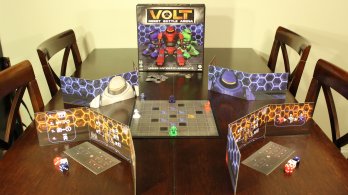 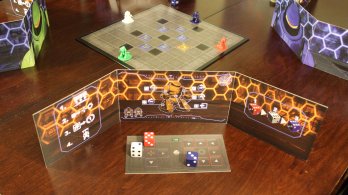 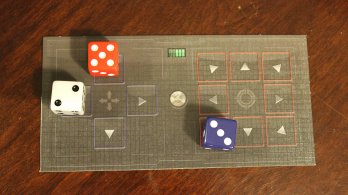 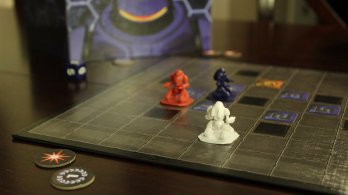 For a game containing so many dice, only small amounts of randomness exist. If more than one person assigns the same number on the same color die, one of them will randomly go first. This tie breaker happens surprisingly often, and does not always favor the robot that goes first. Most of the entropy comes from the player’s actions. Inevitably when the dice are revealed, there are bound to be some surprises and unintended results. This break from decks of cards and dice based skill checks is rather refreshing.

When setting up the game, the table presence is lacking; Volt is missing the “come play me!” vibe. The arena boards are rather small and unassuming while being as big as it can be without having to fold the board and from a design standpoint. The board needs to be small enough for the robots to cover large parts of the board with one move. Even with these considerations, everything looks diminutive out on the table.

Often games are advertised as “filler games,” games that are played in between other games, or before a game night while waiting for someone to show up. I am not really a fan of that phrase, but Volt fits a special niche in the game night ecosystem. Volt is not going to fry people’s brains since it is easy to learn and players can drop out and join without causing too much of a stir. The energy level can be high if the pace is kept up. My game group has taken to playing Volt as the last game every night just to loosen up. After a long frustrating strategy game, or an unforgiving dice fest, Volt is there to remind people that games are supposed to be fun.

The chaos of Volt can be a turn off to some players who like to be in control. Volt offers no such feeling. Once the chaos is embraced, the game shines as an engaging and entertaining experience that is sure to draw many laughs. I would highly recommend this game for any collection. It is accessible for newcomers, and still interesting enough for even the most experienced.