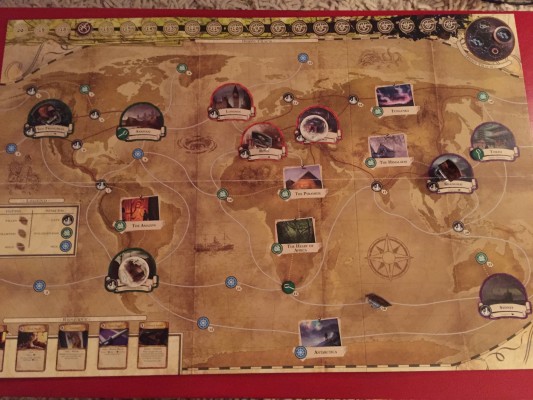 The Fantasy Flight version of Arkham Horror is a boardgaming classic. Traveling the city of Arkham with friends and fighting off the cohorts of Cthulhu rarely results in a success, but the difficulty is part of the attraction. However, issues with Arkham Horror became evident. The game gets too long with too many players, the down time for players can be unbearable, The difficult to teach without prior experience, and an alpha gamer can try to control everything because it is a cooperative game. Now Eldritch Horror has come around, but does it alleviate the sins of its father, or does Cthulhu rear his ugly head again?

The setup does take a while, as you must separate the decks, give everyone their health and sanity tokens, choose an Ancient One, separate tokens into piles, and build a Mythos Deck. If you have everything organized setup time won’t take as long, but everyone might want to prepare some Elder signs while you set up.

Eldritch Horror continues the tradition of including a large number of cards used throughout the game. Some cards are used for your inventory such as items and spells, while others contain the situations you’ll encounter throughout this macabre world. The backs of the cards indicate their use, and the artwork mirrors the theme. You’ll definitely want some way to keep all the decks organized in the box using bags or magic table, or else you’ll spend a chunk of time reorganizing the decks if they get mixed up.

You have a cast of investigators similar to Arkham Horror, but each of their stats are fixed on their character card instead of adjustable. This reduces the amount of down time each round since you don’t have to try to constantly see if you want to change your character’s stats. Your Vitality and Sanity are listed as well, and you don’t want to lose either one of them because it can mean the end for that character. The character cards are smaller, so the table footprint isn’t as big, which is good, because you will have plenty of cards containing your inventory, spells, and other characteristics laid out in front of you.

Just like Arkham Horror, Eldritch Horror is a cooperative game where investigators try to stomp out the forces of Cthulhu, or go insane trying. While Arkham Horror features a city, Eldritch Horror has your investigators traveling all over the world. At the beginning of each turn, every investigator is allowed two actions. These actions are travel, rest, trade, prepare for travel, acquire assets, and actions tied to components you have. Each player can perform an action only once per turn, so you can’t use the travel action twice. Preparing for travel is unique. If an investigator is on a city space, he can gain a ticket. If a train path is coming out of the city, the investigator can gain a train ticket. Similarly, a city needs to have a water path to acquire a ship token. An investigator can never have more than two travel tickets. When travelling, after moving along one path, these tickets can be used to move the investigator an additional space. That means you can’t spend a train ticket and then move along a different path, adding a little strategy and planning to movement.

After all investigators have made their moves, each one goes through the encounter phase. If the investigator currently resides on a space containing monsters, the investigator must resolve combat with each monster on that space. If after the combat encounters the investigator has no monsters in his space, he can resolve another encounter. Three separate encounter decks are created for specific continents, as well as a general encounter deck that can be drawn from for any space on the board. Tokens at the locations provide other kinds of encounters, like clue tokens, are resolved with research encounters and gate tokens use other world encounter cards.

Encounters can be good or bad. Most require a test against one of your stats, often with a modifier to represent how difficult the encounter is. To pass a test you roll the number of dice equal to the value of your skill for that test and adding or subtracting the number of dice indicated on the encounter. Rolling at least one five or six results in passing the test. An investigator may also spend clue tokens to reroll one die. Often encounters will have an initial effect with a test. After that test is completed, a pass or fail effect is read. Sometimes a successfully completed test gains nothing, but other times you can increase one of your stats or gain items. When failing a test, you often lose sanity and health. While the developers could have constantly beat you down for not completing a test or barely reward you for a successful test, they struck a good balance between rewards and punishments. Don’t think you will get off easy failing a test, as Eldritch Horror is still difficult even with the rewards given.

Once everyone completes the encounters, the Mythos phase begins. All of the evil occurrences happen during this portion. Draw a card from the Mythos deck and resolve its effects, which may include advancing the omen track, resolving reckoning effects, spawning gates, creating a monster surge, spawning clues, placing a rumor token, and resolving any effects on the Mythos card.

Gates are spawned by taking the top gate token from the pile and looking at its location. Then a monster token is is placed at that gate. Some monsters have an icon on the front to indicate its spawn effects. When that monster is spawned, directions on the card’s back tell where to place it or to spawn another monster. When clue tokens spawn, they flip to show the location and are placed there. The Mythos card provides placement for rumor tokens.

As in Arkham, combat against monsters has you roll against a Will test first to see if the investigator has the mental fortitude to handle the sight of the grotesque being without losing sanity. Losing a Will test only causes you to lose sanity. Unless you lose all of your sanity during the Will test, you continue to the Strength test, which determines if the investigator takes damage or kills the monster. Damage against monsters is cumulative, giving investigators the ability to gang up on tougher monsters to try to defeat it.

The doom track represents the time before the Ancient One wakes up. The investigators must do everything in their power to make sure it doesn’t hit zero. The omen track has four stations in a circular pattern, with two spots with the same omen symbol and the other two spots with different omen symbols. Each gate contains a symbol on it, and the doom track marker is advanced one spot for each gate with the same omen symbol as the current one on the omen track. I like this system because it rewards you for resolving gates and ramps up the tension when more gates are spawned. It also makes certain gates a higher priority than others, since certain gates will advance the doom track twice as quickly as the others.

If you have played Arkham Horror, then many of these elements should sound familiar. Trading items, combatting monsters, going to gates, and encountering the Ancient One link the two together. Eldritch Horror involves less down time for players because the actions play more quickly and everyone’s stats are set. While the box says it plays one to eight players, I wouldn’t play with more than five, with four being preferable. I do appreciate the fact that it can be played solo, as it’s a great way to learn the rules of the game.

If you play Eldritch Horror enough, you will probably want more content. While each Ancient One, location area, and Mythos phase has its own deck, the number of cards for each deck is small. Still, Eldritch Horror contains enough content that you likely won’t repeat content in the first few plays.

Eldritch Horror contains all the flavor of Arkham Horror within a tighter package. The objectives help tell a story instead of creating arbitrary objectives to win the game. The omen track makes sealing gates more important. The combat resolves quickly, but still has the same flavor. Each investigator has important decisions to make each turn. The game is difficult but not unwinnable, and expansions integrate easily into it. If you like Arkham Horror, you’ll like Eldritch Horror, and even if you don’t like Arkham Horror but enjoy cooperative games and have a group that revels in the Lovecraftian mythos, then Eldritch Horror is worth a look.

While not working as a Database Administrator, Keith Schleicher has been associated with Gaming Trend since 2003. While his love of video games started with the Telestar Alpha (a pong console with four different games), he trule started playing video games when he received the ill-fated TI-99/4A. While the Speech Synthesizer seemed to be the height of gaming, eventually a 286 AT computer running at 8/12 Hz and a CGA monitor would be his outlet for a while. Eventually he’d graduate to 386, 486, Pentium, and Athlon systems, building some of those systems while doing some hardware reviews and attending Comdex. With the release of the Dreamcast that started his conversion to the console world. Since then he has acquired an NES, SNES, PS2, PS3, PSP, GBA-SP, DS, Xbox, Xbox 360, Xbox One S, Gamecube, Wii, Switch, and Oculus Quest 2. While not playing video games he enjoys bowling, reading, playing board games, listening to music, and watching movies and TV. He originally hails from Wisconsin but is now living in Michigan with his wife and sons.
Related Articles: Eldritch Horror, Tabletop
Share
Tweet
Share
Submit