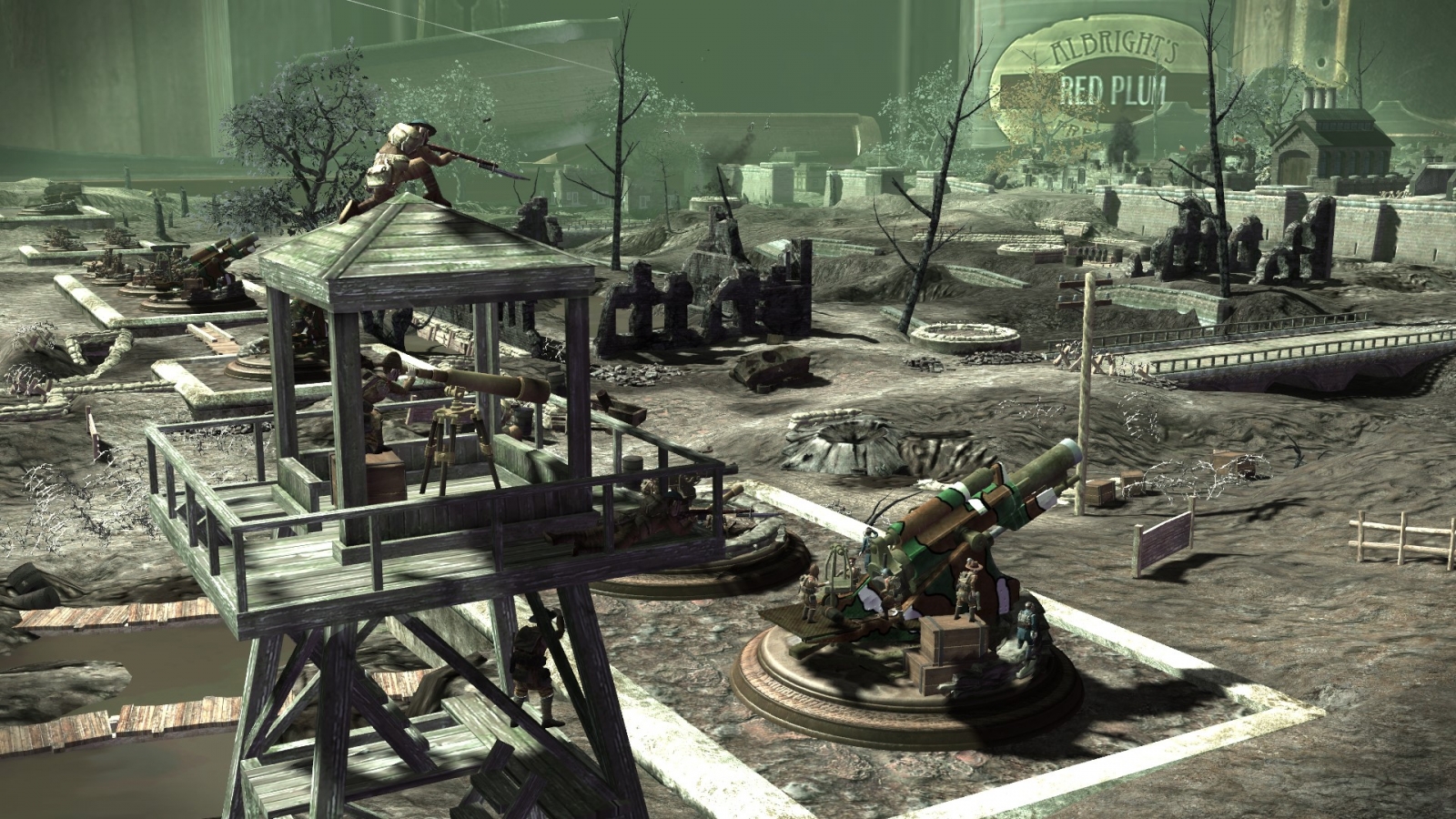 I’ll admit it – I never played any of the original Toy Soldier games. While I knew about their popularity, somehow they passed me by. Like many others, I grew up playing with army toys and tanks, so despite my lack of knowledge about the series, I understand the game’s popularity as I also have an attachment to the toys it so fondly depicts. Toy Soldiers HD basically allowed me to live out my childhood dreams by bringing toy battles previously only imagined to vivid life, all while providing a surprisingly deep gameplay experience.

Set during World War I, Toy Soldiers HD opens with the June 28th, 1915 battle between Germany and France. There is no real story to speak of, save from moving from battle to battle throughout World War I’s history. There are a few cue cards in-between acts to introduce new weapons such as tanks and planes or to explain the battle, but that’s the extent of it.

The game’s premise is simple: to win, you must survive increasingly difficult waves of enemies. You begin with a small amount of cash and a few seconds to get a feel for your playing field before the battle commences. A quick click of the right thumb-stick will allow you to view the field from overhead and quickly make out key combat areas. From there you must set up your defenses, scout out and take down enemy weapons, and protect your toy box. 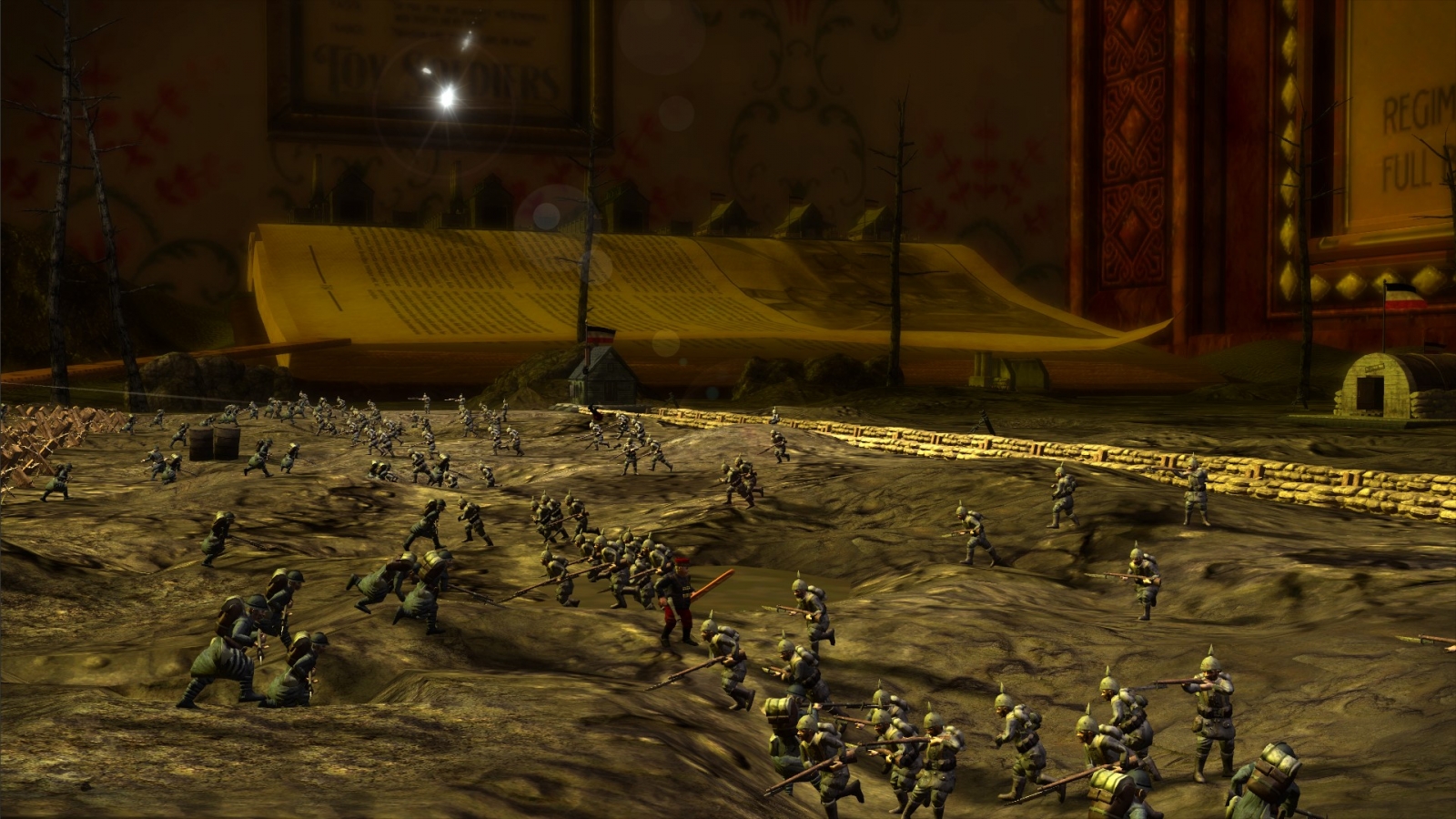 To defend your toy box you have a variety of assets at your disposal including airplanes, tanks, zeppelins, cavalry, soldiers, howitzers, anti-aircraft turrets, anti-infantry turrets, mortar launchers,  chemical agents, and – to slow down those pesky foot troops – barbed wire.

Each weapon has its own strengths and weaknesses. The Howitzer has a long range and deals high damage, but is ineffective at close range. Anti-Aircraft guns are extremely effective against enemy air units, but provide little defense against other forms of attacks. Anti-Infantry guns are probably your most vital weapon which – while ineffective against armor, at least before being upgraded – are extremely effective against foot troops and has a 360 degree range of fire. Mortars can be used against infantry and tanks and output high damage, but have an extremely limited range; vehicles such as tanks and airplanes are available in short supply, with the tanks moving slow but being powerful, and the airplanes capable of dropping bombs and participating in dog fights. Additionally, sniper towers and zeppelins are sometimes available with the former allowing you to snipe distant targets before they have a chance to attack and blimps provide powerful bombing attacks.

Each enemy kill grants you some money, which can then be used to lay down additional defenses or upgrade the ones you currently have. Upgrades unlock as you progress through the campaign, but are absolutely essential to winning during later levels. Many weapons, at their base level, cannot penetrate the ridiculous armor many of the bosses have – meaning without a few upgrades you will lose quickly. 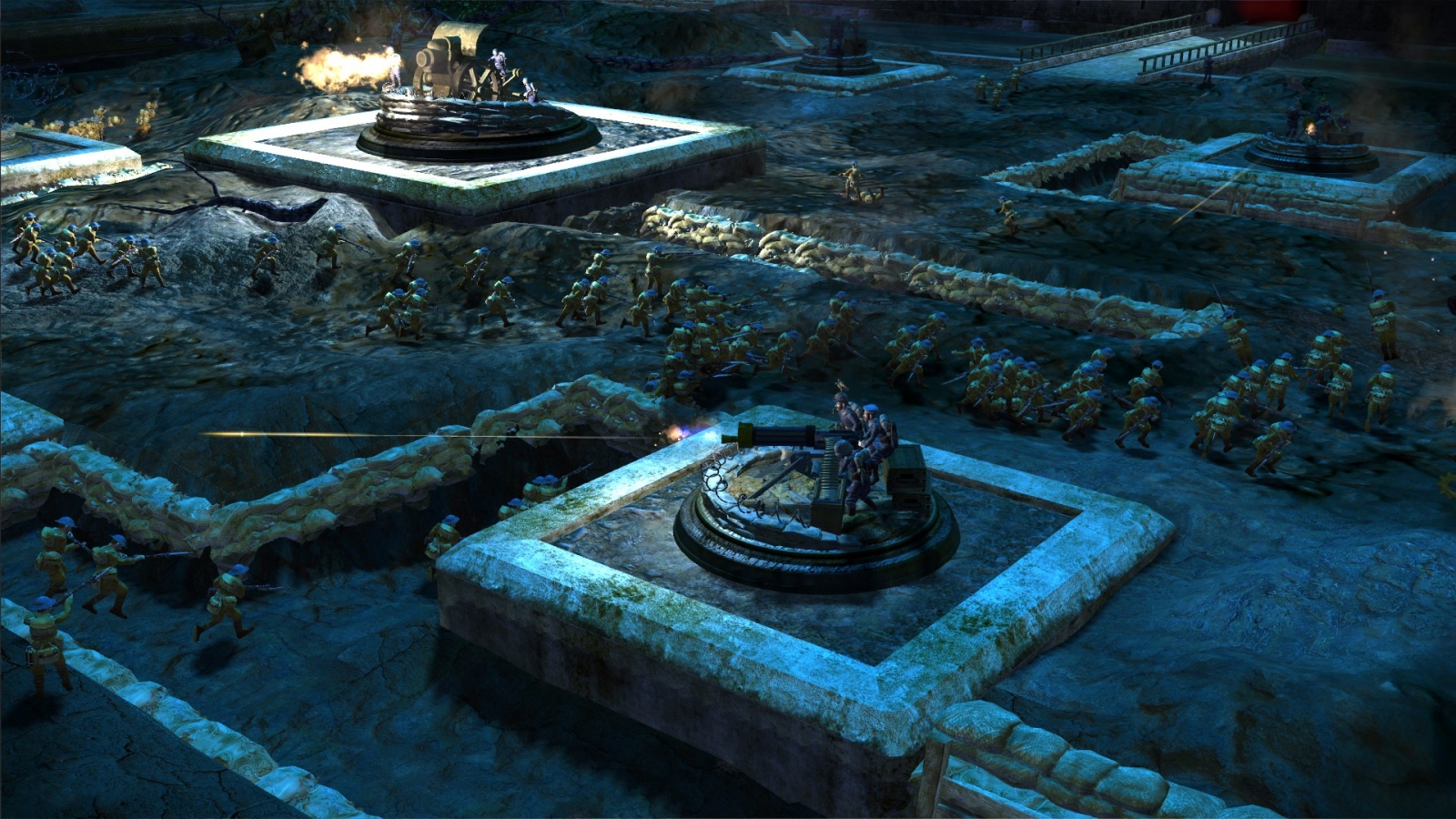 Units have a small amount of health and armor at level 1 and can easily be destroyed by your enemy. While soldiers are little threat to most units, mortars can wreak havoc on your defenses. Many later levels begin with the enemy fully upgraded and on the attack while you must use whatever you have at your disposal – normally a couple of tanks or a few airplanes – to destroy their mortars and howitzers so you can earn money and safely set up your lines of defense, all while being bombarded by foot soldiers, airplanes, tanks, howitzer and mortar shells, and more.

Toy Soldiers HD is quite a bit more complicated and difficult than I had imagined, and all the better for it. What I foolishly expected to be a straightforward war game featuring toys turned out to be both strategic and stressful, featuring levels which could take anywhere from a half hour to hour to complete on harder difficulties.

There are multiple difficulties so players of all skill levels – or those just looking for fun minus the stress – can participate. Casual still puts up a fight in later levels but is overall pretty forgiving, while Elite will have you on the edge of your seat for hours on end sweating over every detail. I do recommend those new to the genre to at least play a few levels on casual to get a feel for the combat and techniques necessary to survive before hopping into harder difficulties. 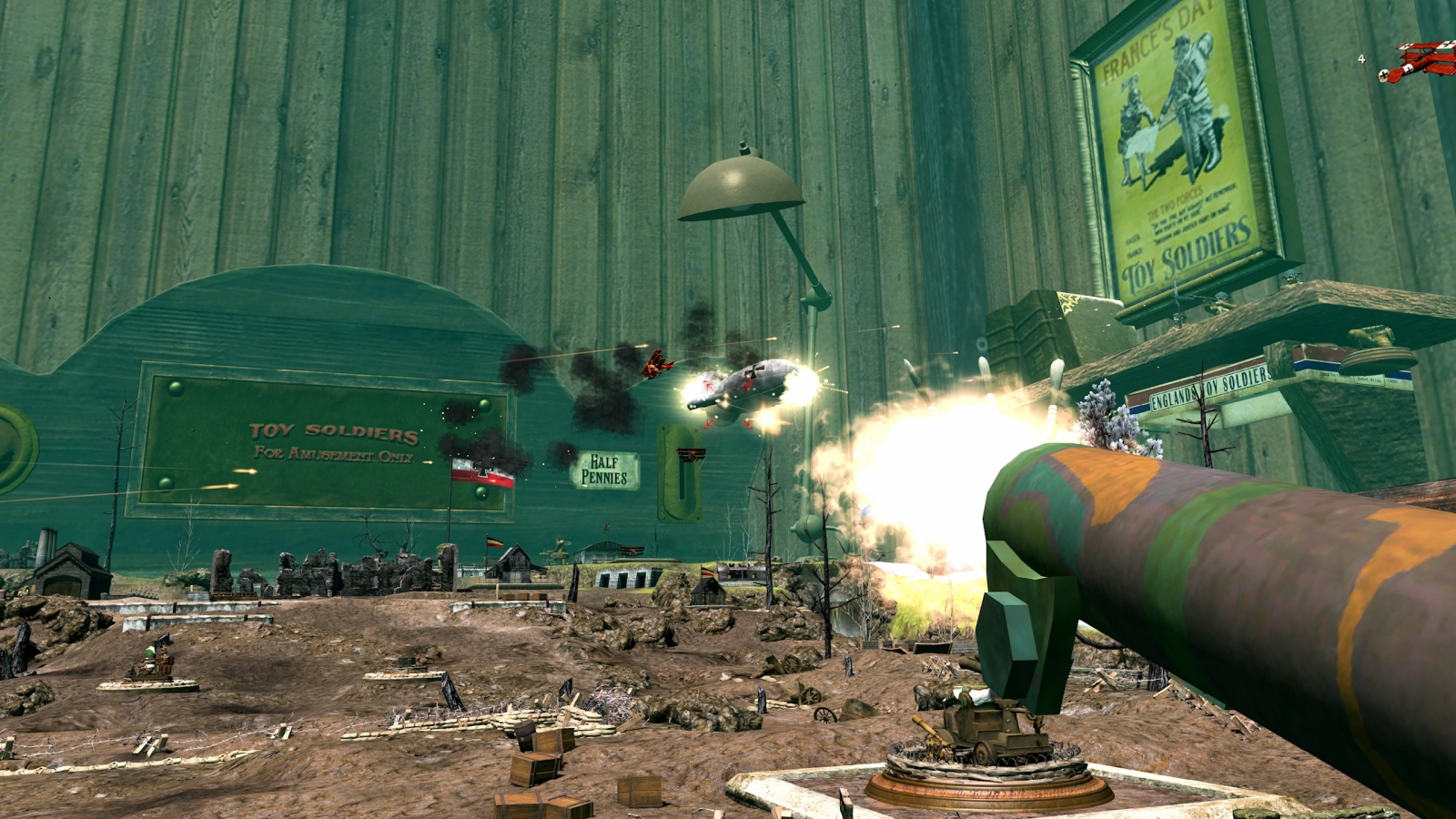 The levels are well laid out, usually providing both yourself and your enemy with advantages. As with any war, defeating an enemy’s defenses does allow you to place your weapons in their plots, gaining an advantage by essentially setting up shop right outside their main gates. Unfortunately, you do have to place your defenses in designated spots along the map, though these areas are designed to allow players to experiment, the size can and does prevent a few weapons from being placed at times. I would have enjoyed being able to place defenses in areas aside from the designated spots, as well as the ability to create more tanks/airplanes/or soldiers as backups – but these are small gripes in the scheme of things.

Toy Soldiers HD often provides players with only a couple of spots to place large weapons, such as the howitzers and anti-aircraft guns, forcing players to take a gamble and hope for the best, despite not being sure which enemies will be thrown at them further down the line. I suppose that is part of the difficulty – a howitzer takes up the same space as 4 anti-infantry guns or one anti-aircraft gun, but can wreak havoc on tanks – so is it better to use that space to take down more formidable foes? Or throw four anti-infantry guns on it, upgrade them, and watch them mow down anything that comes near? Choices like that are constant and the battles never let up to allow you a moment to assess the situation. Thankfully, you can sell your weapons if you need to clear up a plot of land, so no choice is permanent, provided you have the money to purchase a new weapon.

The units in Toy Soldiers HD will fight on their own, allowing you to set up a defense and move on to survey the battlefield without much worry. Thankfully, the game’s AI is pretty great, although it does seem to have an entirely too small field of vision and will not attack enemies that are further out, despite having the weapon attack range to do so. In cases like this you must occupy the weapon and take matters into your own hand. 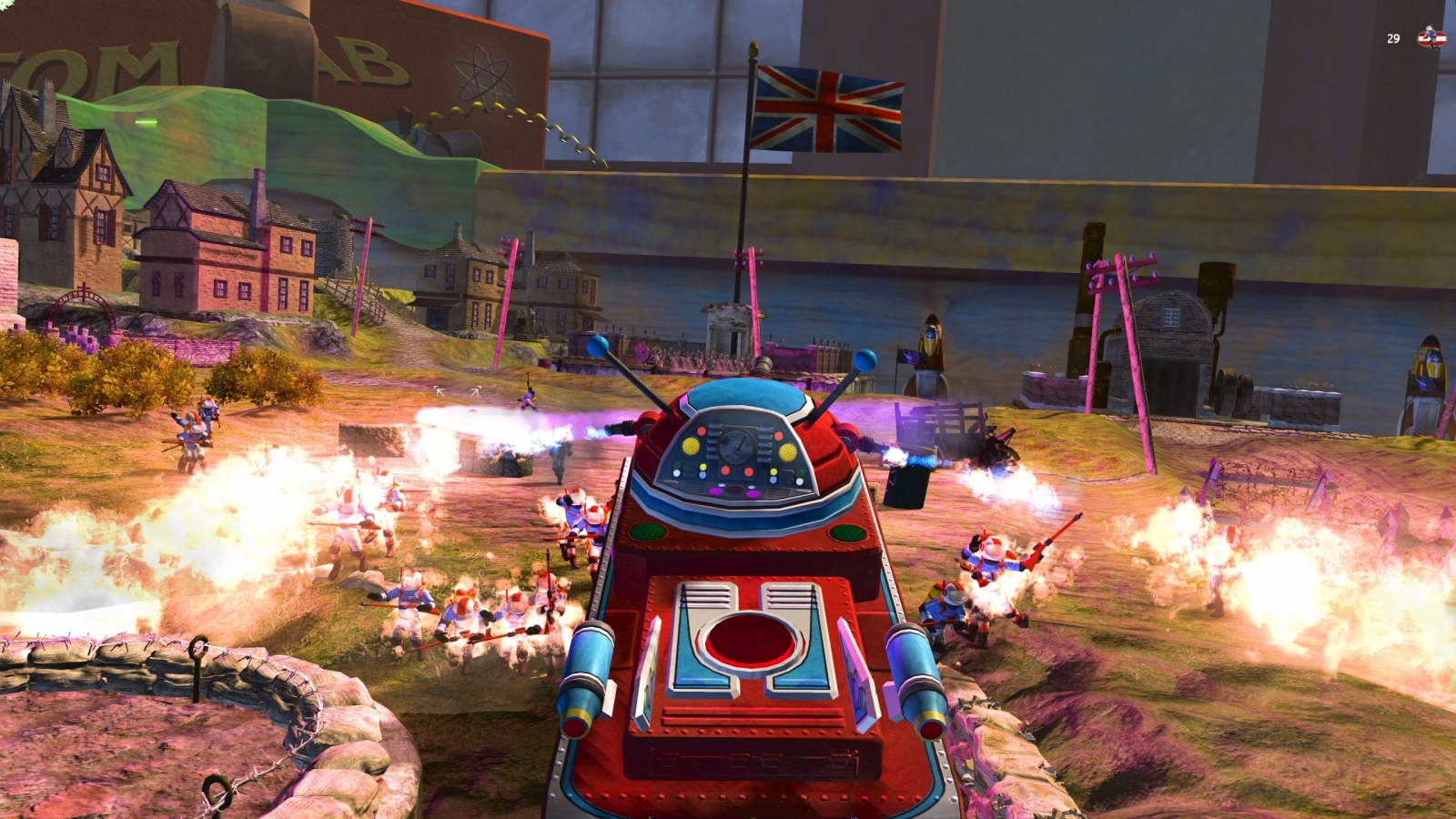 One of the coolest aspects of Toy Soldiers HD is hopping into your defenses and opening fire. You can mow down enemies, launch a mortar and follow its attack with a bomb cam, hop into a plane and participate in a dog fight, control a tank and tear down walls or just run over large groups of enemies, or take over a howitzer and lay waste to large sections of the playing field at once. It is fantastic to get into the grit of the battle and see it from up close, and allows you a chance to gain large amounts of money by scoring kill streaks. After a certain amount of kill streak bonuses you are granted a barrage which allows you to absolutely decimate the enemy on screen – but use the barrage wisely, as they are few and far between.

While I normally enjoyed taking control of the various weapons at hand, later levels often rely on the player using the slow moving tanks to take down enemy defenses before setting up their own and can border on frustrating, rather than fun. While controlling the tank, you can’t survey the map, which leads you to blindly move at a snail’s pace to find the enemy’s defenses and destroy them before they destroy you. Tanks also tend to get stuck on the path and are unable to climb most walls or obstacles in your way, forcing you to take the long way to your enemy all while your toy box is being attacked. There is also an issue with later levels, at least on higher difficulties, seemingly expecting you to know what enemies are coming as many of your defenses may not work against the end boss – which is fine if you have the money to sell your units and quickly replace them, but puts you at a huge disadvantage if you don’t. 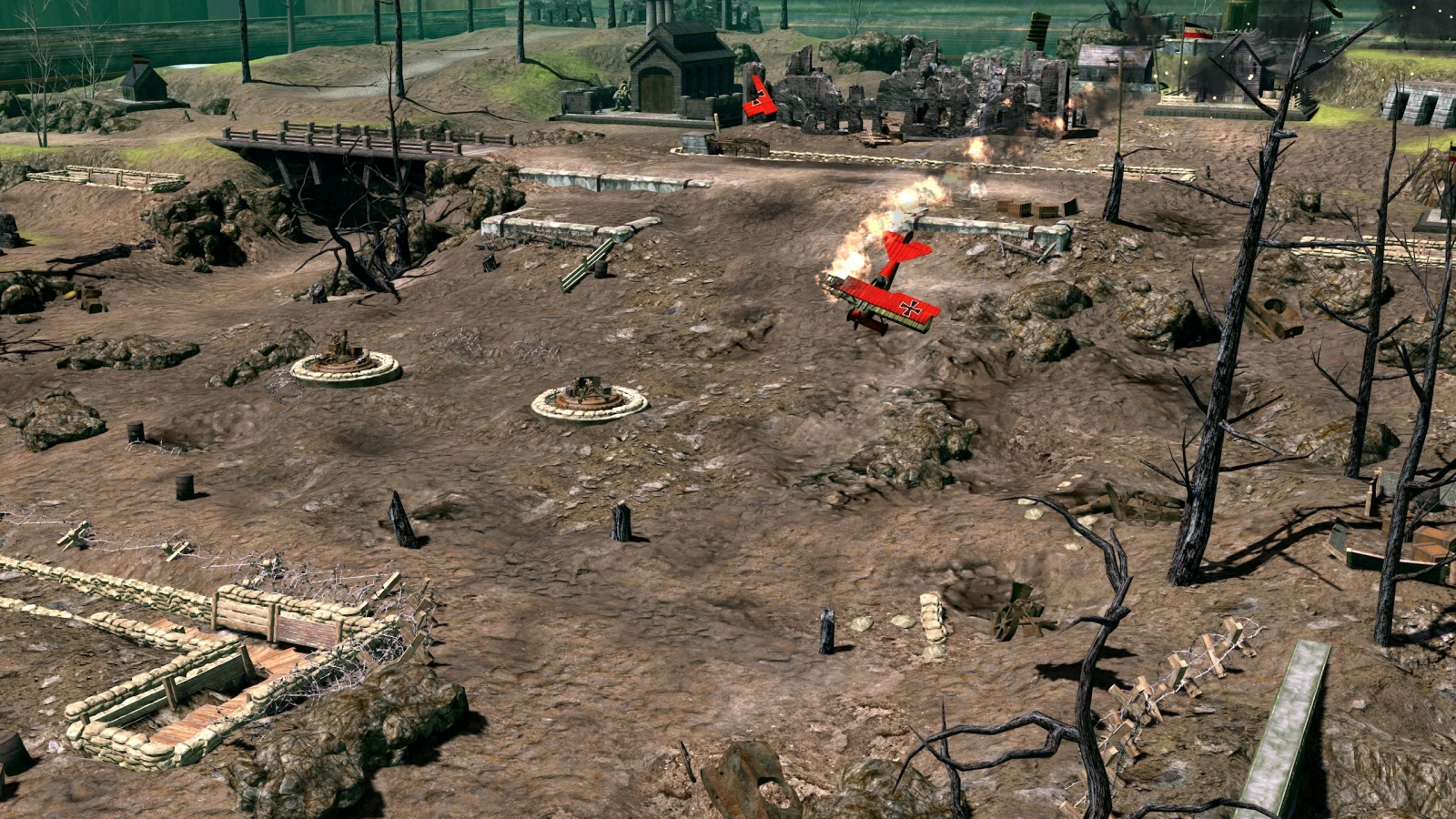 Toy Soldiers HD is rather long, with 18 base levels and 6 bonus levels, which comprises the entirety of the original game as well as all originally released DLC. Upon completion of a level you can replay it at any difficulty. While the main game is rooted in realism – well, at least as realistic as a game about toy soldiers can be – the bonus levels/DLC allow you to fight against UFOs, giant robots, and more, adding much needed diversity and injecting a much appreciated humorous tone to the proceedings, providing a welcome respite after the chaos of the end levels.

There is a multiplayer mode which allows for split screen PVP or online matches, including quick matches or private matches, but unfortunately I was playing the game before the official release date and could not find anybody to play a match with. That said, if the multiplayer is half as fun as the campaign, I believe this game will find a dedicated audience quickly after release.

Toy Soldiers HD allows players to live out the scenarios they once created as a child playing with toys on a rainy Saturday afternoon, while also providing a complex, stressful, and beautifully crafted strategic experience. I found myself eager to see what was next, to retry levels with better defenses after learning what to expect, and to hop into a multiplayer match (even if I couldn’t at press time). I may not have played the original, so I can’t compare the remaster to it, but if the original was half as good as the remaster then I am sorry that I missed out on this series for so many years.

Richard Allen is a freelance writer and contributing editor for various publications. When not writing for Gaming Trend you can find him covering theatre for Broadway World, movies and TV for Fandomize, or working on original stories. An avid retro gamer, he is overly obsessed with Dragon's Lair. Chat with him via @thricetheartist on Twitter and @richardallenwrites on Facebook and Instagram.
Related Articles: Toy Soldiers HD
Share
Tweet
Share
Submit