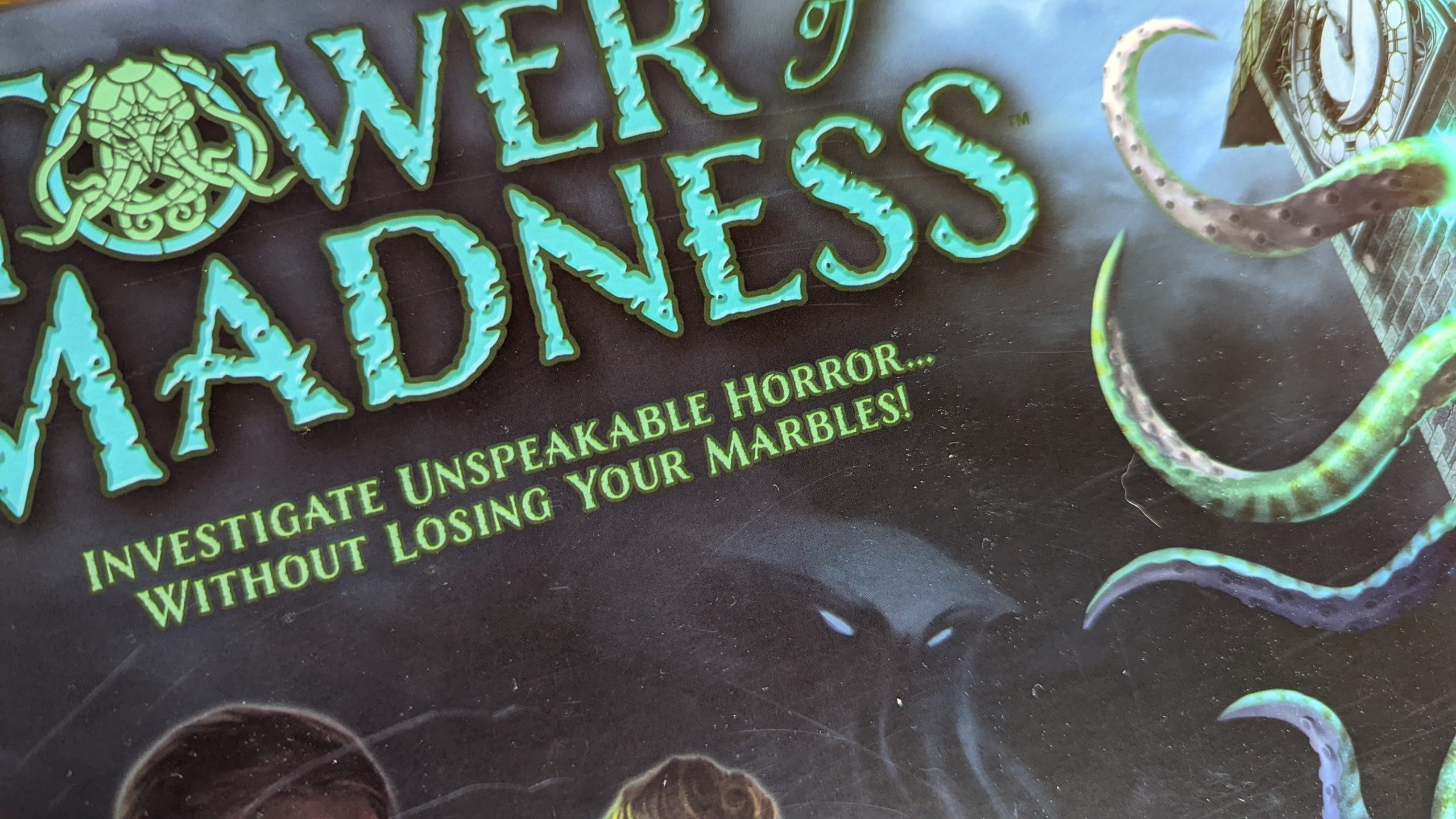 Growing up, a lot of the games I had were gimmicky dexterity games with titles that played on common phrases. Ants in Your Pants, where you flicked little plastic ants kind of like tiddlywinks into a big plastic set of pants with red suspenders. Break the Ice, where you hammered clear acrylic ice cubes out of a tray. Don’t Spill the Beans, where you had a barrel of beans that would spill. You get the idea. Tower of Madness is what you get when you take one of those games, give it a Lovecraftian lacquer, and apply some more advanced board game design principles to it.

Each of the game’s rounds starts with revealing that round’s location tile, which applies special rules to that round, like focing players to immediately lose a turn on certain results. Players then take turns rolling and locking in their five custom d6s,which have both numbers and icon faces, trying to get a heart, a mind, and a gate icon, which correspond to one through three. After locking in the three icons, they will continue rolling to try to get the highest numerical result on their remaining two. The sum of these two becomes their discovery value, and the player with the highest discovery value who successfully locked in a heart, brain and gate becomes that round’s lead investigator and takes the location card, adding its investigation value to their score. 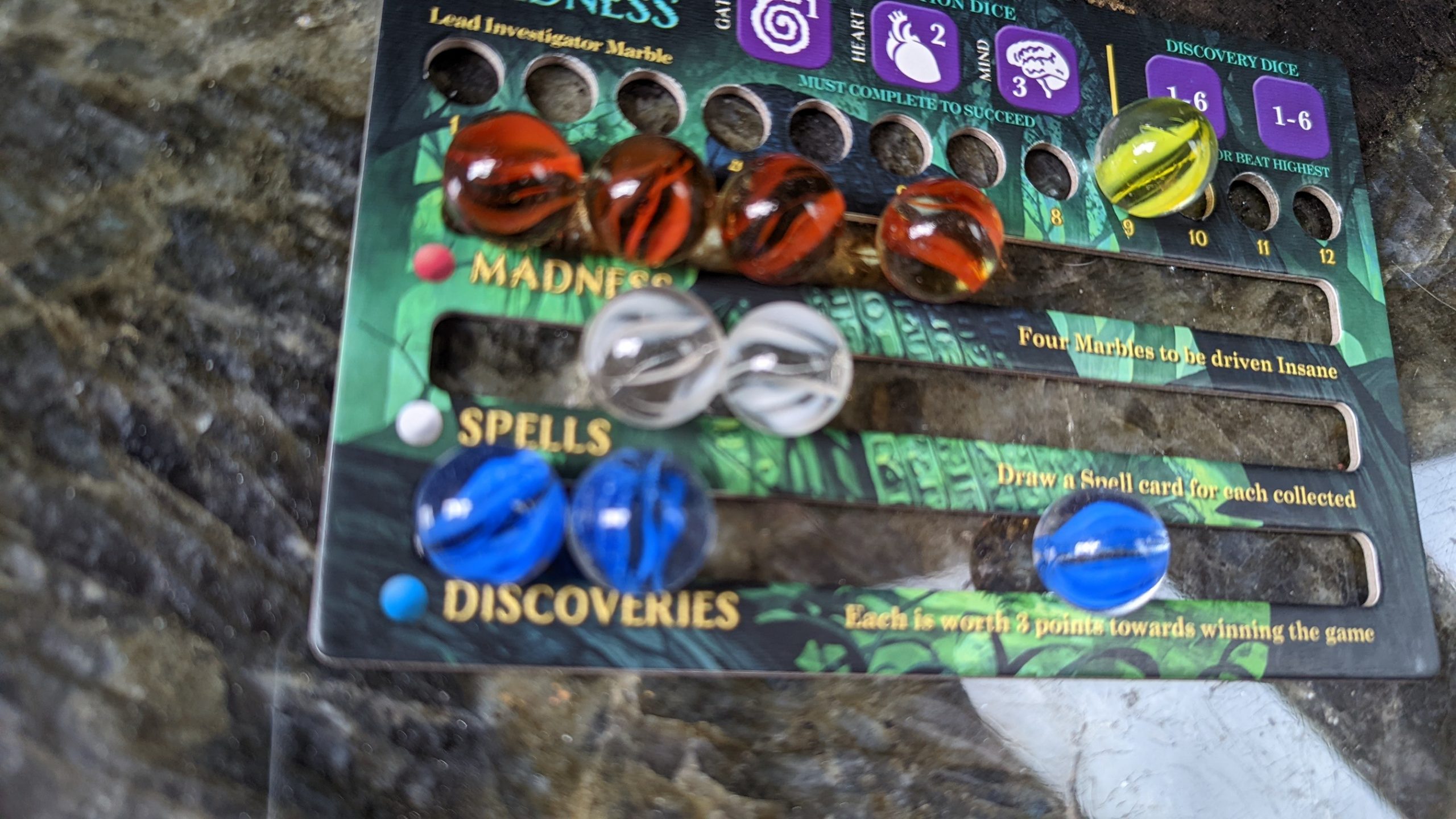 However, players who failed to accrue the aforementioned results must instead pull one of the tentacles out of the tower, potentially causing some marbles to fall. Fallen marbles have a bevy of effects depending upon their color, potentially giving players more victory points, powerful spells, or even adding to the Doom track, which signals the end of the game, but the most interesting result is adding to a player’s madness. Once a player accrues enough madness, they go insane and can no longer win the game through the traditional method of having the most victory points once the games location deck has been depleted. Instead, they stop rolling dice on their turn and simply pull tentacles out of the tower every turn in an attempt to cause enough doom marbles to fall to end the game, upon which that insane player wins.

I really like this implementation of an alternate victory condition, and wish it was used in more games. Although it isn’t specifically outlined in the rule book, one of the ways madness winds up working is that players who have fallen too far behind the leader can stop pursuing regular wins and instead- just immediately failing to lock in on their turn and pulling tentacles from the tower to try to drop enough red marbles to drive them insane and go for the insane doom victory. The stroke of genius here is that it gives players who were essentially out of the game and just going through the motions a fresh way to engage while still pursuing victory. Importantly, the math does work out where you are normally better off trying to go for the normal victory point win, so memeing and going for the insanity play on turn one isn’t an optimal strategy. 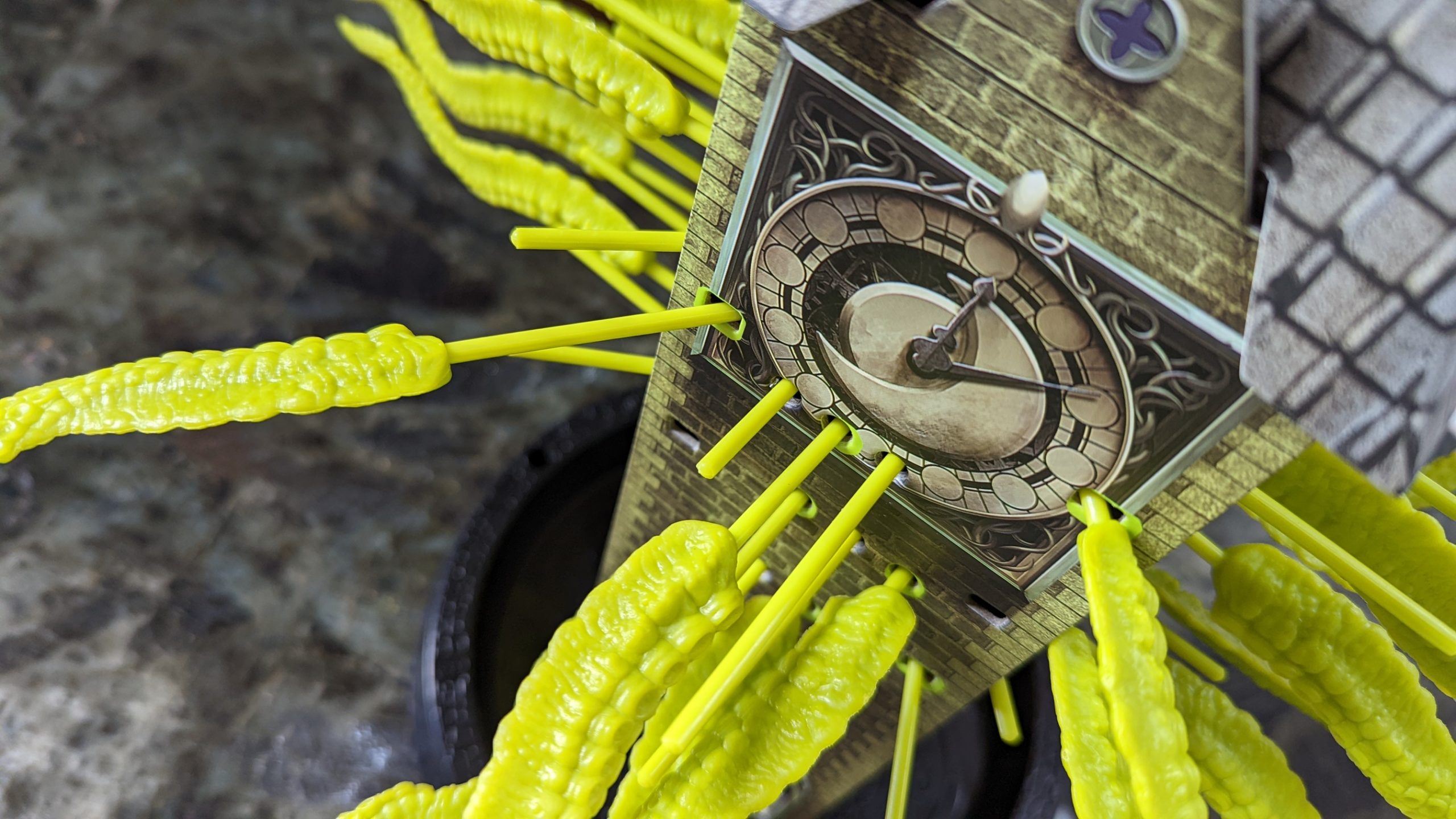 The uninitiated and heretical among you may find the setup of assembling the titular tower, threading the tentacle pins through the holes on its sides to create a catch, and pouring the marbles into the top to be a bit tedious, but those of us who were raised with these games know that this ritual is integral to the game. I bounced off The Fuzzies for its conical storage container that doubled as a setup aid, and stand in staunch opposition to people who use boxes to assemble their Jenga towers for the same reason. Every second spent painstakingly assembling the game, adds to the anticipation, and makes the destructive act of playing the game that much more rewarding.

You would be forgiven for mistaking Tower of Madness to be a Restoration Games title, as it does possess their trademark blend of nostalgia and modern game design. Unfortunately, it lacks the high production quality that pushes their games over the edge into greatness.

Nick grew up reading fantasy novels and board game rules for fun, so he accepted he was a dork at an early age. When he's not busy researching the intricacies of a hobby he'll never pick up, Nick can be caught attempting to either cook an edible meal or befriend local crows.
Related Articles: Tabletop, Tower of Madness
Share
Tweet
Share
Submit