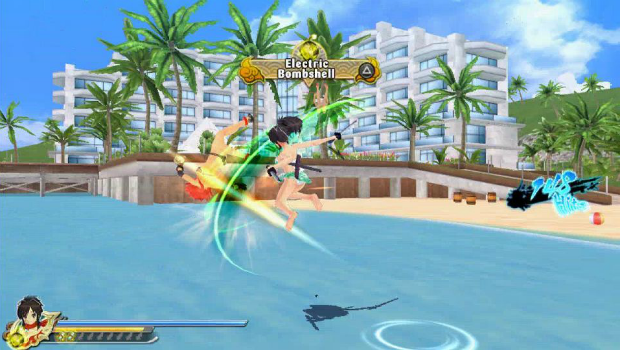 As far as it relates to consuming games, I’ve never been one to be a prude.  While others may find the sexualization of characters in video games to be beyond silly and perhaps a bit pathetic, I’ve always found it to be a nice addition to an otherwise sterile medium.  While others may have bemoaned the lack of fighting action in the DOA Xtreme Volleyball series, I found a great amount of enjoyment in the slightly subdued volleyball action accompanied by gratuitous fan service.

Then there is Senran Kagura Estival Versus.  Once viewed, played, taken in, and processed, Senran Kagura Estival Versus made me feel horrible for every digital titillation that I ever enjoyed, and exposed every single camera drag and push to try and get a more stimulating look I’d ever done in no uncertain terms. In the content of this game is the very center of scumbag void, the dark nougat of soulless objectification.

A beat ‘em up style game with a dynamic cast of characters, Senran Kagura Estival Versus is the story of some large-breasted women who are being hunted by other large-breasted women.  When I say large, I mean beyond the pale of large, into a realm of comic proportions.  Using the power of their contrasting infinite horniness and playful, child-like world outlook, the girls bond together to have fun, fight, and pander to the camera in the most demeaning ways possible.

The story of Senran Kagura tries to play heavily into serious tones, like the loss of loved ones and the sense of comradery and struggle against powers beyond your understanding. Yet it seems to lose all pretense of this when, like clockwork, the game is reminded that it needs to pander to your most banal and primitive instincts, in a way that foregoes any amount of taste or even build-up.

One of the most shining examples comes in literally the first minutes of the game’s story mode, as you see two shinobi sisters (clad in schoolgirl outfits with barely any skirt and no midriff to speak of) bringing flowers to their sister’s grave. In a heartfelt moment, they ponder their loss, and the constant struggle between life and death afforded to their position.

If any of that sounds like not your cup of tea, you might as well turn back here — cutscenes are skippable, but this sense of vapid, senseless pandering permeates through every inch of the game, from enemies having their clothes ripped away in combat to unlockable dress-up section, where you can even faux-kiss the girls after groping them incessantly and changing their clothes.

But how does the actual ninja combat play?  The answer to that question is unfortunately well.  Typically games that are nothing more than softcore fan service vehicles, such as the aforementioned DOA Xtreme Volleyball series, are also terrible.  Estival Versus is not at all a terrible action game, with decent fluid motions and tight responsiveness coming together to make a quite competent and interesting beat ‘em up experience.

The PlayStation 4 version runs like a dream, at a solid 60 fps and high resolution, with character models that are as overly detailed as you would expect from a title so focused on as many various angles of its polygonal pin-ups as possible. Backgrounds and props are less detailed, likely due to their secondary nature to the main attraction of the camera’s lens.

Senran Kagura Estival Versus on the PlayStation Vita is a slightly different (yet equally nauseating) experience to the PlayStation 4, with the touchscreen taking on several functions for camera use and battle tactics.  Battles are very crisp on the portable device, and the pace of play doesn’t suffer at all from the lesser format.  While the incredibly immature nature of the game’s tone is near impossible to ignore, if you can look past it, you’ll actually find yourself playing a game that offers a lot of easy and dynamic fight combos, and has a pretty decent mix of uniquely challenging enemies.

There is one particularly offensive, over-the-top aspect of the Vita version that can’t be ignored. When in battle, a special combo can be used to show you a close up of your own character’s cleavage.  This is an “entrance” mode for the game’s frenzy battle mode, where your character is stripped to their bra and panties, upping their offense in lieu of defense.

On the Vita, you activate this mode by zooming in on your character’s cleavage and then swiping left and right quickly on the screen.  In effect, this means you literally slap the characters breasts around violently until their clothes are ripped clean from their bodies, with your actual hands.  While I did this a few times for the sake of this review, I’ve never felt worse about the digital things I’ve done than I did with this.

Both versions are pretty good looking graphically, but it’s really more akin to the JRPG style of static characters on a static background for most cutscenes.  Nothing special, but nothing too offensive in terms of the actual outcome.  Music is fitting for the game, and sounds good coming through without being too repetitive.  It is almost tragic how well executed the technical side of this game is managed, because for all of its positive traits, the game is so repugnant with the content that it is difficult to spend more than 10-15 minutes at a time playing.

Senran Kagura Estival Versus is the softcore contents of a hidden folder on a 13 year old boy's computer sprung to action, the results being a competent hack and slash bout of violence starring inappropriate, large-breasted women. The game is a total mess at its best, and is just cringeworthy at its typical worst. The Vita version of Senran Kagura Estival Versus is a competent game that has a very similar feel to the PlayStation 4 version, and the game itself is fun despite the immature themes.  A portable version of this game seems unnecessary, and overall the game is not worth even a moment's time even from the most dedicated a hack-and-slash player.

Patrick Rost has been with Gaming Trend since 2013. At first focused on sports coverage, Patrick has gone on to cover a wide range of games and other products for the website. Outside of Gaming Trend, Patrick writes and records music, grinds perpetually in Elder Scrolls Online (PS4), and lives day to day with his two dogs, Bob and Stella.
Related Articles: Senran Kagura Estival Versus
Share
Tweet
Share
Submit