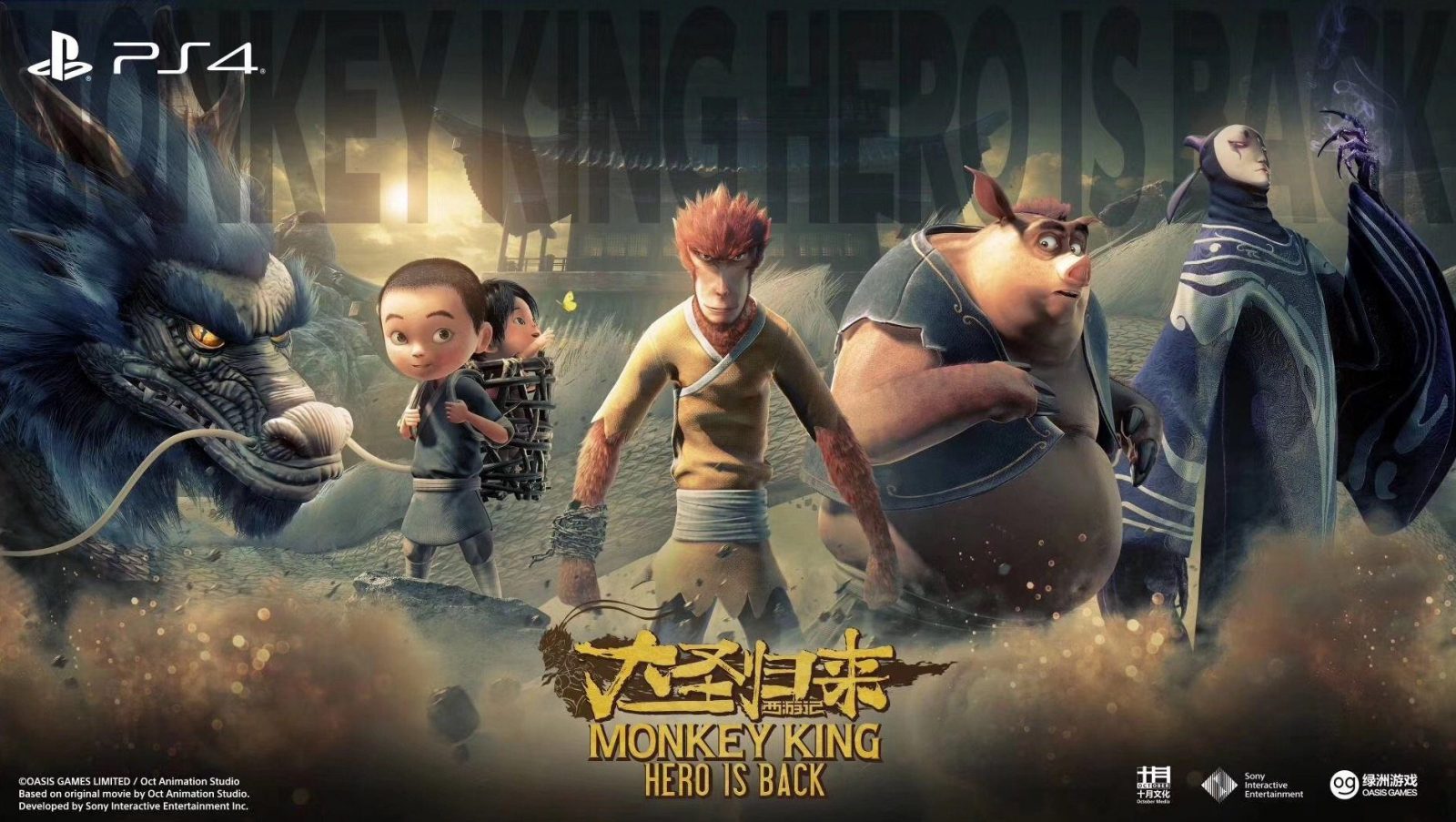 From the opening sequence, you are sucked into a world of mysticism and wonder. A world where a monkey was born with powers that even made the gods jealous sounds like an astounding story to build upon. Monkey King: Hero is Back is based off an animation, and in my opinion, is where it should have stayed. Unfortunately, the story and gameplay are two completely different experiences. You play as Dasheng, a monkey born from a magic rock, infused with the essence of magic and sky. Born of stone, he was revered as the king of all animals, but like all, he desired more power. Even challenging the gods, the Monkey King was revered as all powerful and only Buddha could put the Monkey King back in his place. Encased in a crystal tomb, there he was trapped for 500 years.

The game is heavily story driven, which is great when it inspires the gameplay, but there’s a lack of balance in this game. The game begins with a young boy, Liuer, and his sister, An An, exploring a cave when they find themselves surrounded by monsters. Growling and sounding like a kid with a bad cold, the monsters close in. Seriously, the voice overs and dialogue are horrible in the game. Often sounding like a broken record, enemies and fellow companions say the same lines over, and over, and over. Liuer falls back upon the crystal that entombs the Monkey King, setting him free from his magical shackles. Dasheng finds himself bound by a magic chain on his wrist, and throughout the game, you learn that completing good deeds will loosen the chain. Seeing that the boy needed help, Dasheng leaps into action with a Bruce Lee like stride to fight the mucus-colored monsters. 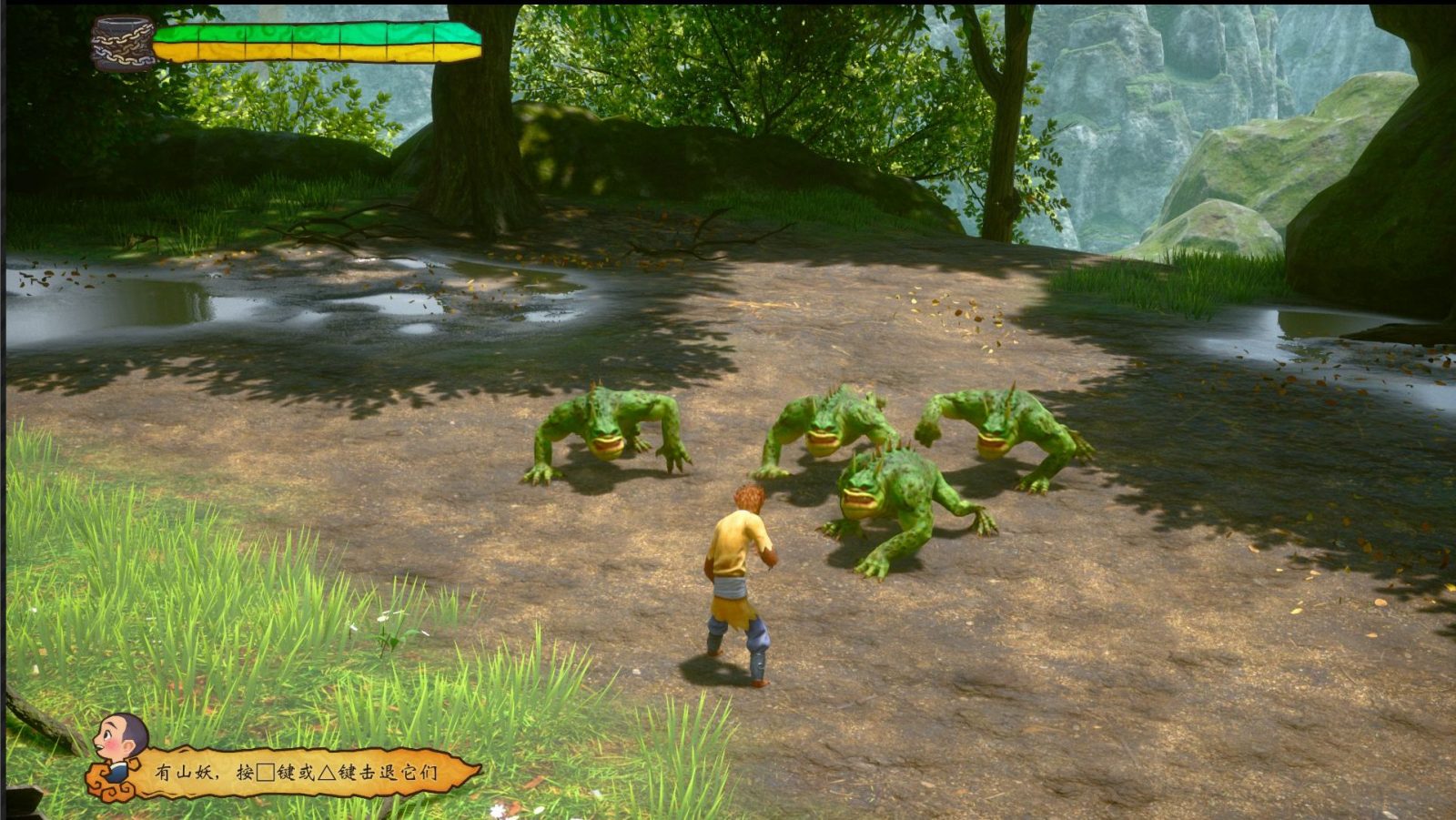 Not even backup can help them

Controlling Dasheng and moving about the world has to be the worst feeling I’ve ever experienced in gaming, ever.Moving the left thumb stick in any directions make Dasheng lurch forward in an unsettling way, and the camera oddly zooms in or take an absurd angle. It gets worse when you use your special abilities which make Dasheng faster, but more on that later. Confronted by three monsters, I thought I would have to outsmart them and keep them from flanking me, but the game did it for me. I literally stood in front of the monsters for five seconds before they attempted to strike me, and even then, it was so slow that I was able to move before it landed. The same is with Dasheng: With only a weak and strong attack, you’d think that his moves would be simple and precise, but because you can’t lock onto enemies and the camera is never in the right spot, hitting an enemy is a chore. His attacks are slow and don’t feel like they’re inspired by any form of martial arts.

As I easily defeated two of the three monsters, I attacked at the same time as the third and entered a quick time battle. This was a surprise as it gave a glimpse into what this game could have offered. Unfortunately, with only having to press one button, I easily defeated the third monster. It’s moments like this that made me believe that HEXADRIVE Inc., the developer, wanted to do more with the game but were restrained. The quick time attack felt like something that was in the acclaimed Spider-Man game yet felt so out of place when compared to the other fighting mechanics. The game lacks refinement and attention to detail in the world, story, and gameplay – and that’s made apparent the more you play. 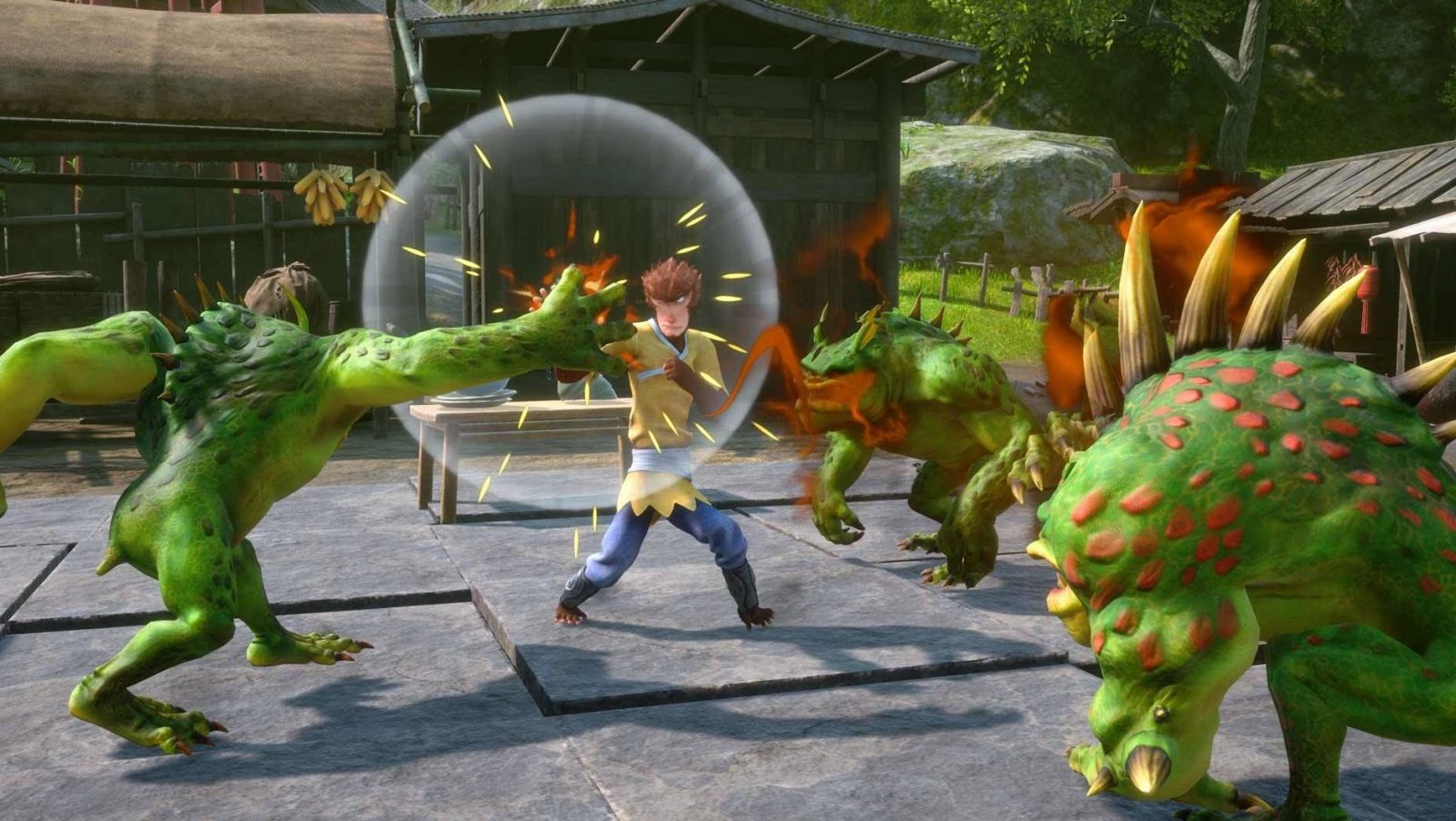 After dispelling the booger-colored creatures, I was forced to walk through a cave at the pace the game saw fit. As you play, the game likes to take control of the pace and force you to walk extremely slow so that it can catch you up on the story. I don’t understand why this can’t be done as you explore the world and collect items. This is frustrating and completely takes you out of the experience. At one point, I was forced to walk at a snail’s pace for almost two minutes while listening to Liuer tell me about his town. Once outside, the world is a beautiful yet static environment, as there’s not much to interact with. A simple stool to use as a weapon, a rock to throw, and a vase to break while looking for items to make health and magic elixirs, and that’s it. The world isn’t open but there are some areas to explore and discover items of interest.

With there being no run button and the normal pace of Dasheng is horrifically slow, I found myself strictly exploring in the beginning of the game and sticking to the beaten path in the latter stages. Throughout the world, there’s plenty of items to collect but they mostly do the same thing. You might collect five or six different plants, but they are all used for magic and health elixirs for weak, medium, or large amounts of elixir. Now that I was out in the world, I got to experience the bane of all games: loading. As you explore the world, the game must load every area you enter. If you opt to climb a ladder to explore the top of a lookout, the game must load. Want to look in a hole, open a door, or climb a few steps, loading. I even had to load into an area that if I had taken a different path, it wouldn’t load, but because I went through a house, it had to load me into the house and into that new area. It feels much like an OG Xbox or PS2 game in this regard. 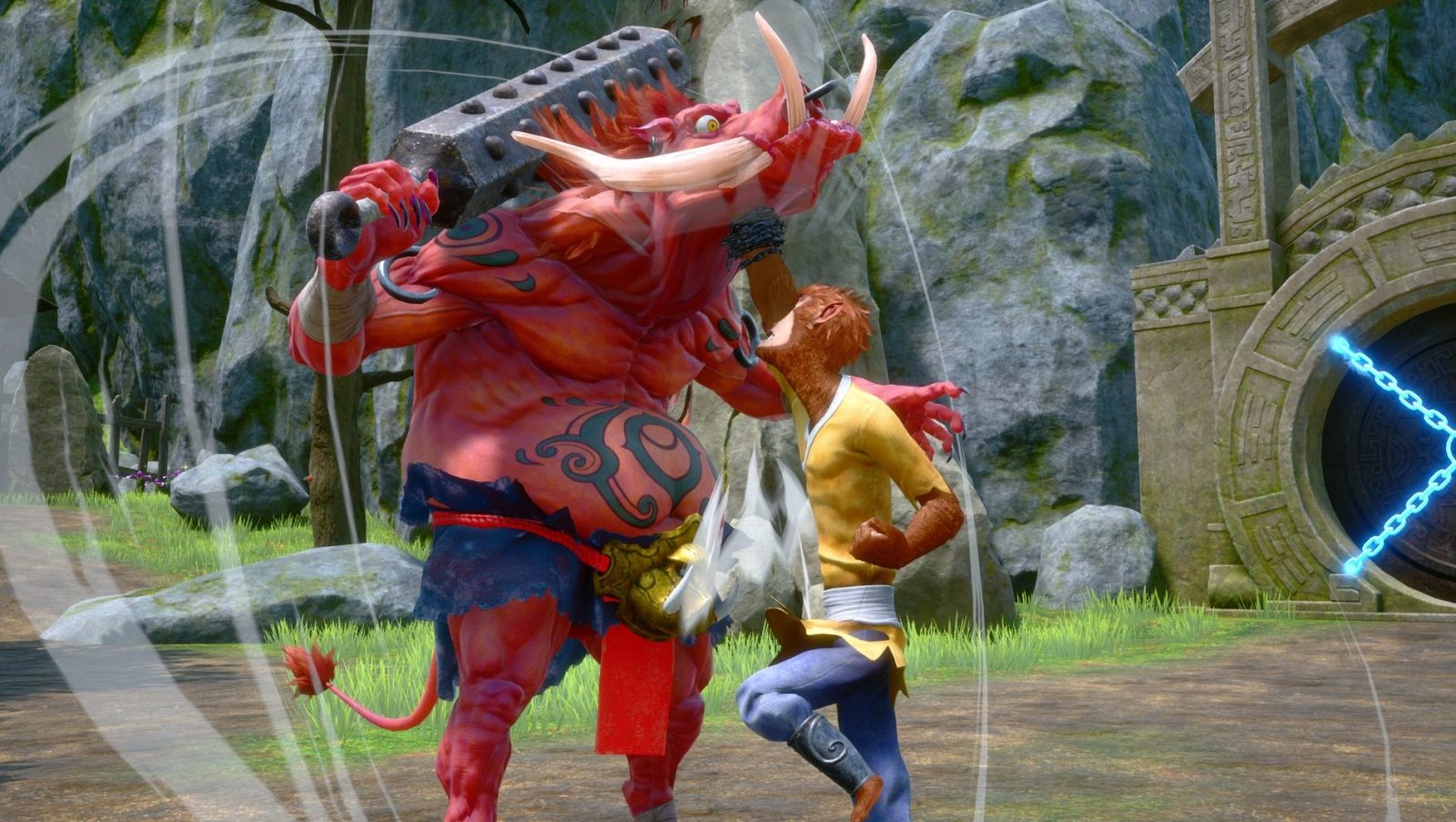 King of the jungle

After encountering some enemies that were considered bosses and finishing them with a brilliant animation, I was able to level up my attacks, health, and special moves using mobile stores that appear in new areas. The ability to level up your health and magic is done by collecting tiny gods hidden throughout the world. Think collecting Korok seeds in Breath of the Wild. Selling plants, insects, and other items in the world are done at Madame Hare’s shop. Here you can make health and magic elixirs and other items to benefit your survival. I didn’t use the shop often because the difficulty of the enemies never challenged me. I will admit, the leveling up process is simple and to the point. Some of the abilities come in handy, like seeing the weak points of your enemies. But some are so useless that it’s not worth leveling up. There’s one where you run around on all fours, striking harder and running faster, but the controls feel like you’re racing a car on an ice rink with bald tires, and you’ll never be able to hit the enemy.

Much of the game is a fetch-quest: Find a key and unlock a door, then do it again in the next area. I never felt like the game was progressing towards an ultimate goal, nor did it give me the satisfaction that I was succeeding. With the game needing to load every change of location, it’s hard to get into a rhythm of the game.  Even Dasheng barely had anything to say in the game. I’m sure if he could, he’d say, “Please end my misery.” You mostly listen to Liuer ramble on saying the same sentences over and over. If I wanted to listen to a story with little gameplay, I’d simply watch the animation.

Monkey King: Hero is Back

These are one of those times when games are simply made to capitalize on the license of an intellectual property. Though there is a lot of potential in the story for the gameplay and mechanics to flesh out, it never does. There are moments when you believe there’s something special to experience, but then you’re constantly loading into areas, slowed to a snail’s pace, and burdened with unnecessary banter.

T. Keith Hale is a game writer by day and gamer all the time. He brings this same passion to Gaming Trend when reviewing games and covering new gaming stories. He's also a framerate trollop.
Related Articles: Monkey King: Hero is Back
Share
Tweet
Share
Submit