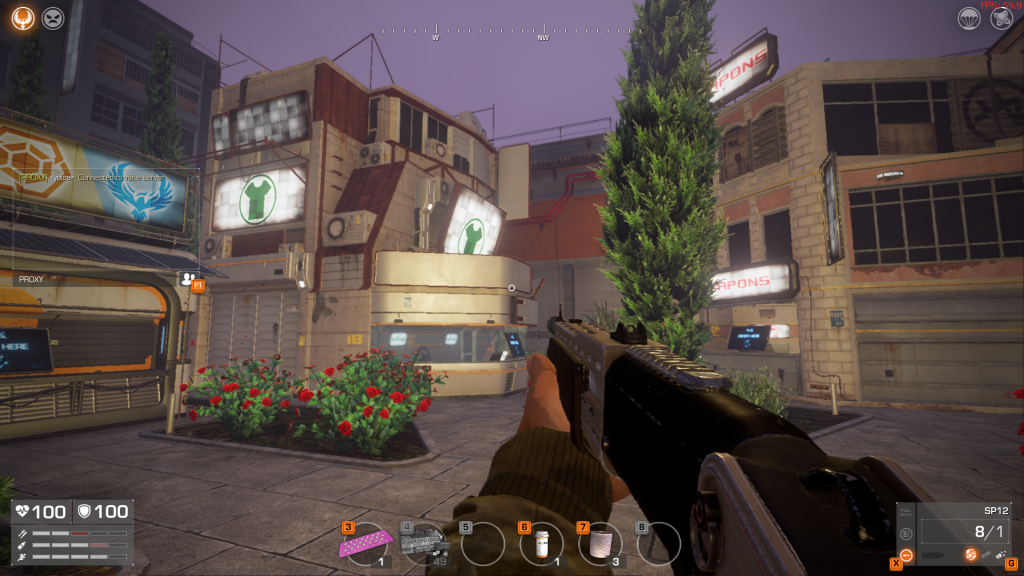 Reading the Steam store description of Shattered Skies is an enjoyable experience, like laying down money for a Powerball lottery ticket when the prize pool has kicked into nine-digit territory. Full-loot PVP in an open-world FPS game? With crafting, dynamic PVE-PVP objectives and skill progression? For a certain subspecies of gamer, words like that invoke a brief hypnotic haze studded with a mix of euphoria and adrenaline. Even now, just reading those polished, bullet-pointed paragraphs is enough to trigger something euphoric in me, and – just like with the Powerball tickets – imagination is enough to propel me to blow some time or money to see if the dream will become reality. In both cases the ultimate result of biting the bait is often a whole lot of muttering expletives while staring at a monitor with disappointment. Sadly, Shattered Skies isn’t bucking that trend.

So what kind of a story is behind Shattered Skies? First, it takes place on earth shortly after some kind of worldwide disaster which involves an exploding moon, valuable ore landing all over the earth, and violent aliens showing up to kill anyone who gets too close to the precious loot that now dots the landscape. On top of it all there’s a split of three factions each vying for control in the aftermath of the calamity. With those basic details in mind, let me assure you: no one cares about the story in Shattered Skies. Not me, not any of the players I ran into, and as near as I can tell, not even the developers themselves. More than in most games of its type, the story of Shattered Skies primarily serves as a way to give some basic contextualization to the gameplay experience, along with a little bit of art direction to their artists and developers. “Aliens, guns, modern day earth. No elves! No magic wands!” I can picture that written on a dry-erase board over at Free Reign Entertainment, keeping its content creators in line.

Just because aliens are invading doesn’t mean we can’t plant some nice roses in our shantytown!

Before jumping into the game, I made sure to skip through the official ‘How-to-play’ gameplay video that is prominently shoved into the player’s face early into the experience. Right away that struck me as a bad sign: if it’s of the utmost importance to watch a video tutorial, that generally means the game itself lacks a tutorial experience, and that in turn always raises a red flag that a developer is phoning it in. That goes double when we’re talking about an FPS game, which is not supposed to be the most cerebral of genres out there, especially at the newbie level. Still, instinct has led me down the wrong path before, so I made sure to shake that thought out of my mind and just take in the details. Manage my food and drink bars, check. Refill containers at water wells, check. Hotbars, check. The basics were covered, and on I went into the world.

Shattered Skies’ environment can largely be summed up as ‘Urban hellhole with suspicious empty forests’. I’m running the game on an Nvidia 980Ti with the settings boosted up, and while I can say that all of the trees and rocks looked appropriately tree- and rock-like, nothing really stood out to me as impressive. Nothing was particularly jarring, but nothing was amazing either. The relative emptiness of the world was the second thing I noticed, and I’m not necessarily talking about the number of players on the server here. Forests are empty of life other than other human players, save for a stray alien here and there. The outcroppings of urban decay are the same. While Shattered Skies does take place after some worldwide calamity with a PVP-centric focus, the choice of a heavily outdoor-based map ends up conveying a weird feeling, with the relative lifelessness of the environment being striking. It’s not a good kind of ‘eerie feeling’ either: for me, it mostly made me feel as if the game was suspiciously undone, something that stumbled its way out of early access before its time, with plans for adding deer and rabbits and bears coming somewhere down the line.

Okay, but what does he do with the starlight coin? Answer me that.

During my initial exploration time, my food and drink bars started to decay – so it was time for me to start scrounging around for supplies. This mostly means scavenging in the urban areas marked plainly on the map. Finding loot is pretty easy: check inside every rusted out and abandoned vehicle for 1 piece of loot of some kind or another. Check every bed, look on top of every trash heap. Predictable, reliable, no need to get too creative in your search attempts. On the other hand, the actual loot distributed in this way is noticeably suspicious, and it’s not unusual to ransack some warehouse and come across an abundance of guns and ammo, but not much food. I scarfed down some bag of junk food – pretzels, I think – and noticed that it had the effect of filling my health bar, but lowering my thirst bar. Points for detail on that front.

After filling my backpack with guns, ammo, pills, gauze, food and drink, I stumbled onto another player – and by reflex immediately shot them in the head. “I’m sorry!” I called out. “I’m new to this game, that was an accident! Come back!” I realized later that this was probably the exact line most PVPers in the game use when they fail to bag some prey, so no go – the player never came back, and I was back to exploring around and looking for trouble to get into. Eventually, all my poking around in some abandoned warehouse led to an alien spawning on nearby and… promptly getting stuck on the terrain. It just leered at me menacingly with its head neatly wedged against the corner of a dumpster, unable to do much more than make pained sounds as I repeatedly pumped shotgun shells into it until it was dead. The next alien was a bit more active, trying to melee me to death while I kept running away or backing off while headshotting it to death. After that kill, I searched around and found the treasure chest I can only assume it was guarding, being told that it would be unlocked for looting in about an hour.

If you can make a tasty apple pie out of a green apple and a loaf of bread you are some kind of culinary sorcerer.

The fact that I just described what were the highlights of my experience with Shattered Skies should hint at the problem here: it feels unfinished on the one hand, and underpopulated on the other. The game’s steam forums speak of the dev teams not being quick enough to purge itself of cheaters early on, but those aren’t claims I can verify one way or the other. What I can verify is that this doesn’t feel like a game that has much of a point or a payoff when playing solo, but which seems to lack the population to carry it on its promised PVP terms. That creates a dangerous situation for a PVP game where population is the key to life, but said population is also distributed across a variety of servers. There’s not enough meat to the experience to quality it as a meaningfully PVE game, but without PVE to draw people in during downtime, it’s hard to get enough players on for PVP to spontaneously happen. The fact that Free Reign Entertainment has been dutifully patching and adding to the game on a regular basis since launch is nice, but it doesn’t seem to be doing the trick right now – content roadmap or not.

And that’s the unfortunate state of Shattered Skies right now. On paper, it’s heaven, or at least Valhalla – close enough. In practice, it feels almost like Valhalla’s tech demo. With no PVE aspect engaging enough to keep players interacting with and a population that seems too low to make spontaneous fun a reality, Shattered Skies is in an iffy state. The best that can be said is that the developers seem committed enough to the project to possibly turn it into something more desirable down the line, but for now, Shattered Skies is a game to keep an eye on from afar at best.

While offering a set of promises that would make any trigger-happy PVP addict excited, Shattered Skies fails to deliver a reason to keep coming back. While the concept sounds fun, the execution thus far has yielded a relatively lifeless world with a by-now stagnating population. Time will tell if the developers can shape their game into something more engaging post-launch.

Victor Grunn has been a gamer since the days of single-button joysticks and the Atari 800XL. When not lamenting the loss of the Ultima series or setting people on fire in Team Fortress 2, he's an aspiring indie game developer and freelance writer.
Related Articles: Shattered Skies
Share
Tweet
Share
Submit